Bubbles and dragons and friends, oh my!

After nearly a decade-long absence, the Bubble Bobble franchise makes its grand return on Nintendo Switch. This time, however, the focus is on multiplayer, as the title’s double entendre suggests. Four players can simultaneously play classic Bubble Bobble’s brand of action-platforming. Unfortunately, the addition of four-player multiplayer seems to have come at the cost of the amount of content present in this package. 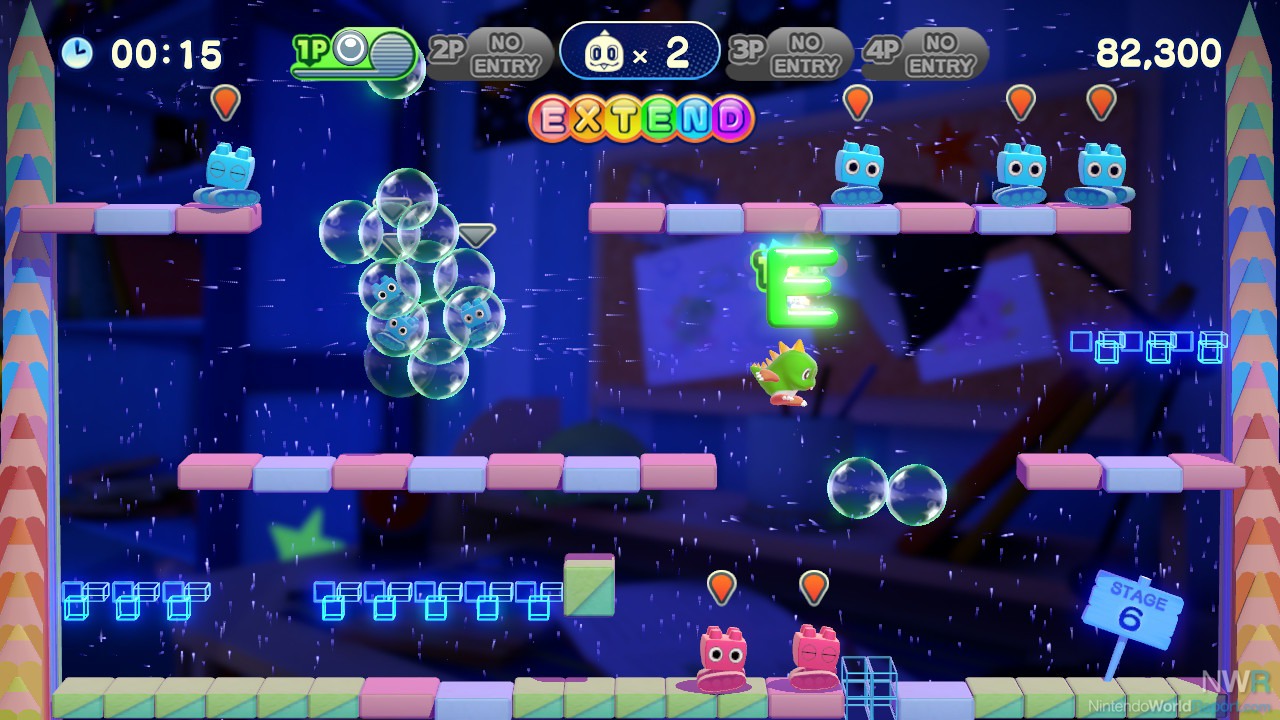 In terms of presentation, Bubble Bobble 4 Friends looks like a natural evolution of the classic pixel style. Adopting a toy theme, everything in the world has a simple, yet charming look to it. None of the enemies, including the bosses, look particularly threatening, but they fit the aesthetic of being children’s toys. Overall, the presentation is solid and fits the atmosphere of the game quite well. However, the same cannot be said about the music. Each set of levels has its own song that plays while you’re in the level. While the compositions are fine on their own, there may be times where the same song could play for upwards of ten minutes on end. This becomes grating very quickly, especially when you’re on some of the more difficult levels. 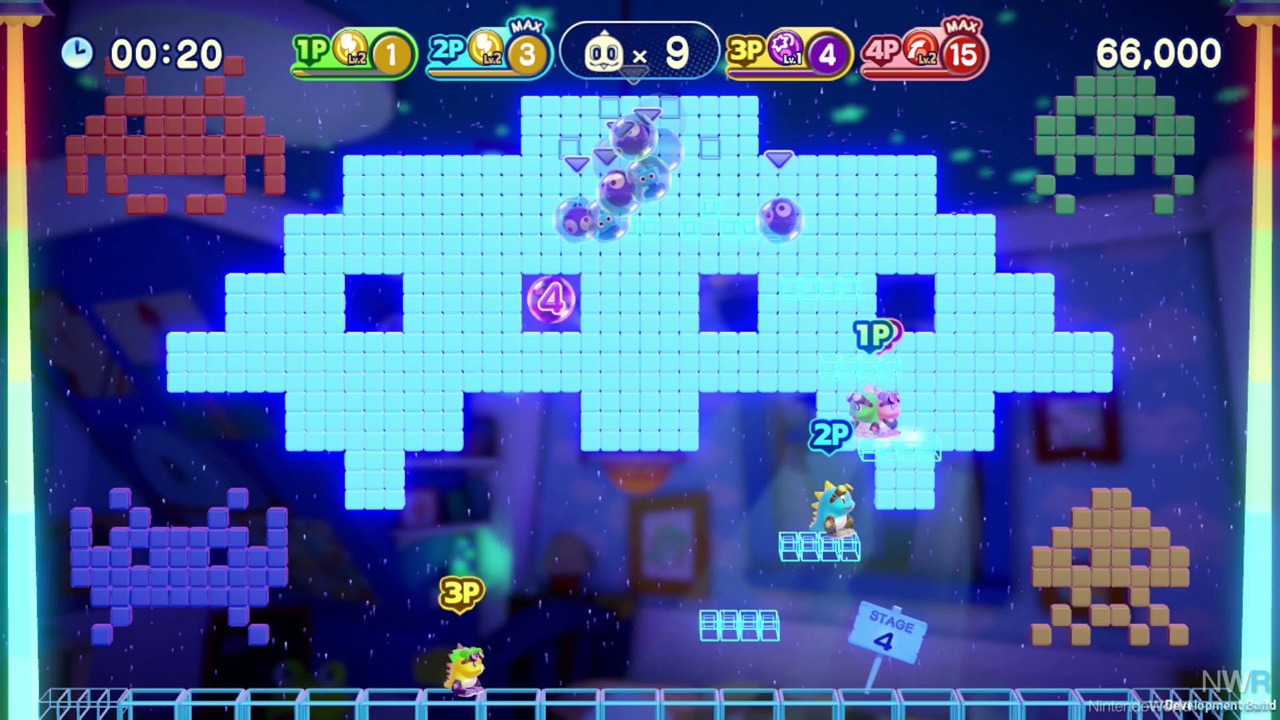 The gameplay of Bubble Bobble 4 Friends will be very familiar to those who know the series. You and up to three others play as dragons who jump around and blow bubbles. The goal of each level is to encapsulate all the enemies on screen in bubbles, which then need to be popped by the spines on your back or a well timed ground slam. Once all the enemies are defeated, fruit will appear that you can collect to increase your score. Each level can be played with up to four players and, while the option was nice, I found playing single player was much easier to manage. Getting a game over will only result in losing points, so newcomers won’t be overly intimidated by some of the harder aspects of the gameplay. To spice things up a bit, there are different power-up outfits that can be unlocked and selected at the beginning of a set of levels. These can range from giving you a longer bubble shooting range or stopping the wind that blows your bubbles. Interestingly, the number of times you can use said powers per level can be upgraded by collecting the letters of EXTEND hidden in each set of levels. By collecting them all, your uses will increase by an average of five, giving you an incentive to collect all the letters whenever you can. 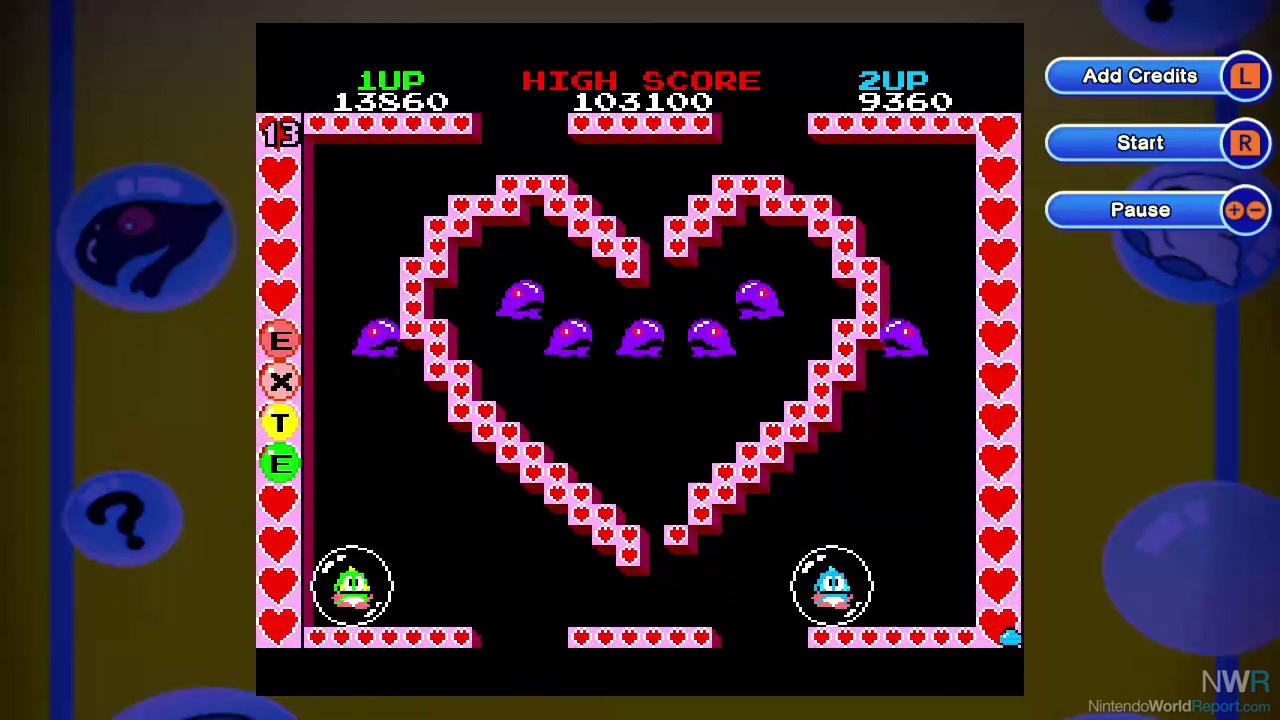 Each of the levels of Bubble Bobble 4 Friends is extremely well crafted and feels like it could have been taken straight from the original games. The addition of cameos, like classic Bub and Bob sprites or Space Invaders aliens, in the background were also great touches.The only exception to the stellar design is the bosses, which are extremely underwhelming and feel like copy-pastes of one another, with the exception of the final boss. Furthermore, what’s even less appealing is the amount of content in the game. There are only five level sets, each with ten consecutive levels, totalling only 50 unique levels in the game. There is the addition of a hard mode version for each of the levels available, but this does little besides remixing the order of the levels and increasing the aggressiveness of enemies. On the plus side, the entirety of the original Bubble Bobble arcade game is included in this package. This does add to the overall value, but when the original arcade release has more for you to do than the new game, it comes off as a disappointment.

Overall, Bubble Bobble 4 Friends is a great time but is lacking in content. From start to finish, the classic Bubble Bobble gameplay was a joy and return to form. However, only fifty new levels and the original arcade release left me feeling like there should have been much more included. For veterans of the Bubble Bobble series, this is a worthy follow up to the classics. For newcomers, the accessibility options, like the lack of a serious penalty for dying, make this one of the easiest places in the series to jump in. If you don’t mind the light amount of content, Bubble Bobble 4 Friends is an excellent pickup.