Zen Studios is usually known for their high quality digital interpretations of pinball, but they’ve had success in the past when they branched out to tower defense with 2013 Wii U release CastleStorm. In 2019, they self-published Operencia: The Stolen Sun for PC and Xbox, a first attempt at creating an RPG for the studio. Operencia hit the Switch a few months later, and it’s a solid port of a fine game that lives up to Zen’s pedigree.

There is a defined party in Operencia, though it is led by a character that you have to create. There are eight different designs of character—four male, four female—and three different classes (Warrior, Mage, and Hunter) to choose from. Most of the world exploration and all of the combat is from a first-person perspective, though your character’s design will be visible when story explanations are required along with the six teammates that eventually join you. These can come in the form of brief chats while exploring or extended conversations around the campfires in the world that also serve as saving and healing points for the party. The world is divided into a grid similar to what is seen in the classic Wizardry series of RPGs, though for most Nintendo players the closest comparison would be Atlus’s Etrian Odyssey series. A map is always on screen that fills in as you walk; there is even an ingame achievement for disabling the automap for an entire playthrough. Movement itself is confined to the four cardinal directions with the ability to strafe. There are treasures scattered around the environment, some of which are in chests that can require keys, while smaller items like the keys and the firewood used for saving is loose on the floor.

Each area you explore will have a fixed number of combat encounters caused by enemies that roam the world map. It’s possible to ambush the enemy and guarantee the first attack, but the enemies can also ambush your party. The battles are turn-based, with the order of attacking determined by who has the highest “initiative” statistic at that point in the battle. Although you’ll end up with a total party of seven, you can only have four appear in battle at once with the campfires also serving as the swapping point. Each party member has two basic attacks and can unlock skills in combat as well as statistical buffs as they get experience: blessedly, all party members get the same experience regardless of whether or not they participate. The extra skills, such as healing and elemental damage, run on a combination of skill points and a cooldown system that makes battles tougher because it’s not possible to spam high powered attacks or healing every round regardless of whether you have the skill points. There’s no free healing after combat in Operencia unless a character levels up, at which point they get set to maximum HP and skill points. Experience is also earned for completing quests, which mostly makes up for the general inability to grind the party out of trouble. 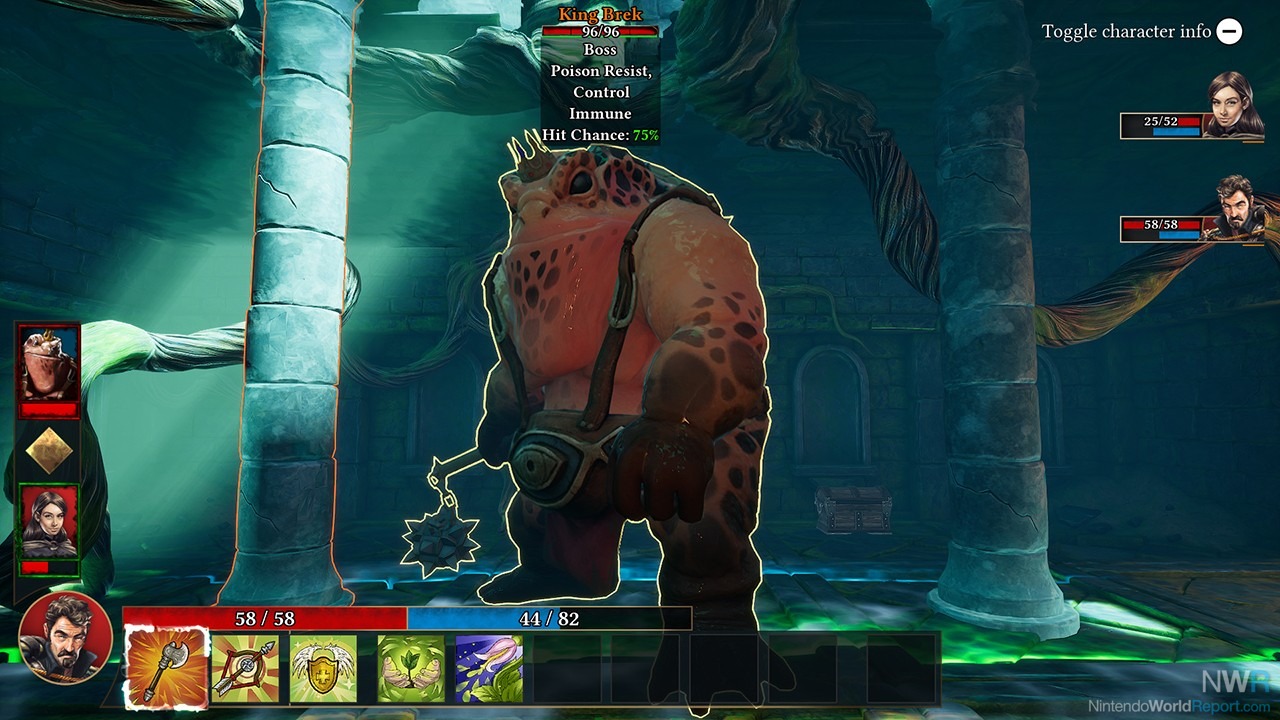 When the prince(ss) kisses the frog and it goes horribly wrong.

The storyline of Operencia is a basic one. The created character is originally assigned to rescue maidens from a sunken palace, but eventually discovers that the sun has stopped shining on the land and it’s their job to get it moving again. This will naturally require ascending from the “Lower World” to a “Middle World” and eventually to the gods themselves to find out what’s going on. Interestingly, it’s not the main story that shines in Operencia; it’s the interactions between your party members that steal the show and drive the plot forward. And it’s not just the main character who gets needled; everyone gives and receives barbs in equal measure throughout the adventure. Since most of the scenes happen at campfires, I was always a little disappointed when I would find a new one and not get a new cutscene to explain the world, or just bust the nuts of one of the haughtier men in my party. Even the end of battle scenes can be quite entertaining, as I never really got tired of someone saying to the character I named “You know, I never quite got your name”.

On a technical level, Operencia is a solid version of the game when playing docked. I did find that a Switch Lite screen made some of the text a little difficult to read at times, but as something initially designed for consoles or extremely high-resolution PC monitors I wasn’t surprised. It also wasn’t immediately obvious as to how to actually apply the stat boosts upon getting a level up, as the character growth menus on Switch are tied to hitting up on the d-pad/directional buttons and then hitting the shoulder buttons to move through the character menu. No matter how I played though, there were noticeable load times when booting the game and when transitioning to a new area; thankfully, the latter doesn’t happen all that often, but it was particularly noticeable in the transitions after the third chapter because the second chapter technically isn’t completed until after chapter 3 is. Graphically the game holds up fine, and the music is solid medieval fare with some fairly satisfying sound effects when good things happen in combat.

Operencia differs from a lot of the dungeon crawlers on Switch: it’s more of a low fantasy story, and its fixed story and chapters helps to differentiate it from the dozens of roguelikes and roguelites we’ve seen in the past few years. For that alone, Operencia: The Stolen Sun is worth a long look.