I’ve waited patiently for Nintendo to release a follow-up to the Wii Sports series – the last game that drew in everyone in my family from siblings to grandparents to play with its approachability and novelty in motion-controlled sports. Strike! Ten Pin Bowling is a port of an iOS title, isn’t the first bowling game on Switch, nor is it the first motion-controlled option. But as someone whose family always eventually went back to bowling after trying the slate of Wii Sports options, the question is whether this title scratches that same itch well-enough to recommend. 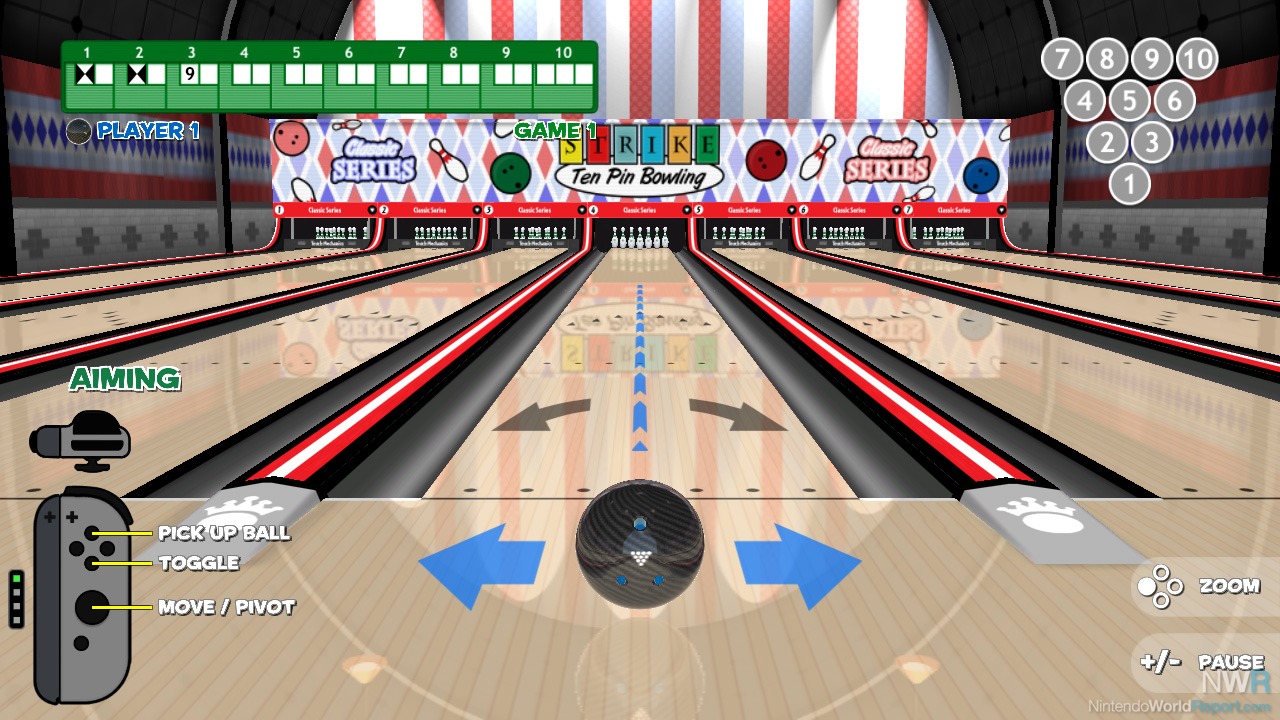 Flinging a ball down the lane will feel mostly familiar if you’re a Wiimote vet. Setting position and angle is easy with the Joy-Con stick. Once in position and with one Joy-Con in hand, holding the X button picks up the ball, motion your arm backward, then as you reach the right point in your arm’s return arc forward hitting the ZR button to let it loose. Putting some English on the ball requires a twist of the wrist at release if you like more spice in your 10-pin game. If motion-controls isn’t your cup of tea, handheld play is still an option. Holding the Switch vertically, placing a finger against the screen picks-up the ball. While holding the ball, swiping left or right before throwing adds spin to the release. Checking against the (free) iOS app version, it largely matches the experience there. In most cases, it works as advertised – frames zip by in seconds when you get in a rhythm, and while some throws didn’t feel they went where I expected them to, the same could also be said of Wii bowling. The ultimate test is whether I could play with my kids. My 7-year-old loves Wii Sports, so I thought this would be a great way to see if my initial impressions met his. Below are the chain of events that occurred:

Shockingly, having to press an extra button to release the ball was enough to defeat my son after trying to help him understand how to play. He doesn’t play video games all the time but has enough familiarity where it took me by surprise. Something to consider for parents or those looking for a bowling experience that’s the most accessible.

Time, place, and presentation matters in context of Strike! Ten Pin Bowling. Wii Sports was attached as a hot selling point to the Wii as a fresh new device and novel way to play at the time. Miis with their customizable faces and reactions when dropping a ball added a lot of personality this title is missing. Strike! Ten Pin Bowling has none of that going for it, and while it ticks off a lot of the same boxes you’d look for in a pick-up-and-play bowling game to share with family, the lack of character and slightly more complex controls prevented it from catching fire in my home. It’s a completely serviceable bowling experience, but one that doesn’t reach the heights of its predecessors.