We All Fall Down.

Not Tonight, a game developed by British studio PanicBarn about a post-Brexit dystopian future, has arrived to provide an interactive storytelling and work simulation experience from the perspective of some who have been living in it. People of European heritage living in Great Britain have been corralled into a set of slums where the community is kept prior to being deported unless able to scrounge enough money to pay-off the government controlled by the Albion First party from doing so. Either by doing gig economy jobs as a bouncer or engaging in less legal methods, the objective is to play through the story and balance the various demands of survival. 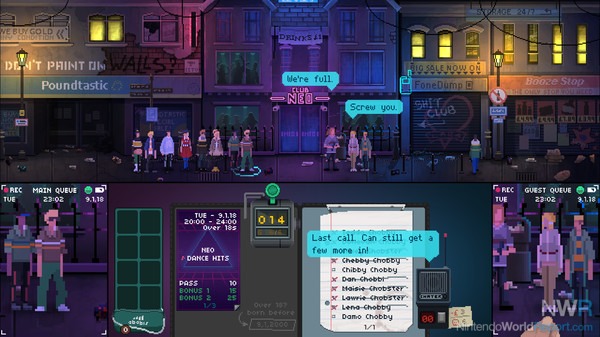 Gameplay is structured in calendar days – wake up, check a screen-shattered phone for job opportunities via the Bouncr app, then arrive at the venue to work. The owner advises who is allowed that night, then shooing you out front to tend the queue. Potential patrons arrive to be vetted with the right credentials or be denied entry. Let in too many that don’t qualify, pay is severely docked. Too many more than that, and the establishment shuts down, a night wasted with nothing to show for it. If you successfully complete a shift three times at one venue, the manager makes you head bouncer – doubling pay and offering an item which can open new character arcs or other benefits. Each night of work is tense enough to be satisfying when you squeak by, especially if you can sneak enough bribes without losing a paycheck.

The overarching story is one of individual and structural discrimination, creeping authoritarianism, and whether you can scrape by in an unjust society without compromising what you know is right and just. As it accumulates power, the Albion First party beats a constant drum of fear and other-ism towards non-Britons through press releases and mailers. Immigration officer Jupp condescendingly refers to you only as “#112”, eager to remove your personhood, taking advantage of your plight and forcing work via coercion to better his station in life. The resistance wants you to balance making enough to live with letting in Euros and resistance members into clubs. If you compromise your well-being enough to help them, will they liberate you? If you do as Officer Jupp demands, will you be spared, or be the last against the wall? 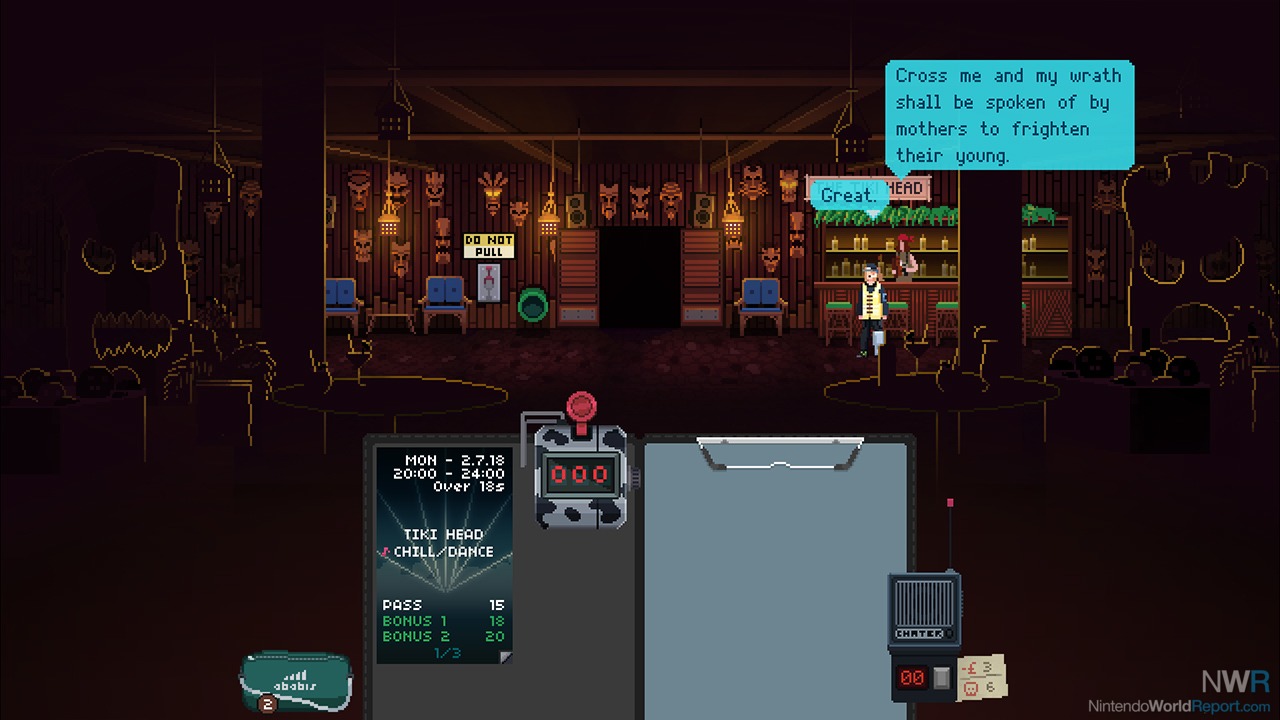 Those you work for have varying ranges of prejudice. Dave (the first pub owner) makes a derisive comment about Europeans, in the same breath stating “not like you, you’re one of the good ones”. Later club owners are more overt, calling you Euro trash, lamenting how you’re taking good jobs away from hard-working Britons and accepting a Euro is the only affordable option they had for a bouncer. The resistance members intermittently communicate with plans to overthrow the Albion First regime, assigning minor tasks but keeping their plans close to their vest. Are they true freedom fighters, or using you like officer Jupp does for their own ends? Other Europeans in the same block of living quarters commiserate about the circumstances, without a clue of how to proceed. How long can they last in this dehumanizing state?

Each day is not just an increase to the game’s difficulty, but a test of character. What starts as benign (checking IDs at club doors for age and expiration date) creeps into unsavory denying entry to those who are of European descent, who have traveled to European nations, or have low “social credit scores”. Not Tonight’s greatest trick is forcing choices with a shock factor to start that slowly dulls until considering the complicity of your actions becomes an afterthought. Eventually the NHS is privatized, adding healthcare bills to your debts and wellness as a new measure needing monitored. Calendar days and ratcheting-up pressures to survive are done deliberately to press the feeling of malaise but might be overindulgent in a way that hurts pacing. There are times where completing another day feels like straight-up work, which might be immersive but at the sacrifice of fun later on.

Not Tonight is the video game equivalent of a protest song – a piece the artist releases to the world with the intent to elevate a social movement or perceived injustice. I suspect the story will act as a Rorschach test of your political alignment depending on whether you love or hate it. Some could critique it as being too on the nose, but the lack of subtlety feels genuine in this moment. I don’t have enough of a personal insight into Brexit to know whether this is an accurate portrayal of Great Britain’s current trajectory. Nevertheless, as an American I’ve been firsthand witness to enough radical injustices, prejudiced speech, and discrimination toward the least well-off among us to make what I’ve played believable, and to me that makes it a success in immersive storytelling.