A great foundation for a lacking game

With the Switch being a haven for multiplayer party games, it is only natural for some indie developers to attempt to throw their hat into the ring. Released in 2013, DoubleDutch Games attempted to bring a new spin to both the racing and platforming genres. Unfortunately, what Speedrunners has in terms of a strong foundation cannot make up for the lack of content. 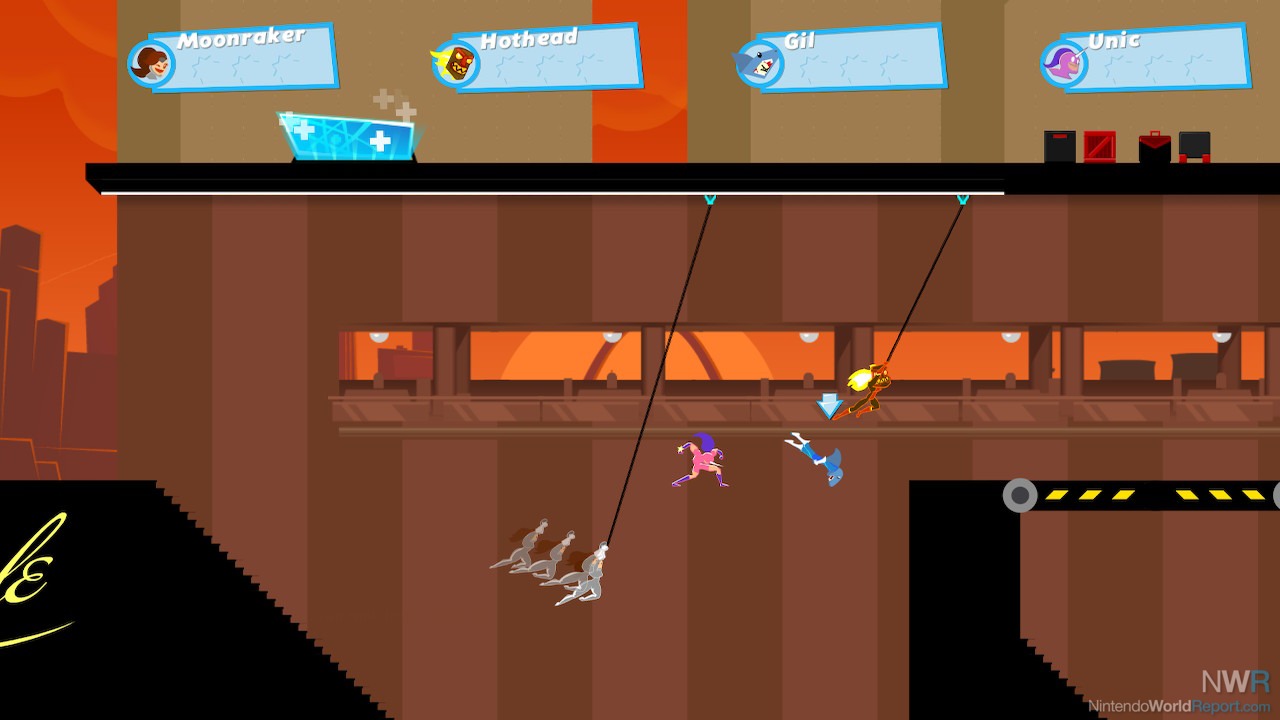 The story puts the player in the shoes of a superhero who is attempting to stop crime around their city. However, as more and more superheroes try to gain the spotlight, it becomes a race to see which hero can be the fastest to stop crime. The simple premise of the story was appreciated, with the extra bits of lore for each character going a long way towards fleshing out the world around you. In terms of presentation, Speedrunners tries to mimic its comic book influence by adopting a simple yet charming art style. Most of the characters and levels use singular colors, which, combined with the over-the-top character design, complements the frantic gameplay perfectly. Likewise, the music is mostly atmospheric, but it fits the game quite well. 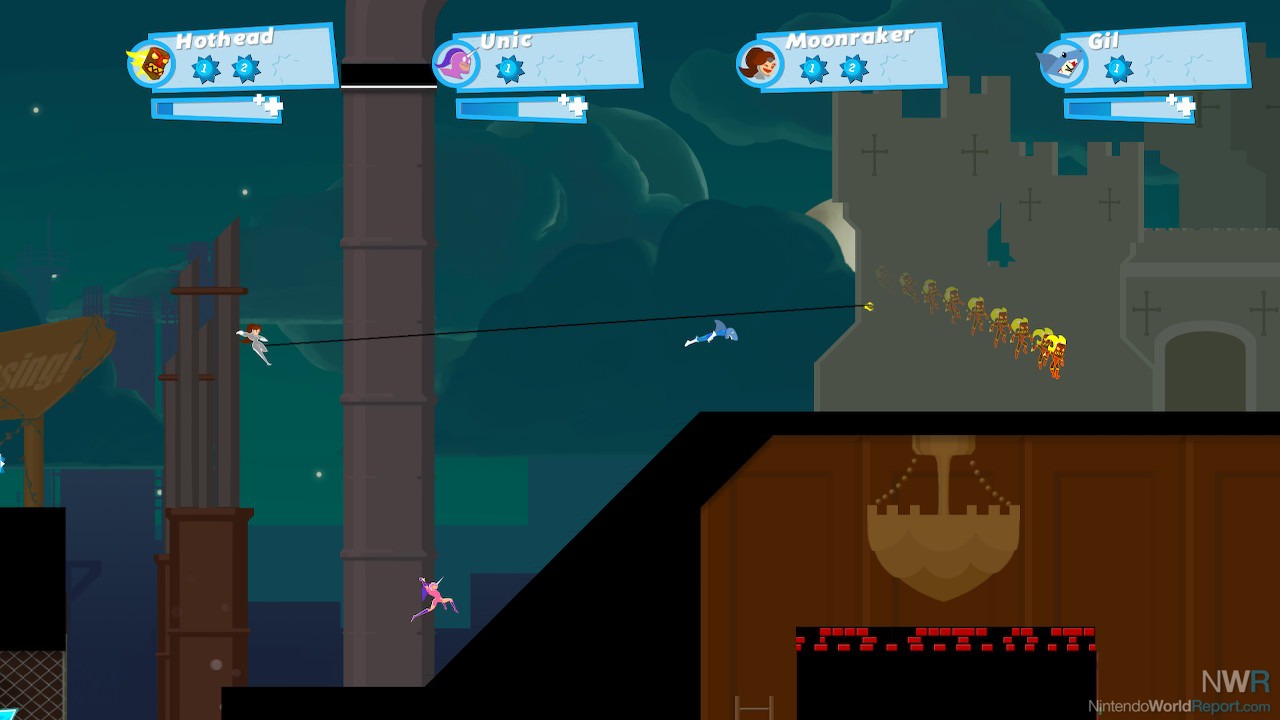 The gameplay of SpeedRunners boils down to a mix of platforming and racing. You and three other heroes are placed on a map and race laps around a fixed path, trying your best to get ahead of your opponents so that they fall off screen. Most matches are extremely fast-paced and can feature multiple lead changes; the first player to three wins takes the match and the majority of races last less than a minute each, which works well for the Switch’s pick up and play nature. Players also have access to a grappling hook, which can be used on any white ceiling to get vault around obstacles or get a boost of speed. The abundance of items and power ups only adds to the chaos, but without skill at the game, they can only help so much. New maps and power ups are also unlocked frequently through an experience bar that fills up after every match, which constantly makes you feel rewarded for playing more. This is where the core game shines as a perfect example of a chaotic but satisfying party game.

It is unfortunate, however, that so many of the cosmetic options for your character are locked behind an abundance of DLC. Characters play mostly identically to each other, but there are only eight characters that can be unlocked in game. The rest of the roster, alongside the ability to have different trails following your character, is locked behind a paywall. Even if all the added content is mostly cosmetic, it is a shame that so much of it is locked exclusively behind a paywall. 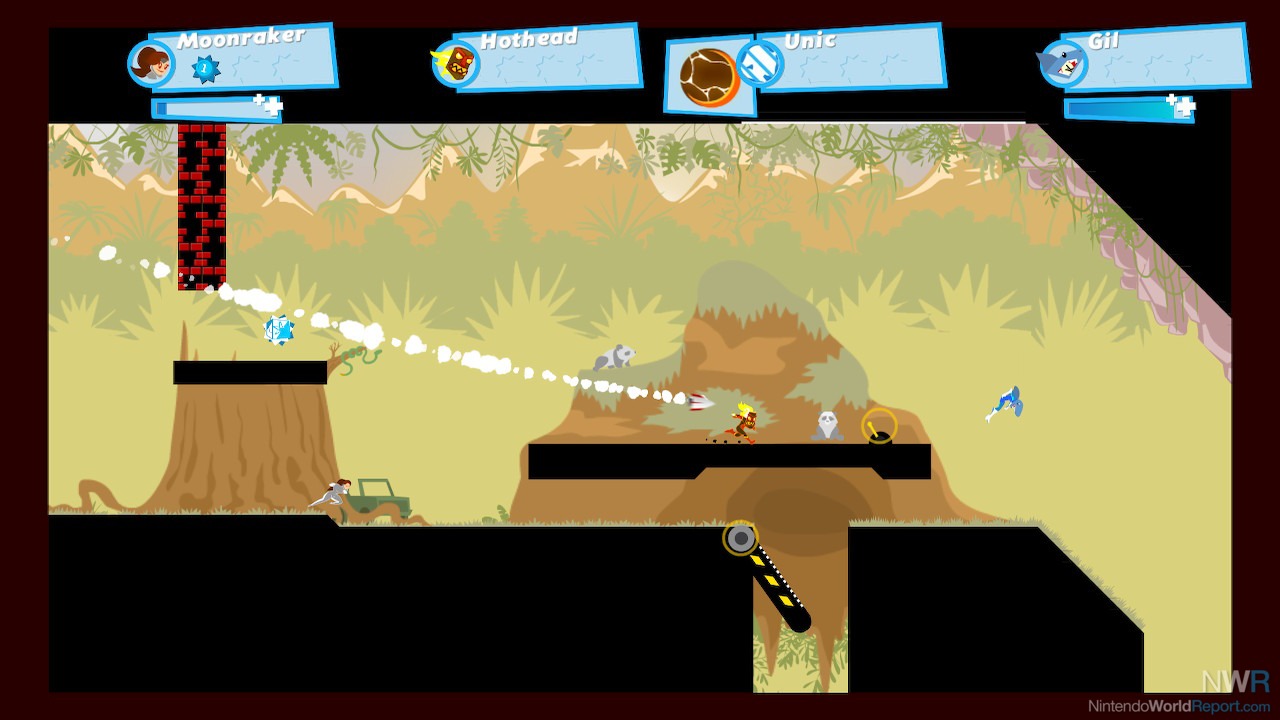 In terms of actual content the game offers, there is little to do besides the main multiplayer mode. There is an extremely short single player campaign, which is enjoyable but is far too short to get engrossed in. Otherwise, there is just the option to play locally or online with other players in a standard four player match. It would have been great to see some variety in the gameplay to keep things fresh, such as a 2v2 mode. After a dozen rounds, you have seen pretty much everything the game has to offer, regardless of the odd new map or power-up unlocked. It is a shame to see such a strong foundation here with few features to keep things fresh.

Overall, SpeedRunners provides the foundation for an excellent party game and is certainly enjoyable with the right crowd. However, the lack of multiple modes and sparse single player content make this package feel like more of a mini-game. With the Switch hosting hundreds of multiplayer games that deliver a similar but fuller experience, like Runbow, it’s hard to recommend this one. If you’re looking for a more robust multiplayer experience, you may want to look elsewhere.