A touching, meaningful experience with too many performance issues.

Tackling the daily monotony of life is certainly something many of us deal with on a regular basis. Mental health issues only compound the problem. Mosaic, a narrative-driven, adventure game from Krillbite, explores these issues, letting you take control of a normal, everyday man who is fighting with needing his boring day job to pay his bills and wanting something more out of life. His struggle is easy to connect with, and Mosaic clearly has the potential to become one of the more meaningful titles to start 2020. Unfortunately, rampant performance issues create a situation where you have to trudge through the mud just to get to the sparse sprinkling of metaphorical messages.

Alerted by your phone, you need to wake up and start your day. You collect yourself and head out to work, where you are met with some peculiar encounters. These delusions are a way for the protagonist to fight through his issues, attempting to resolve the internal battle he faces throughout the playthrough. He’s regularly in debt, trying to find love, and seeking any way out of the pit of sadness he is experiencing, but nothing seems to work out. These feelings and themes seep into almost every aspect of Mosaic. Beyond the perils of everyday life, your character also appears to be universally disliked and unlucky. Entering a full elevator has the occupants moving as far away from the protagonist as possible and train rides see you given quite a wide berth between other passengers. It seems every time he tries to get out of debt or leave loneliness at the door, he is confronted with the reality that he doesn’t have a say here. 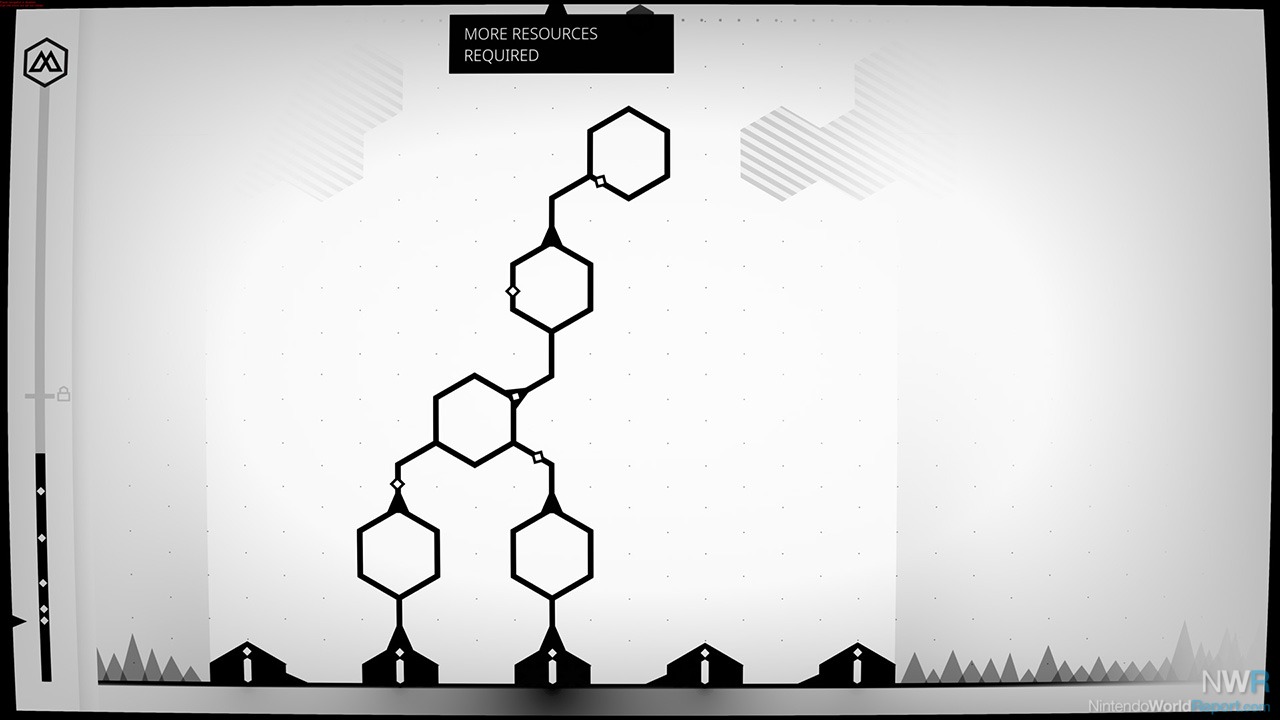 Seemingly, the only positive interaction you can have in this world is a phone game called BlipBlop. In this thrilling title, you have to button-mash your way to collecting as many blops as possible. As a commentary on the “clicker” game genre, BlipBlip allows your character to spend a lot of time trying to reach that insurmountable “Lvl 100” in order to gain “Prestige” ranking. However, even in this simple, guilty pleasure, you can spend hours pursuing this goal only to have your progress reset after reaching the milestone. The cherry on top is being told that all your effort was all just for “Prestige Rank 1,” with what seems to be an endless amount of possible progression. And to be clear: Yes, I did literally (and naively) spend hours trying to see what would happen if this goal was achieved, hoping it could somehow change the protagonist’s outcome.

Even while offering a relatable story and dark themes that can easily be felt and understood, it was hard to deal with—ironically—the monotony that can set in. This is a very short game, with a full playthrough only lasting a few hours, but I still found myself trying to push through to the end as quickly as possible in hopes that there would be something a bit more enticing waiting for me. You move your character and interact with some items here and there in the environment, but otherwise you are sitting back and experiencing what the game has to offer you. 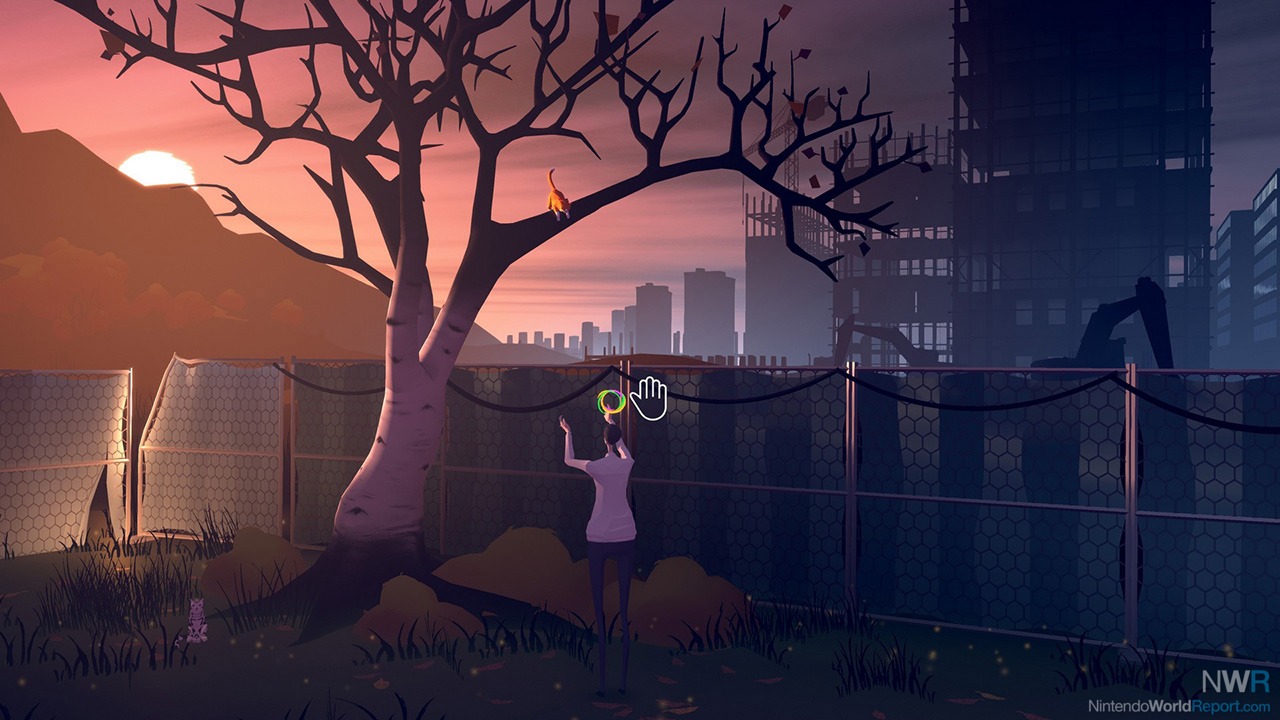 This was only compounded by the fact that the Nintendo Switch version of this title performs badly in several sections. Massive stuttering occurs between nearly every scene change and load through new areas, breaking your immersion at regular intervals. Constant frame dips and a control scheme that has you already plodding your way along means you will move with even less hustle than normal. Hit detection had me catching the protagonist on walls, fences, and whatever else he was too close to, which completely brings your character to a halt. This forces you to wheel around and jockey your character from side to side to free yourself in a weirdly vehicular fashion.

As well, you can find yourself unsure of where you are supposed to go while trying to fight your character through unbearable and frustrating movement. For example, I walked around in circles, back and forth, during the train section because I wasn’t aware that I needed to hop off the train on the opposite side of where I entered, as the doors on that side are hidden due to the camera perspective. With the train packed, the protagonist clipping onto the seats regularly, and frequent frame dips and stuttering, this section took me a good ten minutes to get through, which felt much longer than necessary. This is how certain portions of the game unfold, unfortunately. 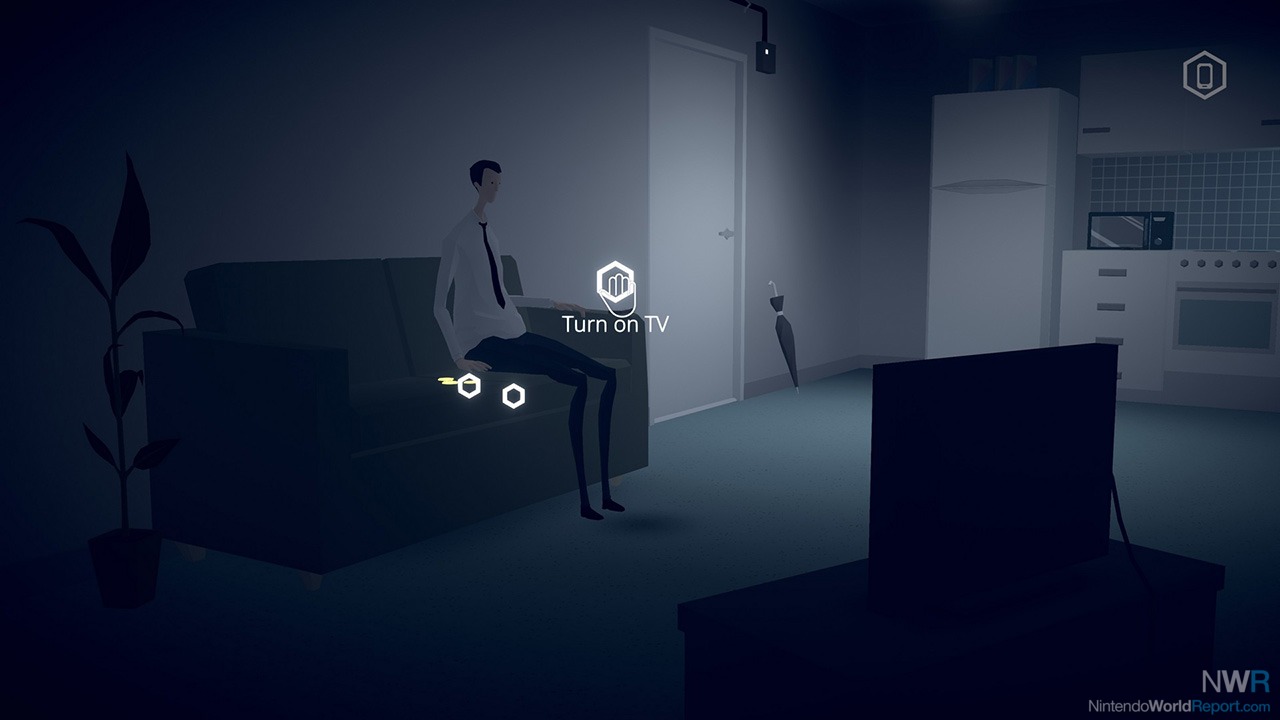 Luckily, this semi-polygonal world, though mostly colorless and dreary, offers some small glimmers of hope if you’re willing to look for them. A few vibrant and distracting set pieces break up this formula and allow for things to be a bit less ominous. Half of the game is spent in a dream world of sorts, which makes for some interesting design and artistic vision.

These delusions offer the only bit of happiness your character has throughout his day, so understandably, you will be drawn to take those side paths on your normal route. Directed at times by a guppy with a seriously sunny disposition, you will enjoy its attitude through some simple delights. Mosaic is light on dialogue and explanations, so most of what you will see and experience will be up for interpretation. As far as messages and themes go, Mosaic draws out more empathy than most—one of its biggest triumphs.

Mosaic was a game I wanted to love. Adventure titles that offer deep storytelling are some of my favorite experiences in the genre, and Mosaic had everything lined up to be truly special. Unfortunately, a little bit too much monotony, a control scheme you will be fighting throughout, and major performance issues make this a game that will have you looking for a way to alleviate your frustrations. Hopefully a patch comes to fix the performance issues in what could have been a fairly decent experience.