A simple but pleasant RPG concoction with hints of depth and monotony.

Across more than 15 entries and spanning almost 15 years (even longer in Japan), the Atelier series of JRPGs is one you may have heard of but never played, and such was the case for me before downloading the Atelier Dusk Trilogy Deluxe Pack. It consists of Atelier Escha & Logy: Alchemists of the Dusk Sky DX, Atelier Shallie: Alchemists of the Dusk Sea DX, and Atelier Ayesha: The Alchemist of Dusk DX. This review will focus on the lattermost, and we’ll have separate reviews for the other two games. I set out to answer two questions before playing Atelier Ayesha: Are these games really just all about collecting materials and crafting, and is this particular game a good starting point for someone new to the series? My short answer to both is a muted “Yes,” but my longer answer is as follows.

The story of Atelier Ayesha centres on the eponymous character and her quest to find and save her lost sister, Nio. Along the way, she must grow from a simple apothecary into a full-fledged alchemist, a goal that is furthered by the host of characters she befriends. One of the first you meet is the gruff but knowledgeable Keithgriff who serves as a type of mentor to Ayesha. He spends most of the game acting like a complete jerk and responding to your questions with statements such as “I’m not obligated to tell you anything.” His unpleasantness actually serves to make the over-exuberance of characters like Regina, a prospector, and Wilbell, a witch, more tolerable. It’s impossible not to discuss the characters when considering the story since the narrative is very much driven by Ayesha’s relationships and adventures with her party members and other folks in the world.

Many of the typical JRPG trappings are present in Atelier Ayesha: a turn-based combat system, experience points and leveling, equipment and items, and side-quests. However, it’s worth looking at some of these elements in more detail as there are subtle differences from what you might expect. First of all, combat is simple but has some neat mechanics. By running into or smacking enemies with your staff, you initiate a battle where your party of up to three faces off against a handful of opponents. A meter on the right side of the screen shows the turn order of all participants, and gauges under each character fill up to allow you to mitigate damage from an enemy or perform a follow-up to a partner’s attack. The enemy design is a little disappointing, and spell and attack animations are nothing special. Ultimately, battles are quite easy until closer to the end of the game, but fortunately there is a fast-forward option to speed up the proceedings. 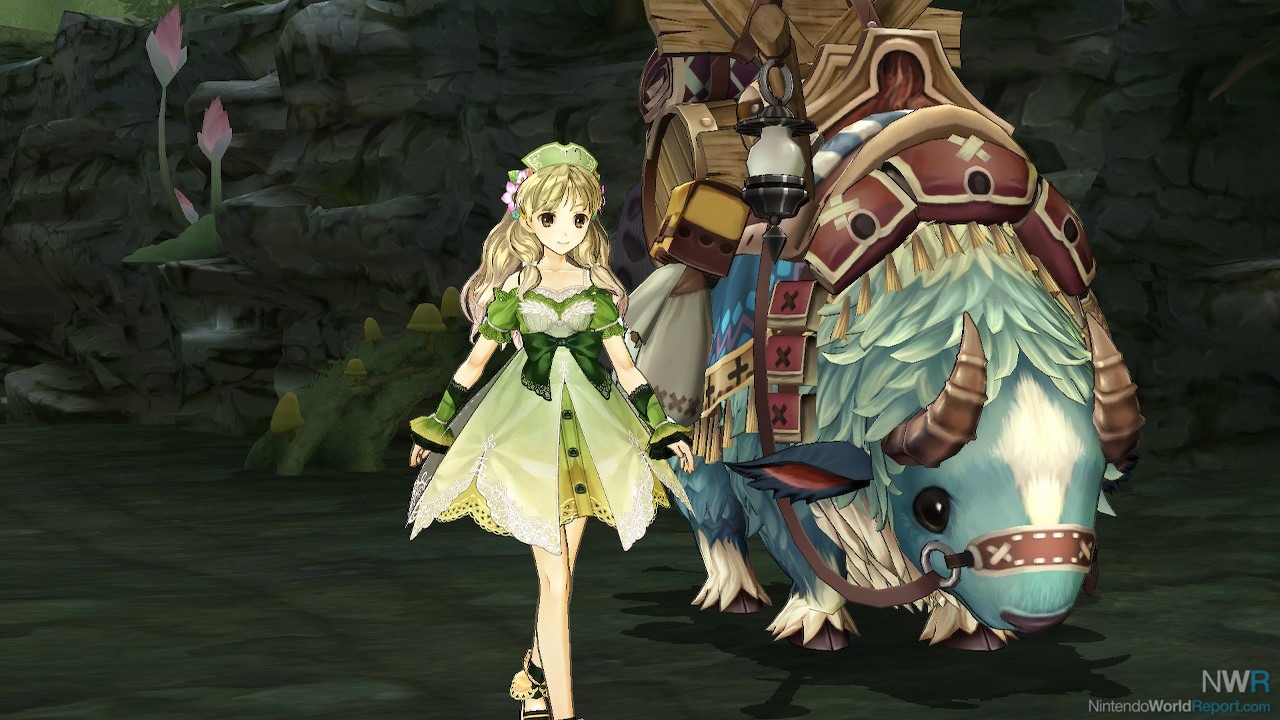 Side-quests come in many forms and make up the bulk of the adventure. As you move from point to point on the overworld map, which is reminiscent of something like Shin Megami Tensei IV, you can enter smaller field areas and dungeons that contain enemies and crafting materials. By collecting all the materials and defeating all of the enemies, you complete two different objectives, and doing so often unlocks new overworld areas. In each town, you’ll find NPCs who have Requests for specific items that you can craft, which rewards you with money and sometimes other items. Finally, the main characters in the story, including your party members, have their own side-quests that you can complete, and completing all of a character’s associated quests can unlock an extra ending scene.

On the surface, the crafting aspect of Atelier Ayesha isn’t hard to grasp, but it also has a depth to it that can be quite intimidating. As you progress through the game, you earn new recipes from books that you find or purchase from shops. In each town, there is a room where you have a synthesis cauldron that allows you to create potions, food, and accessories, among other things. Very basically, each recipe calls for two to four components of a certain type, like ore or liquid. From within those types, you can choose lesser and greater materials to submit for synthesis, with rarer or more valuable ones yielding a greater finished product. There are other abilities to use and decisions to make that can affect the results, but these require more understanding and consideration. 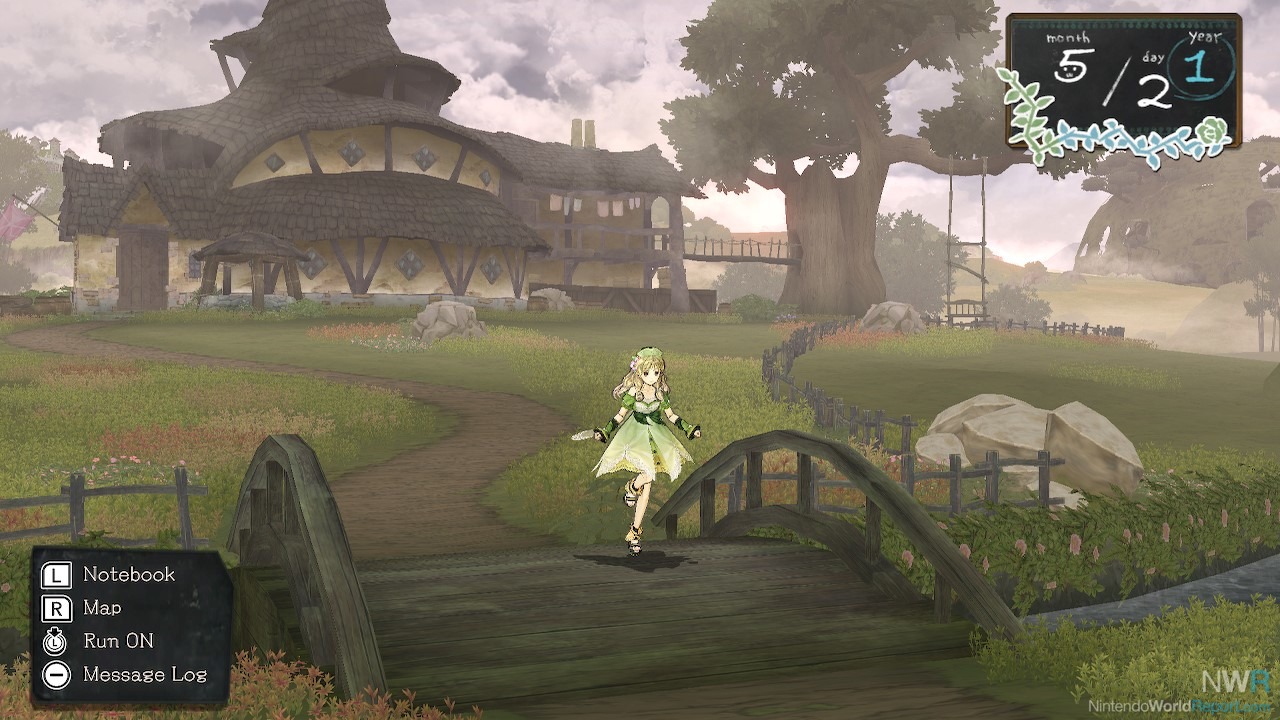 At the end of the day, I was glad to finally have an opportunity to play through an Atelier game, even though I didn’t complete the story within the three-year in-game time limit. Walking around the overworld, harvesting materials, and crafting all take up in-game hours, so you do have to be cognizant of the passing days and months of Ayesha’s calendar. There is a certain charm to the characters and the world, even if it might all be too light-hearted or inane for some to enjoy. It’s worth noting that while certainly playable, the game definitely looks and runs better in docked mode. You also aren’t able to move the camera at all, making it a bit of a chore to explore some of the more crowded outdoor areas. A satisfying sense of progress permeates the experience as you constantly level up your characters and your crafting prowess, all the while opening up the world and forging stronger bonds with your comrades.

Atelier Ayesha: The Alchemist of Dusk DX seems to be a decent entry point into the world of Atelier, and its crafting system hides a depth that will satiate more meticulous players. The main story does take a back seat to the character interactions and exploration of the world, but I had some fun seeing Ayesha’s journey (nearly) to completion. Look forward to reviews for the next two games in the Atelier Dusk Trilogy Deluxe Pack coming soon!

Would you expand on "still feels like a PS3 game"? To me that means lengthy installs, long load times, controller de-syncs and distracting visual/audio jitters.

Would you expand on "still feels like a PS3 game"? To me that means lengthy installs, long load times, controller de-syncs and distracting visual/audio jitters.

Fair question. I think you notice that this game doesn't look or play like a current-gen title. The experience is very simple; the world has many places to visit, but most of them are plain or consist of things you've already seen. The load times are actually quite short and I didn't notice any of the other issues you mentioned.

My point was that I didn't want people to go in thinking this is a game made in 2020. It originally came out in 2014.