This trio of classic machines is pretty funny.

Ah, the Williams collection. I was kind of lukewarm on the first wave of these classic pinball tables and hoped that they weren’t indicative of the collection as a whole, given how much praise the Williams tables generally receive. It sounds like David Lloyd enjoyed the second pack, however, and I’m happy to report that all three tables in the fifth pack are excellent. 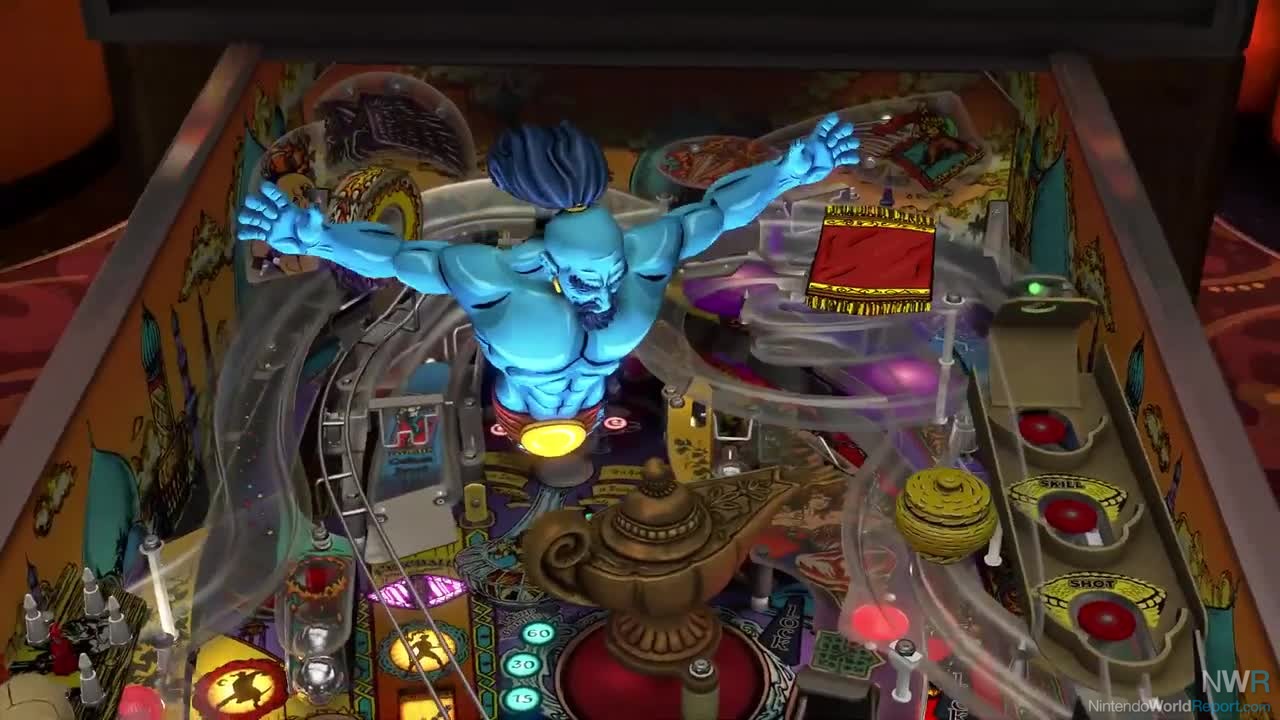 My favorite is Tales of the Arabian Nights, which features a blue genie character and a lamp that spins around when you hit it. Your goal is to collect several “gems” and rescue a princess, and to do so you activate quests and then hit various objects or lanes to complete them. There’s some interaction with the dot-matrix screen here, where you select your rewards for completing quests. The music, voice samples, and general aesthetic of this table are fantastic, and all three challenge modes (One-Ball, 5-Minute, and Survival) are all perfectly doable. The Pinball FX3 overlay is also not as intrusive as I’d feared, and I generally preferred to play it that way.

I initially didn’t like No Good Gofers, which was apparently the company’s last pinball game. It’s quite ramp-heavy, and in fact one of the table’s most famous features is a “slam ramp” that contains one of the most difficult shots (“hole-in-one”) in pinball history. I don’t think I’ve made this shot yet. This is the only table of the three that contains a third flipper (upper right). My initial distaste was largely a result of thinking it relied too heavily on ramps, and while that’s true, there’s more depth here than I originally thought. It is, however, prone to more gutter balls than I’d like. I find that the Survival and 5-Minute challenges are pretty fun, but the one-ball challenge is tough due to the prevalence of gutter balls. As in Arabian Nights, the FX3 overlay is unobtrusive.

Another one of Williams’ final pinball machines is Cirqus Voltaire. It features a magnet that diverts the ball into the locks and a giant green “ringmaster” head that rises up and must be pummeled. It also moves the dot-matrix display from the backboard to inside the table itself, where it forms the back wall. This table features a whopping EIGHT multiball modes, although most of them are two-ball affairs. You can also stack multiball modes, but the highest number of balls in play will be four. This is my second-favorite table in the pack. It’s a large table with plenty to do and what ramps do exist have interesting tracks. All three challenge modes are quite enjoyable. Oh, and like Arabian Nights, I keep the FX3 overlay on here, too.

I’ve also discovered the joys of playing Pinball FX3 on my Flip Grip, which is actually preferable to playing on my TV. Definitely worth a try if you have that wonderful accessory.

All three of these tables are enjoyable, so I can heartily recommend this collection if you’re a fan of real pinball tables or previous Williams Collections.