An interesting take on Bomberman that makes invisibility a core mechanic.

In an increasingly crowded marketplace, indie games must constantly fight tooth-and-nail for visibility. As the eShop gets bombarded with a weekly avalanche of titles, it’s only inevitable that a few great games will slip through the cracks and go widely unnoticed. One example is Invisigun: Reloaded, a multiplayer stealth battle game from Sombr Studio that hit Switch in the summer of 2019. It’s a hidden gem that most Switch owners have probably never heard of, but they should soon discover how very good it actually is. 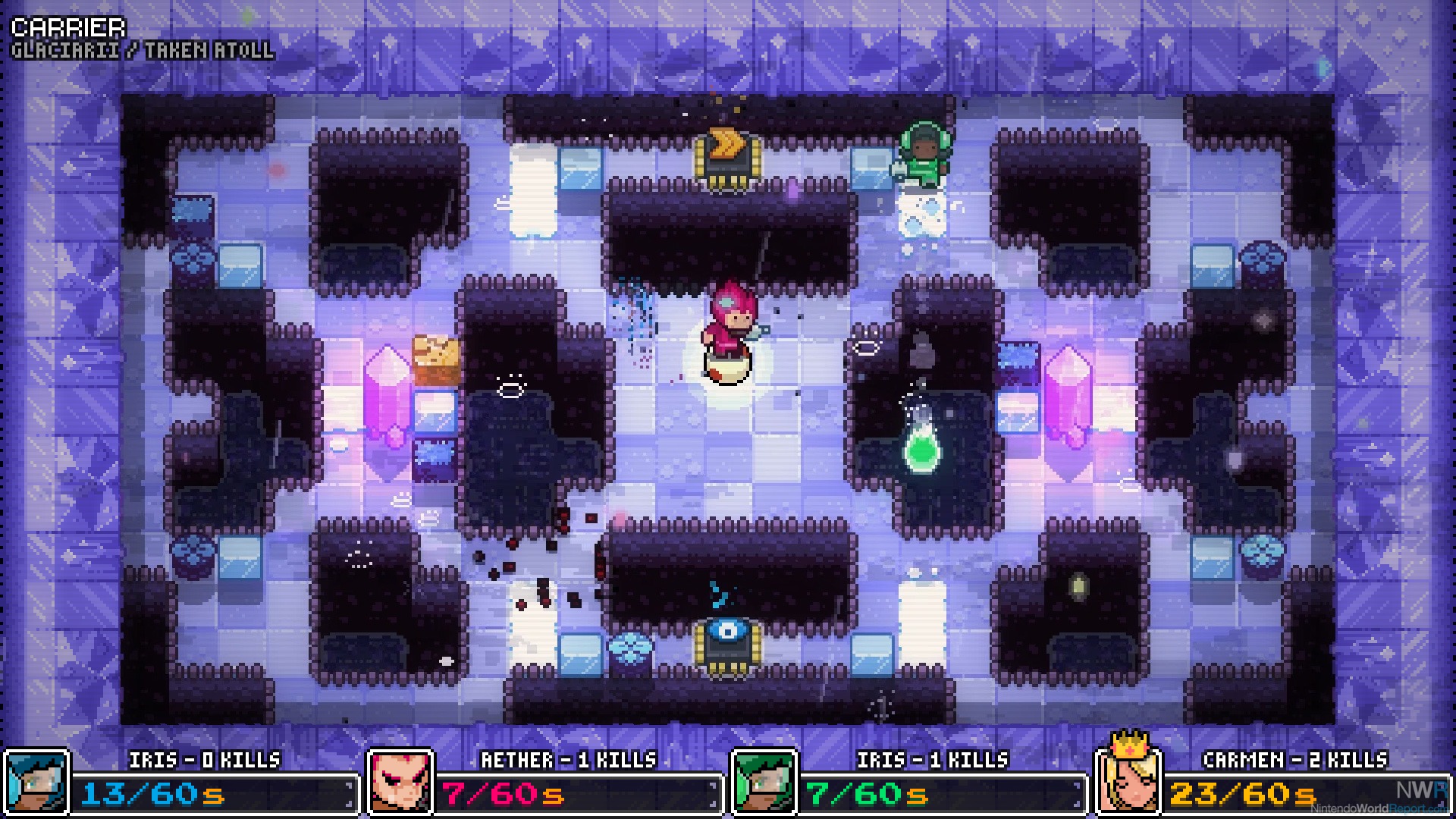 Over the years, I’ve played my fair share of Bomberman-inspired battle games, each with their own twists and ideas. But what makes Invisigun’s concept so unique is that all of the players are invisible, and they only reveal themselves when firing their weapon or using special abilities. To track down opponents, you must pay close attention to the environment for subtle visual clues. If your opponent walks through water, you see and hear splashes. If a player walks through sand, they leave behind a trail of footprints. As players attempt to stealthily navigate around the map, it can lead to some very intense matches and psychological mind-tricks.

Invisigun features an aesthetically pleasing art direction with colorful environments and quirky characters. More importantly, the pixel art has a very crisp, clean look that makes it easy to distinguish environmental objects from one another. That’s incredibly important in a game like this where the readability of the environment – like scanning your environment for clues – is crucial to winning matches. It also helps that the game’s maps are designed to look like a grid, making it easier to count your steps and keep track of your current position. Your character is controlled with the D-Pad as you maneuver one grid-space at a time. 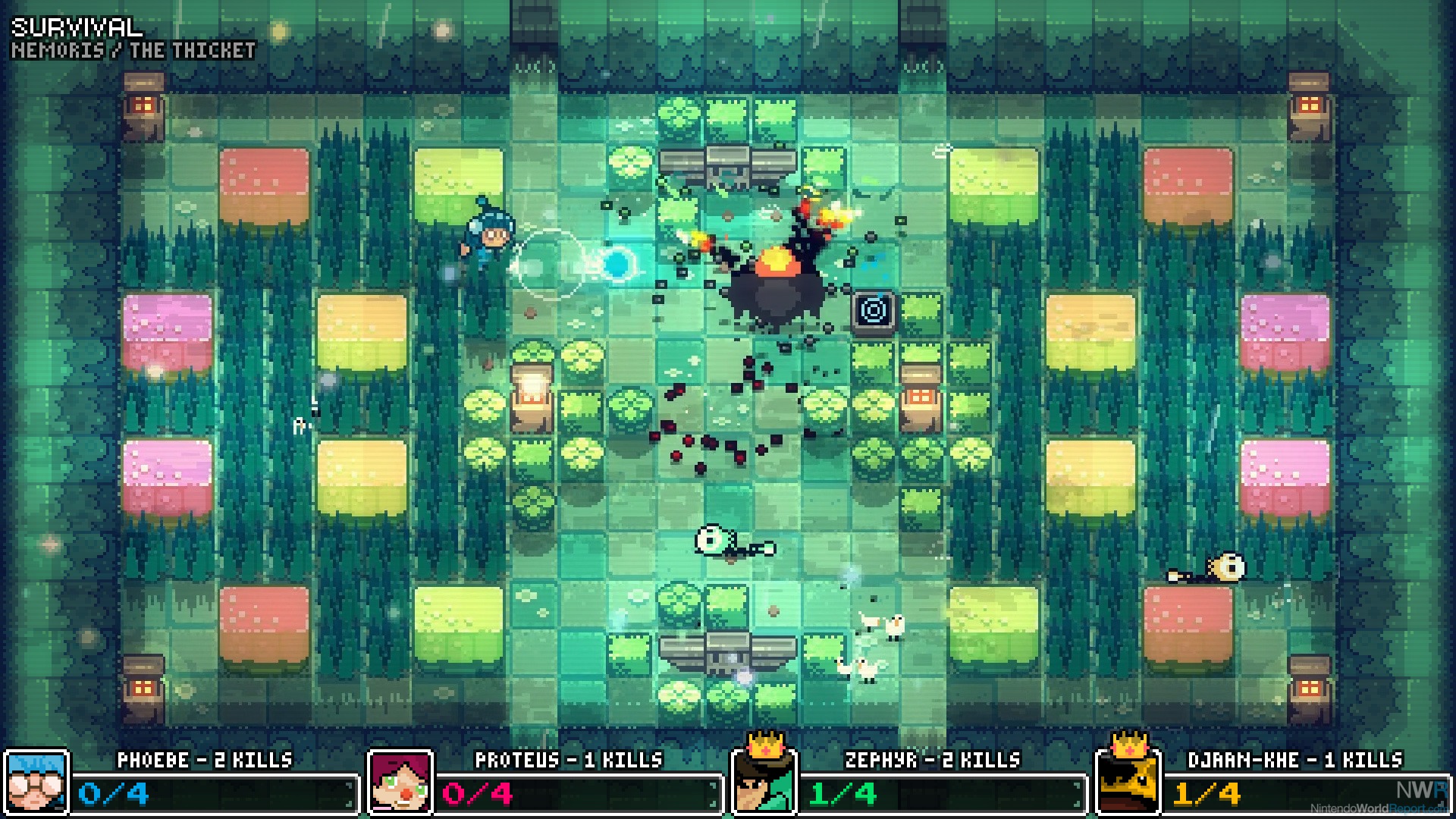 As one could imagine, controlling an invisible character has a learning curve. For newcomers, the invisibility mechanic can sometimes lead to more frustration than fun, at least in the beginning. And in a fast paced multiplayer game like this, keeping up with all of the on-screen action can sometimes be challenging. Fortunately, the game offers a quick tutorial to new cadets who want to learn the ropes. And with a little practice and persistence, you’ll quickly memorize the grid-based map and learn how to avoid hazards and obstacles.

There’s an impressive amount of content packed into this game. The developers have described Reloaded as a “culmination of five years of painstaking blood, sweat, and tears” and it most definitely shows in the end product. Invisigun offers local-and-online multiplayer battles with full PC crossplay, 12 playable heroes, and a 72 playable battle maps. Battle mode features a variety of game modes – for both core and casual players – with different conditions to win. For example, in “Hunter”, you score a point for every hero killed. In the mode “Survival”, the last hero standing each round gets a point. 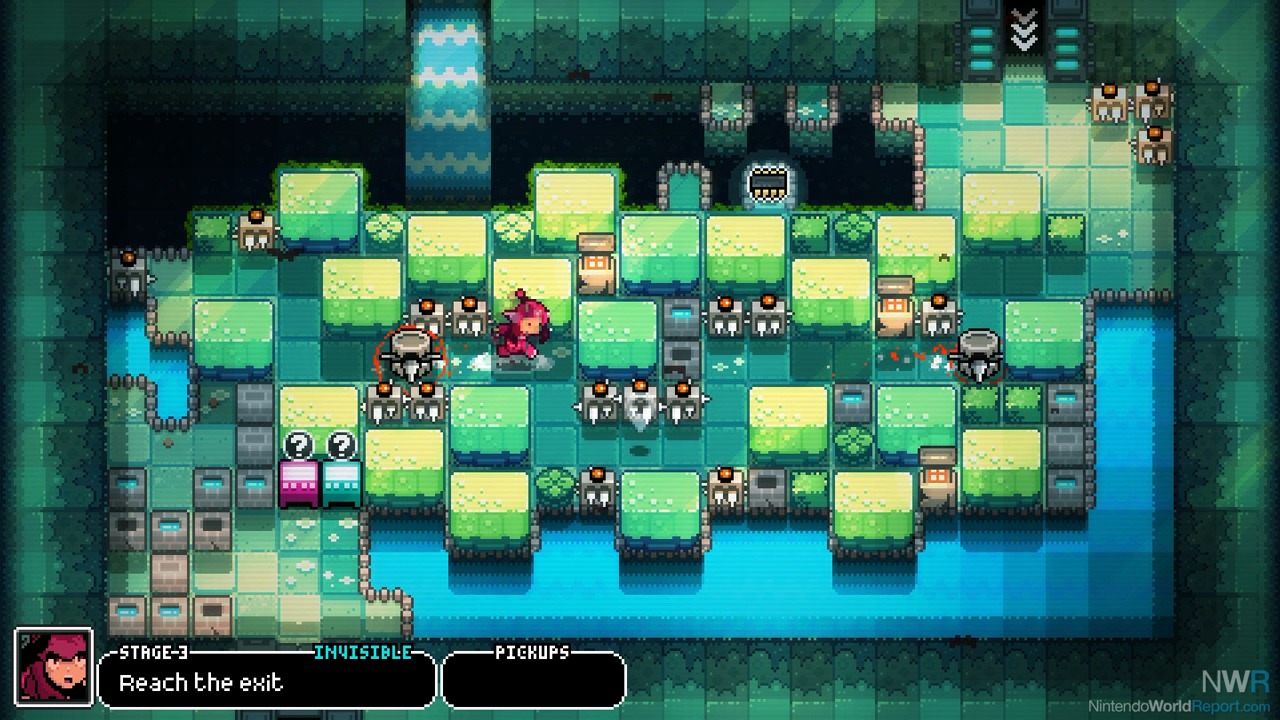 Unfortunately, Invisigun runs into the same problem that plagues other great indie Switch multiplayer games. Since the community around Invisigun is still small and growing, finding players for online matches can be difficult. However, there are ways to easily get around this issue. Invisigun allows you to create multiplayer matches with bots if you can’t find real players. Secondly, you can join Invisigun’s Discord channel to organize matches with other friendly players.

If you prefer playing alone, there is a mode called “Hero’s Journey” that offers single-player campaigns specific to each hero. These campaigns contain puzzles and boss fights. Once you have gained enough practice from the single player campaigns, you should feel confident enough to test your skills in multiplayer. With that said, while I enjoyed the single player campaigns, they often felt too repetitive for my tastes. Invisigun shines brightest when it focuses on multiplayer, embracing its Super Bomberman influences as a social party game.