In 1984, four comedians made a movie about becoming paranormal exterminators who stop an extra-dimensional destroyer deity from ravaging New York City. Seventeen years later, our lovable pal Luigi walked into a haunted mansion with a vacuum strapped to his back. Now in 2019 we have Dead End Job, a game about working for a paranormal extermination service where your main tool is a vacuum and a plasma gun. Dead End Job is the newest competitor in the ever-growing list of roguelites, taking inspiration from The Binding of Isaac and conjuring up spooky, ghost-filled chaos. Does this mix of inspirations work out in its favor? Sadly, I don’t really think so. 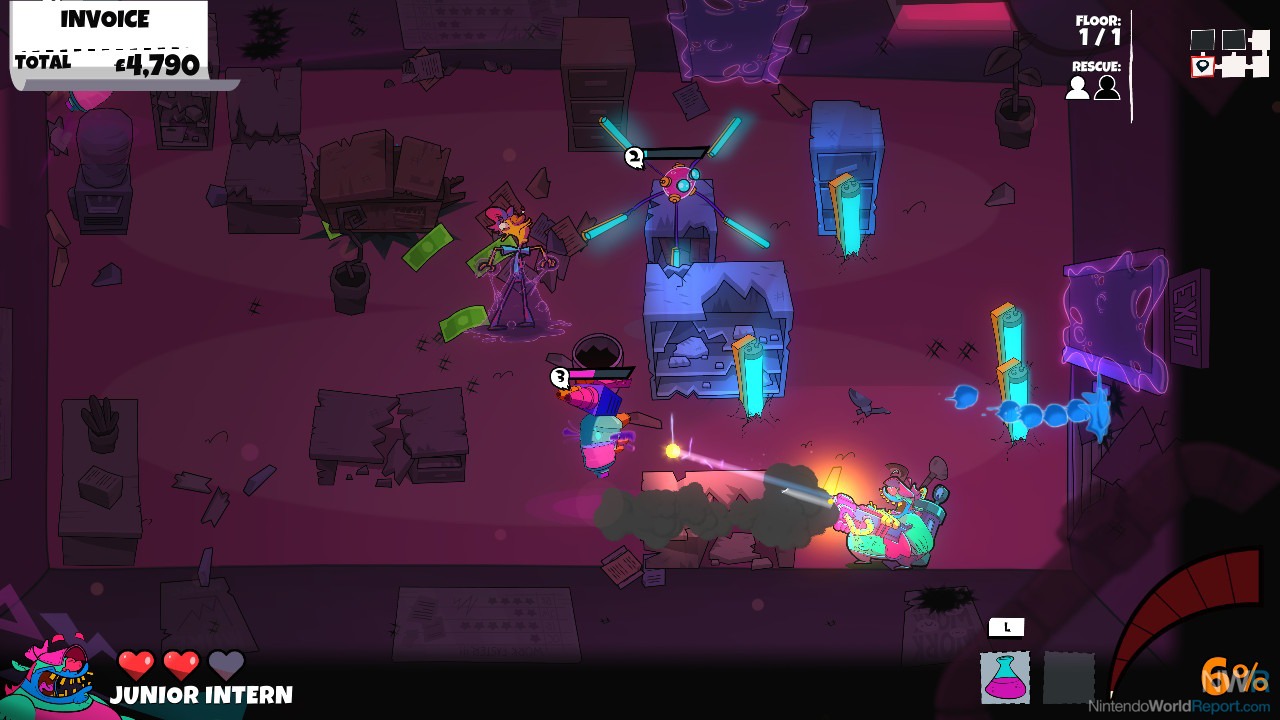 In Dead End Job, the player takes on the role of Hector Plasm, an exterminator working for the company Ghoul-B-Gone. One day his mentor, an old lady named Beryl Ware, appears as a ghost that only Hector seems to be able to see. He must figure out a way to save her soul and bring her back to life, or she’ll be forced to “live” the rest of her days as a ghost. This is honestly all there is to the story of the game, presented in cutscenes where the voices are represented by deep grunts, Banjo-Kazooie style.

In terms of gameplay, the player can select an area, starting with an office environment, and moving on to others as they begin earning money, and their run starts from there. What follows is a procedurally-generated dungeon, a la Binding of Isaac, where rooms are filled with various types of ghosts to catch and civilians to rescue. By pressing the right trigger or moving the right analog stick, the player can fire a volley of plasma shots, with the right trigger making use of an auto aim and the right stick firing where you’re pointing with it. While it might make more sense to some to always use the auto aim if it’s being offered, it generally never seemed to work right. Instead of attaching itself a single target and sticking there, it without warning constantly switch targets for no reason and did not appear to have any method of distinguishing a dangerous enemy from a harmless bookshelf. Using the right stick mitigates this a little bit, but I still had moments where my aim would be suddenly moved to shoot at a wall instead of the ghost two feet in front of me.

Once a ghost has been shot enough to be stunned, pressing the left trigger will activate your vacuum, sucking them up and adding them to the client’s bill. Shooting your gun or running the vacuum for too long will build up a heat gauge in the lower right corner of the screen, and when it fills entirely your gun will overheat and cannot be used for a few seconds. Various items can be found throughout the environments, with the player being able to hold two at a time. These items do all sorts of things from healing the player, making them move faster, or even serving as a projectile that stuns any ghost in one hit, but the main issue is yet another thing this game shares with Isaac: it makes no effort to tell you what any item is going to do. While most items became clear once I had actually used them, usually in a way that completely wasted it, there were still some items where I would throw them down and still have absolutely no idea what effect they were having.

Dead End Job also heavily advertises its pop in and out co-op experience, where at any time a second player can hold down A on their controller and enter the fray as Hector’s ghostly mentor Beryl. The unfortunate downside to this co-op is that the player controlling Beryl does not actually seem to have much ability to help Hector out at all. Beryl has a gun of her own, but it can only shoot a sticky ectoplasm substance on to the floor that is clearly meant to slow enemies down when they walk over it; there’s just one issue with that: Dead End Job is about ghosts, and the majority of ghosts float above the floor. For this reason the list of beings that Beryl’s goo seemed to affect at all was a small portion of common enemies and Hector himself, causing Beryl to be less help than she seemed. Beryl also cannot damage ghosts, vacuum them up, pick up items, select a door to walk through, or even pick up money. At a certain point, my co-op partner actually began questioning exactly purpose he was serving at all.

Overall Dead End Job, is really nothing special or original. Its gameplay flow is just another take on The Binding of Isaac mixed with Luigi’s Mansion, and it can’t seem to go five minutes without lifting a joke straight out of Ghostbusters. There are some strengths to the game, such as its wonderfully energetic soundtrack and the high quality of its animations. Its art style, based on the overly detailed gross out humor of 90s cartoons, may vibe well with some people, though I truthfully am not one of them. It’s a game that is clearly trying, but sadly misses the mark, making it feel very much like a career that isn’t really going anywhere. What do you call that again?