A beautiful and obtuse RPG that rewards patience with a unique experience.

The SaGa series of JRPGs started all the back with The Final Fantasy Legend on Game Boy, which in Japan was released as Makai Toushi Sa·Ga. Across more than a dozen entries, the SaGa games have never really gained widespread acclaim or appreciation, likely due to their obscure systems and challenging nature. In Romancing SaGa 3 on Switch, a remaster of the original Super Famicom game, turn-based combat, a non-linear structure, and absolutely no hand-holding culminate in a surprisingly enjoyable and satisfying adventure that may serve as a great entry point for designer Akitoshi Kawazu’s infamous series.

At the beginning, you choose from eight different characters: Julian, Thomas, Mikhail, Khalid, Ellen, Katarina, Monika, and Sarah. Depending on whom you choose, you will play through a different prologue section of the game with a smaller, more focused story and its own conclusion, before the world really opens up. You can also choose a different star of destiny for your character, which assigns bonus points to various stats, and a signature weapon, such as a sword, axe, or bow. I chose Julian for my playthrough of the game, and his opening revolves around escorting and protecting Monika, who turns out to be the sister of the Marquis, Mikhail. The opening reminded me a little of Dragon Age: Origins in that you may have a different experience over the first hour or so depending on your starting character.

It’s worth mentioning that one of my early and recurring impressions of Romancing SaGa 3 is that it looks like Final Fantasy VI, especially in terms of the character and town design. The HD graphics in the remaster are a marked improvement over the original Super Famicom visuals, and the detail that can be seen in the enemy sprites and backgrounds is quite impressive. I can’t help but yearn for other SNES-era RPGs to receive the same treatment, but I’m happy to settle for Romancing SaGa 3 in the meantime. 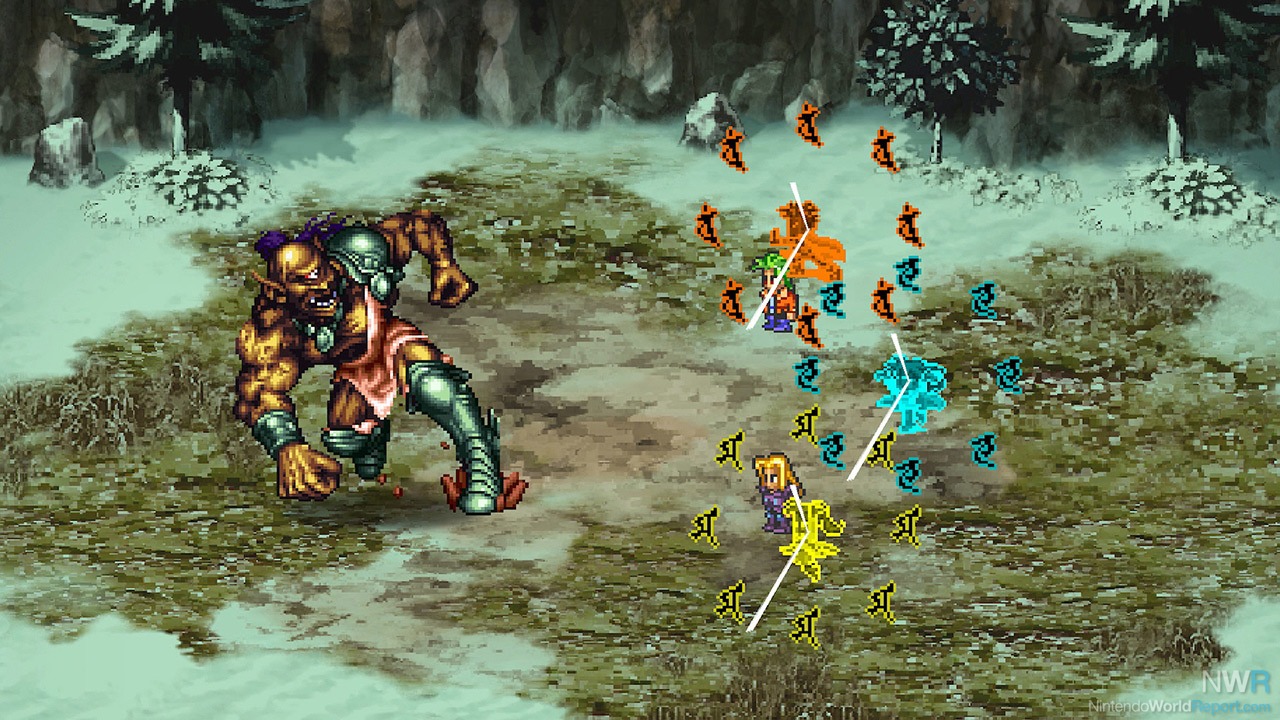 There are some unique features that distinguish a Kawazu-made JRPG from more standard titles in the genre like the Dragon Quest games. One distinction is that experience points are nowhere to be found; instead, the mechanics of progression are a little less transparent. By defeating enemies, you’ll randomly see boosts to your weapon proficiency, which increases your damage, your SP or MP, which allow you to use abilities and spells, and your HP. My understanding is that there is a type of enemy scaling for basic monsters that you encounter, but bosses do not scale, so you aren’t punished for grinding like was the case in some previous SaGa games. This fact alone makes Romancing SaGa 3 more accessible than 2, for example, which released on Switch in December of 2017. You also gain new abilities based on the weapon you use and the abilities you use, but again these occur seemingly at random. A really neat feature is that after a character acquires a new ability, repeated use with it can cause it to become learned, and then you can teach it to any character in your party. Better still, you can take the SP levels and learned abilities from an old save file into a new one, effectively creating a new game plus.

After the prologue, the main story revolves around the opening of the Abyss Gates, and the flooding of monsters into the world. Your primary task is to close the gates by locating them and defeating the boss creatures guarding them. Interestingly, during and leading up to closing the gates, the experience is fairly non-linear. By talking to people in each town, you learn of new locations that you can visit by going to the very simple-looking world map. There is no walking from place to place on this map; you just highlight the city you want to travel to and select it, giving new meaning to the phrase “fast travel.” In certain cities, you can also board a ship at the port that will take you to new areas, adding them to your world map. Throughout the world, you’ll encounter characters who can join your party, up to a total of six, but you’ll only be able to fight with a maximum of five characters. Some people you encounter will give you objectives to complete in exchange for them joining you on your adventure, while others will give you key items you can use to defeat certain enemies. By moving from town to town, following that number one rule of RPGs, you’ll open up sidequest-like events that are almost their own self-contained stories, and searching for these is one of the best parts of adventure. 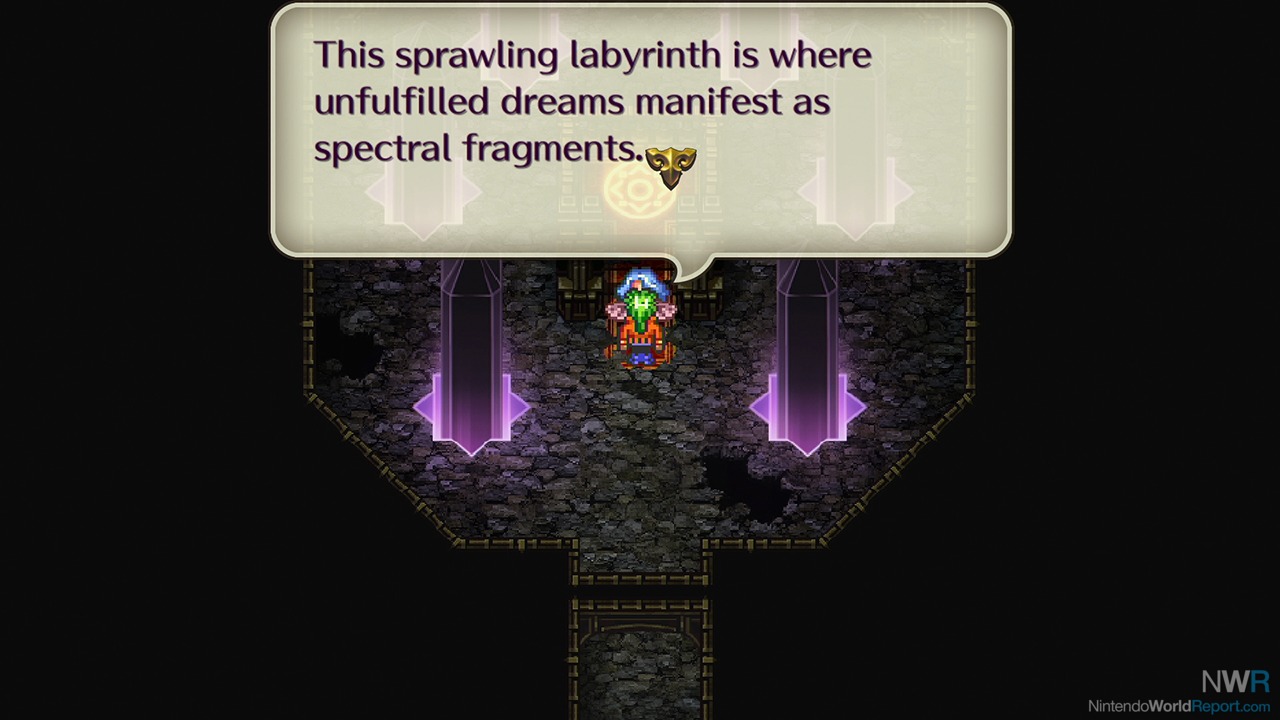 All of this aside, figuring out where to go and what to do next can be quite frustrating. For some events to pop up, you’ll need to have a certain total of hitpoints, and it’s not like there is anyone or anything in the game that tells you this. Grinding is a major aspect of the game, even before you get to the guardians of the Abyss Gates. It can be a very good idea to grind in places where the enemies are fairly challenging as that seems to produce the most regular level ups. Fortunately, grinding is made easier by the fact that HP regenerates after every battle, with death only costing you a lifepoint or LP. You can restore LP, SP, and MP by visiting an inn or by using items that you buy or pick up. The currency of the game, aurums, also works in a funny way in that enemies usually don’t drop much if any, so your main sources of money are through finding it in treasure chests or selling items.

Given that I spent most of my time with Julian and didn’t end up recruiting all of the possible party members, there are a number of elements of Romancing SaGa 3 that I still haven’t even experienced. There is a scenario where you can play at being ruler of the city of Loanne with Mikhail or facilitate trades and earn aurums with Thomas. It’s entirely possible to never come across those mini-games, and I think this speaks to what makes the game such an interesting specimen. It refuses to hold your hand or tell you where to go next, so you have to be equal parts inquisitive and patient to accept that you likely won’t be able to fully understand Romancing SaGa 3 even a dozen hours into playing it. The mystique of its systems and world is one of its most captivating elements, but there is no question that it will be frustrating to those looking for a more familiar or traditional experience. I myself bounced off of previous SaGa games, in spite of a constant fascination with them, but I am happy to say that Romancing SaGa 3 has become one of my favourite JRPGs. If you’ve never dabbled in the works of Kawazu, the release of this remaster is as good a time as any.