I came to Override Mech City Brawl with the hope that it’d help scratch my robot battle itch. The idea of controlling giant humanoid robots to battle with monsters or other mechs has been romanticized across all sorts of media for decades now, and this title aims to offer a small-scale version of that flavor. Rather than being focused on customizing your build or a pure simulation experience, think more arena battle with a roster of pre-built characters more akin to a fighter select screen. In that way, it shares similar DNA to something like Virtual On. 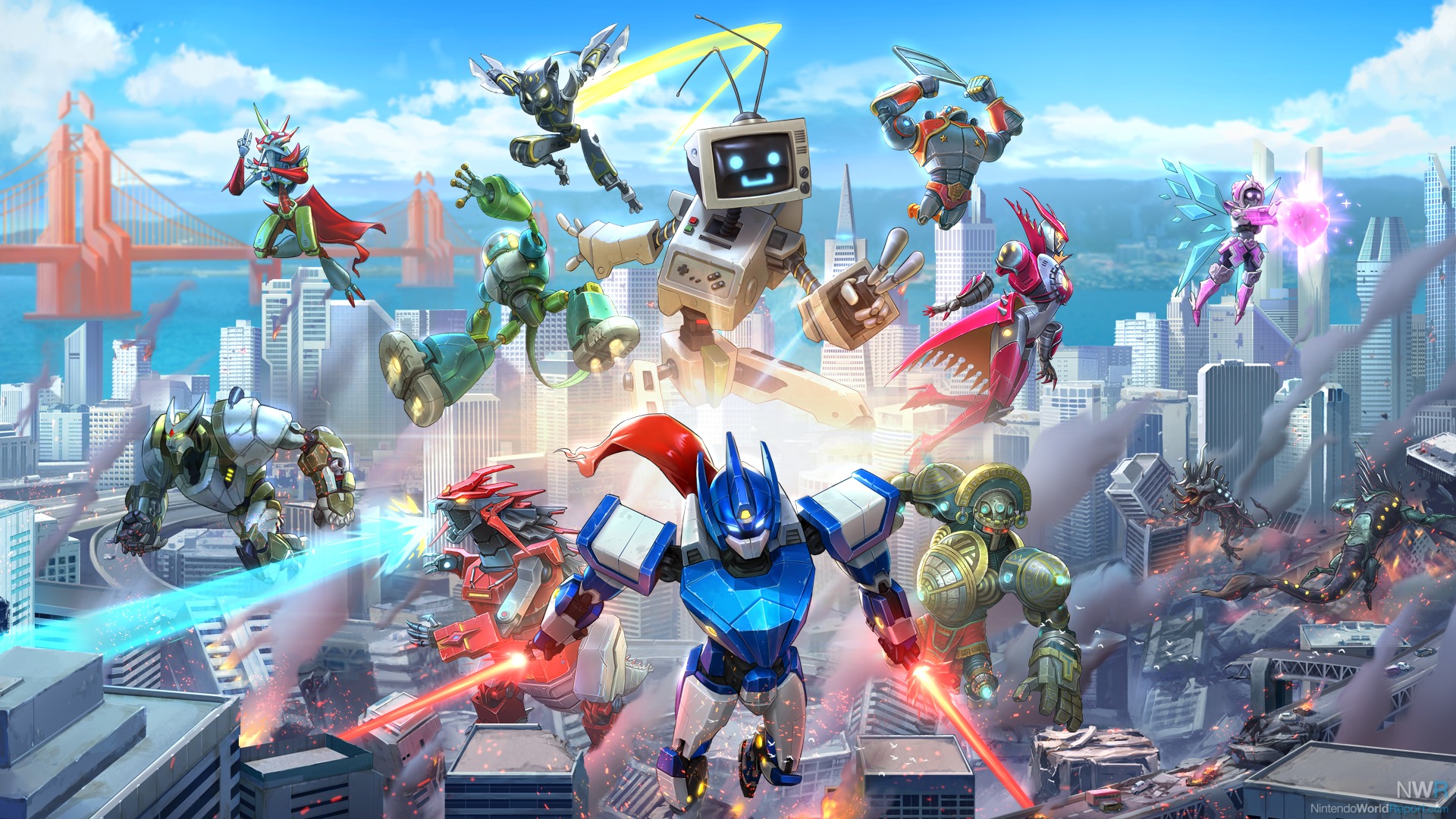 To start, I went into the Arcade mode, which acts as the de facto campaign. I was pleased with the variety of mech options, and landed on Contessa – a very stylish, slick appearing mech with flair that looks aesthetically cool (other than the high-heels, which is a bit much). The story has a threadbare premise of being contracted out by some military general type as a mercenary to be dispatched in cities where beasts the size of buildings and disturbingly human teeth have run amok. Tiny bits of back-and-forth dialogue are shared between the pilot of the mech you chose. The general/commander’s dialogue is nondescript outside of providing mission detail, likely because they must account for a dozen different possible responses. All of this to say – the story is completely forgettable, and I’m struggling to recall explicit details after playing it.

Between missions, you can equip pre-select items unlockable throughout the campaign, which allow you to summon them from the sky and use in-match. If melee is your jam, equip the laser beam sword and shield to unleash your inner Gundam. If you prefer the feel of a Power Ranger Zord shooting a laser beam to obliterate the giant beasts, equip yourself with the different railgun weapons. Additionally, you’re able to unlock perks after each mission, up to four. If you come across a new perk beyond that, one of the current ones must be eliminated - much like a Pokémon learning new moves. Typically, you’ll be provided with a set of 3 different potential missions to approach, with a day count of how long it’ll take coupled with a difficulty set. 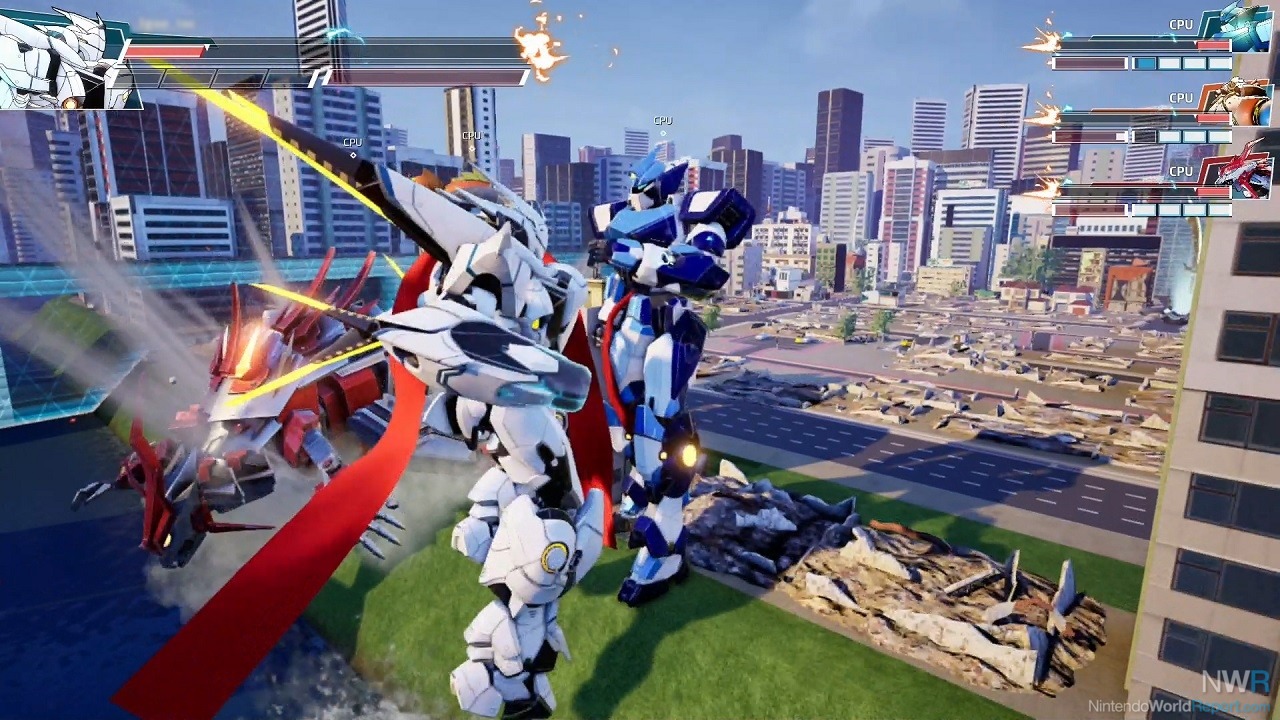 Missions are typically waves of skyscraper sized beasts, many which have disturbingly large, human like teeth. A variety of melee moves are at your disposal, which you can chain together into combos if you haven’t yet overheated. Your mech has a boost that lets you maneuver with strafes and escape routes. Those weapons you equipped in the menu? Summon them from the sky and pick them up to punish the monsters with. On paper it sounds great, but it’s a mess of being crowded by beasts and chain locked by getting ganged up. Oddly enough, despite regularly getting clobbered through a mission, I was never concerned about losing because my health never depleted beyond a quarter of a bar, which in effect makes the difficulty meaningless. An invisible wall keeps the action constrained to a small piece of real estate, which undercuts the large-scale city battle feel you’d want with the premise. The most damning aspect of battles is the persistent, uneven framerate stuttering, which is inexplicably worse when docked. Override is going for that frenetic style of mech combat, making this issue a particularly bad indictment.

Overlooking that, also be prepared for disappointment at the prospect of extra modes to sink your teeth into. There’s a place to poke around with customization, but it’s limited to the weapon/perks as well as some color swaps. A versus mode that feels as limiting as the campaign. And worst of all, a completely dead online mode. I started an online matchmaking queue and took my dog for a walk. Fifteen minutes later, the game was still attempting to find someone, ANYONE to connect a match with. Dead matchmaking at release means dead matchmaking forever.

But who can blame people for not gravitating toward this when there is a larger, more expansive, and much smoother gameplay experience out there at a negligible price difference on the Switch in Daemon X Machina? Override Mech City Brawl asks a lot out of potential customers for a much more flawed game. Even if it were a budget title, the framerate valleys, constricting scale, limited customization options, and a completely dead online presence would make it tough to recommend. In its current state, you’d do best to walk past the smoldering pile.