Work together to save the world's most evil person... Captain Brains.

Tarsier Studios are a creative bunch. After creating an interesting horror game in Little Nightmares, they set their sights on the colorful world of co-op working with Nintendo. The result is The Stretchers, a surprisingly fun one- or two-player game that sees you picking up patients and driving back to the medical centre. The game has a lot more going on beneath the surface than that relatively straightforward premise, though. The Stretchers is a surprise through and through and hopefully it won’t get lost in a busy stretch of Switch releases.

In The Stretchers, you play as two medics who have a serious problem on their hands. A weird phenomenon, named the Dizzies, is spreading like wildfire across Green Horn Island and only they can save the day. Players travel across the island, making various stops at a variety of destinations. With a stretcher and a rather unbreakable ambulance in tow, the goal is to accrue injured civilians and bring them to safety. At the hospital, the De-Dizzler 3000 brings them back to normal and combats the evil machinations of the goofily named Captain Brains. Yes, all the names are that silly and I love it. 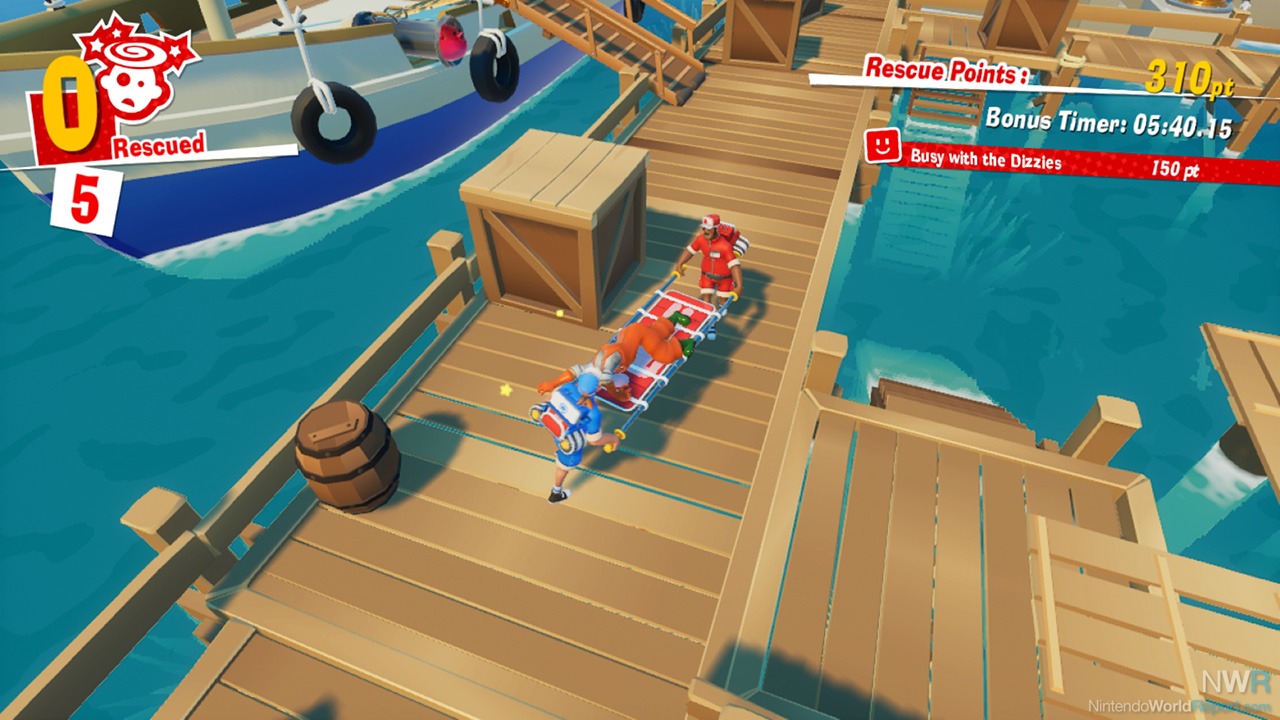 The gameplay is intriguing in its physics-based insanity. After arriving at a location, the mission starts and the medical duo have to gather all the dizzy citizens at the ambulance within the allotted time. While you can continue playing beyond that point, you receive far less points for your efforts. Similar in a Crazy Taxi sort of way, it is important that you keep trucking. In one of the early levels, you have to find everyone within a sawmill farm, which is just as dangerous as it sounds. Luckily, there are ways to pull everything in your favor. Assembly lines automatically move bodies from one place to the next, minimizing the time you need to carry them on a stretcher. The trick is working within certain limitations and obstacles, and getting the most out of your time. By replaying stages, you can map routes perfectly, improving on your score in the process.

Every little thing that you do in The Stretchers gives you points. This starts by exploring a level to the fullest, and getting special items that are worth more points. The techniques of carrying citizens, interacting with objects and moving the action along can be critical in how you are rated. The game further encourages this within the pages of a sticker book that track special objectives to complete in each stage. A final push in points can be made while driving the ambulance. By knocking over signs or doing crazy stunts, you are rewarded further trinkets for your efforts. It is super rewarding to play.

That being said, I do feel that the game is better served as a co-op title. The Stretchers is totally playable alone (and with a Pro Controller) and it isn't as frustrating as it might sound. At the press of a button, one medic automatically follows the other around so you don’t need to control each medic with a separate analog stick all the time. That being said, in the moments it mattered, I feel that two heads will prevail quicker as they can each focus on their own initial tasks. While you technically play as two people alone, you are still doing one task at a time, which slows down the action. An important note is that multiplayer can only be enjoyed with two Joy-Con, so if your friends rather play with traditional controllers, that is something you can't do. All in all, though, it isn't as restrictive as Snipperclips and feels more flexible overall. 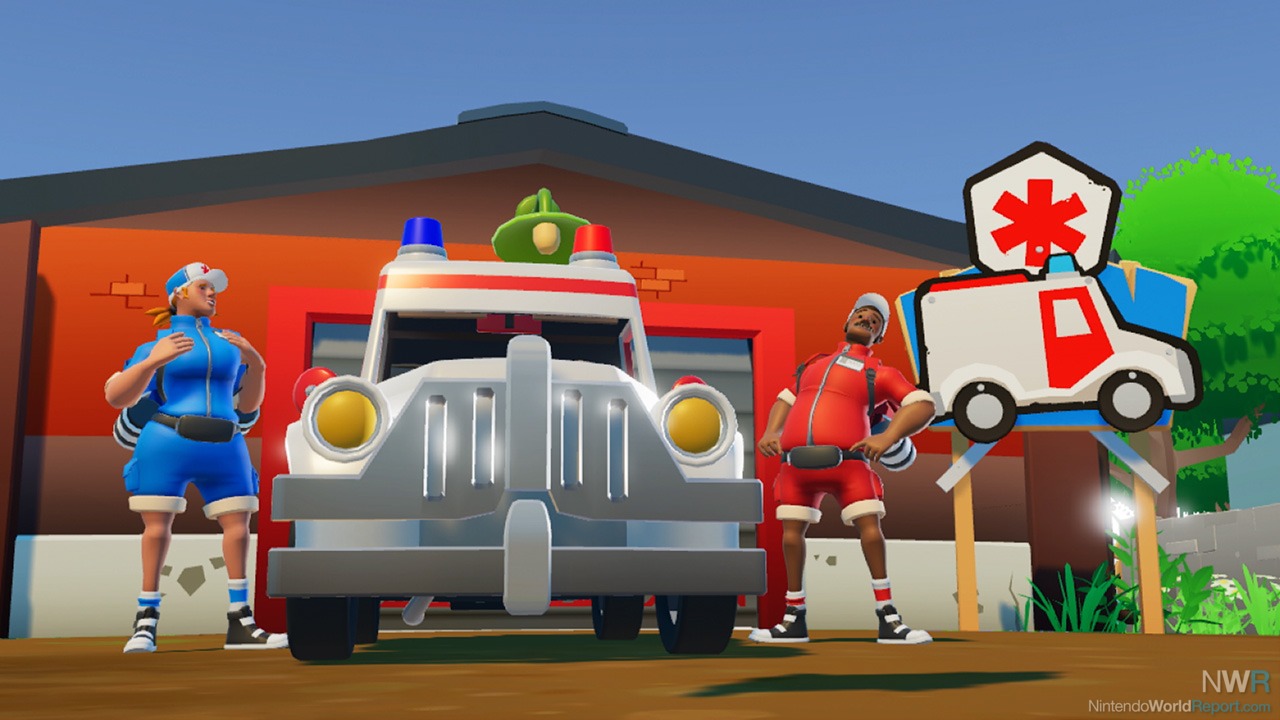 Regardless of the controller you play with though, I did have some trouble picking up objects a few times. The game wanted me to stand a certain way, which caused some frustration in the heat of the moment. In other places, the stretcher doesn't exactly want to work with you, throwing off all the patients in the process. These aren't things you can't deal with, but it did cause some annoyance when I wanted simply to get the job done.

The Stretchers took me about six and a half hours to complete. While the focus is on the core missions, some additional stuff is littered around the map. During your exploration excursions, it is possible to find hats for your characters or furniture for your home base. It isn't much in the grand scheme of things, but it added to the fun world building The Stretchers offered. I found myself constantly engaged with not a moment making the pace slow down. Speaking of slowdown, the presentation is pretty solid. The characters have this goofy look that I absolutely adore. The music and atmosphere really helps to sell that feeling overall.

The Stretchers is quite an enjoyable romp. It shows strongest in co-op, but the adventure is still strong overall, whether playing alone or with a friend. The various missions and interactive elements ensured that the pace never slowed down. The gameplay loop of riding to places, exploring a bit, grabbing patients, and moving back is extremely novel and engaging. With every mission introducing unique attributes, it is always a delight to see what curve The Stretchers throws at you next. There were a few minor problems, mostly with precise movements, but never anything that soured the fun. Overall though, I can't help but admire the things Tarsier Studios put in. The Stretchers is a good time.