It's better than Amiibo Festival

Picture this: you press “A” on your Joy-con. A stack of rollie-pollie Tsums Tsums are rolling under each other to entertain you while you wait for the game to load. The screen literally (and kind of violently) explodes with color and sound. Welcome to Tsum Tsum Festival. What is a Tsum Tsum? Good question. For all of our friends who are not aware, a Tsum Tsum is a fluffy, bean-shaped, plush toy that is stackable. The word “tsum tsum” literally means “stack stack” in Japanese. Enter Disney stage right. Put them together and what do you got? Bippity boppity fluffy friends. Tsum Tsum Festival has nearly all of Disney’s characters recreated as a Tsum Tsum: Elsa, Pooh Bear, Baymax, Flounder, and even Darth Maul! So why would you want them in a video game? Well, friends, because Disney and Bandai Namco are evil geniuses.

Tsum Tsum Festival is a family-friendly party game that allows players to explore a variety of different mini-games. It is the arcade experience brought into your home. You can play air hockey and coin drop, experience the frustrations of curling, and desperately try to time your Joy-con swing to the tempo of a rhythm game. It’s even got a Pac-Man style game with Disney villains as the enemies.

For a game centered around the multiplayer experience, it’s unfortunate that there is a relatively limited number of mini-games. Only 12 mini-games makes for a very short festival, indeed. Instructions for those mini games can only be found if you play each game separately. If the player chooses to play the Tsum Festival Tour, where games flow one after the other, they will not be given the instructions to the games. This can be a problem in situations where not everyone has played every game. While Tsum Tsum Festival can also be played online, the functionality is locked behind Nintendo’s online subscription service. Unfortunately, this also applies to the online leaderboards, so you’ll need to pay up to get the full arcade experience. When playing portably, you’ll also have access to the popular Disney Tsum Tsum mobile game. This game can only be played with the touch screen and is a spin on color matching games like Puyo Puyo. It is a nice quick distraction for when you have your Switch on the go.

The music sounds almost like classic Disney songs. Every once in awhile I would think “Oh, is this from Beauty and the Beast?” The answer was no. The one tried and true Disney song you cannot miss is the Mickey Mouse song, but it’s techno. I found that the controls felt loosey-goosey for games that require the Joy-con gyroscope. The majority of the mini-games require some form of motion controls, and it became unnecessarily challenging to play games like Tsum Rhythm, a barely functional Dance Dance Revolution knock off, and Ice Cream Stack, a game about catching falling scoops of ice cream in your cone. Fortunately, the mini-games are extremely forgiving.

Tsum Tsum Festival is not built to produce a competitive atmosphere, but is rather a heart-warming collection of mini-games. My husband, John, and I played most of the games in a cooperative mode because, frankly, it was way more fun. But if you’re going to have John on your team for Bubble Hockey, for the love of Tsum Tsum don’t have him guard the goal. 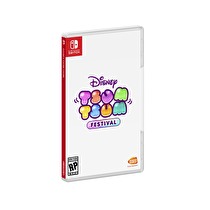