Although the Disgaea series re-releases on Switch began with the greatest hits set that was Disgaea 5, NIS America has gone back to fill in the gaps with Complete Editions of Disgaea 1 last year and now the fan favorite Disgaea 4. Although the gameplay is extremely familiar, what really steals the show with Disgaea 4 is the quality of the performance. 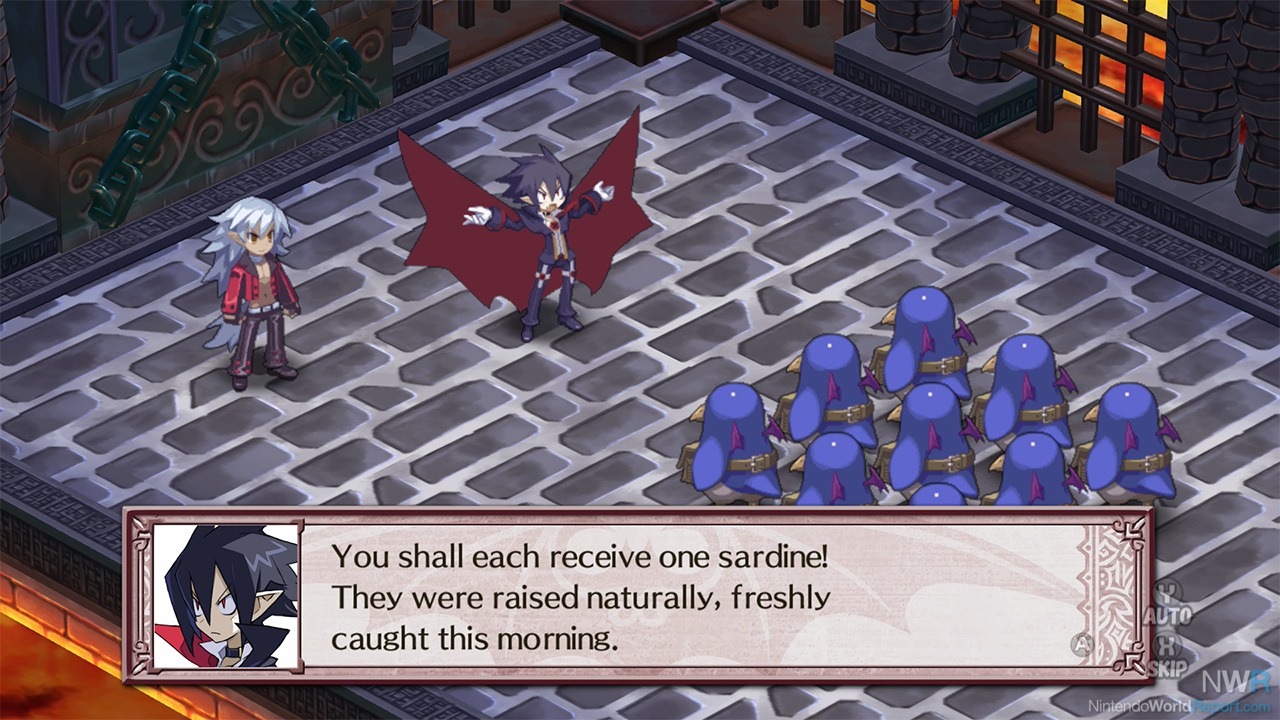 Like its Switch predecessors, Disgaea 4 is a strategy/RPG hybrid with a major focus on grinding. There are twelve “episodes” in the game that form the main story, each with multiple segments that usually end in battles. The battles themselves take place on a grid that’s viewed from an overhead, angled perspective that can be rotated with the shoulder buttons on your Switch controller of choice, and most of the maps proceed until the enemy or you run out of units. Your units are pulled from a spawn point and moved around the map, with options to engage the enemies and—if enough people are in range—perform high-damage combo moves (which the enemies can, and will, use against you). Maps have different heights, attacks have ranges, and frequent modifiers called Geo Blocks can provide buffs or make other changes to how the squares act. I tried to destroy a lot early on but found that I was having difficulty wrapping my head around them so I just worked around them. There’s no permanent death in Disgaea: after each map, there is an option to return to a home base to heal up, buy items or armaments that change over time, or make other modifications to the party.

D4’s story frequently left me with my mouth agape, when I wasn’t laughing hysterically at it. The leader of the party is the vampiric Valvatorez, who at the start of the game is an instructor for the Prinnies (the mooks of the Disgaea series). After training them in explosions and proper use of the word “dood,” Valvatorez finds his latest class abducted by the “Corruptement,” who think there are too many souls in hell at the moment and are destroying the Prinnies because of it. As he had just promised his new graduating class sardines, this will not stand, and Valvatorez and the rest of the party set off to save the Prinnies and destroy the private equity firm that is the Corruptement. My description of the story can’t do it justice: Troy Baker’s Valvatorez should be a career-defining performance, and the rest of the cast nails their parts in the totally absurd storyline as well.

Since Valvatorez is trying to destroy a corrupt government, he’ll need to replace it with one of his own, and thankfully out of battle he can do just that. One of the modification options available between battles is a Senate, complete with the ability to pass laws such as “increase the budget” which will increase the amount of money won in a battle. This is all run through a Cam-Pain headquarters, which is a level of punnery I can appreciate. The HQ also has the ability to place items and characters in it to strengthen your majority: most bills won’t pass without some outside help *coughbribingcough*. Since there’s only one set of shops in the game, they offer a loyalty program that offers higher rewards the more you buy.

If there’s one fact of life in Disgaea, it’s that you have to grind. A lot. After beating a story stage I would grind for 20-30 minutes, only to see that a leading guide for the Vita version (which the Switch uses as a base) suggested doubling that time. Forget a four-digit HP cap, this game’s LEVEL cap is 9999. Such grinding is not only needed to make it through the story, but also if you want to last any amount of time in the Item World. Item World is a randomly-generated series of battles that you have to complete 10 floors of to see any benefit, and the main thing keeping my team alive was the insane amount of grinding necessary just to make it to the 10th floor. If I didn’t have other things to move on to, I could spend a thousand hours just grinding to go deep into Item World. Eventually though, I just had to move on. And unlike Disgaea 5 on Switch, where I was able to avoid a lot of the grinding by using the included DLC to give myself enough money to buy the world, the “cheats” in 4 only give increases to money/mana (for skills/experience) in 10% increments and have to be earned through play.

The isometric perspective combined with the environments I was sometimes in made enemies difficult to see on occasion. (PROTIP: Don’t do Item World runs in a doctor’s office waiting room.) Aside from that, the characters stand out well and the backgrounds aren’t all that distracting. The music is using a lot of tracks that I remember from other games, but they’re still solid, and as mentioned above the voice actors are amazing here.

If I didn’t have a pub’s worth of RPGs on the Switch already to deal with, I could see myself putting thousands of hours into Disgaea 4 Complete+. The story is a blast, and the combat is addictive enough while also being a nice change from the huge maps of Three Houses. Right now, D4 is the best bet if you’re looking for some humor to go along with your strategy, dood.