Retro events and some special offerings make this a grand party game!

A new iteration to the Mario & Sonic franchise is something I always look forward to. Some are better than others, but above all, they promise a good time with friends and family. A personal favorite is the version made for the Summer Olympics of 2012 in London. It was the first game to allow for button input, and added a variety of side content to keep you trucking. While this new game doesn't go that far in scope, this is the best since 2012 and easily the one I can see myself playing with the people around me. In my mind, the good Olympic video games are back in town.

Let's start with the big inclusion within Tokyo 2020: the Story Mode in this version actually includes a story. Shocking, I know. Our favourite crew of Mario, Sonic, Bowser and Dr. Eggman get sucked into a video game based on the Olympic Games of 1964. Their goal is trying to escape and return to the modern Tokyo, where Luigi and Tails are trying to find their own solution. You will switch constantly between the past and present with two maps, various activities and amusing interactions. The developers have actively tried to put in the effort, even if you're mostly going from mission to mission. 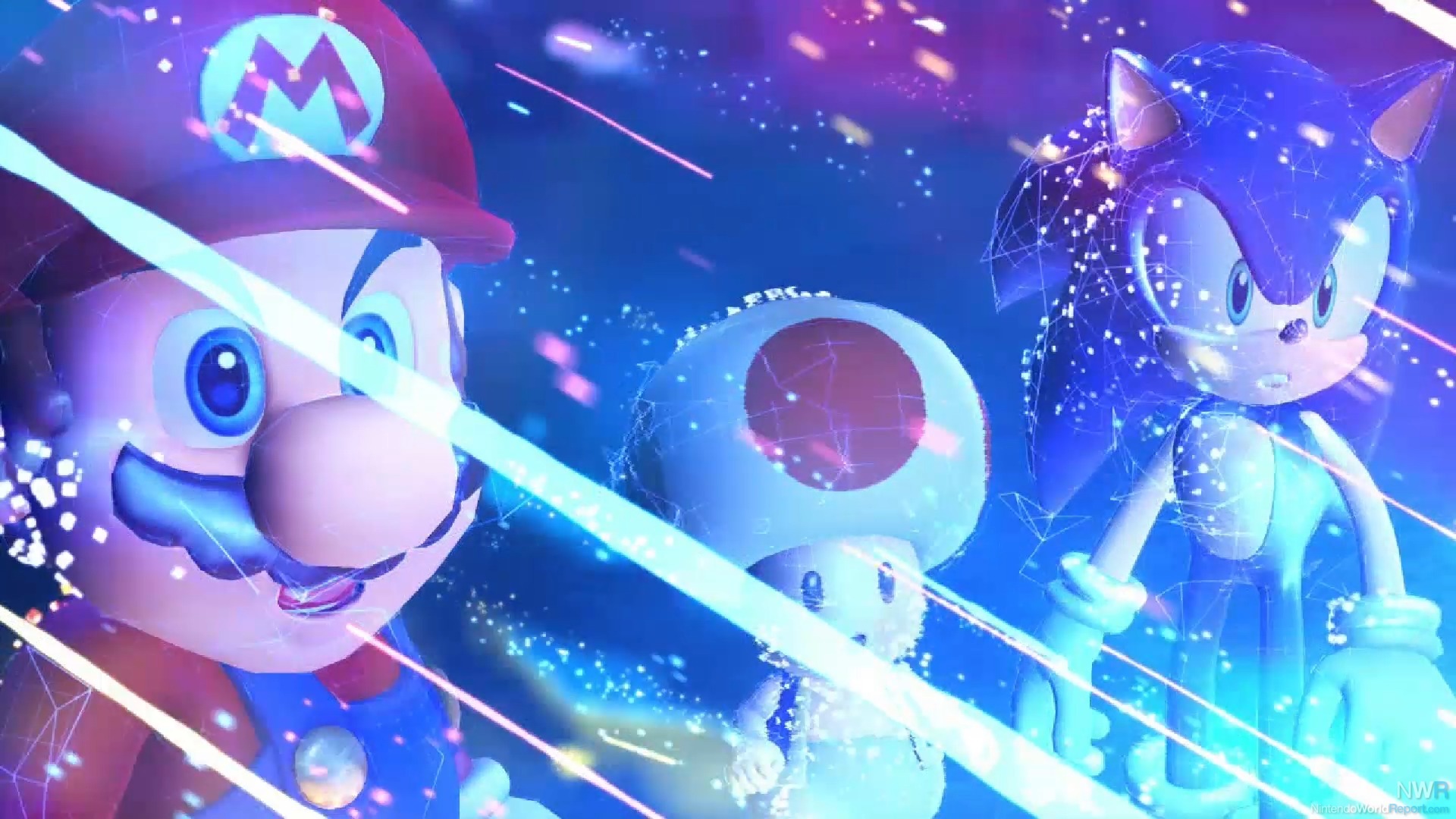 I'm pretty surprised with how Story Mode is set up. The map of each offers unique locations to visit and uncover. They are small areas where you can talk with anyone at hand. Not only did they recreate arenas, but also big Tokyo landmarks like Tokyo Skytree. It’s very neat, but never anything deep. You learn about your surroundings, participate in an activity and go onwards to the next location. Sometimes there are trivia terminals where you can learn even more, but that is mostly it. Personally, I would like the Story Mode more if the locations were a lot bigger and more explorable. You will see glimpses of the possibility, but Mario & Sonic Tokyo 2020 never goes truly all the way. That being said, Story Mode is a nice five hour rump with some nice flavor text between characters.

The ultimate goal in Story Mode is obviously to see the end, but you do earn some stuff as a result of playing. When competing in the various modern events, you will come across a new character. By winning against them, like Rouge in Sport Climbing, you will earn the right to play with them in all other modes for that one activity. Ten special minigames are sprinkled across the adventure, which are available after completion into the Game Room. It’s where you can freely enjoy these activities and experience longer versions of them. A highlight is the Bullet Train Blast, where Sonic tries to chase Dr. Eggman traveling in a Bullet Train.

Speaking of activities, the majority of folks will likely head straight into the Quick Play and enjoy the various sporting events available. Tokyo 2020 offers the normal 21 3D sports minigames, three Dream events and finally the ten brand new Tokyo 1964 offerings. That makes for 34 events that you can play on a whim, which is certainly impressive. The offerings are rather pleasant as they support both motion and button controls. While motion was okay, I found myself entranced by the button controls. Not only does it feel more accurate, it creates a more equal playing field. You get the hang of the buttons just a touch quicker, and it feels a lot nicer in practise. Not every motion controlled option feels exactly great, though the dual Joy-Con supported games are pretty neat. 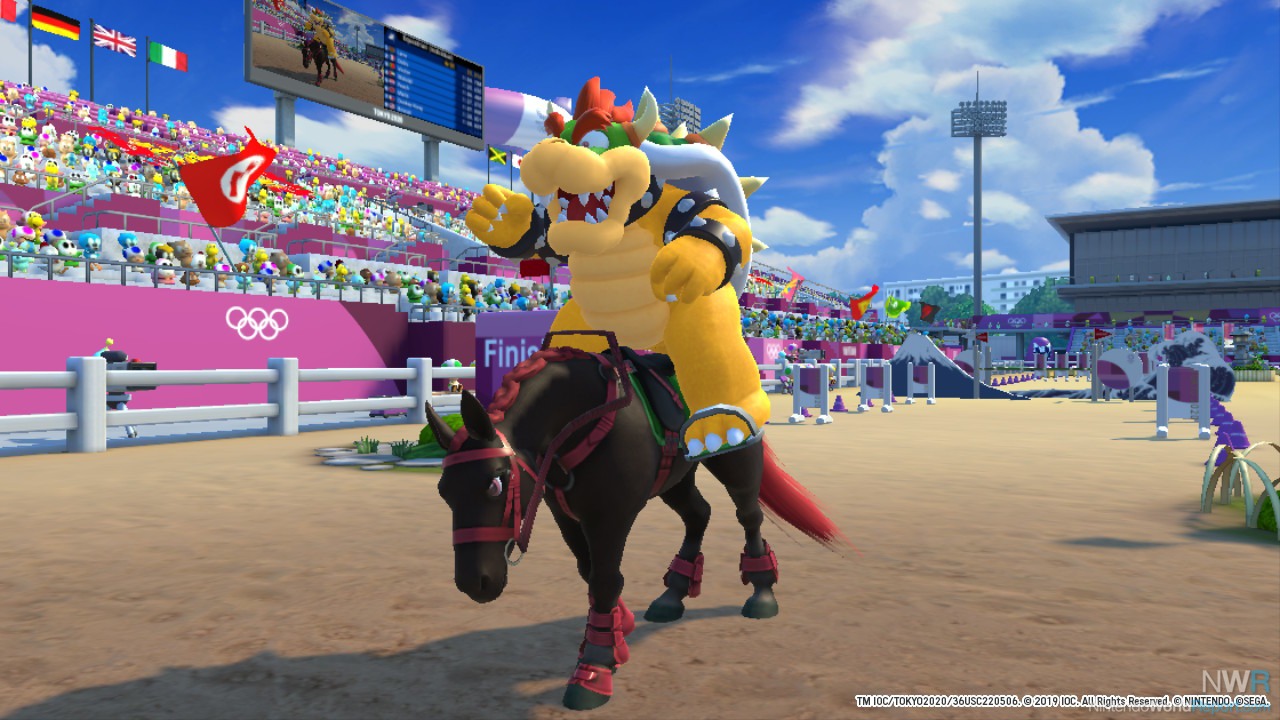 I’ve stuck with the most basic Tokyo 2020 events so far, with Football, Skateboarding, Sport Climbing, Fencing and Rugby Sevens being the highlights. Events are short and snappy which ensures they don’t overstay their welcome and allow you to mix it up. You do have some control over how long some events are, such as adjusting the playtime or the amount of points required to win. In addition, the CPUs can put on a specific difficulty setting. While the selection is good, I do feel that some events from the previous title are oddly missing. Some enjoyable events such as Rhythmic Gymnastics, Beach Volleyball and BMX didn’t return. Honestly, I find that a little odd as the game rhythm game feel of gymnastics was always really endearing. Besides that, some of these events are in the regular Tokyo 2020 game, which makes it even weirder.

Another point that I find really odd is that the character roster hasn't seen major changes over the last few installments. The same 20 characters as before are playable in all sports, while the other ''guest'' characters are exclusive to a singular sport. For example, do you want to play as Rosalina? Well, you will have to play Surfing in order to see her in action. Instead of adding characters, they have been removing them, as some participants are no longer in Tokyo 2020.

What we have lost in the regular sports, we’ve gained within the other events. The three Dream Events: Dream Racing, Dream Shooting and Dream Karate, are good fun and add a fun party vibe that was missing from Rio 2016. In Dream Racing, you ride on a skateboard down a course in the sky and grab Mario Kart-esque items. Dream Shooting sees you exploring the grounds of a Japanese temple as you shoot at targets and kites, with racking up combos being essential to stay ahead of the curve. Dream Karate takes place in the Mushroom Kingdom of Super Mario Odyssey. You will have to hit your opponents so that they end up landing on panels, changing them to your color and icon, and earning you points in the process. 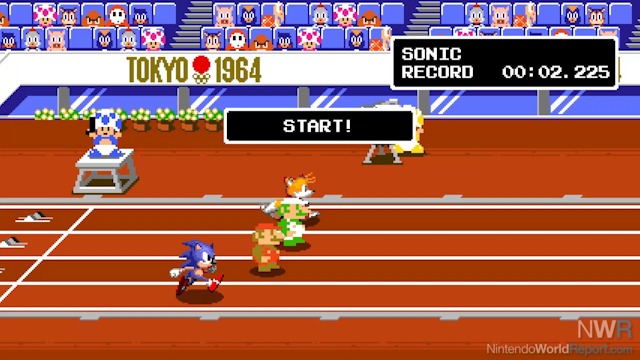 Finally, we have the ten Tokyo 1964 events. These 2D events either bring classic sports to the table or provide unique twists on events you've already seen. These minigames can only be played with buttons, regardless of the controller you're playing with. The standout of these events is the 10 meter platform. It is here that you will jump from a diving board and then have to press a selection of buttons in time before reaching the water. Input them correctly and you are quickly awarded with more points. Another lovely game is Marathon. It is here that you have to keep up the pace by pressing A, avoid obstacles and pick up water to keep up your stamina. The minigame is smartly put together and easily brought a grin to my face, mostly due to how silly the characters roam about.

No shortage of options are available to enjoy Mario & Sonic Tokyo 2020. Beyond the single-player and single screen multiplayer is a Local Play option in which you can connect up to four Nintendo Switch systems and play on your own screen. More importantly, however, is the Online Play Mode. Not only can you share your records with the entire world, you can play against your friends. All the regular and Dream events can be played in three ways. You have a Ranked Match mode, in which you will be grouped with players of a similar skill level. By ranking high, you will climb the ladder.

If you prefer to play for fun, no worries at all. In Mario & Sonic Tokyo 2020, you can select an event and play with others who want to enjoy the same one as you. It’s the quickest way to hop into an online match and start playing. Players can also gather and play in rooms, similarly to how Puyo Puyo Tetris did it. You choose Worldwide, Regional or Friends and then select the max number of players allowed. Players can send each other messages to decide what you want to play, and then simply get started. The way the options are put together is simple, but it all works extremely well.

Tokyo 2020 looks great on Nintendo Switch. The title is filled with nicely detailed arenas, those big Tokyo landmarks and characters are a joy to behold. The loading times are a teensy bit annoying. Not overly much mind you, and it is clear that they put performance at the forefront, but you can't deny that they are there. The music is, without a doubt, one of the better aspects. The tunes of Story Mode in particular are real sharp with a mixture of Japanese and orchestral sounds. That being said, the individual activity songs aren't too shabby either.

Mario & Sonic at the Olympic Games Tokyo 2020 is a surprisingly fun game with a lot to offer. The Story Mode is somewhat amusing and easily goes by in five hours. While I wish there was more interaction with the modern world, I can't deny the effort at least. That being said, the real star of the show are the activities themselves. With 34 minigames to choose from, this is one of the most packed games in series history. It helps that the button controls work quite well, and help to sell the experience just that teensy bit more.