There are three genres most indie developers will tell you to stay away from until you’re especially skilled, all for their own reasons: MMOs, rhythm games, and most of all fighting games. A majority of indie fighters tend to be subpar and only really good for a laugh, but every once in a while one rises up. Lab Zero’s Skullgirls is one such example, an indie darling fighter with a fascinating history and a memorable cast of characters. Despite a few issues here and there, it's easy to see how Skullgirls sets itself apart, but its flaws do detract from what is otherwise an excellent experience. 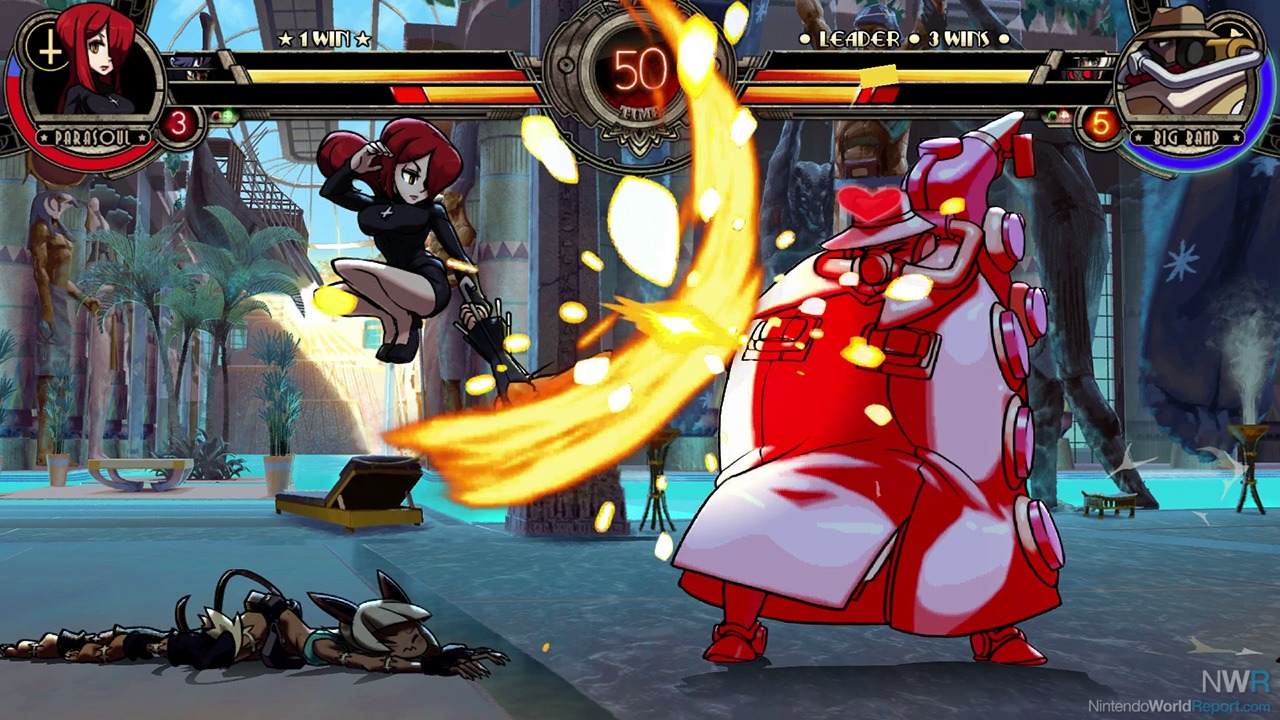 The story of Skullgirls takes place in the city of New Meridian, home of the mystical Skull Heart. It is said that every 70 years the Skull Heart will grant one girl’s wish, but if that girl is not pure of heart, she will find herself instead transformed into a powerful monster known as the Skullgirl. When a new Skullgirl emerges, various powerful beings from around New Meridian come out of the woodwork in order to defeat her and obtain the Skull Heart, whether their intention is to destroy the cursed artifact or attempt to claim its wish for themselves. From mob muscle, to parasitic monsters, to disgraced wrestlers, these titans are about to clash on the streets in their journey for the Skull Heart whether those streets like it or not.

Gameplay-wise, Skullgirls is pretty much exactly what you’d expect, with a few twists. Characters control as they do in just about any other traditional fighting game, with light, medium, and high buttons for punching and kicking as well as specific directional inputs like quarter circles to do special moves. If you aren’t a big fan of fighting games already, Skullgirls probably won’t change your mind, but if you’re like me and enjoy fighting games despite being bad at them, then Skullgirls has you covered with extensive tutorials teaching you just about everything you need to know about how to play the game effectively. Another unique feature of the game is the ability to play as a team of 1, 2, or 3 characters, with each character’s strength and health being tweaked to compensate for how you choose to play.

Alongside the genre’s expected multiplayer, Skullgirls also contains a few options for solo play, though sadly it feels a bit lacking. As is the norm, each character has their own story mode scenario, usually introduced by a short visual novel-style cutscene with a few more of those cutscenes peppered in between fights. They do not contain any voice acting whatsoever, even seeming to lack the occasional vocal grunts, making them pretty boring to watch even when the writing is fun overall. At the end of a character’s story mode, they will come into contact with the Skullgirl herself, a young lady named Marie. Like your average fighting game final boss, Marie plays by a different set of rules, with the player being unable to stun her and her attack and health being far higher than usual, meaning inexperienced players will likely find her fight incredibly difficult. This is not a serious problem, but it is a bummer when you realize that a large number of stages are locked behind completing story mode with every character. A few smaller issues also exist, stemming from various unrelated parts of the game. Online play seemed to be shoddy when playing on wifi, though anybody with an ethernet adapter and a wired connection will probably find the game performing just fine online. Every so often, certain voice lines would play loudly several times in rapid succession, as if the recording had a heavy reverb effect placed onto it. I was unable to ever find a reason for this occurrence but noticed it happening at least once every few matches. The inputs on the character select screen may also be confusing to new players, as instinct says that pressing the B button would take you back or unselect a character. This is not the case, however, as all four face buttons select the character (with the color pallette specifically being selected by which one you press) and the Minus button serving as the back button, which just didn’t feel intuitive against years of gaming instinct.

Overall, Skullgirls is a wonderfully charming fighting game, with an incredibly memorable cast of characters all represented by gorgeously animated hand-drawn sprites that just make them feel alive. From Peacock and Parasoul, to Beowulf and Big Band, you’re more than likely to find a character that appeals to you or your playstyle among the cast. The experience is especially heightened by the fantastic jazzy soundtrack provided by Castlevania composer Michiru Yamane. As stated before, if you’re not a fan of the genre as it is, Skullgirls probably won’t change your mind, but if you’re interested in fighting games or already enjoy them as a whole, this is one title you should probably pick up.

If anyone has the expertise to make a fighting game, it's MikeZ; a former Pandemic studios employee who did a lot of the battle design for the original Star Wars Battlefront 2. He also has attended multiple EVOs as one of the top Blazblue players in the USA, if not the world. This has led him to work with Ark System Works and Capcom as well to assist with balancing in games like Blazblue: Continuum Shift and Ultimate Marvel Vs. Capcom 3. You can probably draw a lot of paralells between Skullgirls and Marvel Vs. Capcom with how it handles it's 3 on 3 gameplay with assist buttons and a Delayed Hyper Combo (DHC) tag system.

I own each LabZero engine game across various platforms, and I would say that OG Skullgirls is where I sat down and actually tried to understand how 2D fighters worked. I never got good back then, but it was the first time I ever really sat down and tried to hit buttons meaningfully besides spamming special moves or such. It was the first time I learned combo trials. It's where I learned my love for grapplers in fighting games. Cerebella was such a fun character design that I tried her, loved her, and it made me appreciate characters in fighting games of old that I had previously taken a pass on, like Iron Tager, Zangief, Clark Still, Potemkin, etc. I also truly learned what zoning was and how to effectively do it because Peacock's suite of tools was so robust and surprisingly easy to use on that front!


I actually would go on to back 2nd Encore's crowdfunding effort. At the time it wasn't called that, and was more-or-less just funding to help Skullgirls get out from under the thumb of then-publisher Konami with the reward being a DLC character in the form of Squiggly, with stretch goals letting the backers determine who among the colorful cast of background characters would get to step into the fight. Of course, I didn't exactly back to participate in this, but rather because one of the stretch goals was to pay licensing fees for the LZ engine for another up and coming indie developer who would go on to make a fighting game that's been incredibly important for me.


As a result of hand cramps I was having at the time, I really didn't put much time into 2nd Encore. I've since solved the hand cramp while playing fighting games by getting a fight stick. I think if I revisit 2nd Encore, it'll be on my PC copy.


For now though, my mind is on that OTHER LZ engine fighting game. If THAT comes to switch, BOY HOWDY am I double dipping so I can body the poor sap who gets stuck with a review code for that. <3