My initial abstract was more of an homage to Andrew Ryan’s signature phrase, “Is man not entitled to the sweat of his brow?” from BioShock, a game that Close to the Sun will undoubtedly draw comparisons to. I decided against that, however, because Close to the Sun is a very different kind of game; there are no splicers, no combat, no Circus of Value. Instead, this game takes more inspiration from something like SOMA in terms of both gameplay and atmosphere.

You play as Rose Archer, an investigative journalist who arrives onboard a massive ship called the Helios after receiving a letter from her sister, Ada, asking for help. The Helios is a city-sized cruise ship built by Nikola Telsa, who in this universe beat Edison and is the richest man in the world. He employs a multitude of scientists to develop new theories and inventions, the latest of which threatens life on the Helios. When Rose climbs aboard, she’s one of the only people left alive on the ship.

A bit like BioShock and SOMA, you explore the Helios from a first-person perspective while various people chat in your earpiece giving you information and directions. Much of the Helio’s tragic backstory is told through, you guessed it, letters and documents left around the ship. At first, you’re just talking with Ada, trying to figure out where to meet, but before too long you’ll be getting help from Aubrey, a scientist who’s holed up somewhere and needs to be rescued, and eventually Mr. Tesla himself.

Games like this live or die based on their settings, and I can assure you that the Helios is an amazing piece of digital architecture. Like the benthic city of Rapture, a pervasive art deco theme dominates the public spaces, but the more industrial parts of the ship, like the laboratories and freight tunnels, have a contrasting industrial efficiency that I appreciated. Of course, Rose’s path is never straightforward, with requisite trips through dangerous areas in order to bypass blocked paths or broken equipment. Close to the Sun does, however, feature an intensely creepy atmosphere and there are a few jump scares and moments of real tension throughout. 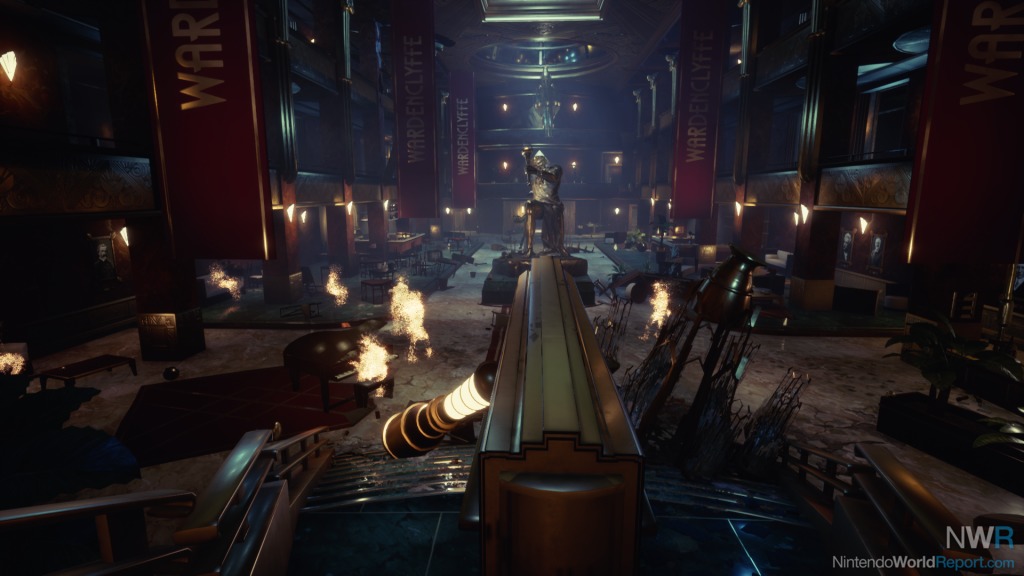 Pretty though the game may be, this port suffers from some very unfortunate technical issues. First and foremost, Close to the Sun’s framerate is extremely variable, especially in large areas. This is confounding to me, because for 95% of the game, there is no action; you’re simply exploring the ship. If the framerate chugs while turning around, that’s a real problem. Aliasing is also rampant in areas with poor lighting. In fact, the game is often way too dark, and I kept wishing that Rose had a flashlight. Adjusting the game’s brightness settings don’t seem to offer much relief, either. Small objects often pop into existence as you approach them, as do many of the game’s textures—you can look at a blurry sign on the wall and after a couple seconds it will POP into focus. Do not play this game in Handheld mode.

The framerate problem really cripples the occasional chase sequences that you’re forced to endure. Sometimes, Rose is set upon by a crazy dude with a steak knife or an otherworldly horror (it’s not all petri dishes and Bunsen burners on the Helios, kids) and must FLEE by holding down a shoulder button and hoping she goes the right way. Because the game tends to have a seizure during these moments, it’s incredibly easy to miss your turn, hit a wall, or simply not dodge around objects fast enough to avoid being repeatedly stabbed. There is very little room for error here, so expect to die a lot before you find the right path and get to the end of it (one hint—if you see an “interact” icon some short distance away, start hammering that Y button while running towards it because that seems to suck you towards the thing you’re supposed to vault over). 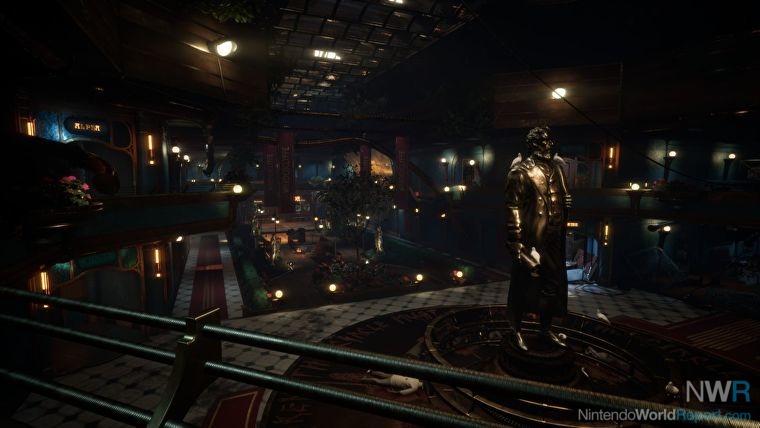 Aside from that, the darkness, coupled with a few very large environments, make it easy to get lost. There’s an apartment complex area that had me cursing the game under my breath. It really needed a map or, at the very least, much better lighting, so I could easily differentiate the different quadrants of the two-story area. Most of the game is fairly linear, but when it asks you to wander around huge spaces, Close to the Sun is its own worst enemy.

The tragedy of what befell the Helios is uneven in execution, occasionally sigh-inducing (the Langoliers stuff), and I still had a lot of unanswered questions by the end. The game’s final third is pretty exciting, but overstays its welcome. The closest I got to a science-based explanation for what went down on the Helios was a brief mention of the “One Electron” theory, which really is a thing, but does not, by itself, seem to have much bearing on the overall adventure, so that was kind of disappointing (your mileage may vary).

Overall, I have pretty mixed feelings about Close to the Sun. I love the setting and the atmosphere, but the technical problems, chase sequences, and lack of story cohesion ultimately left me wanting.