Wanted to be a Ghostbuster this Halloween, but this will do very nicely.

Earlier this month, I told you everything you needed to know about Luigi's Mansion 3. In the hands-on article, I laid out my general feelings and, to be honest, those really haven't changed too much. The big difference is that I can elaborate a bit on certain aspects and give my final thoughts on the overall experience. Luigi's Mansion is essentially a great game with some incredibly deflating moments. There are moments where I absolutely love what I'm seeing, but not every moment was created equal I'm afraid.

Luigi's Mansion 3 opens with Luigi and friends accepting an invitation to a fabulous hotel called the Last Resort. You will get introduced Hallen Gravely, the hotel’s owner, and even get to see the initial inner workings of the place. After those baby steps, Luigi's Mansion 3 goes deep into its ghost-hunting roots. King Boo shows up, traps all of Luigi's friends in paintings, and you have to rescue them. You quickly run into Professor E. Gadd, and together you make a plan to get to the top of the hotel. If you're expecting anything more than that, well prepared to be disappointed. The game plays its cards almost instantly and bets on gameplay for the majority of the adventure. There is something clean about that approach, but I do feel the hints could've been more spread out. When you know the eventual endgame, the journey toward it feels less impactful.

Where I think Luigi's Mansion 3 falters is in not pushing the envelope far enough. Don't get me wrong: it is an enjoyable video game, but I sometimes get the feeling that the developers left potential on the table. If you want a good example of this, you won't have to look further than The Dance Hall floor. While the set-up is incredibly neat—ghosts with groovy outfits swinging back and forth—it is nothing more than that and a boss battle. There is a hallway where you will do additional collecting, but the floor is over before you know it. On the flipside, however, I do honestly feel that there are floors to be admired in all of this. Paranormal Productions is also a tightly-knit floor, but it formed one long puzzle that was incredibly novel in concept. Another floor, the Garden Suites, sees you traveling up a gigantic staircase and entering a variety of rooms. And when I say variety, every single area does something fun and unique.

Luckily, there is enough that the adventure pulls off without a hitch. The various gameplay elements are really fantastic and put me right into the action. There is a fine line between battling and puzzle-solving that comes very naturally, without making a wrong step. The puzzles use mechanics like the Dark-Light, Strobulb, and the brand new Suction Cup. I wouldn't say I was overly challenged, but I always had to do a solid stroll around before picking up on the next step. An important note is that a good chunk of the puzzles require the help of Gooigi. Whether you're playing in co-op or not, you will need this even greener friend to get past certain challenges. It was far from a bother to me, but I do think it affected the difficulty just a tad. In any case, I do find solo and co-op play have their own specific benefits. 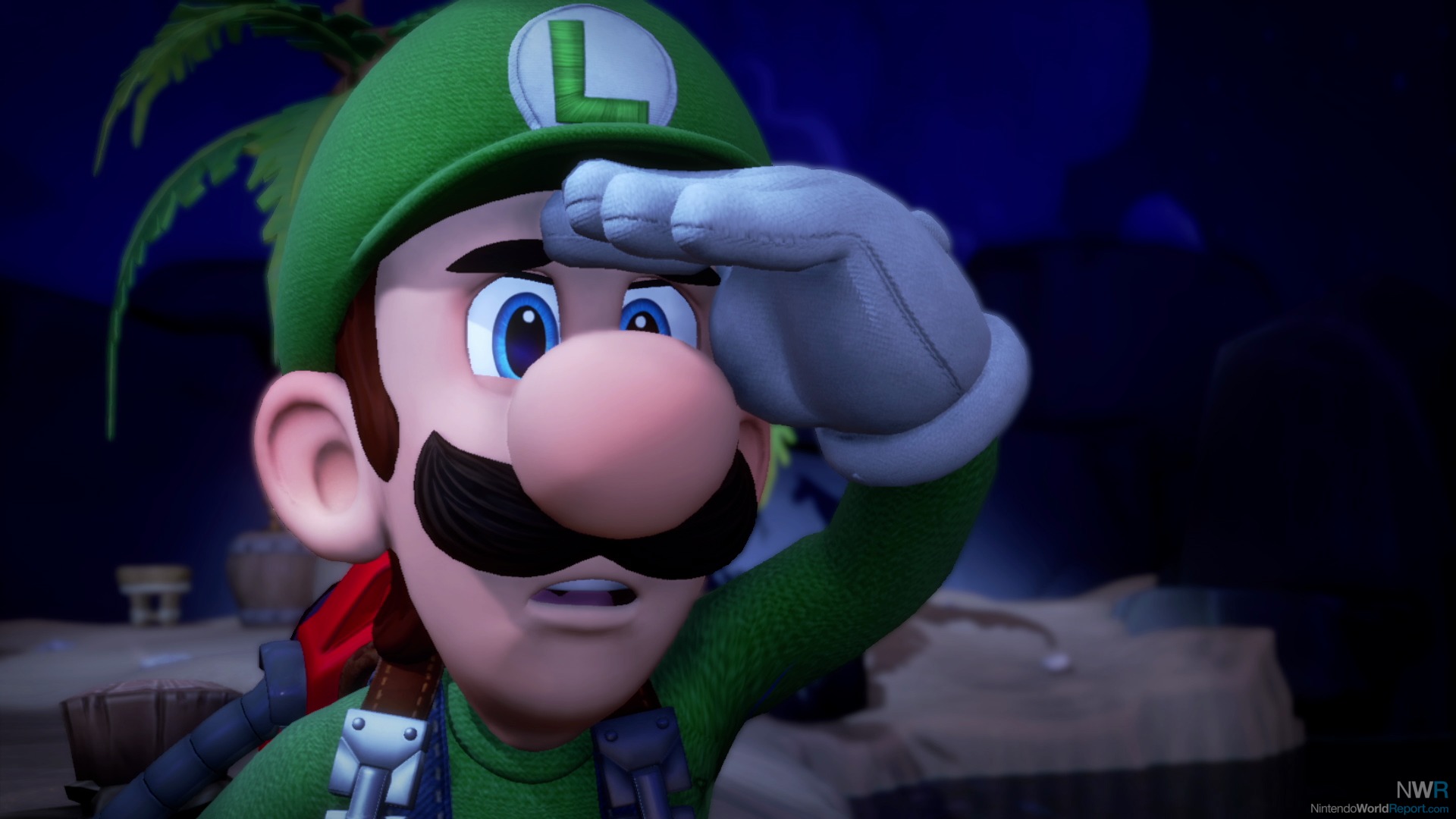 When it comes to controlling the game, I have nothing but nice things to say, frankly. Luigi's Mansion 3 uses the improvements made in the previous entry but builds upon them to further refine the journey. You control your green friends with the joysticks, use ZL and ZR to push air out and suck in, and use the buttons to activate all kinds of functions. What I adore are the details. When you suck up an item that you can shoot, you now have a reticle to showcase where you will be firing that item. Another grand inclusion is the Slam. The feature allows you to damage ghosts multiple times in quick succession. You can even hit other ghosts with the ghost you are currently slamming, making them lose hit points in the process. Even now, after wrapping up the game, I can't stop smiling about it.

If you are only planning to complete the story, Luigi's Mansion 3 takes roughly ten hours to complete. Within those ten hours, you will have seen every floor and fought every boss all the way to the top of the hotel. I found the length reasonable, though there are two asterisks. First, as I said earlier, the game plays its cards way too soon. Secondly, and more importantly, the endgame left me feeling a teensy bit flat. It wasn't bad in any shape or form, and the ending was kind of cute, but not as spectacular as the previous two games in the series. For completionists, there is mostly good news. Unlike Luigi's Mansion 2, where every level had multiple collectibles to snag, the Switch game has streamlined the entire process. Every floor has specific gem stones to find, while the entire hotel spreads around its fair share of Boos. It is a much better method of doing things, and some collectibles are very cleverly hidden.

In addition to the Story Mode, Luigi's Mansion 3 offers two more options to sink your teeth into. First of all, we have the ScreamPark. There are three minigames available in this attraction, and honestly they are just okay. In Coin Floating, players will blow up a floaty and try to collect as many coins as they possibly can. The trick is that if you touch just a single mine, you will lose all your progress and have to start collecting all over again. The trick is to blow up your opponents and have the playing field all for yourself. Ghost Hunt sees players defeating ghosts to earn points. Depending on the ghosts you collect, you will earn more points along the way. The monstrous red ones are worth 12 points, for example. This was likely my favorite minigame as it made fighting the ghosts a battle of who can do it the best. There are even items and hidden ghosts in gravestones to add an additional twist. Lastly, there is Cannon Barrage. You will load up cannons, shoot at targets and score points. The trick is to keep stealing your opponent's balls so that they can't make any progress. While I thought that the idea was cool, the scope was far too limited. With just two cannons, there is a lot of scrambling going on. 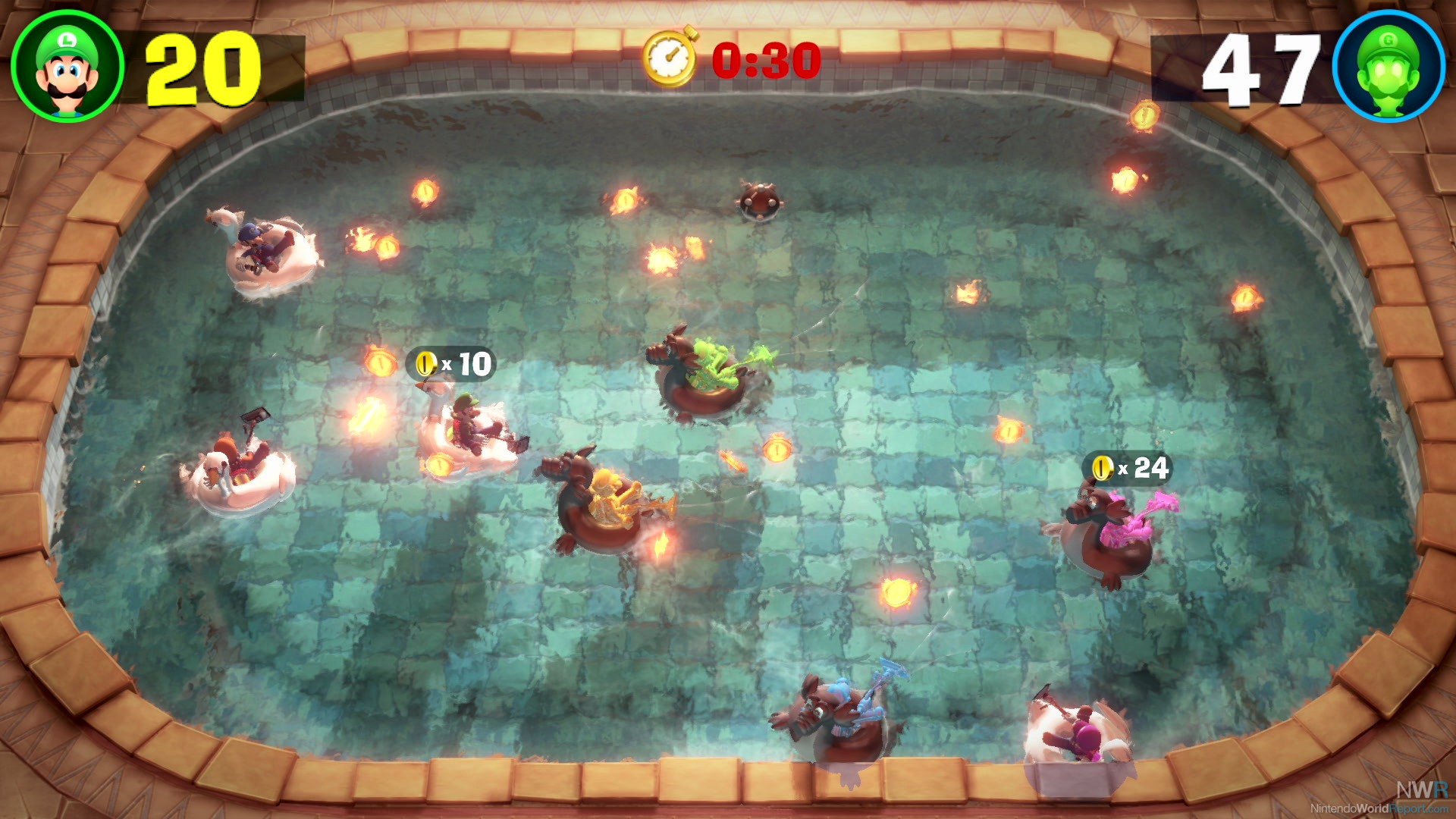 As well, and more importantly, we have the ScareScraper multiplayer mode. While this makes a return from the previous outings, the mode's scope has been heavily reduced. The version in Luigi's Mansion 2 had multiple modes to play through including Hunter Mode (where you solely collected ghosts) and Polterpup Mode (where you chase those adorable ghost dogs). In addition, there were updates you could get for your gear and rising stacks for up to 25 floors. The new version strips it down to the basics with four different objectives being mixed and matched. You will try to capture all the ghosts, find a certain amount of money, defeat a bunch of crows, or save four Toads. The number of floors you can climb won't go higher than 5 or 10, even if you pick the random option.

With mechanics out of the way, I do think that ScareScraper is still very enjoyable. The mode can be played over either local wireless or online, both with randoms or friends. It is even possible to bring a friend along and let them play as Gooigi, making this effectively an eight- player mode. In a lot of ways, I felt that ScareScraper was actually harder than the main campaign. The team really has to work together, give each other their own objectives, and finish the floor within the allotted time. There are traps and random events that you will constantly have to deal with, too. For example, you might experience a complete power outage, which makes the entire floor hard to see. To help you on your way, there are seven different objects that you can pick up. My favorite is the Power Star as it allows to destroy a ghost simply by touching them. Great stuff.

Luigi's Mansion 3 is absolutely on point when it comes to its presentation. The various character models, environments, and overall look really bring the hotel theme home. The expressive animations are adorable, and gave me some fuzzy feelings all the way through. Luigi's Mansion 3 runs without a hitch either, which makes the visual experience even better. Regardless of what you’re looking for with this game, it certainly knows how to make a first impression. The same goes for the music, which fits well with its various themes. The theme on the Dance Floor was absolutely hilarious, mostly due to the ghost feeling the groove and strolling along.

Luigi's Mansion 3 is a fun time, but not without its fair share of faults. While the gameplay and presentation deserve my highest praises, there are elements I'm less high on. The good and underutilized floors keep going back and forth without there being a real consistent pattern. It doesn't exactly help that the game gives away its conclusion too soon, way before you even come close to it. The ScareScraper is a lovely time as well, though with content being strapped back for a singular, clean game mode. Players who want to continuously enjoy the game might be better off trying to 100% the Story Mode. The collectibles are nicer to deal with now, which makes exceeding those initial ten hours not even a problem. Oh, and that Slam attack is pretty incredible as well.

I am enjoying the game so far. The controls feel a little loosey-goosey, but I may just need to get used to them.

I'm enjoying the game alright so far, but I wanted to flat-out murder E.Gadd in those 1st few hours when both he and the polterpup slap you on a progression railroad they will not allow you to deviate from until you unlock Gooigi. Between the railroading and the frequent cutscenes, I haven't seen an opening section handled this badly since Twilight Princess.

I didn't mind it with Polterpop, but E. Gadd got annoying. He did not want me going to any room but his, because he kept bitching about how long it was taking me to get to his room.