Yeah, that’s how I’d describe the idea of going to my high school reunion.

At the time of writing, my ten-year high school reunion is just two years away, and even just the thought of attending it sends my social anxiety into high gear. For this reason, when I read about the premise of Worse than Death, a horror game made by developer Benjamin Rivers, my curiosity was immediately piqued. A creepy high school is not exactly the most original setting for the genre, but a high school reunion gone horribly wrong does have a lot of potential, and I was excited to see if the game was able to meet that potential head on. Sadly, while it is overall a pretty okay experience, Worse than Death is honestly not much more than that. 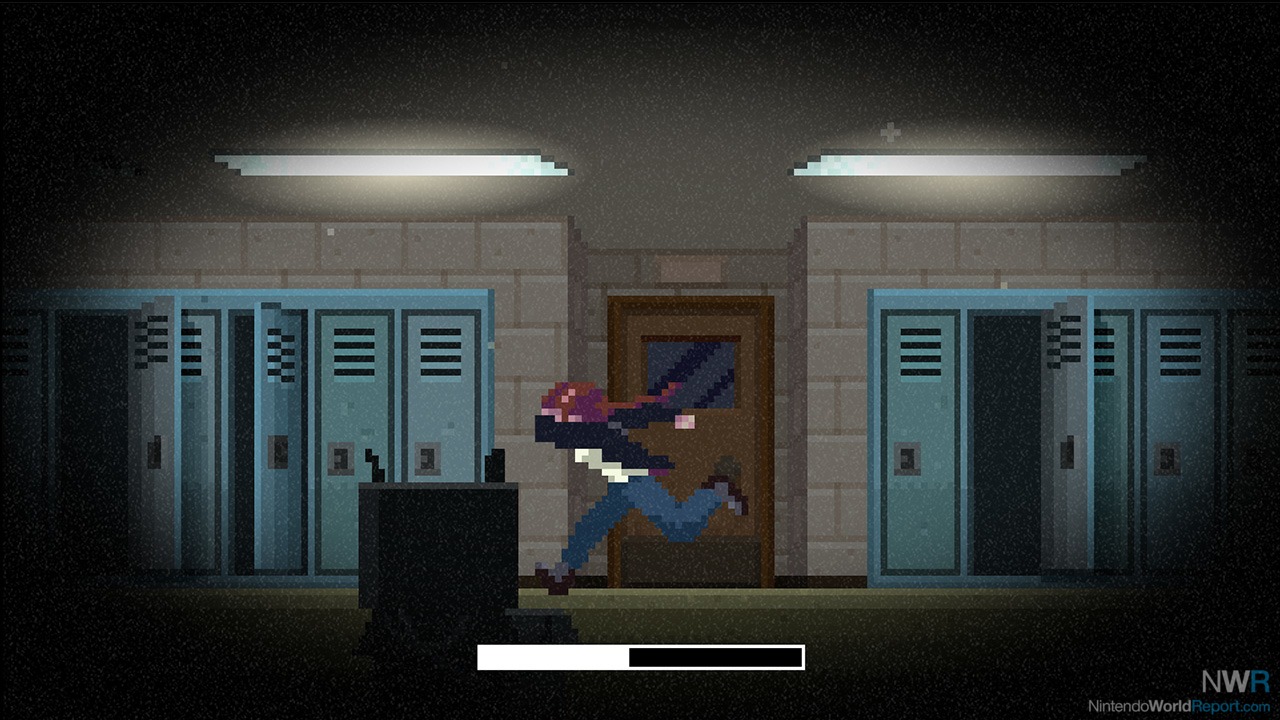 The player takes control of Holly, a young woman driving from her home in the city back to the small country town she grew up in for a high school reunion. She meets up with Flynn, her best friend since childhood, and the two head to the event they’d really rather not be attending. They’re not given the warmest welcome due to a recent tragedy involving the death of Flynn’s fiancée, but things get even worse when Holly discovers a classmate’s dead body and finds the school invaded by horrifying, barely-visible monsters. Holly must find Flynn and figure out a way for both of them to escape their hometown unharmed, all the while wandering into a mystery that will turn the town upside down.

Worse than Death is played entirely on a 2D plane, with Holly’s default speed being a brisk walk and holding ZR allowing her to sprint. There never felt like there were many scenarios where sprinting was actually all that useful, as doing so very quickly drains Holly’s stamina and environments were never big enough that I felt like sprinting would speed the process up all that much anyways. Sprinting anywhere near a monster will immediately draw its attention, leading the mechanic to only be useful in emergency situations that occur very rarely. Pressing A will allow you to interact with things around you, including hiding spots for when a monster is patrolling the area. Monsters will only see you if you are mere inches away from their face, so as long as you’ve crept into a hiding spot at any point before that, you will have no problem avoiding them, leaving very few times when you will have to sprint to survive.

Aesthetically, Worse than Death is very well put together. Characters and environments are displayed in pixel art that’s nice to look at and creates a genuinely spooky atmosphere for you to explore, and the writing paints Holly as one of the rare horror protagonists who isn’t a blithering idiot. This atmosphere is all but disarmed by a few factors, though. Some puzzles are far too abstract and frustrating, with one in particular involving a drainage pump that even after I had given up and looked for the solution online, it still didn’t make any sense how I was possibly supposed to come to the conclusion it wanted me to. There are also a few moments where the game actively discourages exploration. For example, at one point in the hospital chapter I found myself unable to enter any of the other wings for no real reason outside of Holly saying I should check out a different wing first. All of this combined with the fact that the aforementioned monsters are pathetically easy to avoid kneecaps the otherwise okay narrative and mood the game is trying to create.

Other problems exist within Worse than Death, including the fact that it feels fairly obvious that the game was designed for a touch screen first and foremost and therefore playing with a controller at certain points feels unwieldy and overly sensitive. That said, overall the game manages to be an alright experience that likely won’t leave you feeling too strongly either way. The game can be completed in a brisk 2-3 hours, which is just long enough that it doesn’t overstay its welcome and yet just short enough that it feels lacking in certain ways. If you’re desperately looking for a short bit of horror to keep you entertained for at least a couple hours, it’s worth giving a shot, but you likely won’t find an overly memorable experience.