Imitation is the sincerest form of flattery.

If you replaced Jet Kave Adventure’s Cro-Magnon man and his alien jetpack with a gorilla and a monkey, you’d wind up with a pretty good attempt by developer 7Levels to ape the Donkey Kong Country Returns formula. This is an enjoyable romp with some unfortunate design choices that ultimately left me feeling unsatisfied. Part of this may be due to my own negative feelings towards DKCR, but a larger part is that Jet Kave Adventure doesn’t really evolve the formula and plays things extremely safe.

You take on the role of Kave, the former chief of his tribe who’s been banished for reasons that don’t make a lot of sense. He comes across a crashed alien spacecraft and its pilot, who is attempting to repair it but needs an energy source. The alien sees a volcano in the distance and, naturally, believes that liquid-hot magma is the answer to his problems. He jets off into the distance while Kave finds his own jetpack in the wreckage and becomes prehistory’s first flight-capable human. 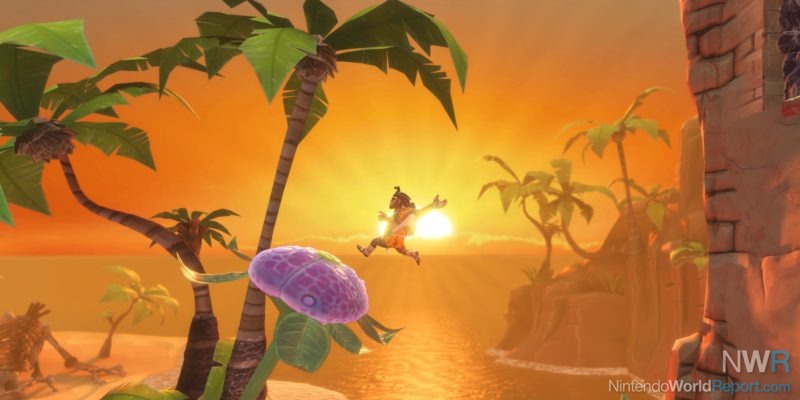 As you might expect, the jetpack’s main function is to extend your jump height and distance, a bit like Diddy Kong’s barrel backpack, although Kave’s jetpack has an extendable, replenishable fuel source that improves on Diddy’s version. However, its secondary function is just as important: by holding down the R button, time briefly slows while you pick a direction to boost Kave in. This ability is put to good use throughout the game, including breaking walls, activating switches, and reaching secret areas. While this isn’t really mentioned, the boost can also be used to pass through certain energy attacks unharmed.

Kave speaks softly and carries a big club, which you can power-up. He quickly obtains a rock sling as well, good for attacking from a distance, and this can also be upgraded. In each stage, Kave can find lots of seashells, which function as currency, and then use them between stages to improve his arsenal. This includes longer clubs, better slings, and more jet fuel. You can also buy more HP and food storage.

Most of the game’s stages are fairly by-the-numbers platforming ventures that are fun, if not particularly challenging. However, this wouldn’t be a DKCR homage without my favorite (read: least favorite) parts from that game: awkward vehicular segments and forced-scrolling chase sequences. The former are broken up into hang-gliding (never fun) and horizontal or vertical jetpack obstacle courses (your mileage may vary). The latter are frustrating because one wrong move and you’re dead and have to restart the sequence. I’m not sure why developers think these are fun. Somebody must like them because they keep turning up in platformers, but my god, enough.

I will say the game looks good, with a cartoony vibe and an interesting mix of prehistoric flora and fauna that try, in equal measure, to ruin Kave’s day. There are dinosaurs present, but I was impressed by the game’s opening disclaimer regarding them.

While Jet Kave Adventure does manage to be enjoyable for the most part, it never really hooked me; the formula rarely changes and the gameplay never evolves. Each of the game’s four levels is divided into nine stages, and by the time I reached stage nine, I was more than ready to move on to something else. Shorter levels with more variety would’ve alleviated this problem. There’s a good game here, but it’s best experienced in short bursts. If you keep hoping that Retro Studios would make a third Donkey Kong Country Returns game, you are probably the target audience for Jet Kave Adventure.