A Hat in Time + Seal the Deal (Switch) Review

A tip of the hat to 3D platformers

It didn’t seem like it was going to happen, but A Hat in Time is now on the Nintendo Switch. The “Cute-as-Heck” 3D platformer swept me away in its creative worlds, never losing my interest, as each new area presented a drastically different environment, complete with unique design quirks. A Hat in Time wear its inspirations proudly, harkening back to 3D platformers from yesteryear, while also maintaining a feeling of modernity. In the roughly 7-hour adventure (15 if you go for everything like I did), I experienced a short journey of familiar fun, with creative twists at every turn.

The story is fairly simple. You don the hat of the adorable Hat Kid, while she is on her way home in her spaceship. While passing a nearby planet, a burly member of the mafia orders her to pay a toll. Hat Kid refuses, and the mafia attacks, which leads to her being swept out of her ship, plummeting to the planet down below. Amidst the chaos, the ship’s fuel source, Time Pieces, are accidentally released and scattered all over the planet. Hat Kid now has to retrieve all of her fuel in order to return home, while making all sorts of friends and enemies along the way. It’s a pretty light tale that serves more as a backdrop for exploration than anything else. The characters actually make up more of the experience than the story, but this works well enough. Each one has a very goofy personality that is unique and charming. You’ll meet a slew of sketchy detective crows, a dastardly ghost that has an obsession with making deals, a feuding pair of movie director birds, and even a girl with a mustache who serves a bit more relevance to the overall plot. And while the setup of the narrative is solid, it ultimately felt forgotten in the wake of constantly exploring the planet below. There comes a point where A Hat in Time pushes the storyline back to the front of the experience, but it feels unearned. The characters and worlds were what made the adventure interesting, not the story of why Hat Kid was there in the first place. 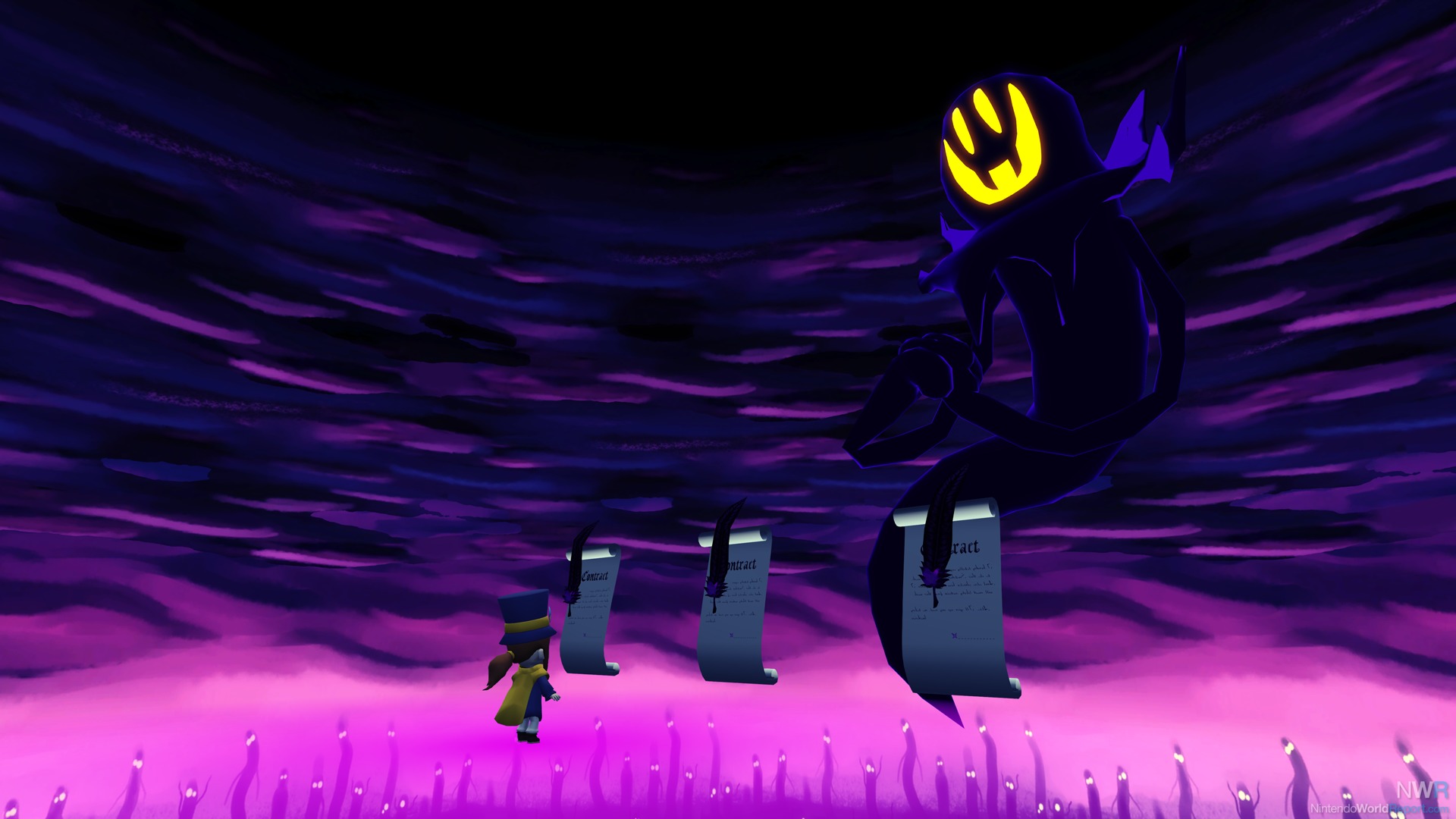 Interestingly, the planet only has four main areas to explore. These areas are called chapters, and each level in a chapter is called an act. Usually, each chapter has about six acts, with three bonus levels called Time Rifts, and for the most part, these acts are all very different from one another. Most of the worlds drop Hat Kid off in a large, open environment that she is mostly free to explore, with the constraints being tied to that act’s objective. Completing an objective will net Hat Kid a Time Piece, which she needs to complete the journey. The only chapter that doesn’t exactly follow this pattern is Dead Bird Studio, which takes a different approach in creating much smaller areas for Hat Kid to explore both freely and linearly. It’s very refreshing and definitely feels like it has a particular design around every task at hand. There is an abundance of random things to do that don’t always tie-in with the act’s objective. That said, these areas are all fairly large, and it is easy to get lost in them; it wasn’t hard to remember the overall layout, but I never felt like I had really found everything in an area, despite having combed them thoroughly. The lack of a map meant that I found myself going in circles, or trying desperately to return to an area where I had seen something I wanted to get to but couldn’t at the time. 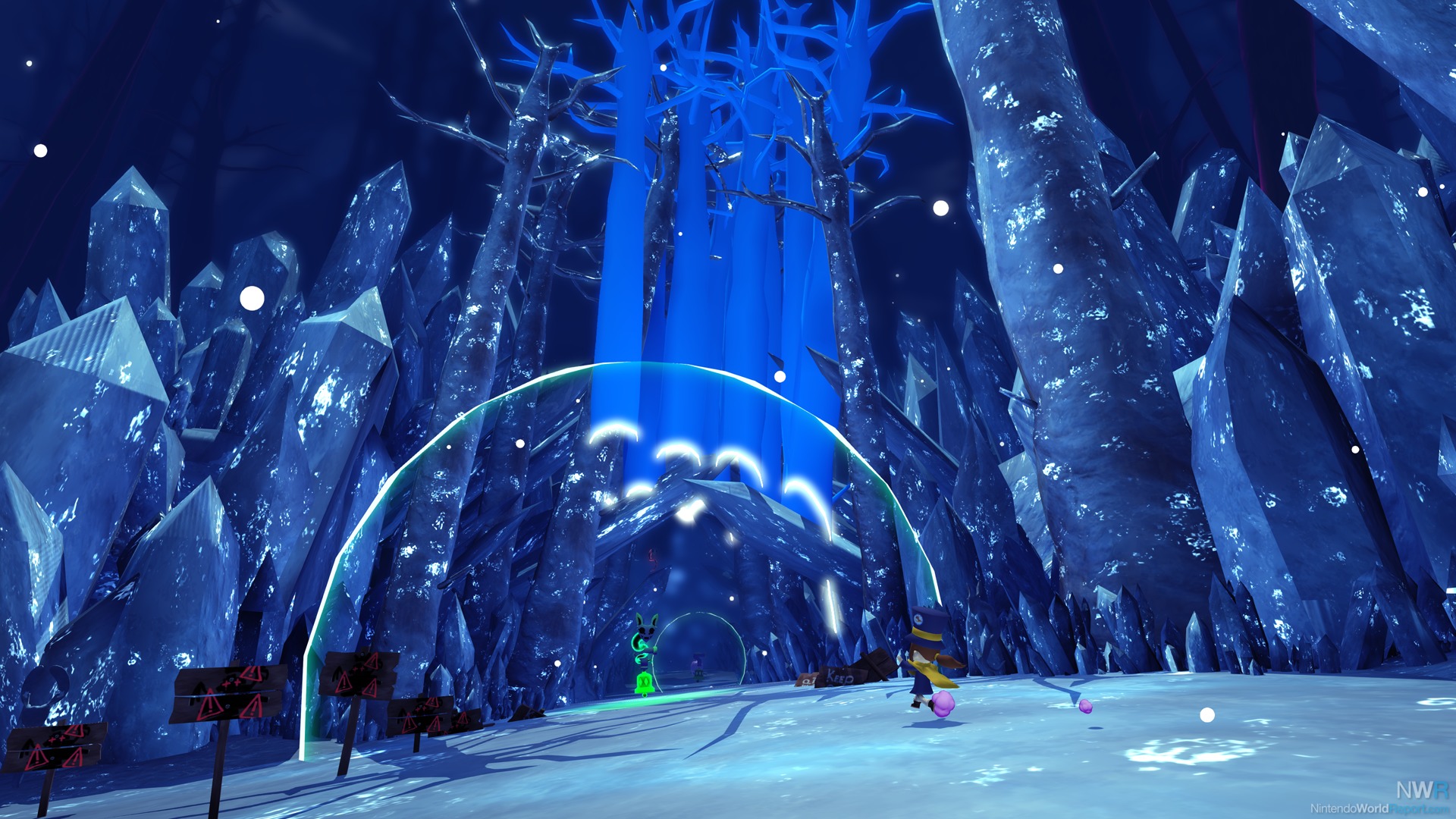 There are several upgrades that can be purchased that advance Hat Kid’s moveset, rather than having them available from the start. I found that some of these upgrades would have been better suited to being tied to Hat Kid’s moveset, such as having the ability to dash into a wall and climb up it, rather than giving up an ability slot. You can only have up to three abilities equipped at a time. That said, the controls are pretty tight. Hat Kid can double jump, dash, scamper up a wall, and attack with an umbrella, among other things. It’s standard 3D platformer fare but serviceable and felt good to play. The real hurdle is the camera. Many areas have narrow paths, alleys, and small concaves that make navigating a platforming section tedious and, at times, sickening from the camera jumping all over the place. This is less of a problem in the game’s levels that are exclusively meant for platforming and shined as some of the most enjoyable areas to test out the full scope of the moveset. These areas, called Time Rifts, are pure 3D platforming challenges, with some set in the themes of the chapters they are found in, which actually serve to give some much-welcomed backstory to the oddball characters of that chapter. You can find these tidbits of information by collecting scraps of pages in the Time Rifts. There aren’t that many other collectibles to find: the necessary Time Pieces that are your end goal, gems used as currency for abilities, tokens for a slot machine that yields an array of goodies, relics that are used to unlock the Time Rift levels, and balls of yarn used for creating new hats.

Your hat plays more of a role in the gameplay than you’d expect. Different hats do different things; for example, the witch hat lets you throw explosive potions and the winged visor lets you run faster. You can easily change the hat you’re wearing, and these supplement the abilities you buy throughout your adventure. I never felt like the hats were that unique, and they came across more as a cosmetic with an ability attached than something different compared to the abilities. That said, they provided a very enjoyable level of customization, as each hat type has variants with the same ability. This really added to the uniqueness and fun that could be had with Hat Kid, and really the world as a whole. 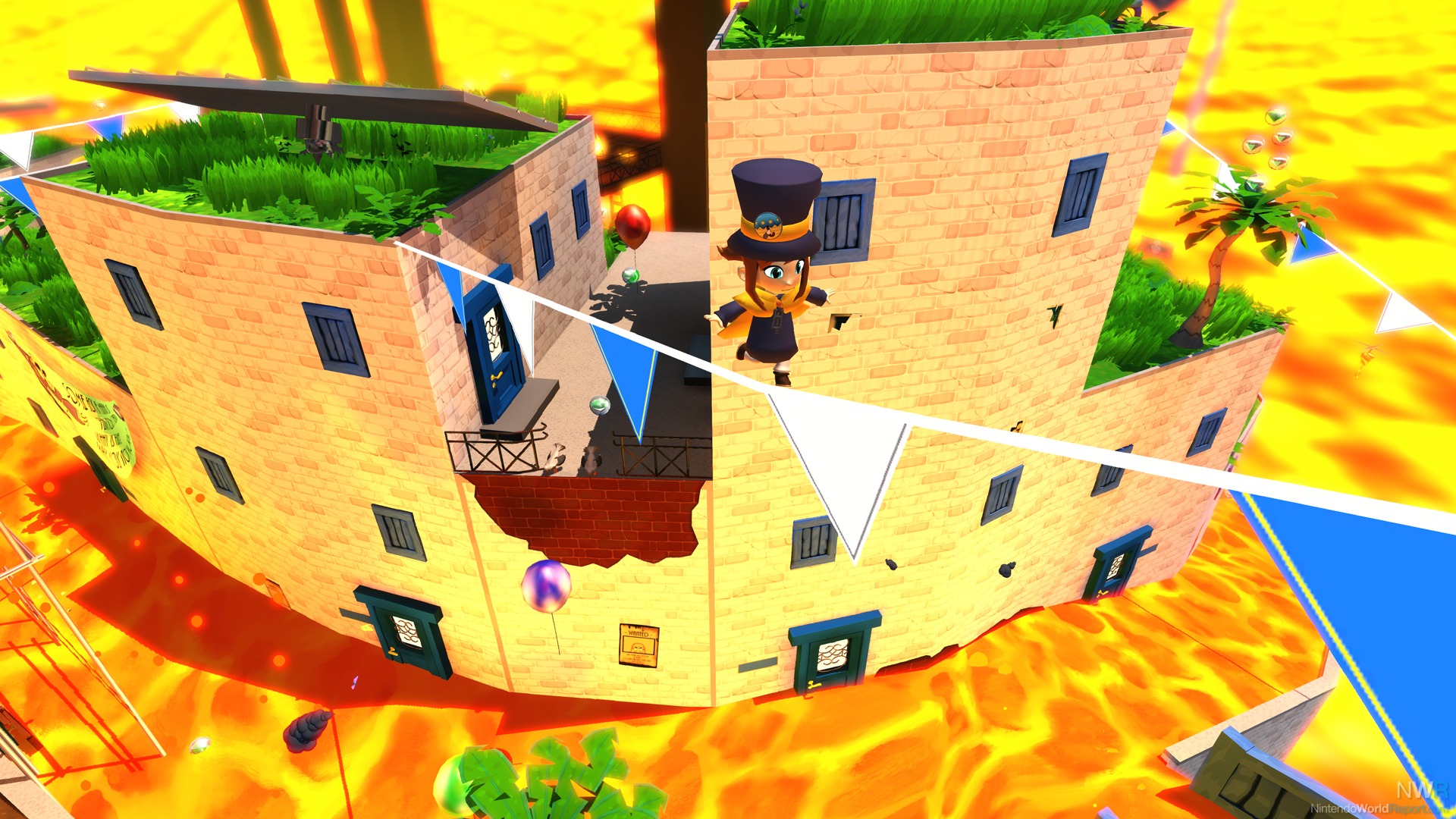 A Hat in Time is dripping with style and whimsical characters. The art direction explores a variety of visuals, from an eerie forest that both encapsulates the cheesy side of Halloween and the terrors of a survival horror game. Even the Hub World, which in itself is lacking in terms of things to do, has its own aesthetic that both matches the rest of the game but looks very much like its own area. The music, too, echoes the imagination of what can be seen. There are many tracks that use the diversity of the worlds, and the well-done voice acting, to compliment the art style.

The biggest knock on the base game is its performance on Switch. Load times aren’t terrible, but also not great, pushing 20 seconds at times. The frame rate is very inconsistent, jumping around about as much as the camera. In some levels, like one with a parade that houses a lot of things going on, you will see incredible slow down. Others, like the Time Rift sections, are much more bearable. A Hat in Time is an easy game that gets its difficulty from the frequent stutters. It was very common to see the game freeze for a few seconds during gameplay, making me think it had crashed. This was increasingly annoying in boss fights, timed challenges, or trickier platforming sections. But it’s consistent: there are areas where it seems to run fine. So if you’re looking for the best experience playing A Hat in Time, I have a hard time recommending the Switch port. It just seems like a better version is on a different platform. Adding to that, while co-op was a really welcome addition given it’s a single-player title (the second player can control a separate character named Bow Girl), it makes the performance and the camera even worse. Co-op isn’t split screen, and the camera gives priority to Hat Kid while Bow Girl has to keep up. Bow Girl makes some challenges pretty easy, in an already easy game, but the option is still nice to have. 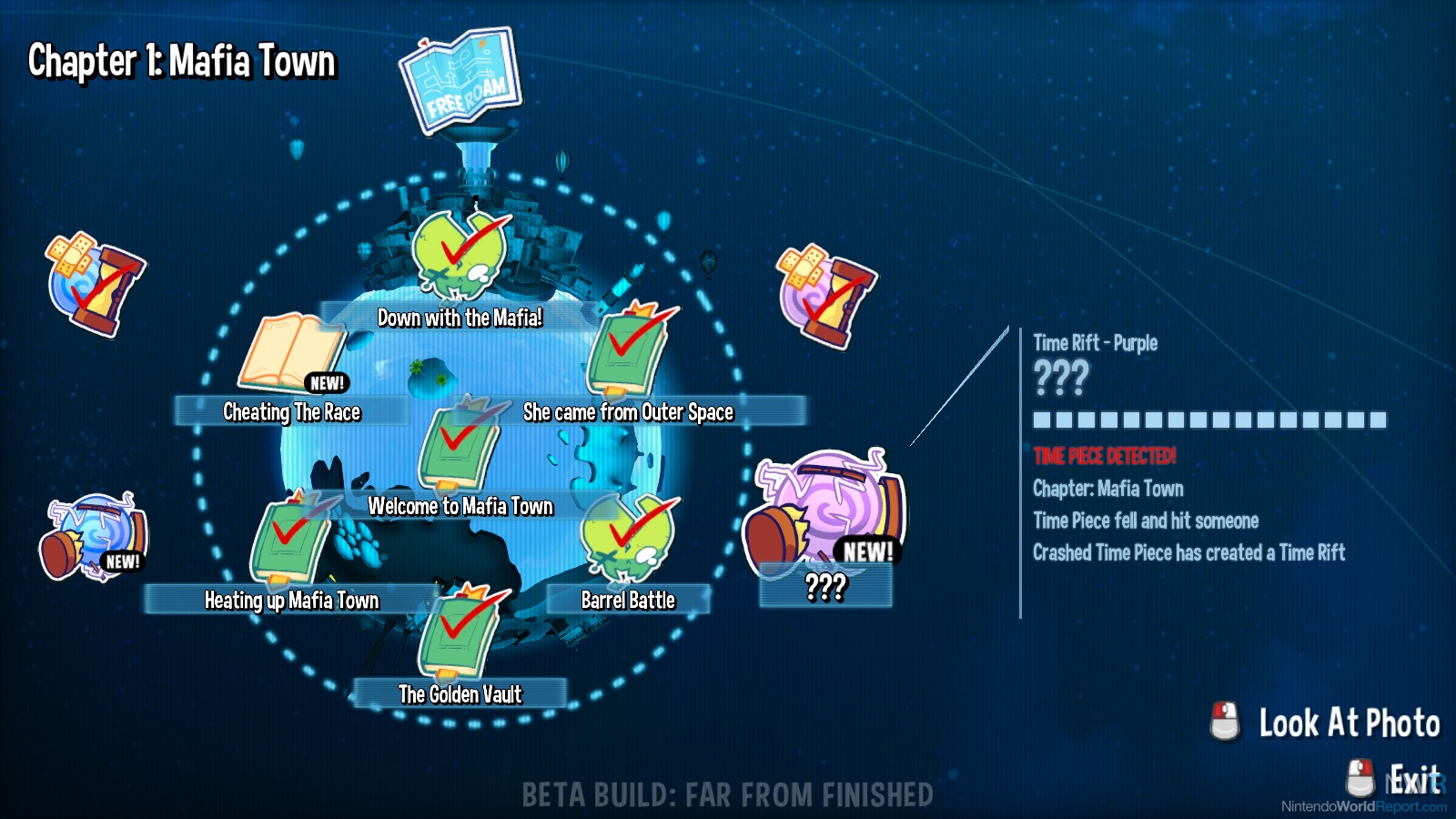 After having collected all 40 Time Pieces, seeing the credits, and being a little disappointed that my core journey was over, I was left wondering what else was in store, like the included DLC: Seal the Deal. This is where A Hat in Time fell apart for me. There are two parts to Seal the Deal, a new chapter with three acts (as opposed to the usual six), and a section where you replay levels from the core game but with a twist that adds a higher difficulty. The new chapter, set on a cruise ship in the arctic, has a really neat environment to explore. But it is one of the most cramped spaces to navigate, which compounds the camera issues. One of the three acts has Hat Kid trying to complete random tasks in a set amount of time. Multiple tasks are always available, and to understand where to head next, arrows lead Hat Kid through the cruise ship. This was not a pleasant experience, and it may be one of the most frustrating 3D levels I have played. The navigation doesn’t choose one task to point you towards as it frequently flips to other tasks. Every task has a timer on it, and even if the timer hasn’t expired, the navigation of where to go keeps flipping around. Couple this with a bad camera and you’re in for a terrible time. And that isn’t even meant to be the hard part of the DLC. The “Death Wish” portion tasks Hat Kid with completing an array of objectives in different levels from the base game. The increased difficulty is appreciated as the base game is pretty simple, but more often than not it felt unfair. After several failed attempts, you’ll get a smug screen prompting you to pay up to take an easier option, when it often didn’t feel like my fault for failing, which I would attribute more to the poor performance. This DLC was the biggest disappointment to a title that I was interested in playing more of. 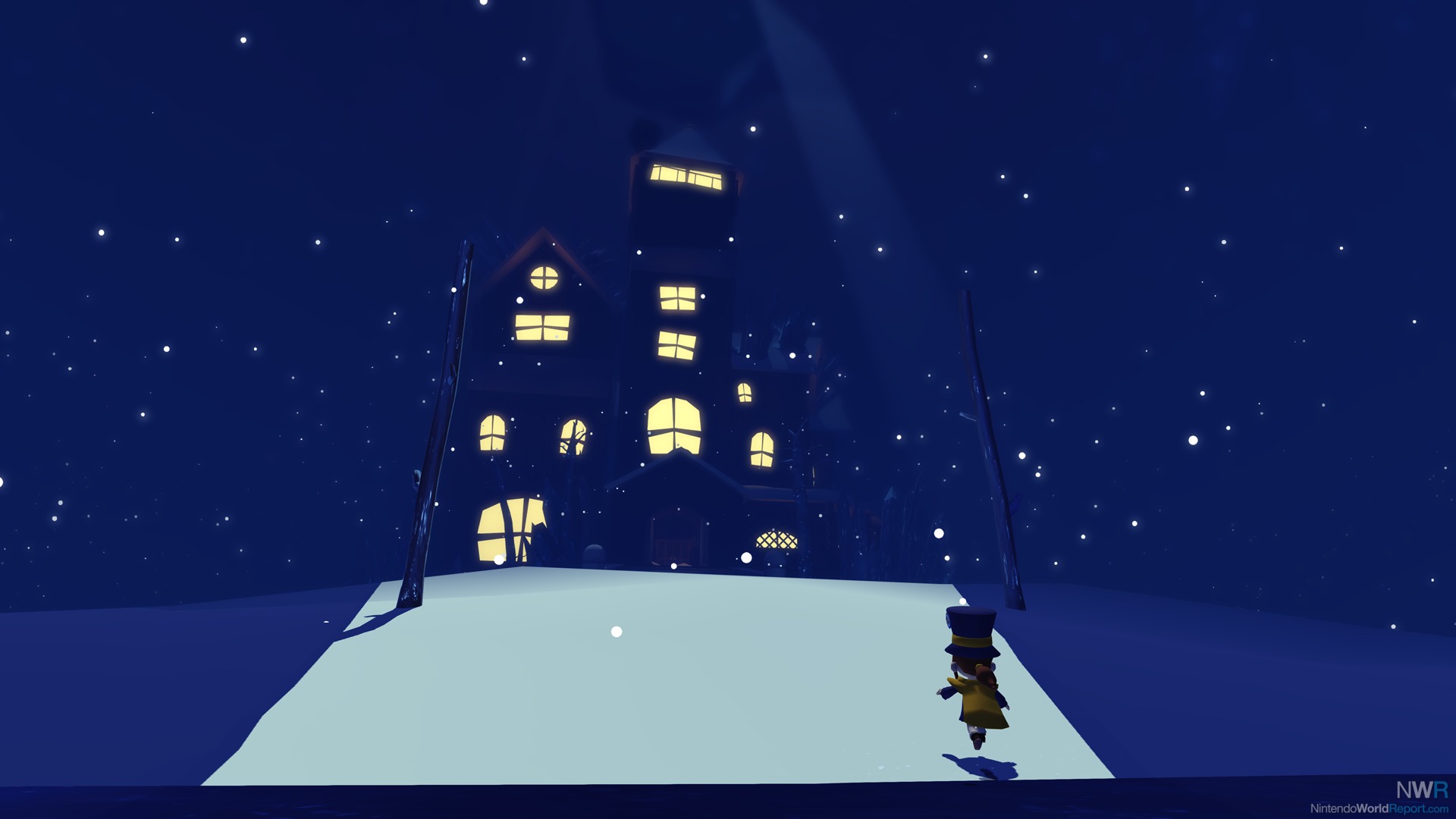 All of this to say, A Hat in Time + Seal the Deal knows what kind of game it is, and it certainly pays homage to titles that built the genre. It has its own cute, quirky personality but it definitely trips over itself, despite a valiant effort to be a great 3D platforming experience. It just needs to run better, and iron out its rougher spots so that it can throw its own hat into the ring of the best 3D platformers.