When you’re done with this, I’ve got a series of books I need you to read.

In the early days of the Switch, as impossible port after impossible port hit the system, I distinctly remember wondering if it would ever be possible for The Witcher 3: Wild Hunt to run on the little system that could. This came to mind specifically as I played through The Legend of Zelda: Breath of the Wild, which drew regular comparisons to Witcher 3. These thoughts rose up again as I replayed The Elder Scrolls V: Skyrim on Switch as it in many ways felt like the predecessor of Witcher 3’s design. However, these thoughts usually ended with an undeniable realization that Witcher 3 is one of the most technically demanding games available on eighth generation platforms. I initially played through it and its various DLC on Xbox One, where I’d regularly experience hiccups in frame rate below the target of 30 frames per second. At launch, the Xbox One also couldn’t run it at its native 1080p and opted instead for 900p. In other words, Witcher 3 is an incredibly demanding game that drags much more powerful systems to their knees for only 30 frames per second and below native resolution. It is a game that redefined the western RPG, and kept me locked to my Xbox One for the better part of a year. But most importantly, and most unexpectedly, it is a game that I am now playing on a handheld. Witcher 3 on Switch represents two things. Firstly, what it has always represented: it is the best western RPG of this generation and perhaps of all time. Secondly, it is the most ambitious port the Switch has ever received.

The Witcher 3: Wild Hunt is an open-world action RPG. Its setting and characters are based on the work of Andrzej Sapkowski. It builds off of the lore of both Sapkowski’s books and two prior, more linear, adventure style games. While a working knowledge of the extensive lore is by no means necessary, Sapkowski’s books are excellent, and I strongly recommend them. You play as Geralt of Rivia, who is a Witcher. Witchers are biologically augmented monster slayers for hire. Geralt is made aware of the return of his long lost ward, Ciri, who he had rescued as a child from the war torn kingdom of Cintra after they were invaded by Nilfgaard, with an army lead by Ciri’s father, Emhyr var Emreis. Geralt is hired by Emhyr to find Ciri, who Geralt sees as his own adoptive daughter. Ciri’s destiny, however, is far more complex, and Geralt inevitably finds himself mixed up in an apocalyptic prophecy with Ciri at its center. The lore can be dense, but Witcher 3 does a great job of providing enough information for new players to understand what’s going on. That being said, fans of the books will spot plenty of characters from, and referential nods to, Geralt’s past adventures. 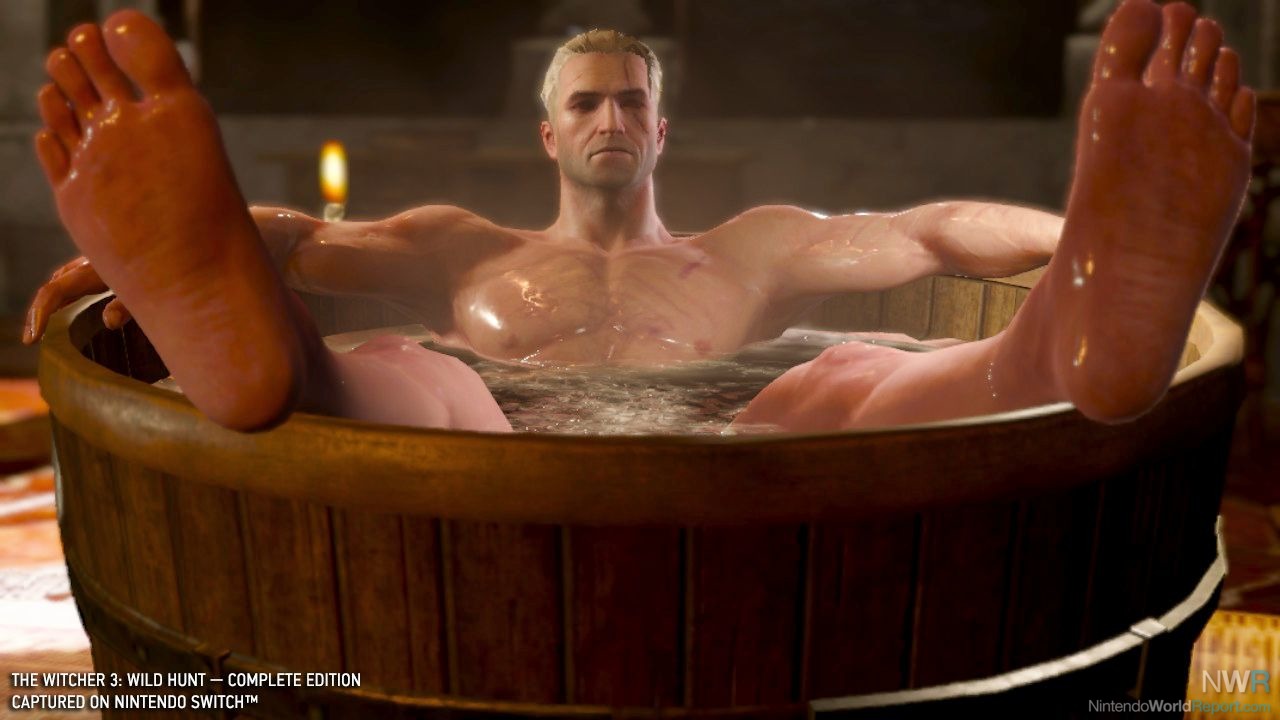 The basic gameplay loop of Witcher 3 is similar to other open-world RPGs on a basic level. You’ll pick up quests from characters, notice boards, or simply by stumbling into them. While your primary quest plays out a bit like a detective story as you track Ciri, other quests range from monster hunting to leading a goat back to its owner. What sets the Witcher game series as a whole apart from other RPGs is the excellent character writing and branching dialogue trees. From the overarching and epic primary questline to the smallest sidequest, every character is fully fleshed out with multiple outcomes depending on your actions. There are multiple endings available based on the results of primary quests, but the world in which those endings take place can be greatly affected by the smallest decision made in what would seem like an arbitrary side quest. My first time playing through Witcher 3, I quickly played through a seemingly minor side quest only to find at the end of the game that a major political shift had occurred thanks in part to those hasty decisions.

Regardless of your choices, you’ll often find yourself in combat scenarios. Witcher 3’s combat is fast-paced and remarkably accurate to Sapkowski’s writing. Geralt’s style of fighting relies on quick pirouettes and counters. You’ll rarely overpower your foes, but rather you’ll win through speed and quick thinking. Geralt has two swords: one of steel for fighting humans and another of silver for dealing with monsters. Both of these swords can be upgraded and replaced independently. Geralt’s moveset consists of fast and strong attacks along with dodges, rolls, blocks, and counters. On top of this, Geralt can also use a sort of basic magic called signs. For example, Igni can be used to shoot out a wave of flames to hit multiple enemies in combat along with being useful for lighting torches. Meanwhile, Ard can be used to confuse enemies you’re fighting or influence the minds of people you’re talking to. Various oils and potions can also be used to augment Geralt’s abilities. I should note, though, that these systems are largely optional, and it is up to the player to decide what to focus on. My first time through the game, I made almost no use of the crafting system, but digging into it added more variety to my second playthrough. As you complete quests you’ll earn experience and level up. Geralt has various skill trees that can be upgraded and unlockable abilities that can be equipped. Depending on how skill points are used, two players can wind up with very different playstyles. For my Switch playthrough, I focused on improving my health and healing abilities at the outset which has helped me survive a few encounters where I was underleveled. 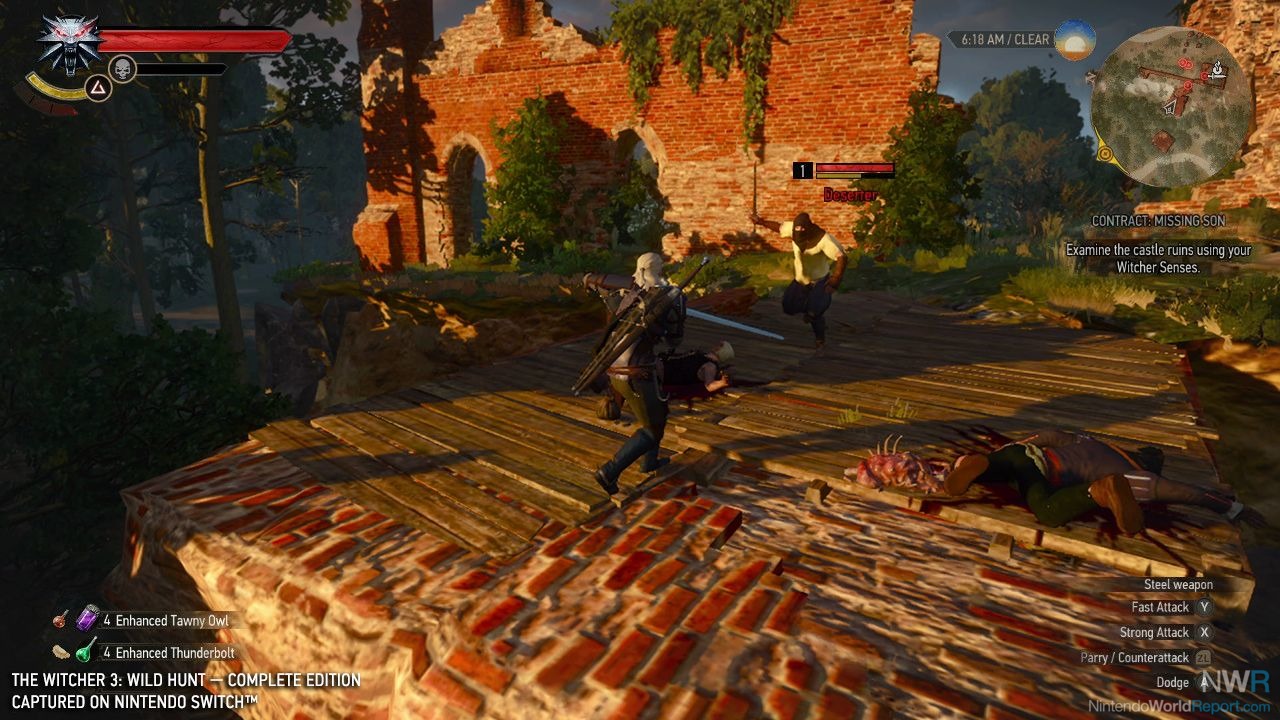 From a design standpoint, Witcher 3 is a nearly flawless game. The one area that does hold the experience back for me are a few elements of the map design. The world itself is beautiful, and this largely holds true on Switch. The vast array of vibrant colors that fill the screen as the sun rises in the morning is unlike anything I’ve seen in other games. The idyllic hills of Toussaint contrast brilliantly with the humid, muddy wastes of Crookback Bog, yet each area carries with it a wonderful degree of detail and character. In terms of gameplay, however, I do find the layouts of Witcher 3’s maps to be somewhat cluttered and compact. You’ll rarely find an open space to truly experience the vastness of the world, but rather you’ll be constantly surrounded by trees, cliffs, rivers, and buildings. The sense of scale in Witcher 3 can feel slightly off in the overworld between large cities. It is a complaint that I fully accept many will not feel is valid, but for myself, I like the more spread out worlds of Skyrim, Breath of the Wild, or Xenoblade Chronicles X. My other complaint, and one that is a bit less debatable, is the in-game route finding system. Assuming your active quest has a specific location attached to it, your compass will not only point you towards it, but will theoretically provide you a path to get there. This path will stick you to roads, until it randomly decides you should vear of into the woods. It will regularly get tripped up when you need to cross a body of water and double back on itself not sure of how to get you across. It was a problem I always hoped would be patched in the initial release, and I’m disappointed to find that it is still present in the Switch port.

That brings us to this port in particular. Witcher 3 on Switch targets 540p handheld and 720p docked, though both of these can adjust dynamically based on load. That 720p docked is a fascinating note as it isn’t far off from the launch resolution of the Xbox One version at 900p. For reference that is the resolution difference between The Legend of Zelda: Breath of the Wild on Wii U as compared to Switch. Of course, that’s not to say the image quality is fantastic, merely that it is closer to the other platforms than it perhaps has any right to be. The reality is that when played on a modern 4K TV, Witcher 3 on Switch is going to look a little muddy. It is comparable to Panic Button’s work on the Doom and Wolfenstein franchises. I do still feel that the excellent artistic design manages to shine through and the gameplay by no means suffers from the resolution drop, but it is certainly blatant. The handheld setup on the other hand, despite being lower resolution overall, didn’t feel like as significant a cutback. The smaller screen size does wonders to hide drops in texture detail and level of detail pop in. Both configurations run at 30 frames per second, the same frame rate as the base console versions on Xbox One and Playstation 4. During gameplay this holds up remarkably well, and I only noticed a few areas where combat caused a noticeable dip. Even then, it's arguably similar to the dips present in version on other consoles. Where the frame rate really runs into trouble is during some particularly busy cutscenes. Here, I’d occasionally see frame rates dip into what appeared to be the single digits. In rare instances, I’d also see a short loading screen between shots. While of course none of this affects gameplay as it’s only present in cutscenes, it does affect the presentation of the story. My only other issue with the Switch port is one of gamma settings. By default the game is extremely dark, and I found that I had to turn the gamma settings nearly all the way up to get it to a comfortable level. Unlike some of the other minor issues, this one seems easy to patch so hopefully a fix will be available soon. 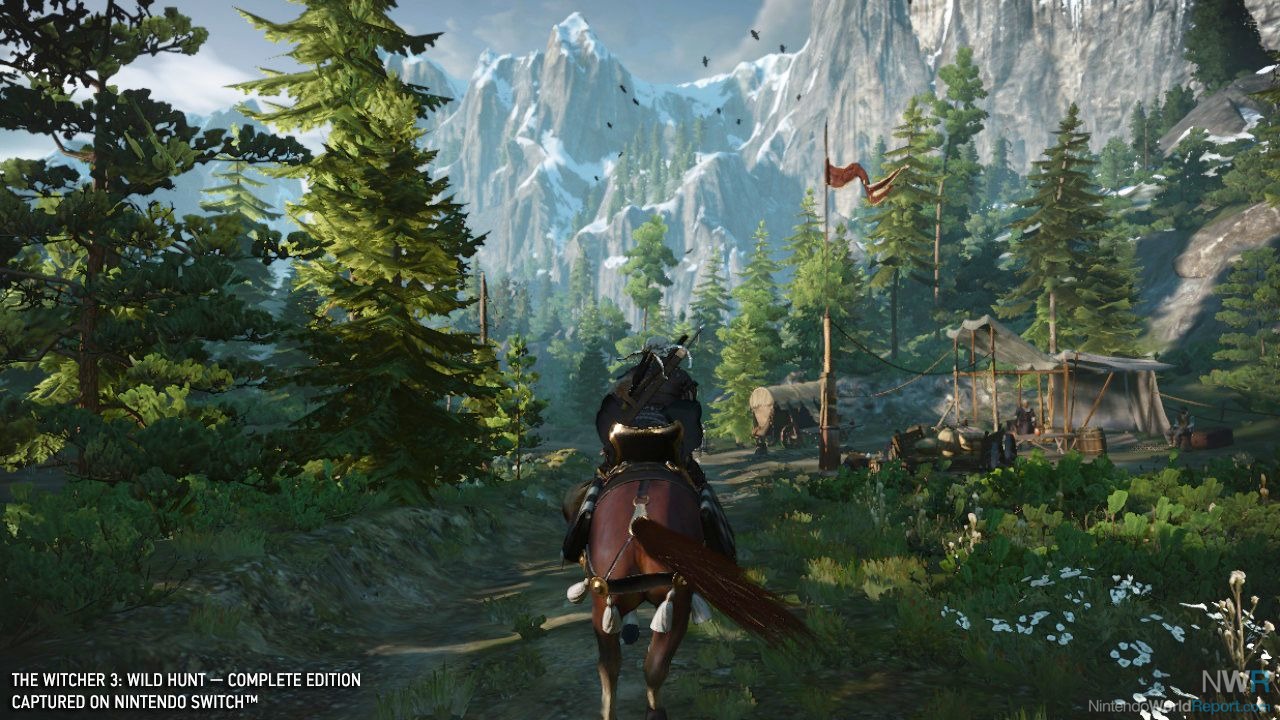 The Witcher 3: Wild Hunt is every bit the amazing game on Switch that it is everywhere else. While the Switch version does of course make compromises, the core vision and game design shine through, assuming you have the brightness turned up. While it is unfortunate that the route finding system is just as bad now as it was at launch, it is ultimately a tiny chip in an otherwise remarkable masterpiece. Whether Witcher 3 will be your entry point into the larger Witcher universe or you’re a longtime fan, I cannot recommend it enough. It is a game that to some extent transcends its genre and one that everyone should play. Witcher 3 is not only one of the most impressive of the impossible ports on Switch, it is one of the best games on Switch, and perhaps the finest western RPG of all time.