Super Kirby Clash Simplifies Kirby More, But Maybe Not for the Best

The four-player boss battle game is a free-to-start Switch game that carries Kirby charm but less complexity in an already decidedly uncomplicated series.

Super Kirby Clash launched the same day as the Nintendo Direct in early September and with so many games out on the Switch this month, I wouldn’t fault you if you forgot about it. It also doesn’t help that even if it looks nice and has some warm Kirby charm, Super Kirby Clash just merely exists. If Nintendo and HAL Laboratory ever made a Kirby mobile game, using this game as the basis would probably make sense. 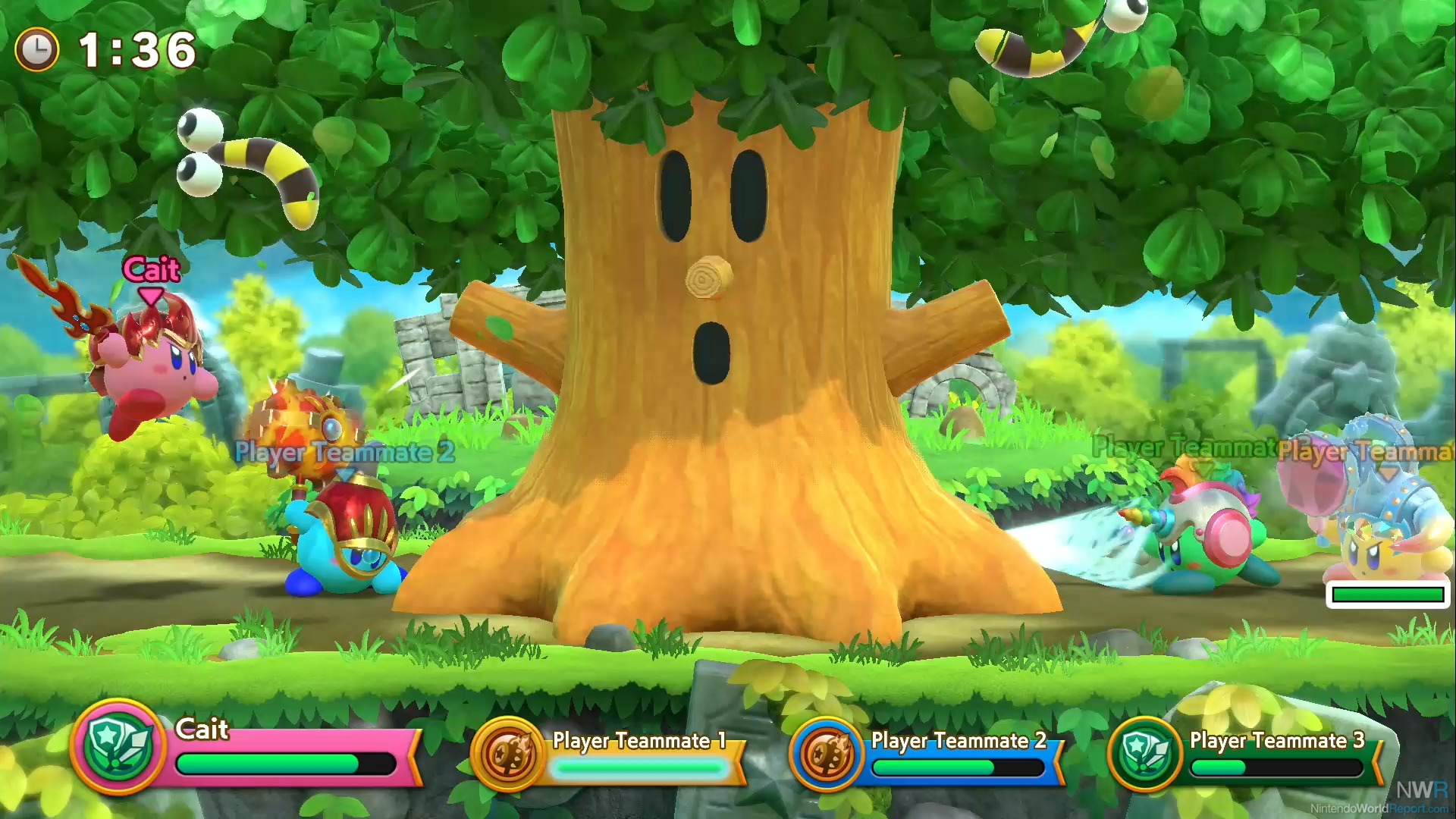 That’s most apparent in the fact that this is a “free-to-start” game on Switch, and you can get relatively far and deep in this game without needing to spend a dime. Sure, you can quicken the difficulty curve and burn through the quests more quickly by spending real money, but even with monetization being ever present, it settles into the typical Nintendo free-to-play mentality of not being inherently necessary for progress.

But the idea of this tying to Nintendo’s mobile present is in the fact that Super Kirby Clash takes elements of Kirby and distills them into a form that while still roughly enjoyable, lacks the charm and verve of mainline Kirby games like Switch’s Star Allies or even other spin-offs. Basic gameplay involves taking one of four classes (all based on copy abilities) and fighting bosses. It’s a little spam-happy with attacks, though later bosses up the ante and require a tiny bit more strategy, especially if you don’t adequately level up and upgrade your character’s weaponry. Particularly with a full team of four players—which can be filled in by CPU-controlled allies, local friends, or online players—most bosses can be felled by standing near the baddie and viciously attacking while periodically hanging back to heal. Heck, one of the classes, the aptly named Dr. Healmore, can just heal the melee attackers with ranged potions. In addition to the healing physician, the other classes are Sword Hero (focused on nimble sword attacks), Hammer Lord (slower-paced but more powerful hammer wielder), and Beam Mage (ranged magic user). They’re all varied and each one can level up to improve their skills, as well as get boosts from weapons and armor purchased in game. Naturally, you can, if you’re so inclined, spend real money to speed up this process, but the difficulty curve is relatively gentle and doesn’t really demand the cost. 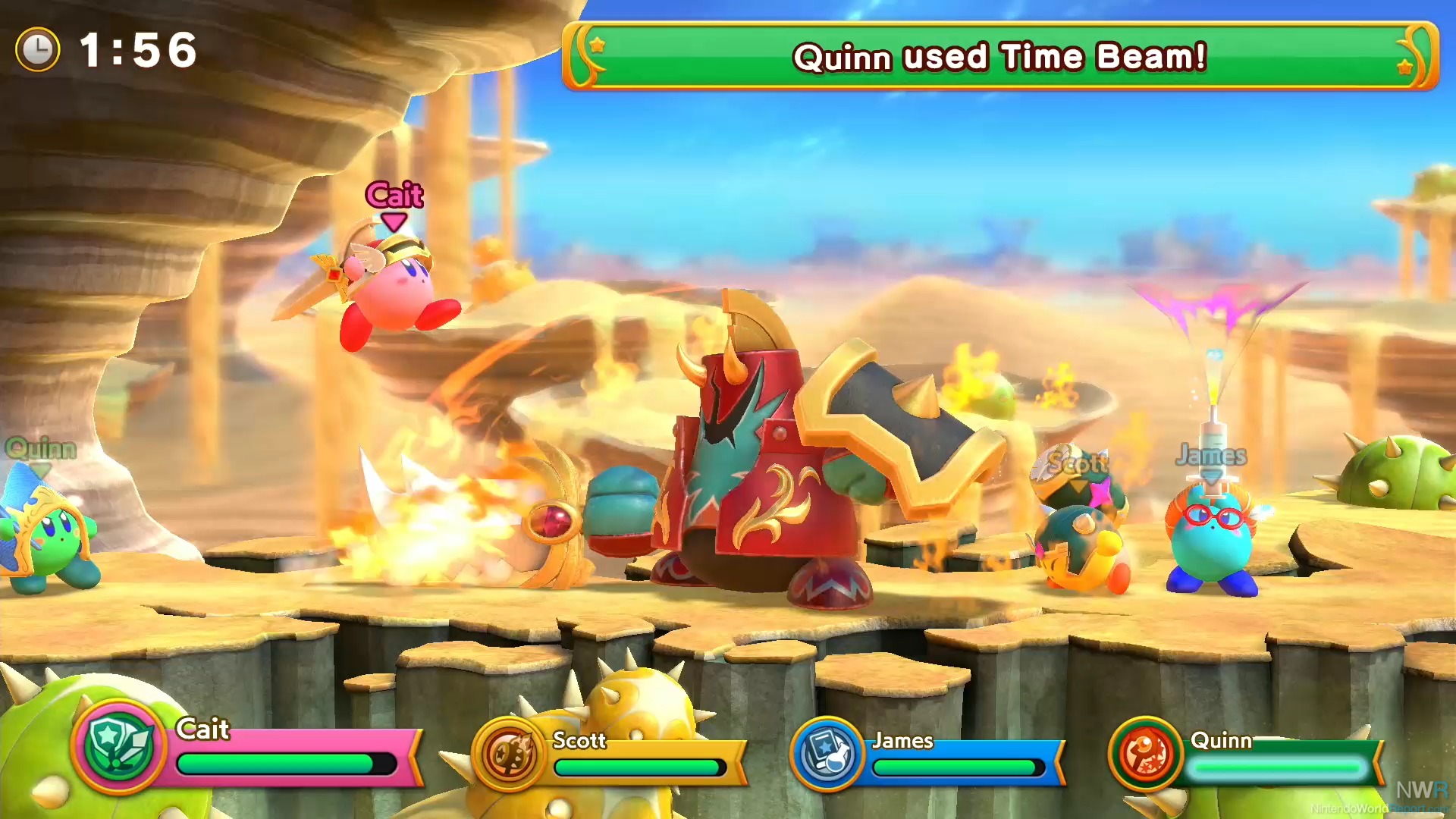 Super Kirby Clash is weirdly deep and long, filled with a lot of Kirby series references in characters and bosses. I predominantly played locally, which was enjoyable with friends and repetitive by myself, though online is encouraged as you get an experience boost.

Ultimately, my recommendation for anyone interested in Super Kirby Clash is to just go play Kirby: Star Allies. It’s not the best Kirby game but it’s really fun and a fine entry in the series. However, if you have kids, Super Kirby Clash is a fun little jaunt. I can speak from a little bit of experience that while the various nieces and nephews in my life seem to dig Kirby in general, the spam-happy, single-screen nature of Super Kirby Clash made it a lot more digestible for new gamers than the more lighthearted platforming and puzzling of Star Allies. Not that Star Allies is some kind of labyrinthian nightmare, but it’s also a game that costs money to play, whereas you can see if your kids like them some Kirby on the cheap and/or free with Super Kirby Clash. 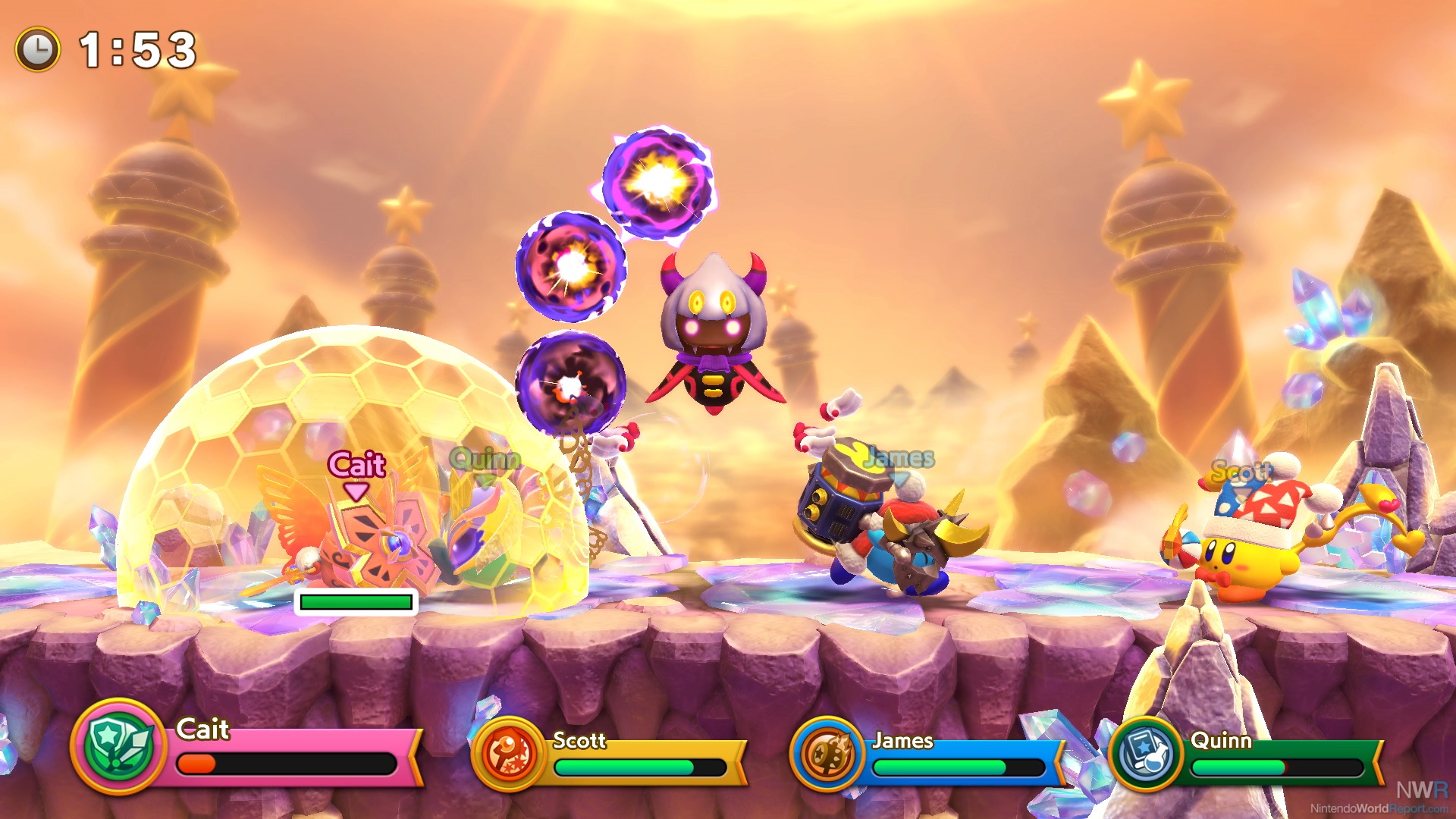 In general, Super Kirby Clash makes me wistful for the era of more interesting spin-offs in the series. On 3DS, we saw mini-games from Kirby: Triple Deluxe and Kirby: Planet Robobot get turned into their own eShop games. Triple Deluxe gave us the clever rhythm game Dedede’s Drum Dash Deluxe and Smash Bros-esque Kirby Fighters Deluxe, while Robobot led to the weird 3D action game Kirby’s Blowout Blast and Team Kirby Clash Deluxe (the predecessor to Super Kirby Clash). Kirby Clash is probably the least enjoyable of that quartet, but also the only free-to-play one. Not that every other Kirby spin-off over the years has been aces, but the series has lent itself to fun diversions, whether it’s the fuller Kirby Canvas Curse/Rainbow Curse duology, the unique and well-aged Kirby Air Ride, or the likes of Kirby’s Block Ball and Kirby’s Star Stacker, more interesting spin-offs have come the series’ way in the past.

For as solid as Star Allies is, it’s lacking in the clever potential spin-off side modes. The two major ones are Chop Champs, a tree-chopping multiplayer game, and Star Slam Heroes, a baseball bat meteor-smashing multiplayer game. It made me long for the enjoyable insanity on display in the DS game Kirby Mass Attack’s side modes, which featured a simplistic RPG, a brief pinball table, and a touch screen shoot-’em-up. It’s a shame none of those got more love.

At the end of the day, I begrudgingly accept why Super Kirby Clash is on Switch. Free-to-start games provide low barrier of entry and hey, the online focus encourages people to subscribe to Nintendo Switch Online. The overall direction of the Kirby series doesn’t seem to be a poor one; it’s just a modern turn for a franchise that has had many facelifts and vagabond years. I’ll be curious to see what HAL Laboratory does with their next Kirby game while I cross my fingers for another Picross 3D entry somehow.

I feel like I have to close this by mentioning the vocal-heavy credits song for Super Kirby Clash that is equal parts adorable and ridiculous. It feels like something a lot of people will miss, so here it is for you to listen to. And remember: “Raise up the spirit of your soul; Paint the starry sky with dreams and grow.”