Bumpy but fun when the rubber hits the road.

Dodgeball evokes in me a more team-based competition, something akin to the NES Super Dodgeball. In the case of Super Dodgeball Beats, they use the grade school survival of the fittest competition as a loose framework to center its core gameplay around, a music rhythm competition. As a team of four, you’ll engage in roughly two-minute rounds of button-pressing competitions versus a CPU team, rising the ranks with each victory in order to become champion. 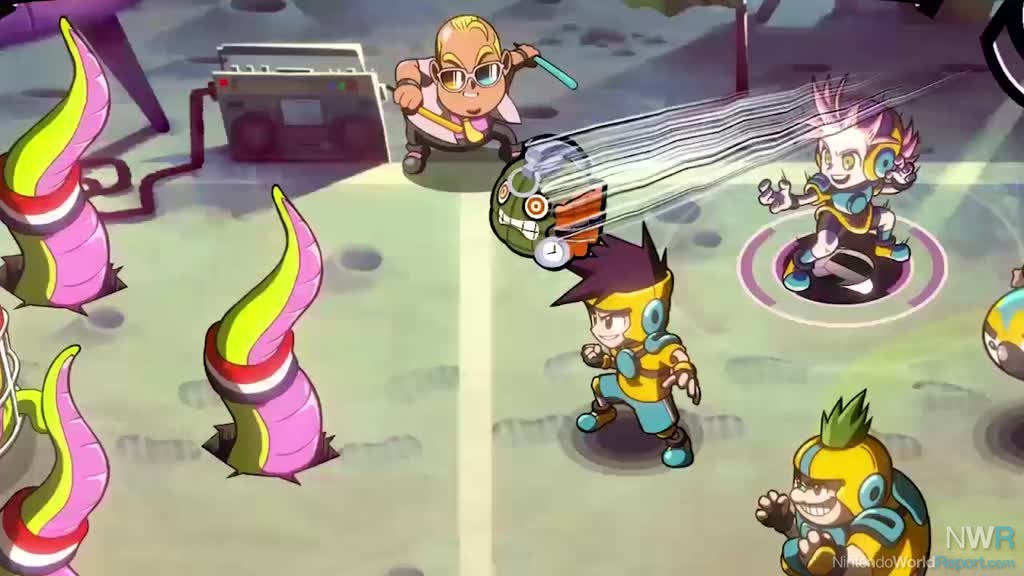 Gameplay is simple – each team member is assigned a face button. As the music plays, rings will circle teammates, gradually narrowing in until the corresponding button needs to be pressed, including variants of having to hold down the button until a meter fills then releasing at the right moment or sliding the circle from one teammate to the next before pressing the button. Successive successful button presses unlock power-ups which you and the opponent can use to trip each other up. While this is all happening, an opposing team or beast is on the opposite side of the field, attempting to hit those same beats. This is in service of a meter at the top, acting as a scale to show whether you or the opponent is hitting more beats as the match progresses. When the song concludes, whomever did the best is the victor.

Winning relies on managing the chaos while also keeping a keen eye on the beats you need to hit. You’ll be in a rhythm of hitting all the timing right, then look out the corner of your eye to see once you’ve obtained a power-up to unleash on the opponent, while also navigating ones received by them. These power ups largely focus on obscuring your vision, making it more difficult to keep up with the persistent beats as they flow down to your team. I say this as a warning: if those kinds of obstacles frustrate you easily, then Super Dodgeball Beats may not be for you. I found them challenging but workable as you then basically have to time in your head rather by eye when to button press. 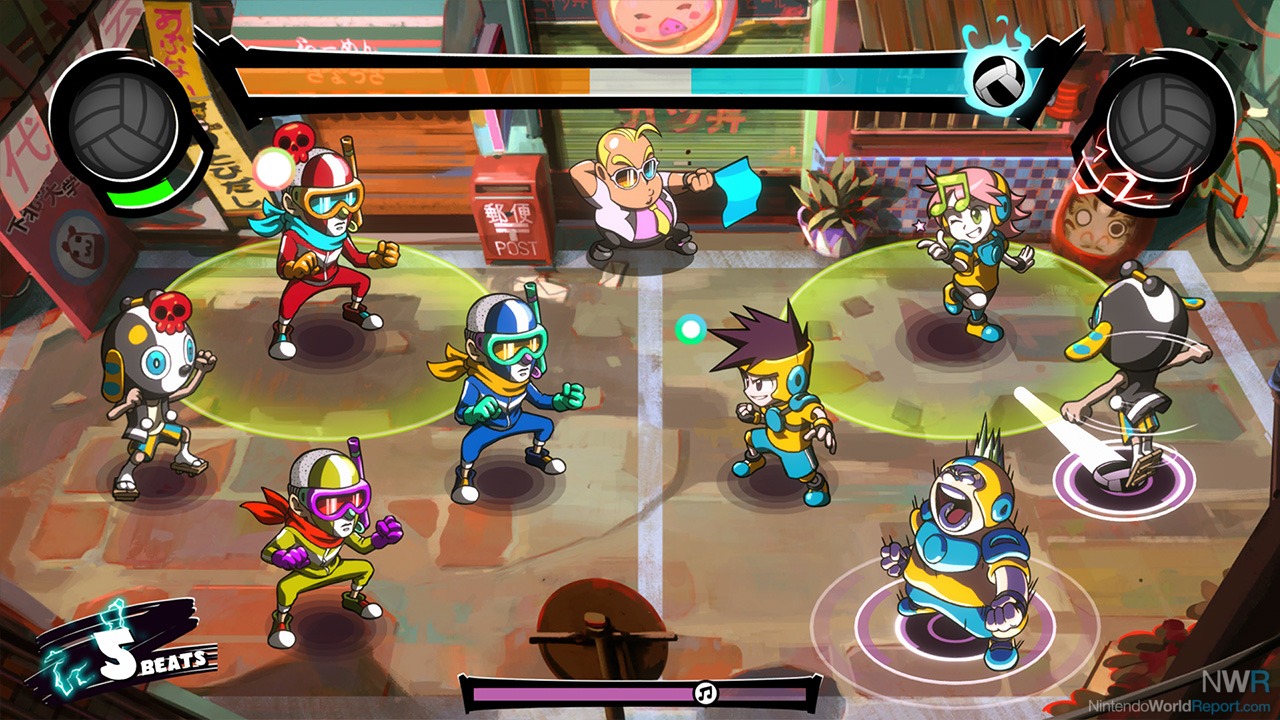 The occasional frustration came not from those as much as the flow of the match. The meter of whose winning can swing quickly after a handful of missed beats. Plainly, you can do nearly perfect throughout the entire match and fumble at the end of the song to lose. There is no cumulative effect of good results other than maintaining good standing on the meter that determines who wins/loses. Conversely, this also means if you fumble out the gate, there’s incentive to keep persisting, catch your footing, and laying down perfect button prompts to gain the advantage before time runs out, so there is a natural give and take to the game handling progress this way.

Visually, this game is slick, stylish, and stunning. Heavily cribbing off anime stylings, there’s a slew of well drawn, expressive characters that are colorful and diverse that exude personality without speaking a word. With each lead-up to a button press the characters charge-up like they’re about to send an explosive attack, each misfire is accompanied with a look of horror or anguish, and a rotund announcer accents each beginning and end of the match with wild looks of excitement, boisterous pronouncements, and an oddly rhythmic but uncomfortable looking gyrating dance of celebration that has me in stitches whenever I see it. The music is persistently upbeat in tempo, a sort of electronica style soundtrack that works well to map against rhythm game levels. But while none of it is bad, does becomes somewhat redundant the more matches you play. It would have been to Super Dodgeball Beats’ benefit to accrue a much more diverse library of music to mitigate this, although perhaps it was a decision made to keep the tone stylistically consistent.

Super Dodgeball Beats is simple to grasp, challenging at times in uneven ways, but generally fun with a visual flair that is humorous and bombastic in a delightful way. While I’d have hoped for some different ways to apply challenge, it doesn’t become insurmountable and the narrow scope of options lets you focus on jumping right into a match. Even with some repetition in the soundtrack, this is another solid rhythm-based game on the Switch that you can put some headphones on and get tunnel vision enjoying it.