Waking up from a wonderful dream and then immediately having it again.

When it comes to Game Boy Zelda games, Link's Awakening is very much my favorite. The fantastical environments and a story that unchains itself from the staples of Zelda lore make for a fun experience. The game is weird and doesn't do anything to hide that fact in the slightest. Still, despite being a wonderful game, it did have its fair share of faults. After all, they did try to put the feel of a 16-bit Zelda into a two button handheld. This made item management a drag and slowed down the flow just a teensy bit much. Now that The Legend of Zelda: Link's Awakening has gotten a new lease on life with Nintendo Switch, you have to wonder what more has been changed. Indeed, this new version of Link's Awakening makes a lot of positive changes, but that doesn't make the experience a perfect one.

I've said it a few times, but the notion deserves to be repeated: the setting of Link's Awakening is second to none. Koholint island is such a grand place to explore, with unique characters at every step. From the beginning of the game, where you meet Marin and Tarin, the way the game opens up is inherently great. You start exploring your immediate surroundings in Mabe Village, participating in your first activities, and taking baby steps out in the world. You will see Chain Chomps roaming about, Ulrira hiding behind a phone, and even some children playing around. While the world is filled with danger, there is a relaxing feeling that comes from being in the towns and interacting with other characters. Even the ultimate goal, which sees you escaping from the island, doesn't seem that daunting at first. Above all else, the atmosphere created by Link's Awakening is unlike that of any other Zelda game.

What I find charming about Link's Awakening is that I don't have to be urgent. During 16 hours with the game, I found myself quickly going off the intended path. In my opening hour, and this is no joke, I would continuously farm for rupees so that I could fish and play the Trendy claw machine game. Both of these activities are simple by design, but quickly become entertaining due to their simplicity. Naturally, I go far away enough from the intended path as is. Collectibles are an important part of the Zelda mythos, and the Sea Shells and Heart Pieces are cleverly hidden. Sometimes you will have to go through a dungeon fully; other times you will stumble upon them by sheer luck.

Link's Awakening's main course is exploring the huge overworld and its various dungeons, which are the stars of the show. You could say that the overworld is a huge dungeon in itself as well. Koholint Island is a far more connected place than in the Game Boy originals, and almost seamlessly goes from screen to screen. The emphasis here, however, is on ''almost.'' You see, when the Nintendo Switch version tries to load in new areas, the frame rate takes a massive hit. It is basically sliced in half, which is a bit of a nasty problem. The dungeons are exempt from these issues as they load by room, which actually works quite well. 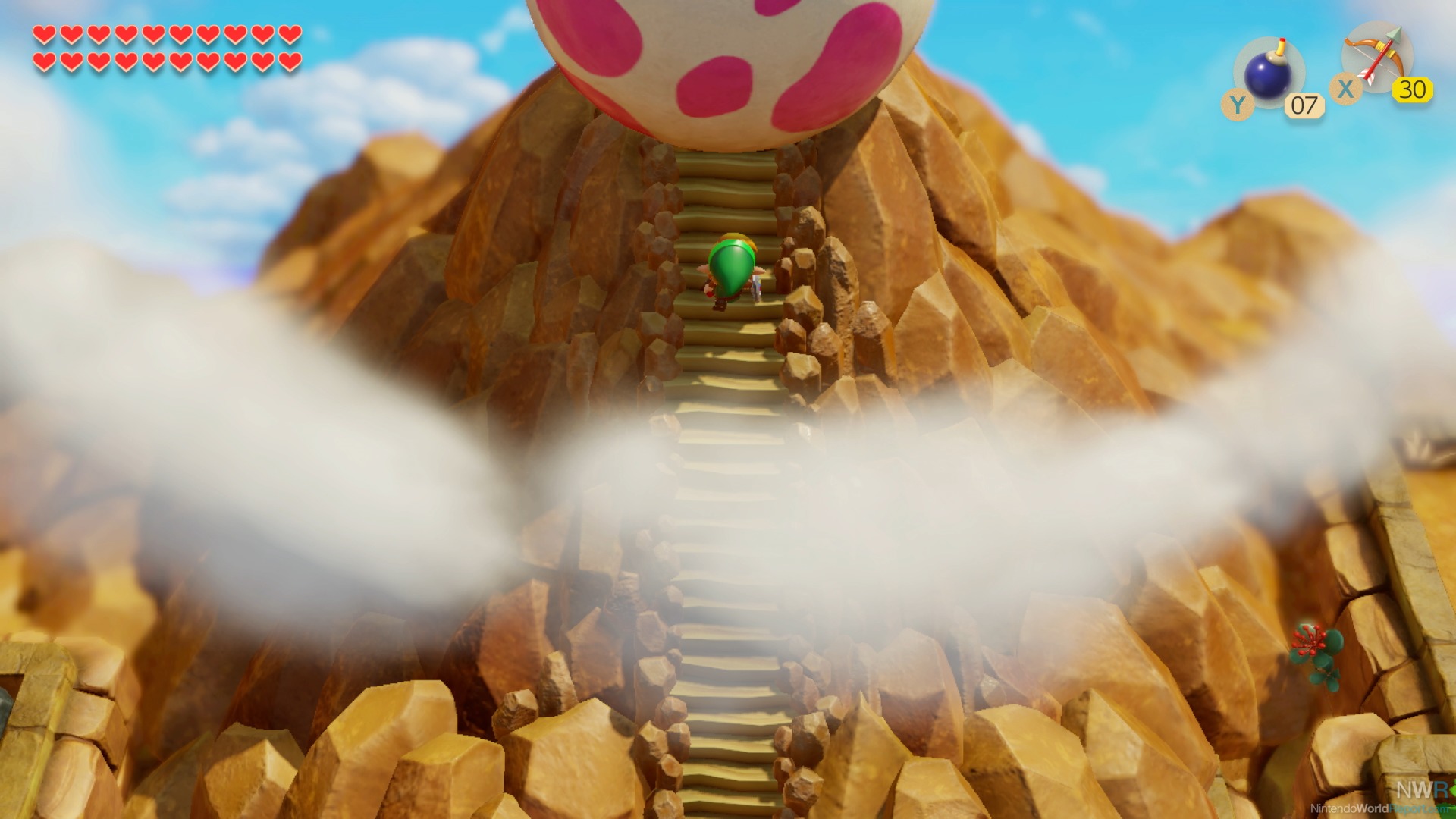 The gameplay loop is the Zelda fare you know, but done in a profound matter. You will navigate through the overworld map, searching for clues and potential puzzles to solve. By completing a string of events, most of the time it will land you the dungeon key you need to enter its respective dungeon. From there, you will move from room to room and find the structure hidden within all the chaos. A key item or mechanic always plays an essential role, and seeing the patterns is equally important. By collecting enough keys, you will eventually find your way to the boss room where an unrelenting challenge awaits. The patterns are fairly doable, but you will need to figure them out as you go. At the end, one of the magical instruments awaits you, giving you the next hint that you require to progress.

What makes the gameplay more enjoyable than the original game is the change in flow. With the limitations of the Game Boy, you constantly had to swap out your equipped items. By the end of the game, this becomes an absolute pain and breaks away from what is generally a very endearing title. The Nintendo Switch release utilizes the full extent of the buttons with the sword, shield and items like the Power Bracelet immediately getting added to your arsenal. The Roc's Feather, which allows players to jump over gaps and obstacles, still has to be equipped. For the majority of the time, that and the item of the moment were the ones equipped. The later dungeons see you combining items in a specific way, but that is something that logical thinking can easily solve.

Speaking of fixes, I could keep talking for ages about them. One that really impresses me is the map screen. As you explore the world, more of the map gets filled in and you can see everything at a glance. It is very easy to zoom, and see what ground you’ve already fully explored. The game offers a memory section, too, allowing you to see the important notes that you’ve received. Koholint Island is equipped with some handy features as well. There are now more warp points than ever before, allowing you to traverse the map more quickly. The island is such a connected but compact place, so to spare you from seeing the same screens too frequently, Nintendo saw fit to simply include more warps. 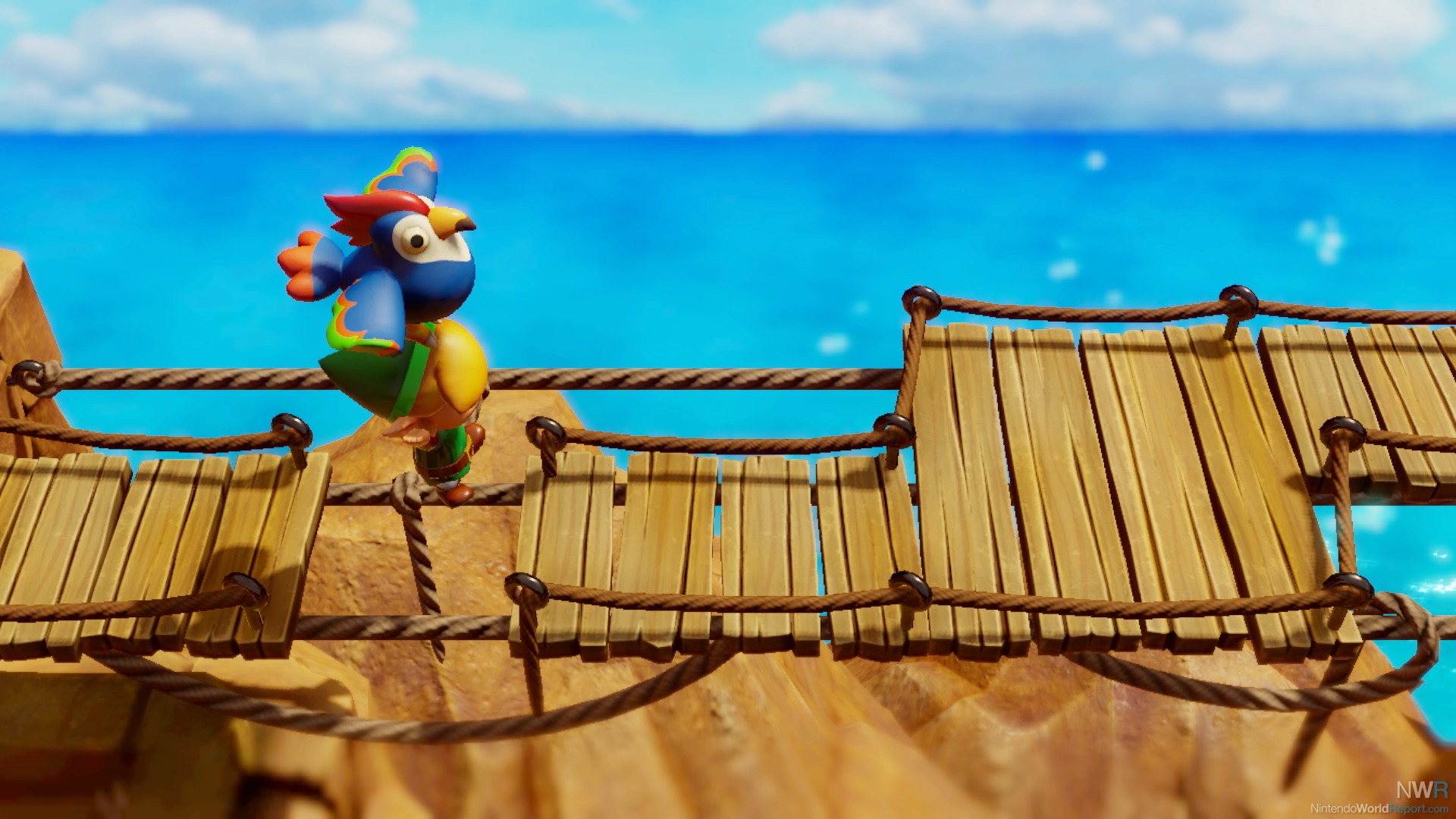 When it comes to features, there are two big changes as well. First of all, the Photo Store from the Game Boy Color version is no longer there. Instead, we have the Chamber Dungeons. It is here that you can arrange various dungeon rooms together, and create some unique challenges for yourself and others to play. Don't expect a Super Mario Maker-esque mode here, but I did have fun playing through them for the rewards. Dampe constantly gives you new goals to meet, which encourages you to do better every time. Nonetheless, if you really want to share your layouts, you can only do so with an amiibo. A slight bummer, but the Photo Store never played a huge role either. The other added benefit is that Hero Mode is available from the start. By enabling this version of the game, players will not get heart pick-ups and fairies are really hard to come by. I only tinkered around with it a bit, but I do like the heart-pounding tension of Hero Mode.

The presentation of The Legend of Zelda: Link's Awakening isn't perfect, but it is workable. The game looks stellar when it comes to its art style, and the world is beautifully recreated. There are some lush backdrops and almost claymation-esque characters to boot. And oh, Link's smile. How I love Link's smile. If that doesn't touch you, you might not have a soul. On the downside, there is that frame rate issue in the overworld. In addition, Link's Awakening has this weird blur effect at the bottom of the screen that makes everything it touches look odd. It likely ensures that certain elements in the overworld can respawn, but the effect in general really doesn't make me happy. The soundtrack, however, is on point. I adore Link's Awakening's music, and the love the composers have given the game is staggering. They use different flavors, like mixing Game Boy sounds with new instrumental elements, but I'm really behind it.

The Legend of Zelda: Link's Awakening, despite its share of technical mishaps, remains one of the most wonderful entries in the series. The charm, gameplay and world building are wonderful to behold and deserve to be seen. The selection of smart fixes makes the game less of a grind and mostly an experience that keeps on trucking. While I don't think much of the Chamber Dungeons and other added trinkets, the refinements made to the overall flow make the journey worth it. For newcomers or Zelda veterans, Link's Awakening is a hoot from beginning to end.

Not paying $60 for a remake of a 30-year old game, no matter how pretty it looks. Played and beat the original on my original 5lb. grey brick, so this price point is just ridiculous.

Did someone just wake up from a coma and find out the price of the game now?