They're painting the town black & blue.

I’ll admit up front that my knowledge of 1989’s River City Ransom (which you can play on the Switch NES app) is pretty insubstantial. It’s one of those NES games that I played for fifteen minutes, created a save state, and moved on to something else. There’s a sequel—River City: Tokyo Rumble—that I have not played but now kind of want to. In 2019, WayForward and Arc System Works have collaborated on a sequel-of-sorts, a sort of gender-swapped version of River City Ransom in which series regulars Kunio and Riki are the ones who need rescuing, and it’s up to their girlfriends—Kyoko and Misako—to save them.

Either solo or with a buddy, you take to the streets of River City tracking down clues and beating up half the population. Kyoko and Misako play very differently, but they both kick equal amounts of ass. The girls travel through a large interconnected city, although it’s divided into distinct sections, each of which culminates in a boss fight. In general, your job is to receive some sort of quest, go find the components, then return to the quest-giver in order to move on to the boss fight. For example, the girls want to question a rock star, Noize, about Kunio & Riki. However, Noize’s bouncer won’t let them pass unless they can prove they’re superfans. Thus, Kyoko & Misako go looking for NPCs who will tell them about Noize. Once they have three tidbits, they return to the bouncer, who lets them move on. 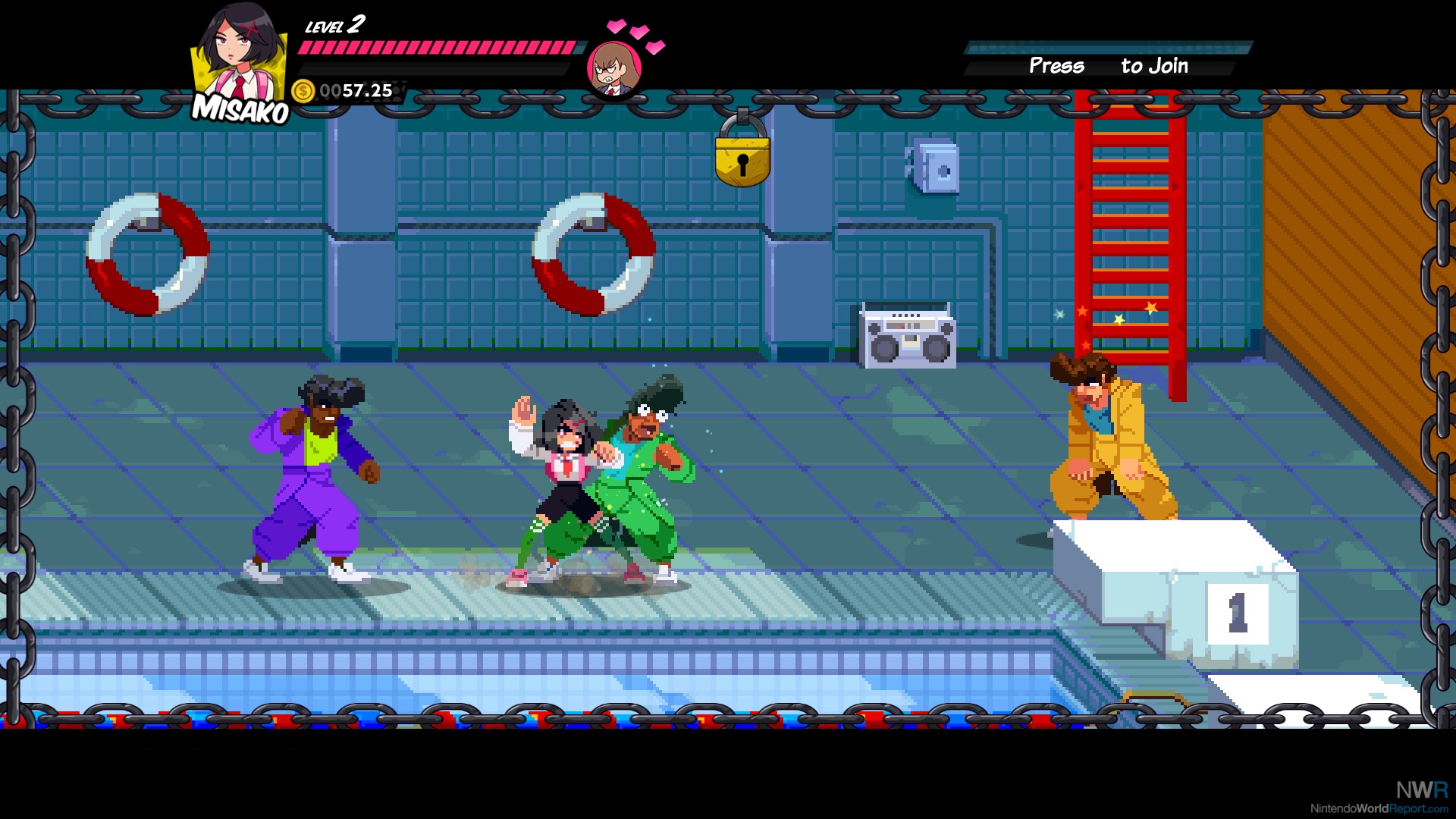 A game like this lives or dies based on how fun the brawling is, because you will be brawling 90% of the time. Thankfully, WayForward implemented several wrinkles to the formula that make things interesting. First, Kyoko & Misako can both level up, increasing their HP and stats, and (to a certain level) learning new attacks. They can purchase additional techniques at dojos. They both have an almost overwhelming number of moves that all involve the X, Y, A, and directional buttons (or left stick). You can grab stunned enemies and do several different things to them. You can pick up downed enemies, hoist their bodies over your head, and use their bodies as blunt instruments. You can grab one of a menagerie of available weapons that happen to be lying around and use them until they break.

Seriously, there are a ton of weapons: trash cans, park benches, baseball bats, yo-yos, wrenches, tuna fish, and many more. Each weapon has its own hit count, after which it breaks. In many cases, fortunately, new weapons are within easy reach. On occasion, the screen is “locked” and forces Kyoko & Misako to fight a number of enemies before being able to move on; these kill rooms are usually tied to quests. Another handy option is to recruit enemies. Once you clear the room of all but one goon, they’ll beg for mercy, at which point you can recruit them to your cause, calling them in to use a single, typically powerful, attack by pressing the L button (think Marvel vs. Capcom or, dare I say, Project X Zone). However, these allies can also take damage and will eventually be knocked out.

The girls can also equip two accessories, your collection of which will balloon as things progress. They typically offer small and weirdly-specific buffs (do 5% more damage to students). I found myself sticking to three or four accessories and ignoring the rest, as I didn’t want to go into the accessory menu every time a certain enemy or weapon appeared. There are a large number of shops in River City, mostly restaurants, but also accessory and video game stores. Buying food generally refills your HP and may give you a stat boost, and you can save the food you buy for later (like during boss fights). Weirdly, you won’t know a specific item’s effect until you eat (or use) it. Also, you will never know an item’s stat buff, even after you eat it. It just doesn’t appear on the item description, which I didn’t like. 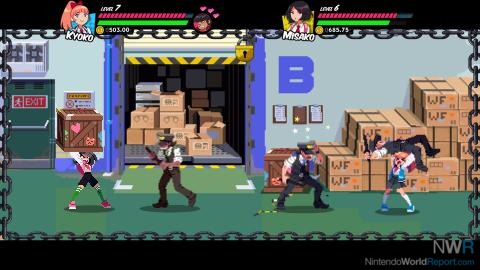 Playing solo unfortunately means you pretty much have to pick Kyoko or Misako and stick with them for the entire game, as leveling one up does not level up the other. You always have the option, upon restarting your save file, of picking either girl. However, since enemies level up along with you (which kind of defeats the purpose of leveling), whoever you’re not playing as may wind up being severely underpowered. The solution is to play co-op with a friend and try to keep both girls around the same level. Co-op, by the way, features a “friendly fire” toggle, which is appreciated. Co-op with just the Joy-Cons works surprisingly well, although I prefer directional buttons when pulling off some of the attacks.

As tends to be the case with WayForward games, River City Girls looks great, featuring a semi-retro pixelated look and an impressive amount of wonderful animations (Kyoko’s forward-Y attack borders on the ridiculous) and big, beautiful backgrounds. Enemies are surprisingly diverse, with a healthy number of characters and several palette swaps of those characters (gotta recruit ‘em all!). Bosses are full of personality and tend to have supernatural abilities that are fun to see. The music, which features a number of different artists and includes some actual songs, is snappy and varied; my only issue with it is that the music tends to change or reset when you enter a new screen (I can’t tell if it’s randomized), which is somewhat jarring.

River City Girls is a great brawler, and though I wouldn’t say it rises above its genre, it’s still an excellent example of one. Either solo or with a friend, you’ll have a good time.

I was getting excited until:

However, since enemies level up along with you (which kind of defeats the purpose of leveling), whoever you’re not playing as may wind up being severely underpowered.