An enjoyable roguelike, turn-based RPG that may feel familiar.

In the early part of 2016, I played a brutally challenging roguelike that was set against a gothic background: Darkest Dungeon. The game has since come to Switch and has always been well-regarded for its unique style and addictive, one-more-run gameplay. Vambrace: Cold Soul is constructed very much in the vein of Darkest Dungeon, with key differences being the addition of a heroine and a greater narrative bent and the subtraction of some of the variety and the difficulty. Opening with a steep learning curve, created mostly through an ineffective tutorial and a lack of in-game information, Vambrace eventually finds its footing, but only after you do.

As Evelia Lyric, you arrive at the frozen city of Icedaire, which has been cursed by a being known as the King of Shades. Around the city is an enchanted field that is deadly to the touch, and so the citizens are forced to hunker down and eke out their survival. Evelia arrives with a relic called the Aetherbrace, which allows her to create an opening in the field, and so the leaders of Icedaire call upon her to explore the areas above the city in an effort to find and eliminate a variety of threats, including the King of Shades himself. The story provides an effective backdrop for the gameplay, and if you are so inclined there is much to be learned about the world of Vambrace from various NPCs and codex entries scattered about.

There are two primary forms of gameplay: exploration and combat. During exploration, you are given a top-down view of the city or large area, and you can enter separate buildings, dungeons, and other spaces. In each of the large areas above Icedaire, your four primary dungeon-filled spaces, you will go through a series of dungeons to reach the boss of that area. Within every dungeon is a set of rooms that will randomly have a campsite, treasure, event, or combat encounter in each. In these smaller areas, you have a side-scrolling view of Evelia and your party members, and you only move from left to right or vice versa. 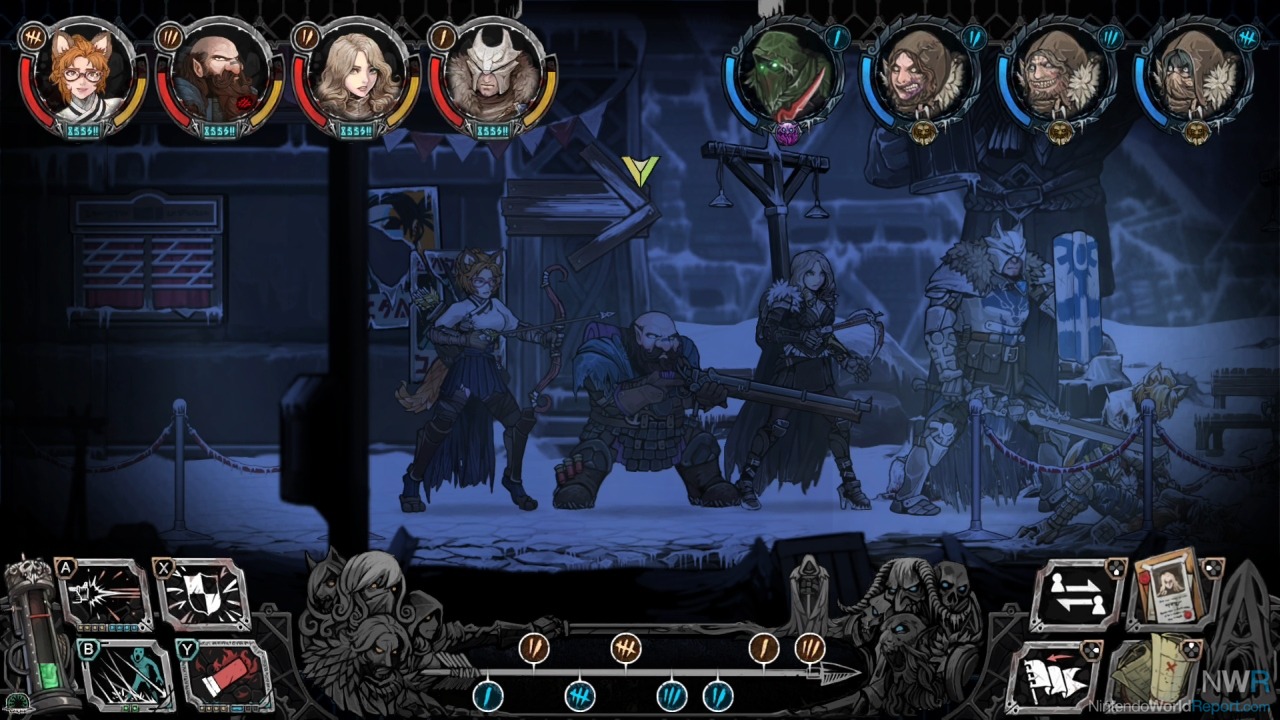 In combat, you have the same side view of your characters and your opposition, with both parties capping out at a maximum of four, and the arrangement from right to left determines what moves your characters can use. Fortunately, Evelia has a crossbow that turns into a pickaxe, so she can fight from any position. You then take turns attacking, defending, and using abilities to survive and eliminate enemies like undead spirits, golems, dark assassins, and other threats. You recruit up to three party members to join you from among classes like Blood Mage, Dragoon, and Scoundrel, and they each have different abilities and attack ranges. For instance, the Dragoon is a good tank but is largely ineffective when placed in the back two rows of your party. The Shadowmancer can poison enemies from any position but is light on hit points, so that’s one role you can position behind your other party members. You can also equip each character with a single relic that boosts their stats, and purchasing, crafting, and upgrading relics early and often is essential.

No experience points are awarded and the spoils of combat are generally items used for crafting or selling. Evelia can gain a few bonuses to her stats in the form of perks awarded generally after completing a chapter. In addition to health and vigor (stamina), there are five other stats that govern how much damage you do in combat and how easily you avoid traps in the rooms, among other things. Carrying capacity is also a key measurement that you have to carefully consider since picking up everything you come across and becoming overburdened is basically a death sentence. I learned the hard way how important it is to store crafting materials in the stash in town, rather than bringing them with you at all times. 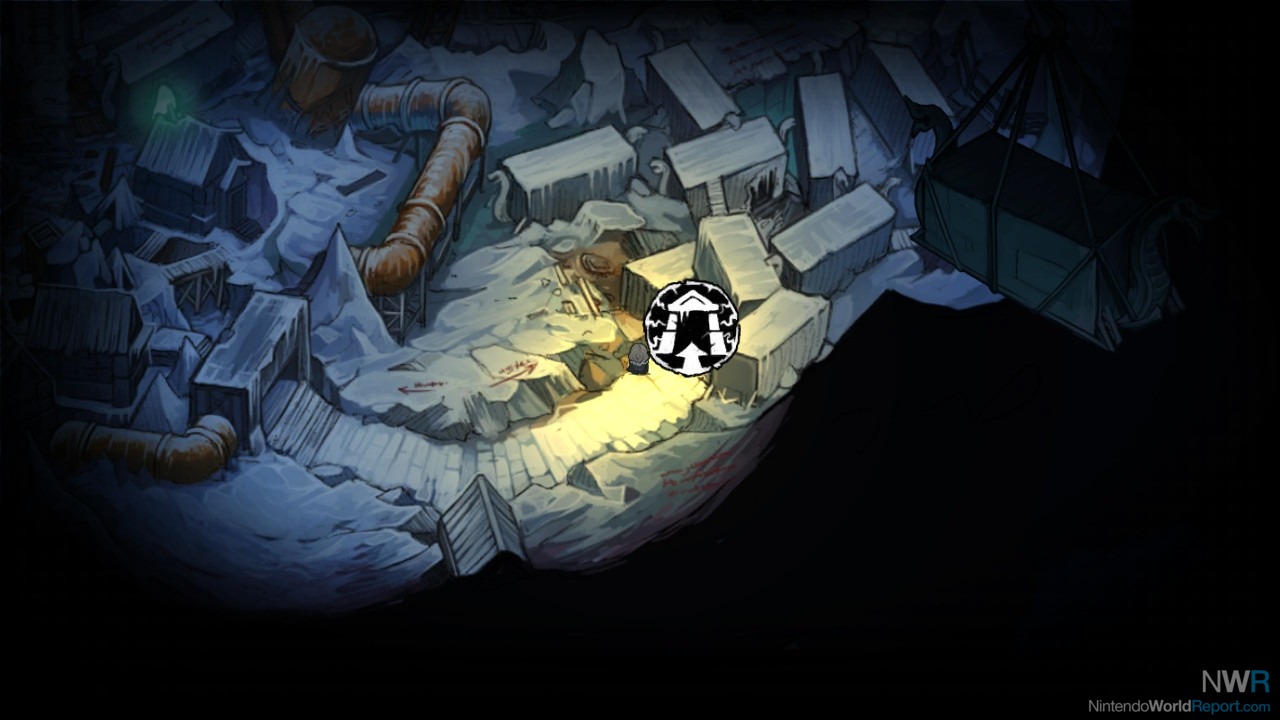 The first two chapters of Vambrace—from a total of seven—introduce you to the key players and the primary conflicts at play, but there are a few twists in the narrative that are fun and unexpected. More important, however, is the fact that the game doesn’t really set you up to be successful. It doesn’t tell you that you need to go on a few runs through the dungeon areas to collect items to sell so that you can outfit your characters and have a stock of potions. It’s very likely that players will be turned off by the first 5-7 hours and give up, a point I almost reached myself. Fortunately, once you figure out the mechanics and strategies needed to make real progress, the adventure becomes much more enjoyable.

The issue, then, is one of transparency; the UI and how information is presented to the player is very unfriendly. During combat you’ll inflict and be inflicted with various status ailments that show up as symbols on your characters’ portraits, but you can’t actually find out what’s wrong with you unless you use trial-and-error and then memorize or write down what the symbols mean. I went through dozens of potions trying to figure out which curative I needed to restore my character to full strength. Another thing that isn’t clear but seems necessary for completing the game is knowledge of camping and overwatch. Overwatch is a rating and an ability that allows you to restore health points and vigor when you find a bonfire to camp at. By camping effectively, you can progress through the surrounding areas of Icedaire without constantly needed to return to base, forgoing all progress made. You also have to go into the character information menu to see what your abilities do, rather than just highlighting the ability in combat. Cumbersome is the word that comes to mind. 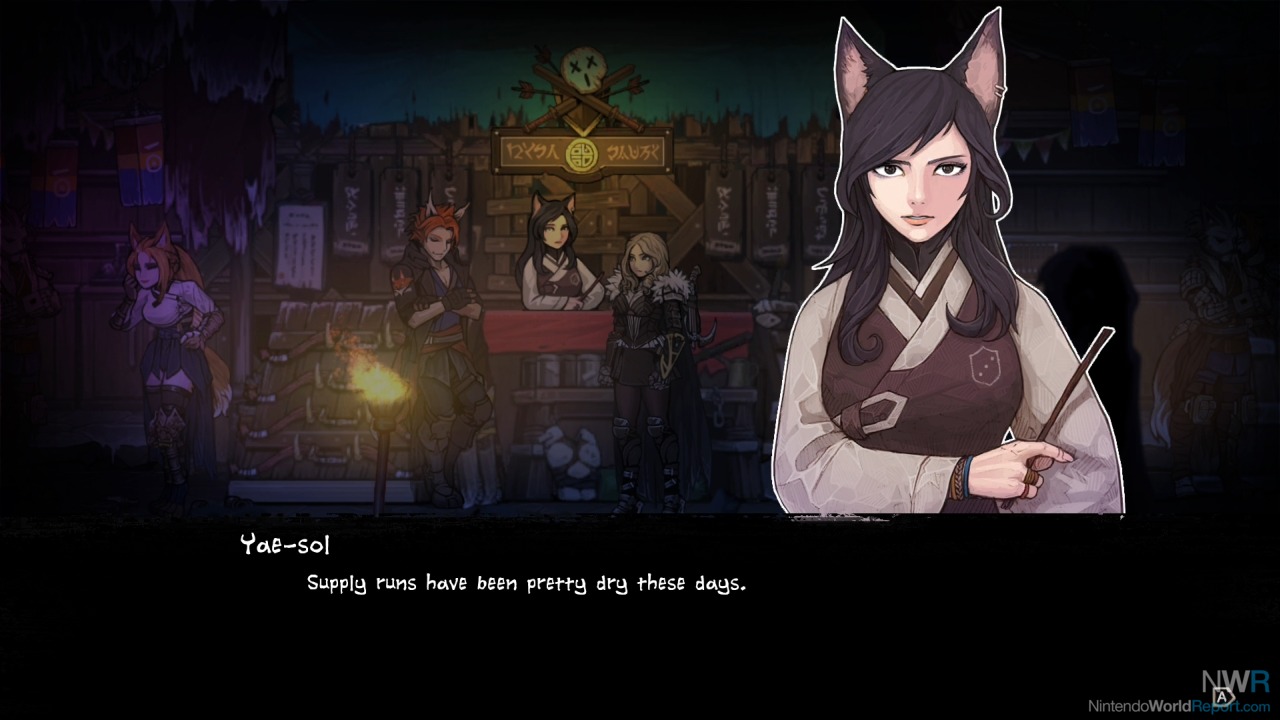 After struggling with the early segments of Vambrace: Cold Soul, I eventually found a successful set of party members and a viable strategy for arriving at and conquering each area boss, which bolstered my resolve to see the game through. Once it clicks, Vambrace becomes a fun and brisk experience that trades in the desolation and grind of Darkest Dungeon for a more compact and less replayable adventure. There are costumes to earn from sidequests and achievements to earn that unlock in-game art, but there’s no new game plus to expedite the process. That said, there are a few times when you get to make key decisions that affect the story slightly and reward you with different costumes, so there is some incentive to return. Turn-based RPG enthusiasts and those who wanted more story out of Darkest Dungeon will find a lot to like here, but those who want a more streamlined or directed experience are given the cold shoulder.