An enjoyable yet somber tale about life, death, and reincarnation.

While Tokyo RPG Factor’s first two outings may have focused too much on rekindling nostalgia for classic JRPGs of old, Oninaki blazes its own trail and drops the turn-based battle system. It revolves around Kagachi, a man who belongs to a group called the Watchers that is tasked with guiding wandering souls to the afterlife. The story is unquestionably heavy, with moments of levity few and far between. The gravitas of the narrative and the excellent action-RPG combat help to separate this third outing from its predecessors, but it’s not without shortcomings.

Kagachi’s world is one in which he and his fellow Watchers can see and interact with dead people, but these are individuals who are unable to reach the afterlife due to feelings of anger, regret, longing, or sadness in them or their loved ones. Those unable to be reincarnated become Lost, and it is the job of the Watchers to guide these souls to their next destination. Much of Oninaki’s world and story revolve around saving the Lost and understanding how reincarnation works. From the outset, you learn that there are people opposed to the beliefs and methods of the Watchers, and so threads of mystery are pulled through the narrative. Overall, the story is an interesting one with unexpected twists and turns that I won’t spoil here, but the second half does suffer from some pacing issues. 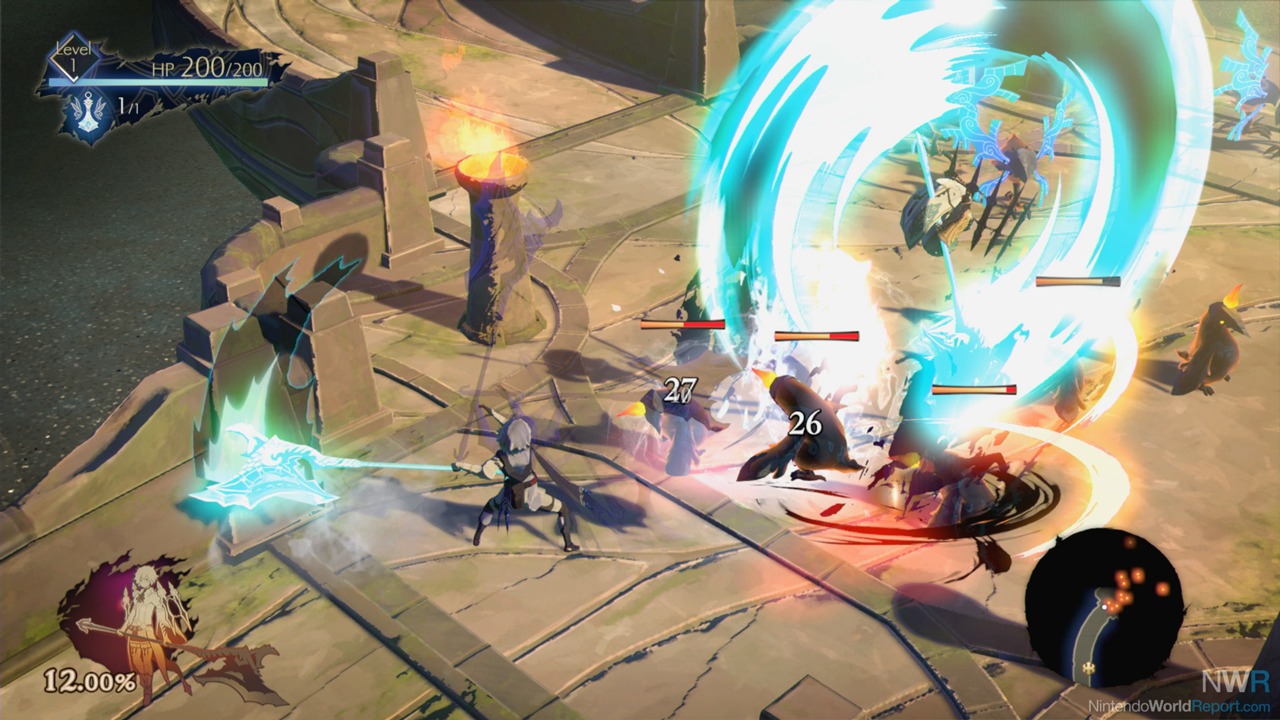 What truly shines in Oninaki are the combat and progression mechanics. Your starting weapon is a sword and its accompanying Daemon, Aisha. Daemons are unique Lost who died with strong, unsettled emotions, and throughout the game you encounter about a dozen who join with you. Each one brandishes a different weapon, such as an axe, a lance, or a crossbow, which you also use when that Daemon is active, and you can easily switch one out for another depending on the enemies or boss you are fighting. In addition to a basic attack and a mid-air attack, each Daemon can equip four different skills that are mapped to different buttons and have a slight cooldown after use. Kagachi gains experience and levels from defeating enemies, but all of the Daemons also have their own individual skill tree with active skills and passive abilities that you can unlock by using them in combat. You can also find items in chests and by completing side quests that allow you to unlock abilities on any Daemon’s skill tree. 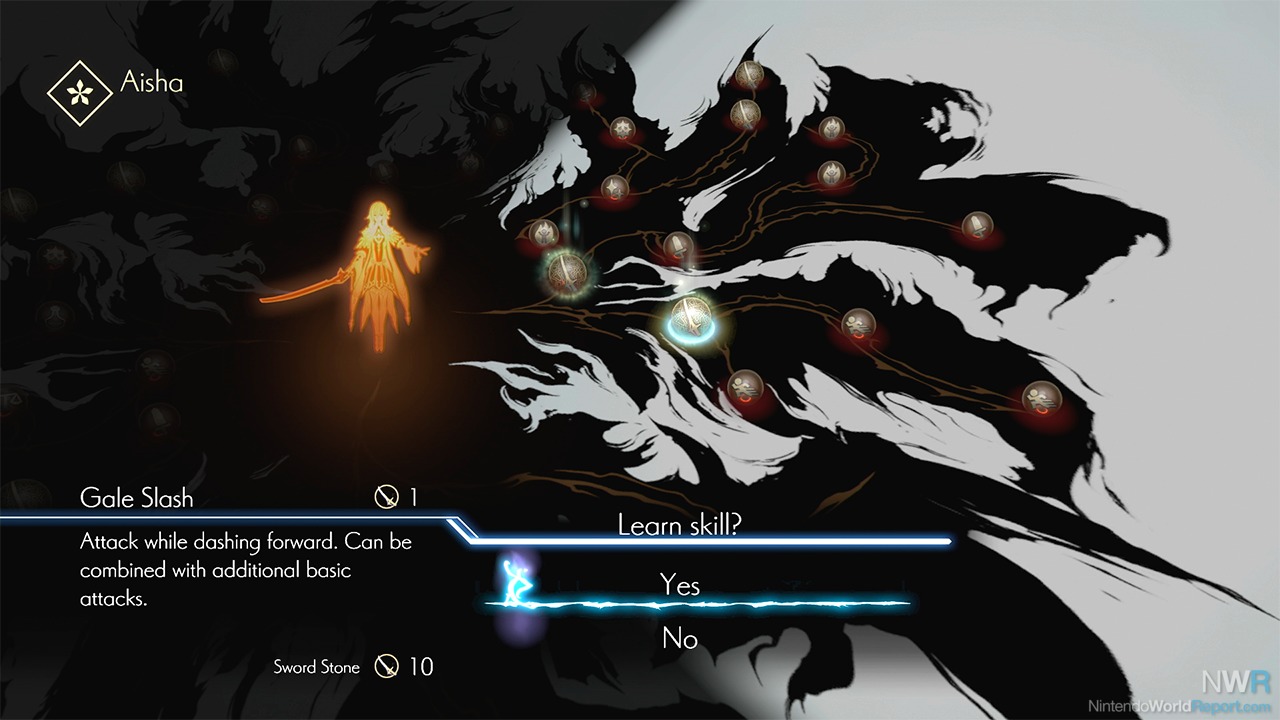 Going even deeper into the skill trees and the skills themselves, you’ll find that after using a particular skill over and over, you’ll eventually be rewarded with perks that can add neat benefits to that skill. Aisha’s Gale Slash is a straight-forward dash attack that is helpful for closing the gap between yourself and your target, and a couple of the perks that I’ve added to this ability reduce cooldown and increase my attack power with a successful strike. On the skill trees, you’ll also find Daemon Lore that tell the background stories for each Daemon in short but simple cutscenes. Naturally, these are as sorrowful and intriguing as the main story itself, reminding me a little of Xbox exclusive Lost Odyssey, but they provide further incentive for trying out or playing with different Daemons. Finally, there is a percentage in the corner of the screen that builds up as you attack, and when it reaches 100 percent and beyond, you can activate the Manifest ability to increase your destructive power temporarily.

Oninaki has a unique visual style inspired by anime that sets it apart from I Am Setsuna and Lost Sphear. Color and light play a major role in each of the many environments you traverse, especially given how often you’ll be switching between the Living World and the Beyond, the land of the living and the land of the dead, respectively. In every area you explore, you can freely move between these two realms, and you often have to in order to reach new places. Parts of the Beyond will be cloaked in total darkness until you destroy a particular monster or construct in the Living World. The way in which everything around you changes color and tone when entering the Beyond is really quite mesmerizing; in a sense, each new dungeon, field, or trail is actually two. 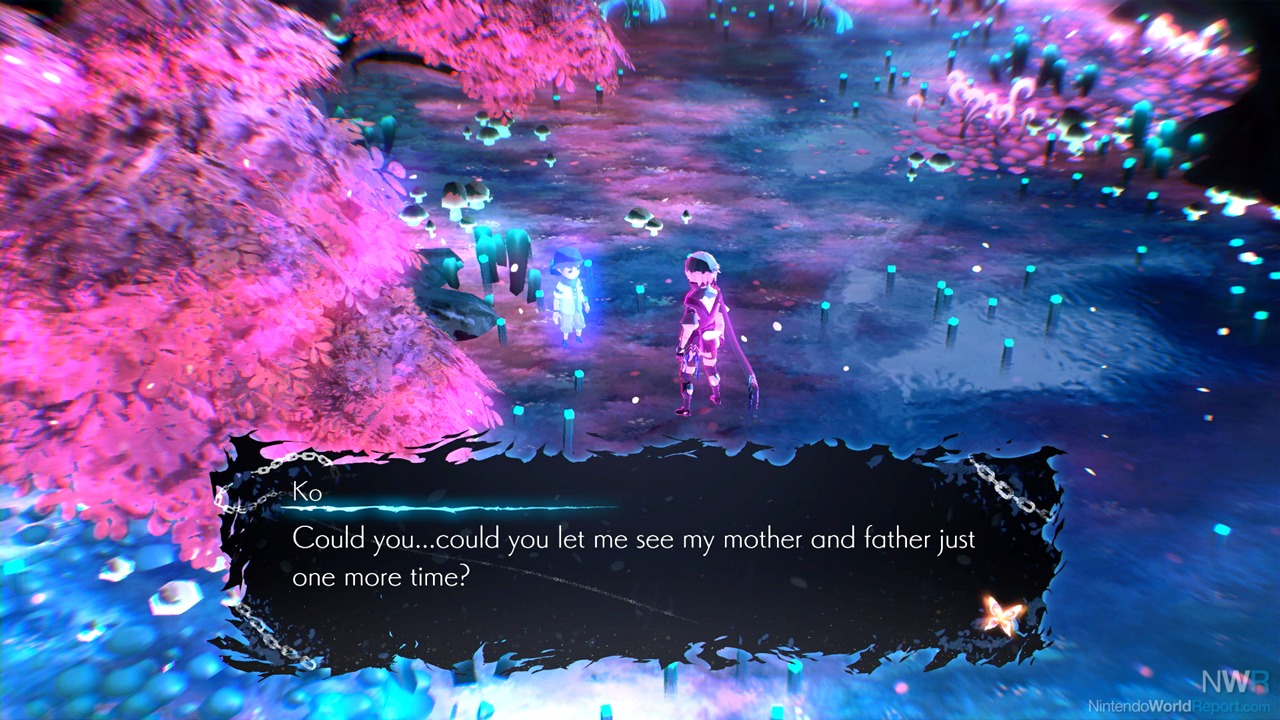 Unfortunately, it’s not all sunshine and roses in a game about death and dying. There is no English voice acting in Oninaki, which may not matter to some people, but I think it would have added to the impact and weight of the story. Certain segments are actually presented without any dialogue at all, and these feel jarring given that they come at especially poignant moments in the story. The music doesn’t really stand out, and there is also a decided lack of variety in terms of enemy design. You’ll encounter the same penguin-looking creatures from the beginning to the end of your 15 to 20-hour playthrough. Even some of the bosses are repeated, but fortunately that’s only true for a select few. Side quests also seem overly simple in their design, usually requiring you to escort a Lost soul from one area to another. Load times were a little longer than I would have liked, too.

Tokyo RPG Factory’s Takashi Tokita, of Final Fantasy and Chrono Trigger fame, was given more creative freedom with Oninaki, and that decision has certainly paid off. This is an enjoyable, thought-provoking, and stylish RPG that stands on the shoulders of the developer’s previous efforts. Pacing issues and a lack of variety hold it back from being truly great, but Oninaki is absolutely worth a playthrough, if you’re not averse to the solemn subject matter. The stellar combat feels almost like hack-and-slash, and the overall story compels you through the experience. If this is the reincarnation of Tokyo RPG Factory, they’ve come back less a factory and more an artisan.