This sequel cranks up the sci-fi and modernizes the gameplay but it's not all wine and roses.

As you may have read in my recent-ish review of Turok: Dinosaur Hunter Remastered, Acclaim announced this sequel, and development actually began, prior to the release of the N64 original. One wonders what would have happened if Turok had failed to blow up the charts. Seeds of Evil was developed by the same team, which swelled in size as development progressed, and it’s easy to see why: Turok 2 presents a huge expansion of the original concept. It also included support for the Expansion Pak (which allowed a resolution of 640x640; huge at the time) and an impressive four-player multiplayer mode. Night Dive Studios remastered the original and released it on Steam a few years ago, which is where I played it originally. Now it’s on Switch—but how does it stack up?

With Dinosaur Hunter so fresh in my mind, it’s impressive how divergent Turok 2 is. The core loop—finding keys in enormous levels in order to open portals to the next level—is still intact, but while the original took place in largely homogeneous jungle environments, this game includes six wildly different locations and a whole host of non-human enemies. Essentially foregoing tight continuity with its predecessor, the story in Turok 2 posits that a massive alien, the Primagen, who has been stranded in his spaceship for an unclear period of time, has awoken from hibernation and has ordered the destruction of five “Energy Totems,” which the Lost Land’s governing body, the Lazarus Concordance (sigh) erected to keep him imprisoned. Bad things will happen if he escapes, I guess.

And so, an alien woman named Adon gives Turok a summary of each level and its denizens and asks him to complete certain missions before finding the exit and briefly engaging in tower defense. The game’s second half also involves some pretty impressive boss fights. 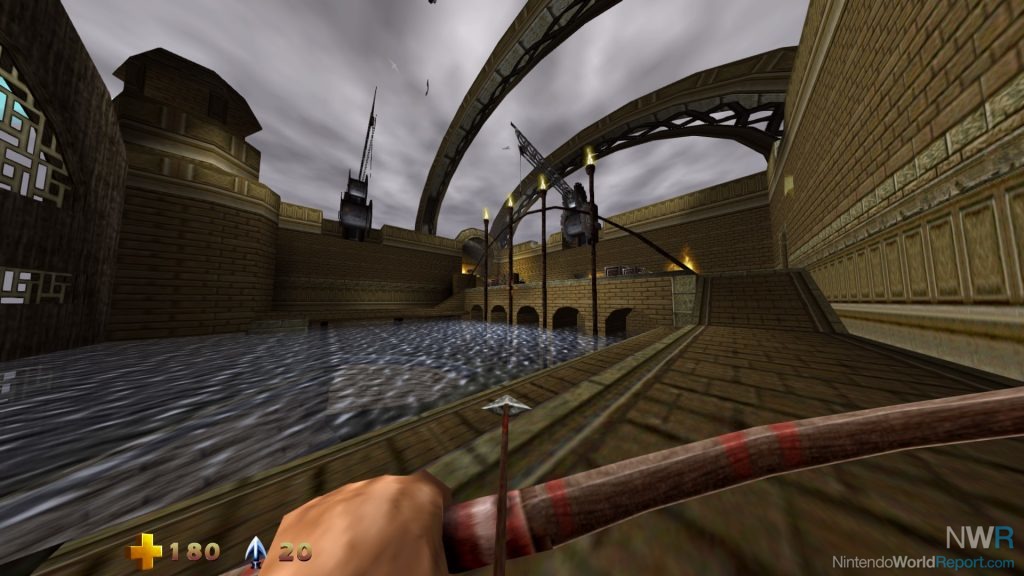 While the gunplay is essentially identical to Dinosaur Hunter, Turok 2 does introduce some quality-of-life improvements: some weapons have a sniper sight, allowing for more precise attacks. When you pick up explosive ammo, you can freely switch between it and your normal ammo. Most enemies are now vulnerable to headshots. The game features two non-lethal weapons: the tranquilizer gun, which may as well be an empty slot in your inventory, and the charge dart, which is unbelievably useful. Turok 2’s piece de resistance, however, is the Cerebral Bore. If you know nothing else about Turok 2, you know about the Cerebral Bore. Introduced fairly late in level 4, the Bore fires head-seeking missiles that burrow into an enemy’s head before exploding.

Turok 2 also introduces Sacred Eagle Feathers and warp portals. Sacred Eagle Feathers, when brought to the correct warp portal, give Turok special abilities which, in theory, can be used to access hidden parts of each previous level’s map. While this is true, the game doesn’t dress up the fact that these abilities are essentially keys used to get other Feathers or Primagen Keys (six of which are needed to fight the Primagen). The backtracking can be a bit of a drag, too, because Turok 2’s biggest issue is the level design.

I’ve gone on record as saying that Dinosaur Hunter’s level design was ahead of its time, taking huge environments and smartly incorporating alternate paths that eventually double back to the main path—you are never far from where you need to be. That’s not the case here; Turok 2 is much more of a corridor shooter, and heavy use of the auto map is not just encouraged, but practically required. While each level is impressively unique, problems within each level abound when one corridor looks dreadfully similar to every other corridor. Navigating through the River of Souls (level 2) and Lair of the Blind Ones (level 4) is an exercise in frustration—the latter especially ranks up there with the worst first-person shooter level design I’ve ever had the displeasure of experiencing. Night Dive Studios did what they could, though, incorporating icons signifying important switches, items, and keys that you might very well pass up otherwise. The best levels are the ones that are a bit more linear—Port of Adia (level 1) and the Death Swamps (level 3) are probably the best examples. Hive of the Mantids (level 5) and Primagen’s Lightship (level 6) are somewhere in the middle.

Every level has two or three Checkpoint Portals, from which you can secure health and ammo (once per portal) and, more importantly, warp to any other Checkpoint Portal in the game. On the N64, you could only warp between portals within a single level, but here, perhaps in an attempt to smooth out the backtracking, Night Dive has allowed you to warp to any other Checkpoint Portal. This is extremely helpful. However, as you will have forgotten where each portal is within a given level, expect a lot of trial and error.

As I said, there are no human enemies this time around, and every encounter demands smart gunplay, which I appreciate. Early on, you’ll be fighting hulking “dinosoids” and graceful dromaeosaurs (thankfully lacking the bizarre nasal horn of their Dinosaur Hunter cousins) but giant spiders, subterranean goblins, various insectoids, undead meatsacks, and cybernetic soldiers all await. I was always surprised and delighted by the menagerie on display. My favorite enemies are the Flesh Eaters, who you find in “fake” warp portals and their truly bizarre “Mother,” one of the last bosses in the game.

Back on the N64, Turok 2 featured a lauded multiplayer mode. I’m disappointed to say that mode simply isn’t included in this Switch port for reasons that remain unknown. Perhaps it will be added in a forthcoming patch, but Night Dive isn’t saying.

Finally, I’d be remiss in failing to mention the wealth of options that Night Dive has incorporated into this game. You can toggle just about everything imaginable, including which soundtrack version is playing. For the most part, the options are similar to those found in the original game, although I struggled somewhat with the “Bindings” because I’m not a PC gamer. 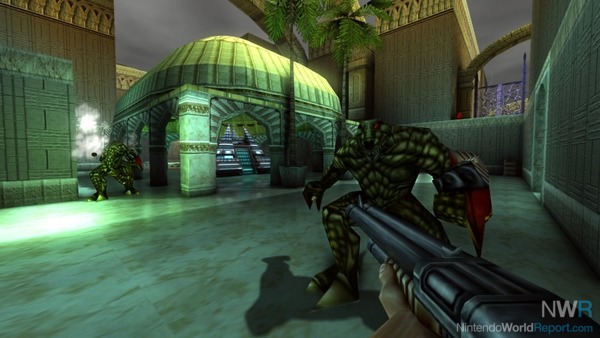 Is Turok 2 better than Dinosaur Hunter? I don’t know if I’d call it better, but it’s certainly different. Personally, I prefer the original game but I appreciate how different this sequel is, even if I’m not a huge fan of every single point of divergence. Certainly, the level design leaves something to be desired, and while Turok wields a healthy armament by game’s end, there’s a cruel practicality to virtually every weapon. The Cerebral Bore is great, but it’s a one-enemy gun. Dinosaur Hunter had the Particle Accelerator and Fusion Cannon, both of which wiped out entire landscapes of enemies. This may be a consideration for Turok 2’s more closed, corridor-heavy environments, which is another thing I don’t love about it. However, the enemy designs and overall uniqueness of the environments really is special.

Just don’t be surprised if you need to take a break or two during the Lair of the Blind Ones.

Is there a quick save?  I'm pretty sure I remember seeing that the Xbox One version had that, but I might be mistaken.

There is! Unlike Dinosaur Hunter Remastered, you can save any time you want here; super nice to have.

Was devastated that the multiplayer mode was cut. Night Dive did confirm on their Discord channel that it will come to Switch. They are presently overhauling the netcode for all versions and once that drops they will add multiplayer on Switch. They did not say if we would get local multiplayer sadly.

Will probably pick this up eventually, but gonna wait for that multiplayer update to do so, or once I finish the first one.

I used to play Turok 2 back in the day and multiplayer so much with my friends. I wonder if there is those cheats that make you super powerful in this version like BEWAREOBLIVIONISATHAND.

There is! Unlike Dinosaur Hunter Remastered, you can save any time you want here; super nice to have.

Oh hellz yeah, that's wonderful news!  I played and loved Turok 2 back on the N64, but the save system was woefully inadequate in my opinion.  I can't wait to play this again with the ability to save anytime.