Drag me back to Hell.

The original release of Doom 3 in 2004 heralded a new era in PC gaming technology. From a pure gameplay perspective, Doom 3 wasn’t exactly putting up any portals to Hell that we hadn’t already seen before, but the game is fondly remembered by myself and many others in the same light as Super Mario 64, Super Mario World, or Rogue Squadron II: Rogue Leader. Like those other games, Doom 3 will never truly look anything other than stunning in my eyes. Many years have come and gone since then. Even since the 2012 release of the “definitive” (BFG) edition of the game, we’ve seen an entire console generation come and nearly go. In any literal definition, Doom 3 is dated. The hallway-to-hallway, monster-closet filled gameplay is old news. The textures look fuzzy. The thing is, it doesn’t really matter; Doom 3 is fun as hell.

Doom 3 on Nintendo Switch represents the passage of time in an interesting way. Sure, this isn’t the first iteration of Doom 3 on a handheld (it isn’t even the first iteration of Doom 3 using the Switch’s actual CPU), but there’s something surreal about seeing a game that once defined bleeding-edge gaming running (and smoothly to boot!) on Nintendo’s handheld console. The game runs mostly at 60 frames per second, with somewhat frequent but not particularly distracting drops. The beautiful presentation is almost entirely preserved, and even some of the corners they had to cut, like the flashlight casting shadows, can be enabled in the options menu. Doom 3 still looks and sounds great after all these years. 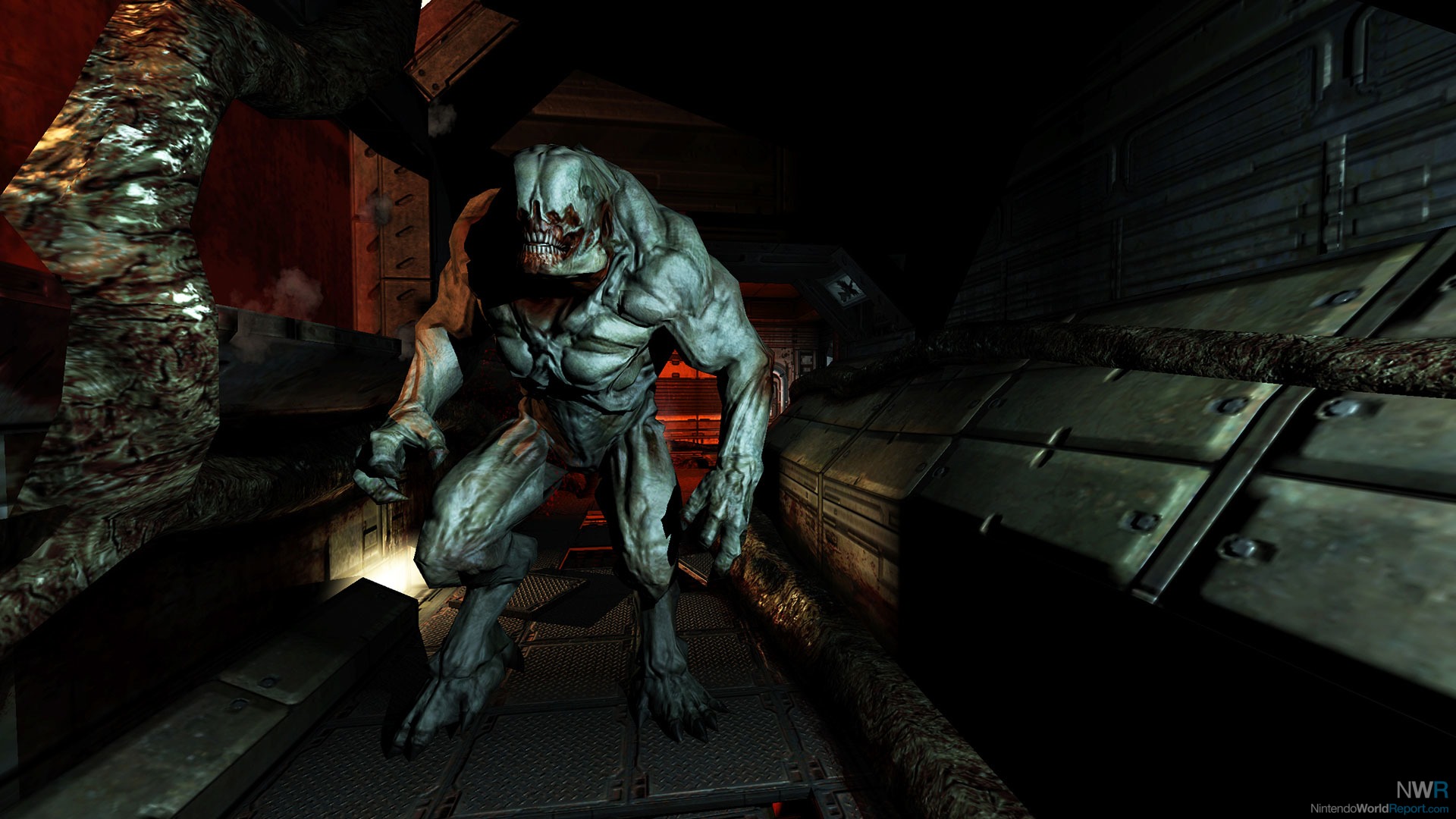 If this is your first time playing Doom 3, you’re in for a pretty standard run-and-gun shooter. Although Doom 3 has a darker, more horror-like aesthetic than the other games in the series, the classic Doom shotgun-blasting/rocket-dodging/circle-strafing gameplay is present and accounted for. The Switch version, based on the BFG remaster in 2012 released on PS3 and Xbox 360, adopts the shoulder-mounted flashlight, taking away a good deal of the horror of the 2004 original which required you to swap between flashlight and weapon. Even with this change, Doom 3 is still incredibly creepy and atmospheric. The flashlight runs on a battery which takes about a minute to drain, but refills in only about 3 seconds, which makes the entire thing feel a bit pointless.

There are a handful of rough edges on this port of Doom 3. Most notably, I had at least three hard locks while I played through the 10-11 hour campaign. Luckily, the game does a *decent* job of auto saving (although I found myself cheesing manual saves toward the end as the difficulty ramps way up), so I never lost too much progress. Two of those three hard locks came after waking the Switch up from sleep mode, so I had already saved before I stopped playing the last time. Other oddities included the game-over screen defaulting to “Settings” rather than “Load Game” about 30% of the time, which required an occasional unintentional visit to the settings menu between deaths. Also, the loading-screen hints gave me some great advice regarding the multiplayer portion of the game, a mode which does not exist in the Switch release. 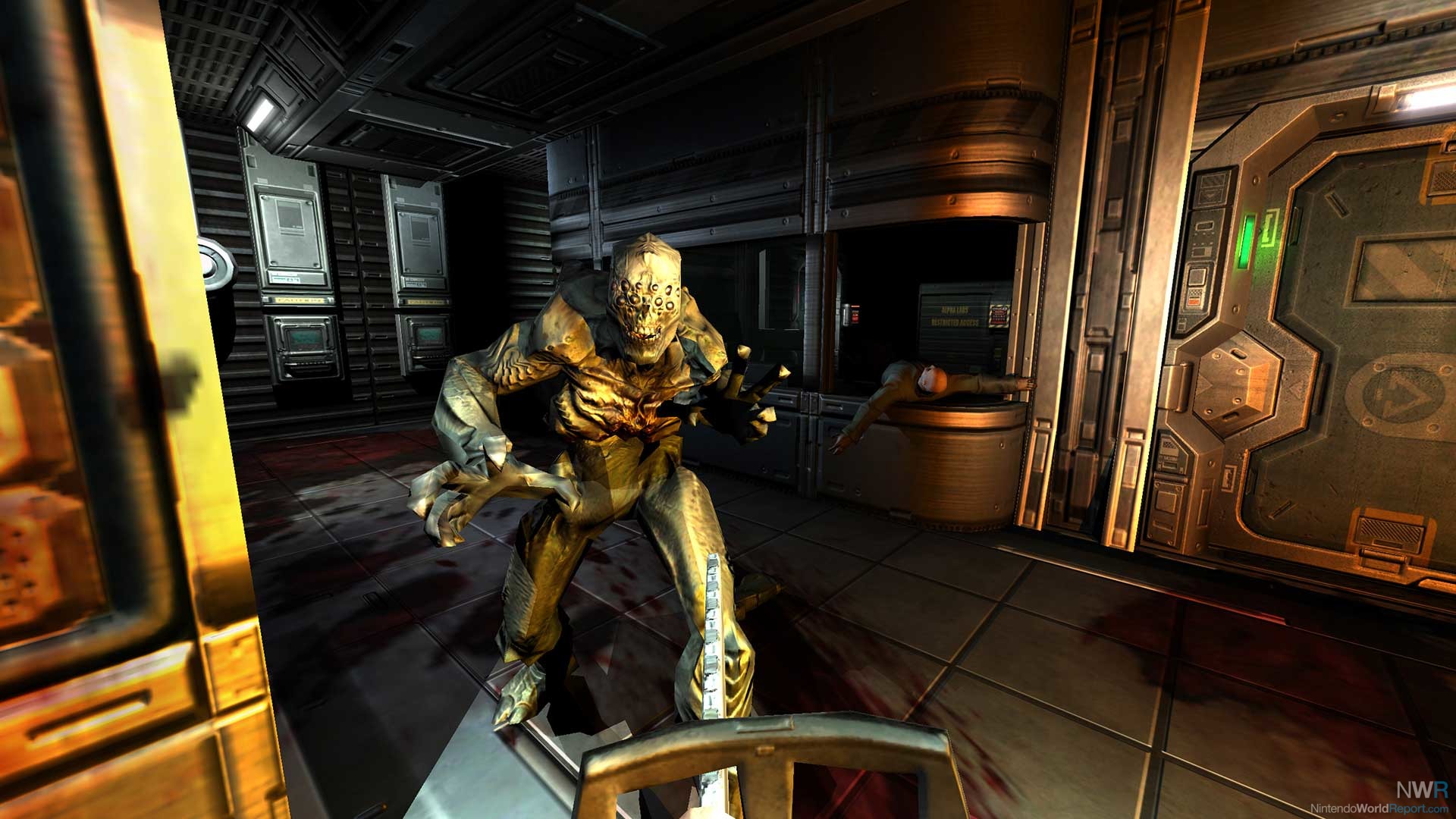 In addition to the main campaign, two bonus expansions are included: Resurrection of Evil (an expansion released in 2005) and Lost Mission (released with the BFG edition in 2012). Resurrection of Evil in particular has some interesting new mechanics, including a gravity-gun (the “grabber”), and an artifact that can slow time. Still, it’s accurate to describe both of these expansions as “More Doom 3.” Overall, they're a nice addition to the main campaign.

The Switch port of Doom 3 is faithful, and the game is a blast. While it may begin to wear thin after you kill your hundredth fire-throwing imp, there’s something incredibly rewarding about the gunplay in the Doom series. Doom 3 might not have been received as warmly as the beloved reboot that we got in 2016, but it deserves its place in history and would be a fine addition to any Switch library.