An immaculate blend of arcade and sim sports that hits for the cycle on Switch.

Baseball video games have had a bad beat for a long time, especially on Nintendo systems. With the exception of Sony’s MLB The Show, annual baseball games have been questionable at best. Specifically to the world of Nintendo, aside from a pair of arcadey Mario baseball games and some tolerable Wii outings, more traditional baseball hasn’t been good on any Nintendo platform since the all-time-great MVP Baseball 2005. Thankfully, that all changes with the release of Super Mega Baseball 2 on Nintendo Switch. What it lacks in the MLB license, this indie baseball game makes up for by being the best fusion of simulation and arcade sports gameplay in years. 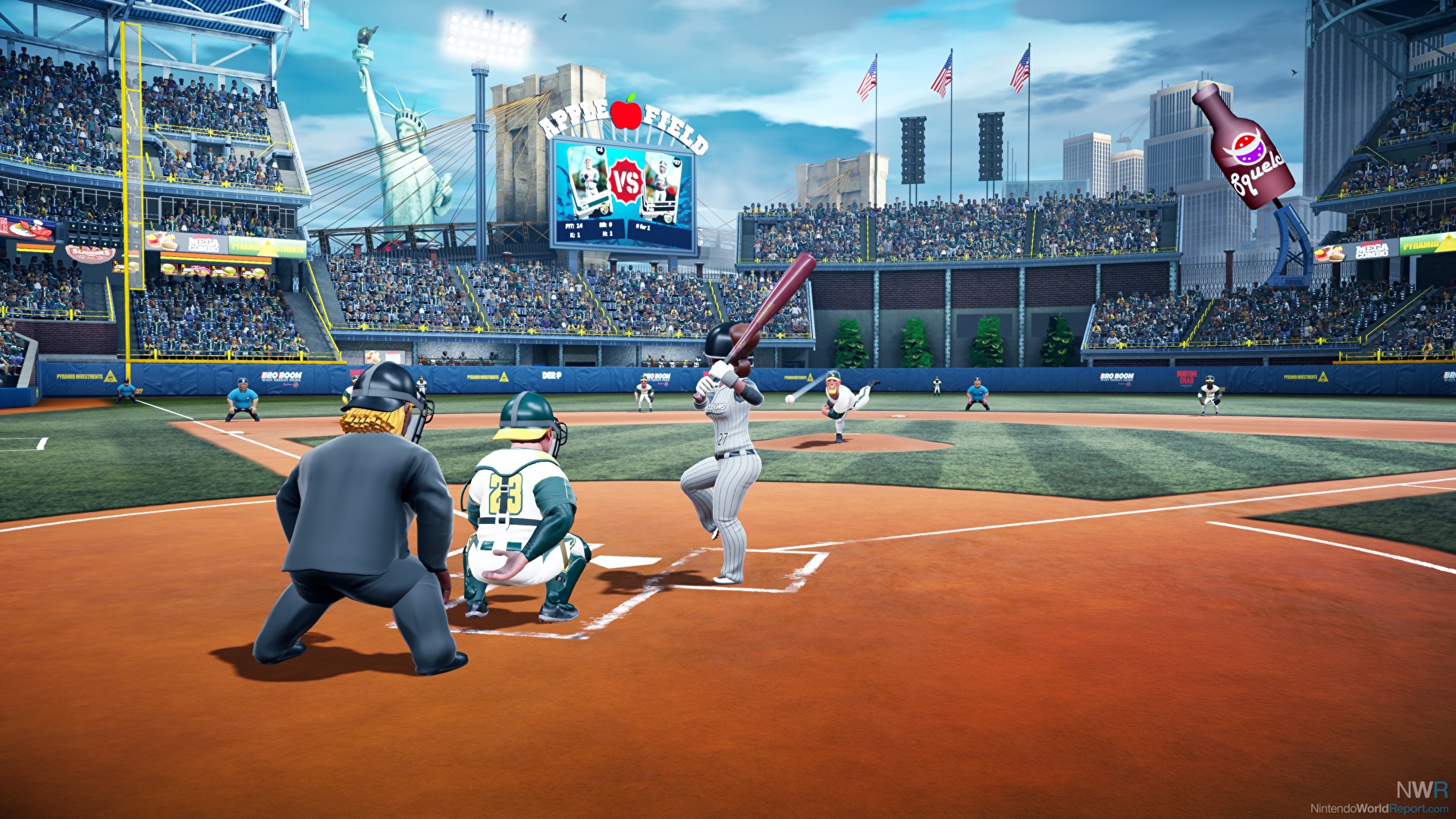 It all starts with the fundamental controls and mechanics. At a glance, the controls are approachable and simple. Tap a button with timing to swing. Pick a spot and press a button to pitch. If you’ve ever played a baseball video game at any point in your life, the basics are easy to grasp. Beneath the surface is a world of depth, as hitting features a power meter that can be triggered with proper timing courtesy of a button or stick. Pitching has a similar element, as well as a full slate of different pitches ranging from fastballs to forkballs. Straightforward tutorials explain these elements as you play and as they’re relevant.

Working in tandem with these controls is Super Mega Baseball 2’s difficulty system. Dubbed “Ego,” the challenge level is scalable from a laughably easy zero all the way to a bafflingly hard 99. Additionally, various elements of the game can be scaled differently. If you struggle with hitting, you can scale that down while pitching, fielding, and baserunning remain higher on the Ego scale. All of this can be tweaked in game as well for more minute changes. The only overall effect of the meter is on a score mostly as an engaging online leaderboard (and not tied to actual wins and losses in game). 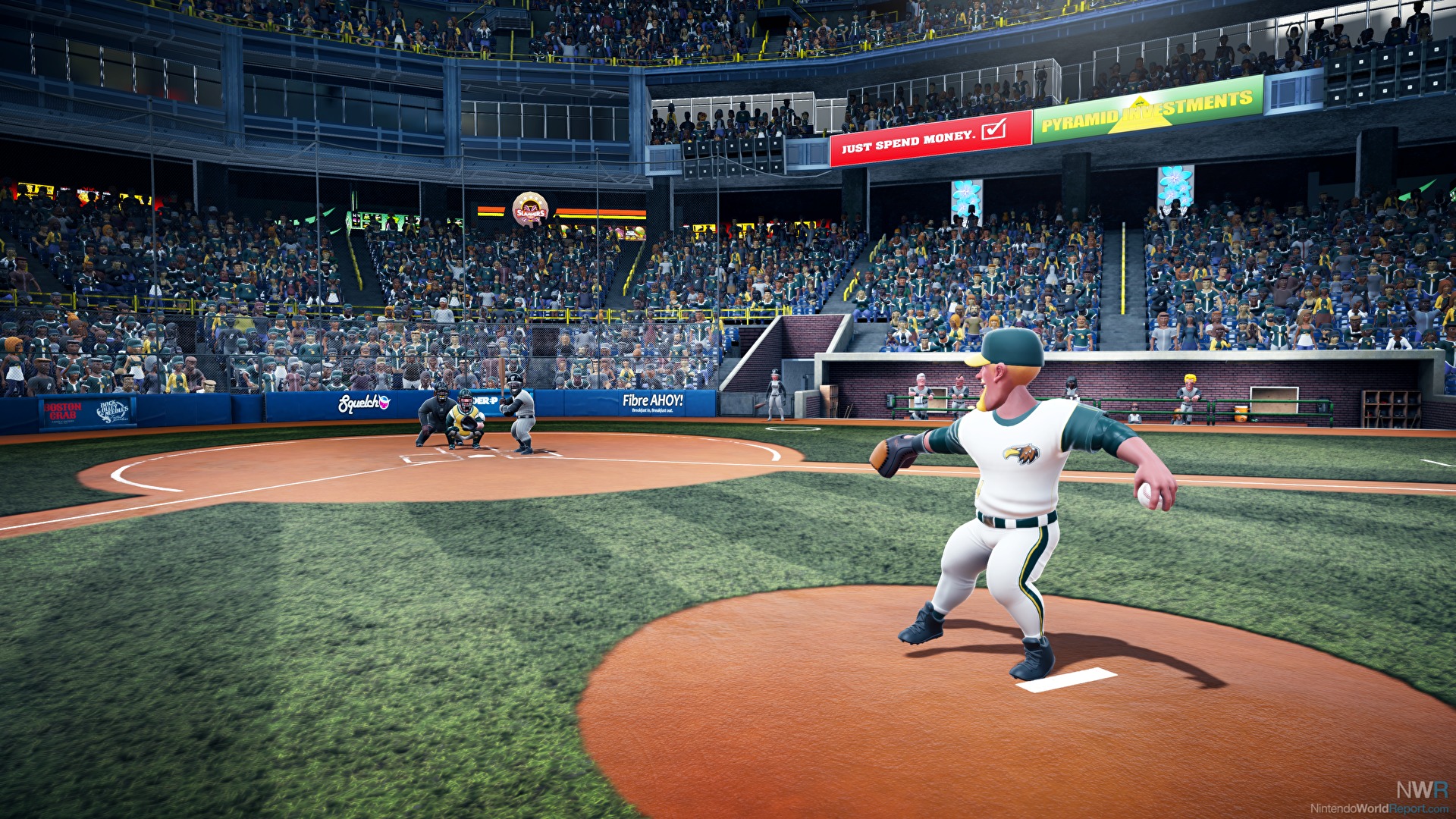 The main offline mode is Season, which comes in a few varieties that all follow a similar path: play a regular season of a minimum of 16 games and then go through a few playoff rounds. Rinse and repeat. Built in are 16 teams with cute logos and players with spectacularly silly names like Hammer Longballo, Beefcake McStevens, and Junior Young Sr. Each cartoon-like character is brimming with personality thanks to their goofy names, endearing design, and humorous animations. If the world of pre-created characters isn’t for you, you can also create your own teams and leagues. For better or worse, you can’t edit the basic 16-team league, since that is balanced for online play. The intrepid fan can recreate real baseball teams or even do their best to add in a Smash Bros. league or something.

Online play is bolstered by cross-play with Xbox One and PC (not PS4 because Sony doesn’t play well with others). The centerpiece of online is the Pennant Race mode, which allows players to compete against others to jockey for rankings and placement over the course of a pseudo-online season. It’s an interesting application that largely works very well as a broad multiplayer experience. If you’re so inclined, you can even do a full season in co-op online. 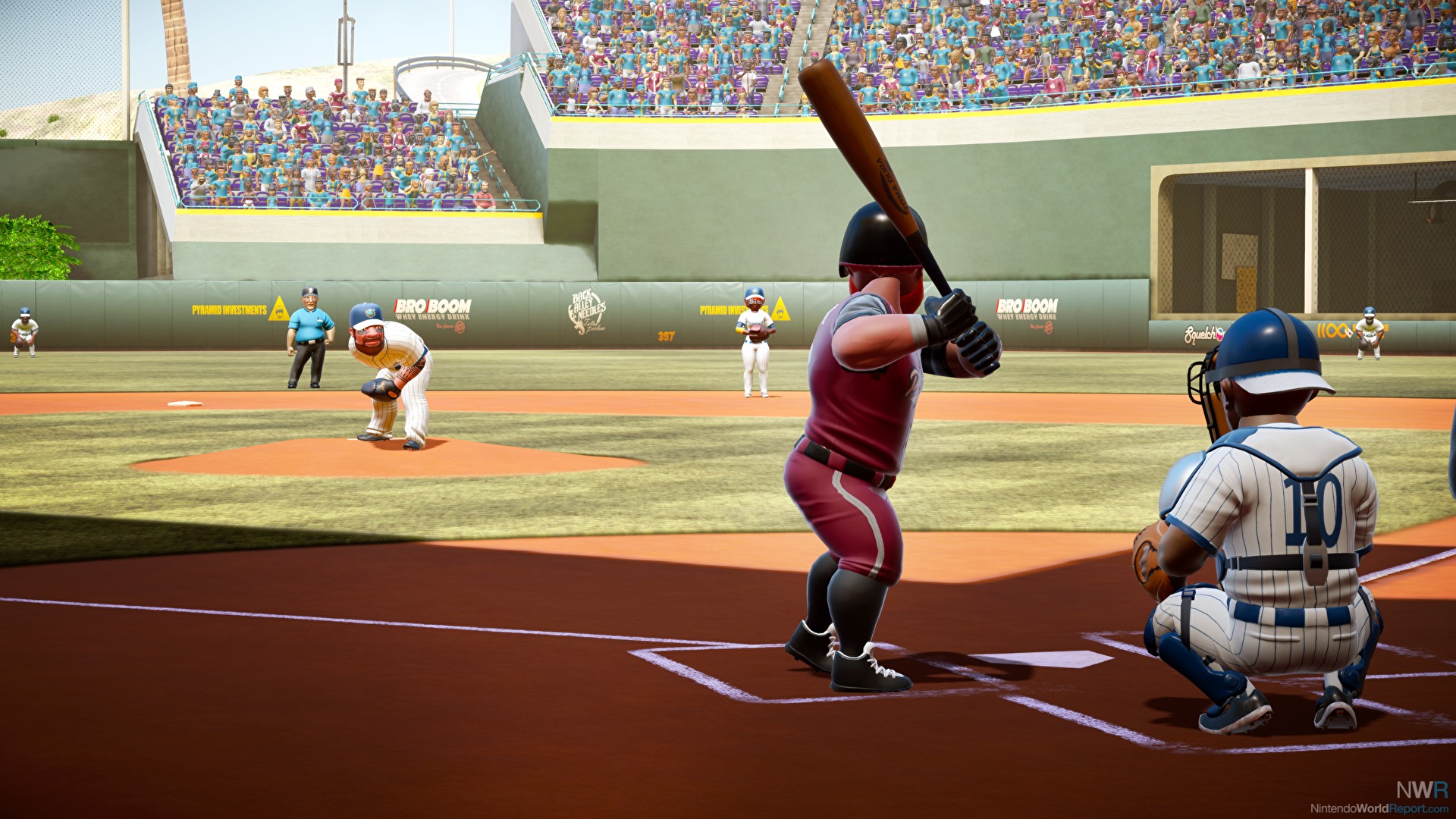 In the transfer to Switch, nothing has been lost in the process - even the three customization-focused DLC packs are baked in to the Ultimate Edition release here. Graphics are sturdy and stable docked and on the go. While I prefer the depth of having a full controller, single Joy-Con play is possible and adequate thanks to the simplistic basic mechanics. If anything, it speaks to the game’s versatility. You can screw around for laughs or get into intense matches with friends or randoms online or locally.

Super Mega Baseball 2 is a masterpiece. I’ve been playing baseball games since I was a kid and I’ve never fallen as hard for one as I have with this game. The gameplay is nuanced and engrossing for the hardcore baseball game players, while still remaining approachable for newcomers or casual players. The only knock I can dream up is that it doesn’t have the MLB license, which I don’t even really think is that big of an issue because of the bizarrely endearing and large cast as well as the immense customization options. Whether you want to play single games against friends, compete in online leagues, or sit back and binge a season by yourself offline, Super Mega Baseball 2 delivers in spades. This is a Triple Crown-winning batter, a multiple Cy Young-winning pitcher, and a first-ballot Hall of Famer all wrapped into one. This is the greatest baseball game I have ever played.

So I'm going to buy the game regardless, but does the season mode just 1 season and that's it, or can it be like a franchise and you can multiple seasons and stuff?

Love how much you beam about the game. I own a PS3 mostly because of MLB The Show. Can't wait to have a great portable baseball game on a Nintendo system again, MLB license or not.

Sounds interesting! Does it have (optional) motion controls like Wii Sports or The Bigs did for batting and throwing?