Despite some significant issues, you can't say that controlling 34 Marvel heroes isn't fun.

The situation surrounding Marvel Ultimate Alliance 3 is unquestionably weird. Announced out of the blue last December, the return of the long-forgotten series made me jump out of my seat. While I wouldn't call the Marvel Ultimate Alliance games the pinnacle of video game design, I always enjoyed them in a popcorn-esque manner. They are very enjoyable games that don't downplay the audience they are meant for: video game-loving Marvel fanatics. Luckily, I'm such a fanatic and willing to play the Team Ninja-developed third entry non-stop. The end result of the collaboration between Nintendo and Marvel is an isometric brawler that still works in 2019, even if some issues hold it back.

The story in Marvel Ultimate Alliance 3: The Black Order can be best described as totally fine. The Guardians of the Galaxy come in contact with the Infinity Stones. After a battle with the evil forces of Thanos, the stones spread all across the Earth. The Guardians join up with an ever-evolving cast of Marvel heroes to find the Infinity Stones before Thanos does. What impresses me the most are the locales that you visit throughout the adventure. The player starts on an abandoned spaceship, only to be followed by The Raft prison in New York City. It is here that you meet Spider-Man and start building up your collection of heroes. This collection sure is a rowdy bunch as they are mostly voiced in a way that showcases their personalities in full force. 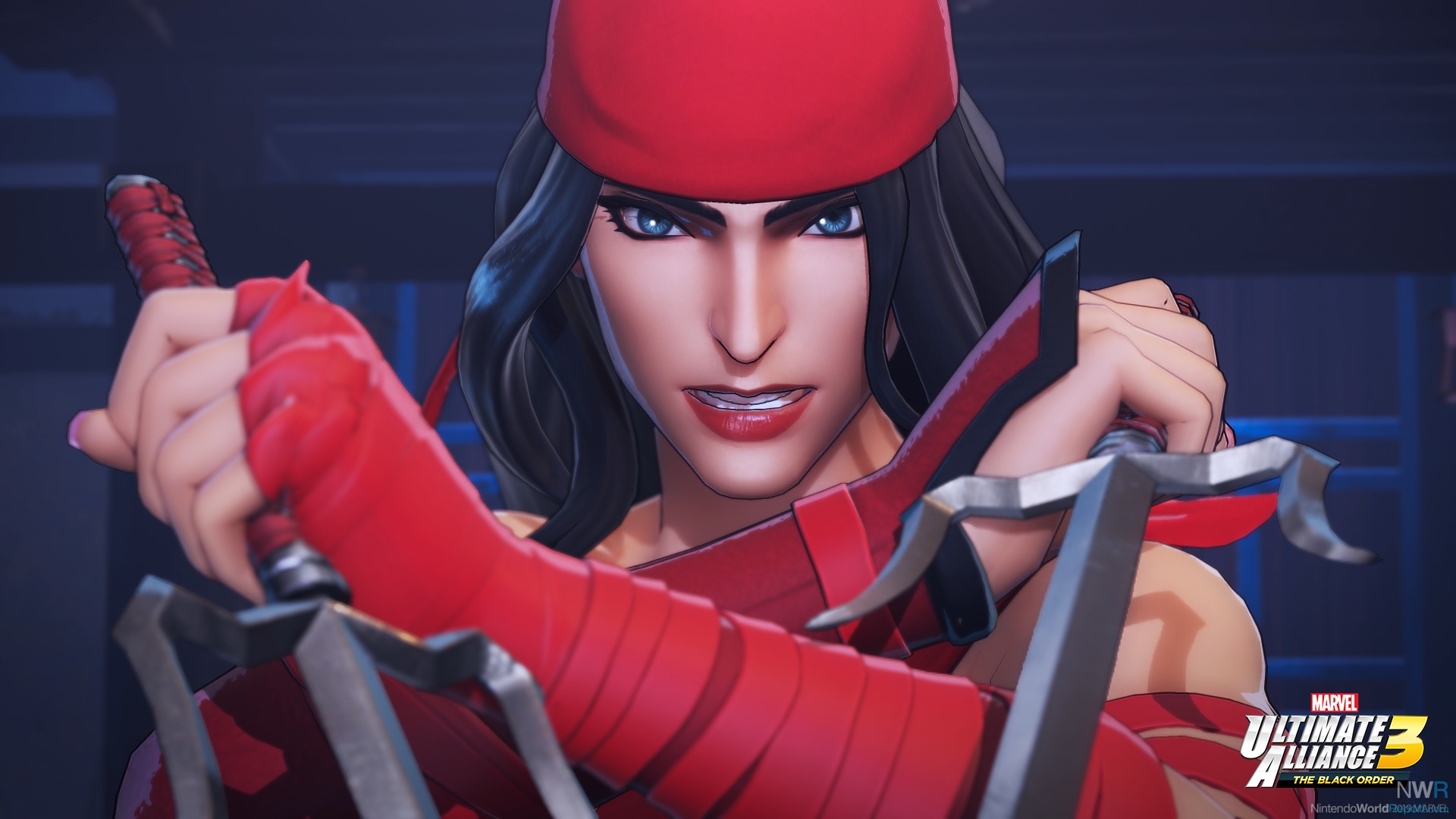 As far as the gameplay is concerned, Marvel Ultimate Alliance 3 knows how to make a sound first impression. Every hero offers a selection of attacks, manners of moving about, and an array of one-liners. The controls are easy to adjust to, with two standard attack buttons, a jump, dodging, and a bunch of special moves that you learn as you move along. The action is understandable and snappy, making it fantastic to play through. Alone or with friends, you can destroy everything in your path, solve little puzzles, and completely destroy all sorts of Marvel-ous bosses. Ultimate Alliance 3 gives you plenty of checkpoints so that you can heal up and change your characters as you see fit, encouraging you to experiment with the large roster. It is just really pleasant.

While the levels are entertaining, measured expectations are important to a degree. The locations are amazing, but don't expect much exploration. A few collectibles are strewn about, but mostly, the path forward involves going from corridor to corridor. The combat has a consistent pace so it’s easy to just romp from point to point, but the straightforward design is something more noticeable in the slower moments of the adventure. In addition, the camera placement really isn't all that good. The camera seems to shift between various angles for no particular reason. Sometimes you can freely look around, while in other spots the camera is locked at a weird angle. You can learn to deal with it over time, but the problem never fully goes away.

I spent 12 hour with the adventure, seeing my way to the end of the story as well as some of the extra content. The first batch of heroes are available early on, allowing you to mix and match with combinations. It’s easy to roll with a consistent four-character team or have a revolving door of heroes. Complementing the story are the Infinity Trials. These are harder version of sections you previously finished, but with tweaks and limitations that make for a harsher challenge. Not only will you get your usual array of power-ups to deck out your various skill trees, but some hidden costumes and characters can be found as well. With everything on offer, the Infinity Trials make for a great place to build out a character or two. 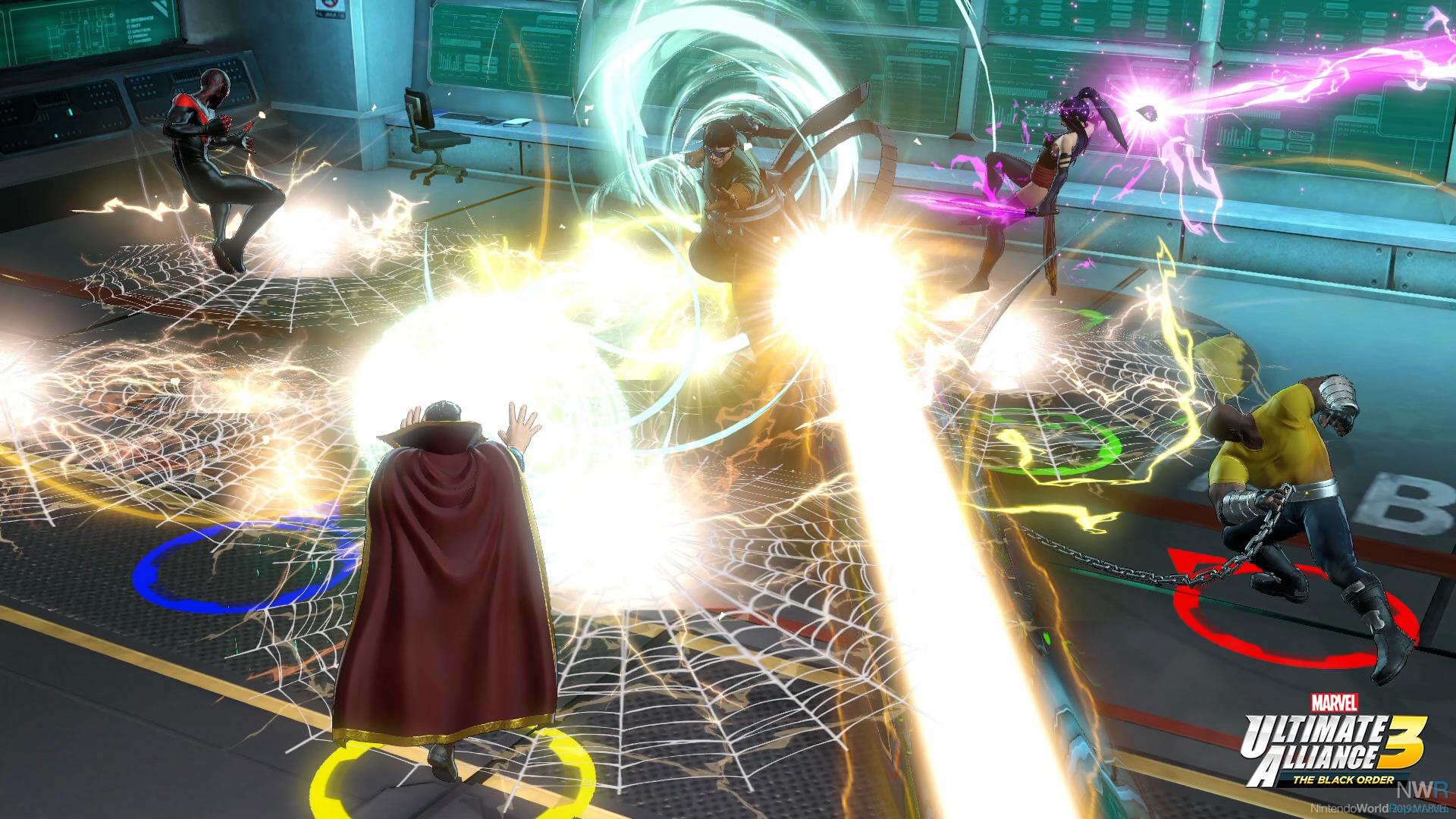 For the most part, I played through Marvel Ultimate Alliance 3 all by myself in front of a television. As a single-player game, it absolutely works and is a nice fit for the system's handheld mode. However, the beauty of the co-op here is it’s very easy to drop in and out. All you have to do is hand a newcomer a controller and they can press a button to join the fight. In addition to local play, online multiplayer is available.I was able to get some sound match-ups going with others in my playtime. You can make rooms and ensure that only certain people can join you. Mostly I stuck with people in my region, and it went off without a hitch. That being said, during my singular North American match, I did notice that two players were sort of floating across the stage.

Marvel Ultimate Alliance 3 runs nicely on Nintendo Switch, no matter the amount of enemies of screen. The various superheroes have a style that comes straight out of the comics, and it works for the overall presentation. The models could have been a teensy bit sharper though as the details don’t go further than skin deep. Slowdown pops up now and again, which is a bummer, but it’s tolerable. The music and voices make the comic book feel come full circle, and really helps to elevate the experience.

Marvel Ultimate Alliance 3: The Black Order is like a B-movie. You know that it isn't the best in areas, but you still enjoy it with all your heart. The characters are well crafted, which makes the game such a joy. The environments, voices, and the general feel is strong. Obviously, the camera issues and endless corridors can drag down moments of the fun, but the action keeps everything flowing and enjoyable. The action never stops, which is the ultimate strength of the title.

This sounds about what I expected: a fine game, but just that.

Given how the releases for the rest of year are shaping up for me, I hope to pick this up around the winter holidays. Hopefully, perhaps, at a slight discount.

I have other BS games in the coming months that I NEED to know with my own hands.

Maybe by the time I'm done with those, patches and DLC will put MUA3 at a significantly better place than at launch.