If only all dictators fell so easily.

Irony Curtain: From Matryoshka with Love is another entry in the point-and-click revival, this one taking place in the fictional state of Matryoshka, behind the Iron Curtain during the height of the Cold War. Developer Artifex Mundi crafted well-designed puzzles that pose the right amount of challenge without being frustrating, and crafted a story that’s funny without being toothless. It’s a polished, worthy entry in the point-and-click genre as well as a fun parody of the Cold War.

As with all point-and-click games, the writing is everything. Irony Curtain is a satirical Cold War spy story, starring an idealist young journalist who despite living with all the capitalist comforts has deeply internalized propaganda from the “socialist paradise” Matryoshka. Thinking he’s been invited to the hermit kingdom to interview the near-mythical “Leader,” he quickly finds this Communistic paradise is more of a dictatorial nightmare and that the actual reason for his invite is more spy-caper than Pulitzer-bait. 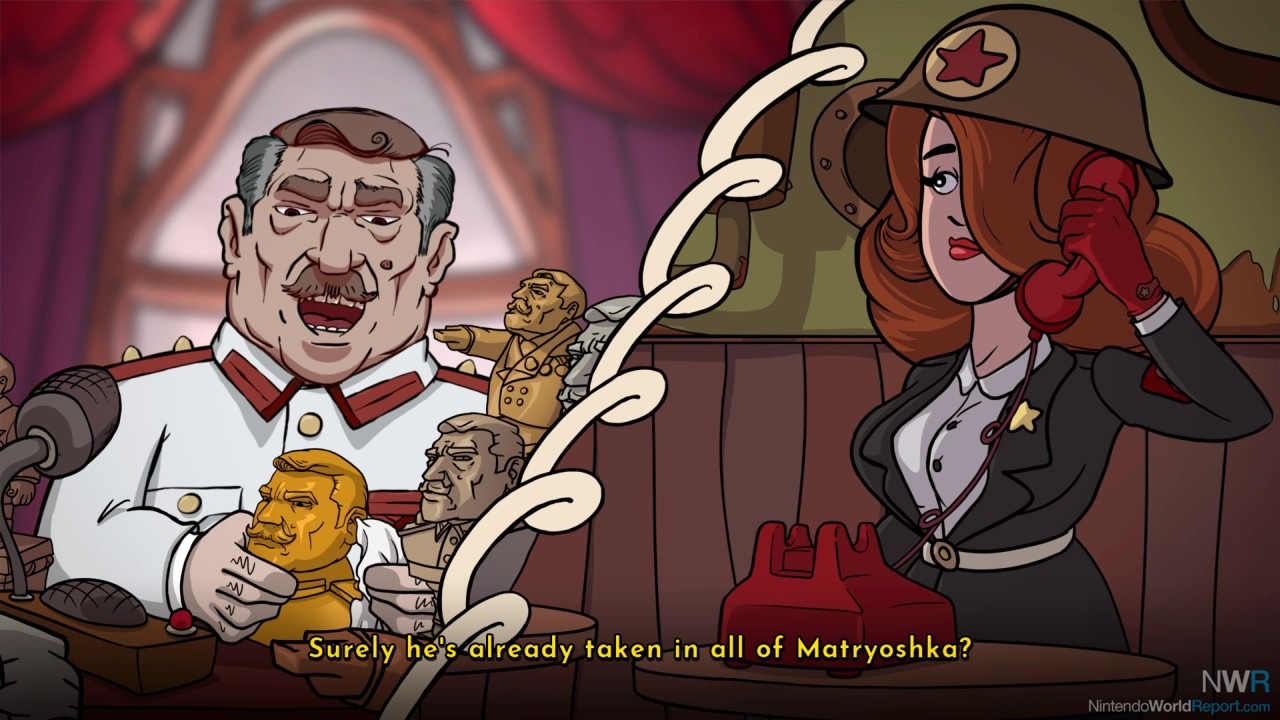 Matryoshka's leading industry is statues of the Leader.

It’s interesting to see how Polish developers, whose country struggled behind the Iron Curtain, managed to adopt and tweak the tropes of Western Cold War parodies. Matryoshka feels like a real place, with real problems, even if it is really only one step removed from Rocky and Bullwinkle's socialist paradise “Pottsylvania.” The cast of eccentric characters, range from a femme fatale who seems to be hiding something from everyone to a scheming intelligence minister with his eyes on the greater glory, to our innocent if misguided hero. Everyone is funny, and yet it’s easy to become invested in the development arcs of each character. I even grew concerned for the fate of Evan’s obnoxious minder, who consistently detains and impedes Evan, once he fell into the hands of the corrupt Intelligence Bureau.

All this humor is not without a message, there’s clear jabs at the suffering that came with living under the corruption of Soviet-style Eastern Bloc states. Hidden cameras are everywhere, people hoard ration tickets for supplies that don’t exist, and monumental construction projects “for the people” are actually little more than the shuffling of dirt. The story has the right mix of spy fiction comedy and commentary to produce interest in Evan’s capers, sell the overall message, and yet still create comedy. Evan’s stultifyingly slow realization that perhaps he didn’t have it all figured out is a great reminder that everyone has fallen victim to the self-delusion of youth. 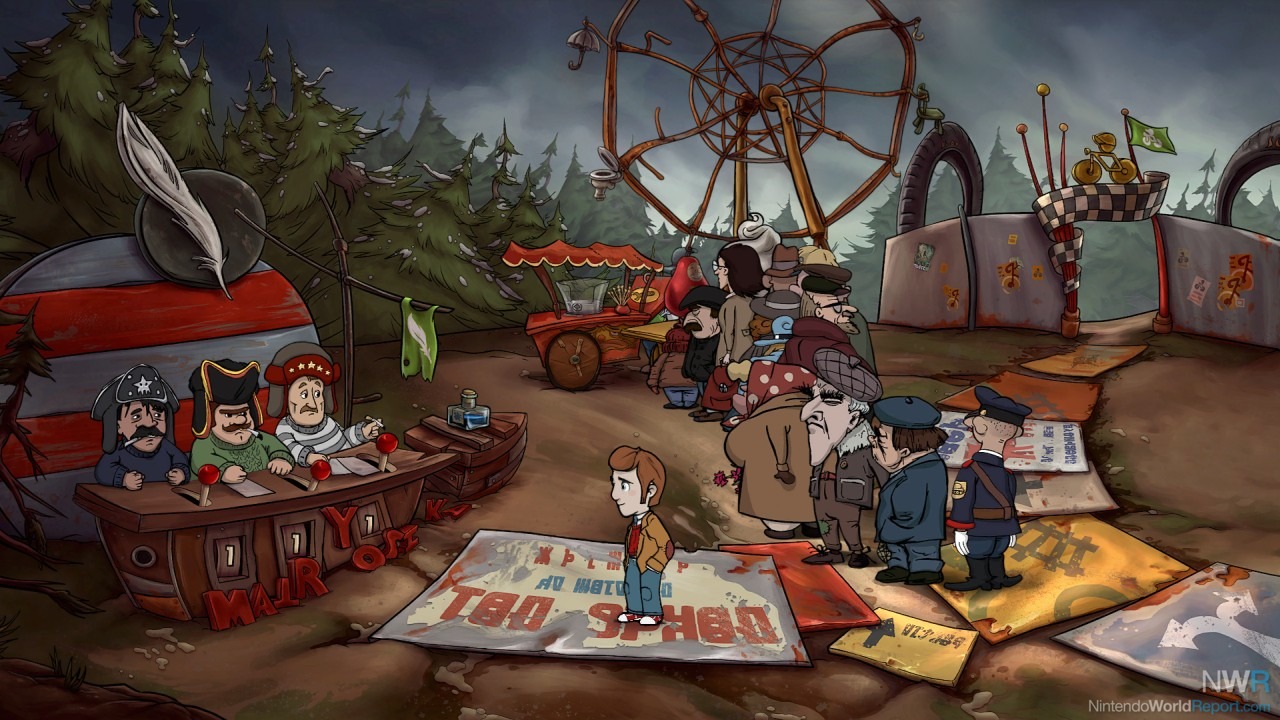 If you’ve played a point-and-click before, then there’s not a lot to explain here. It isn’t mechanically unique, nor does it present any great refinements on the style. What it does do, is create a lot of logical puzzles. It constrains the play area to make sure you’re not holding a thousand items you don’t need and you’re not scraping the entire game world to find the one item you’re missing. The “right” item needed to solve a puzzle almost always makes sense. The problems that need to be solved are effectively highlighted both literally (a button that highlights all interactable items) and through dialog. Irony Curtain has adopted the built-in hint system that have become common in modern point-and-clicks, and it is effective at delivering good hints. Over the seven hours, I only had to look up the solution to two puzzles. No puzzle will leave you stumped for too long, and so the game feels brisk without diminishing the satisfaction of solving the puzzles.

A handful of minigames manage to sell the bureaucratic nightmare that is Matryoshka. Multiple challenges deal with arcane paperwork stamping procedures to authorizing mundane tasks like using the toilet or checking into a hotel. The celebration of the Leader party involves a contest to glorify the worker like an endless runner bricklaying minigame and “shoot the capitalist targets.”

One of the few frustrations I had with the game was that moving Evan around at times felt difficult. Adapting a point-and-click game to controllers is always a challenge but overall they did a good job. Sometimes he gets hung on items in the world, or interacts with the wrong object. Some of the button mapping choices are a little strange, and it would be nice if I didn’t have to hold the button to keep open my item menu. These are all minor concerns, but they stand out in an otherwise polished game. 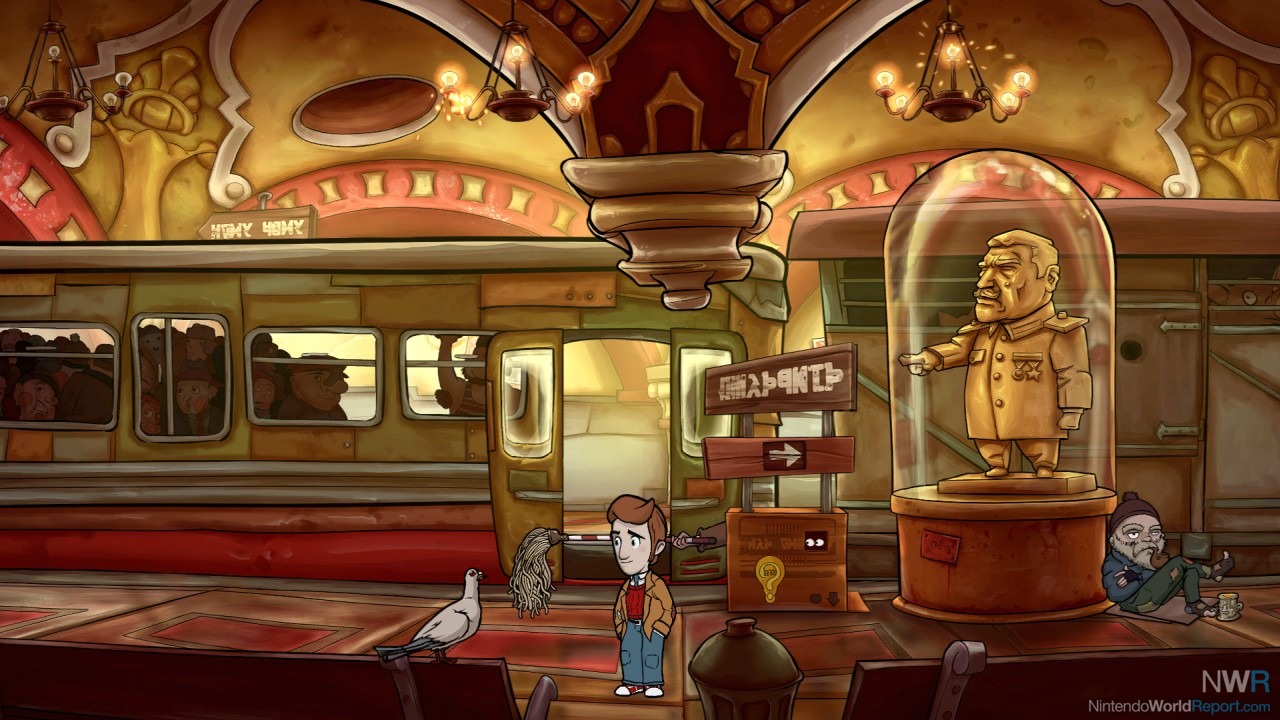 Get on the train, Evan!

The cartoon style was a good choice, hearkening back to Boris and Natasha, but with a much richer color pallet. The liberal use of Soviet Red was greatly appreciated. The characters all look unique and their primary personality traits are reinforced through strong visual design.

Artifex Mundi created a fun, brisk, and engaging point-and-click. They leveraged the right balance of humor and storytelling, characters and circumstances. While clearly a throwback, they put enough of their own spin on the various formulas they leveraged to make something that feels familiar but still unique. For fans of point-and-click games, Irony Curtain is a sure thing. For people inexperienced with the genre it’s a friendly starting point.