Climbing that tree as a kid would have been way easier if I could just walk up it.

Etherborn’s developers have a habit of describing their game as “Monument Valley meets GRIS,” and this is a very apt comparison. Monument Valley is a mobile game about navigating structures based on the impossible geometric artwork of M.C. Escher, while GRIS is a side scrolling, artistic puzzle platformer. Etherborn seeks to combine Monument’s geometry with GRIS’ platforming while also bringing it into 3D space, creating an entirely unique puzzle platformer with an identity all its own. 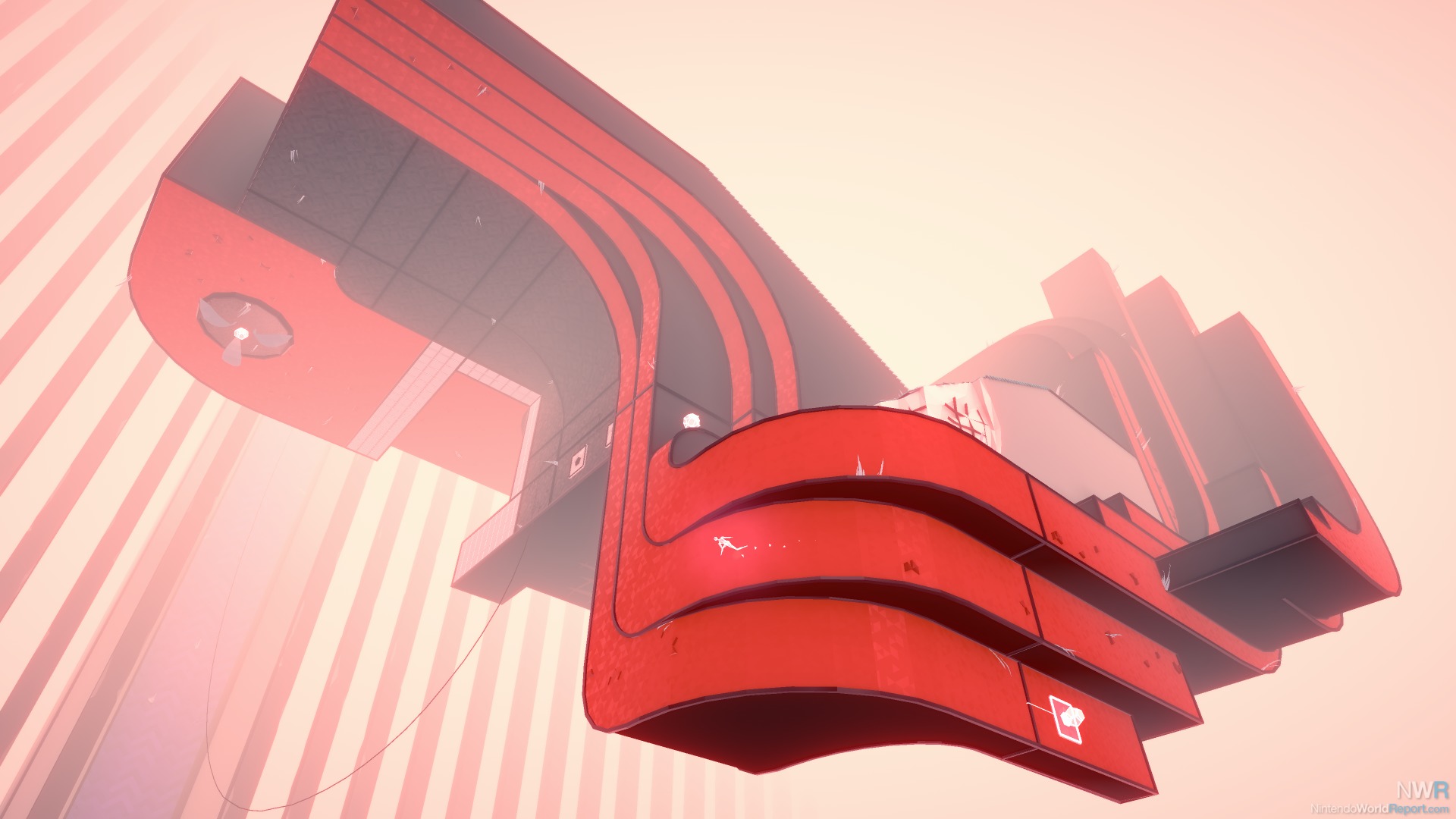 The narrative side of Etherborn is largely inconsequential, with a narrator telling you the story of humankind’s development between each world. You play as a human who appears to have transparent skin showing the skeleton or neurological system within, colored in bright red. This being is attempting to climb what the game refers to as “The Endless Tree,” which serves as the level hub. As you climb its twisting branches you will find portals to various other worlds where the puzzle solving begins. Once you have completed the puzzles of that world, you are treated to more narration, and the path to the next world is opened.

As stated earlier, Etherborn is a 3D puzzle platformer that involves navigating impossible geometry and manipulating gravity. When walking on a surface, any curved corner or space will allow you to walk up or around the side of a wall. In this way, gravity only affects you when jumping or walking over a straight edge (think Mario Galaxy, as we add yet another game to the list). Your goal is to navigate this architecture and collect orb-like objects that can be deposited in receptacles around the level. Activating these receptacles will change the level in some way, opening up navigation to other areas. The orbs can also be removed if you feel you have put them in the wrong spot or need to transport them to a different switch, and sometimes a puzzle will require you to do so.

Unfortunately, Etherborn runs into its greatest problems when you are trying to navigate its world. The first is that your default walking speed is incredibly slow, which is mostly mitigated by the existence of a button you can hold to run. However, running makes your character control very loosely, which more than once caused me to careen off the side of a level accidentally while trying to take corners or sometimes even just trying to walk in a straight line. The character’s jump can also feel a bit stiff, at times like you’re not actually conserving any of the momentum when airborne. This wasn’t a problem at first, but eventually the game began to expect me to make precision jumps that only worked if I launched at the very edge of the platform I was standing on. It never breaks the game entirely, but jumping in Etherborn just doesn’t feel natural, which is not something you normally want to be able to say about a platformer.

What hurts Etherborn’s navigation puzzles more than anything, however, is the camera. In Monument Valley, the impossible geometry that makes up the levels is simple to navigate. You can always see where you are in the level, and navigation is relatively simple as you can see the entire level at all times, allowing you to think through a solution from start to finish before trying to execute it. Etherborn’s nature as a 3D game makes this impossible, and unfortunately this works to the game’s detriment. It is very easy to lose track of where you are in relation to the level in Etherborn, and the camera just doesn’t help all that much. You can move the camera in any direction but only to a certain extent, and even when pressing a button to zoom out, these movement limits are still present. Allowing the player to circle around the entire level while zoomed out would alleviate these problems greatly and allow them to formulate a solution in their head before executing, but as it is Etherborn becomes a game of blindly walking around corners hoping that path might lead you to where you need to be.

Overall, Etherborn has its charms: a calming dynamic soundtrack, a smooth and simple art style, and a captivating performance by its narrator. But these are overshadowed by the thin layer of frustration caused by the loose controls and overly restrictive camera. There is potential here and if you enjoy more artful puzzle games like the ones this game has been heavily compared to, it’s at least worth a look. Just be ready for a few hangups along the way that might take you out of the experience.