The Bandicoot crashes onto Switch with a great racing game marred by a sloppy port.

When Mario Kart cracked the code on mascot racing games, a wealth of other challengers popped up over the years across multiple companies and systems. At this point, most of them have faded away, but one of the few that stayed more firmly in memory was the 1999 Naughty Dog-developed racer Crash Team Racing, which was the closest the PlayStation had to a Mario Kart game. Back in the day, Crash Team Racing was great. While derivative in spots, it had awesome mechanics, decent level design, and an expansive Diddy Kong Racing-esque Adventure mode. Now on Nintendo platforms for the first time, Activision and Beenox have remade Crash Team Racing for the modern era, even throwing in the races from the sequel Crash Nitro Kart for good measure. Aside from a terse difficulty curve and a frustrating port to Switch, Crash Team Racing Nitro-Fueled lives up to the original’s legacy and then some.

The similarities between other kart racers is apparent, but Nitro-Fueled does a lot of things just different enough to be hard to adjust to if you’ve been playing a ton of Mario Kart 8 Deluxe. Drifting involves pressing a shoulder button to hop and lean into a turn, and then tapping the opposite shoulder button in good rhythm to boost. It’s finicky, but reminds me of how mini turbos used to work in old Mario Kart games. The boosting is the biggest departure, as a lot of other elements are familiar, including timing hops at the end of ramps to trigger a boost when you land. Items all have familiar parallels in the Mario Kart milieu, including the Warp Orb that is basically just the blue shell but it’s a crackling ball of magic. Some items have unique twists, such as a shield that can be optionally shot forward as a projectile. 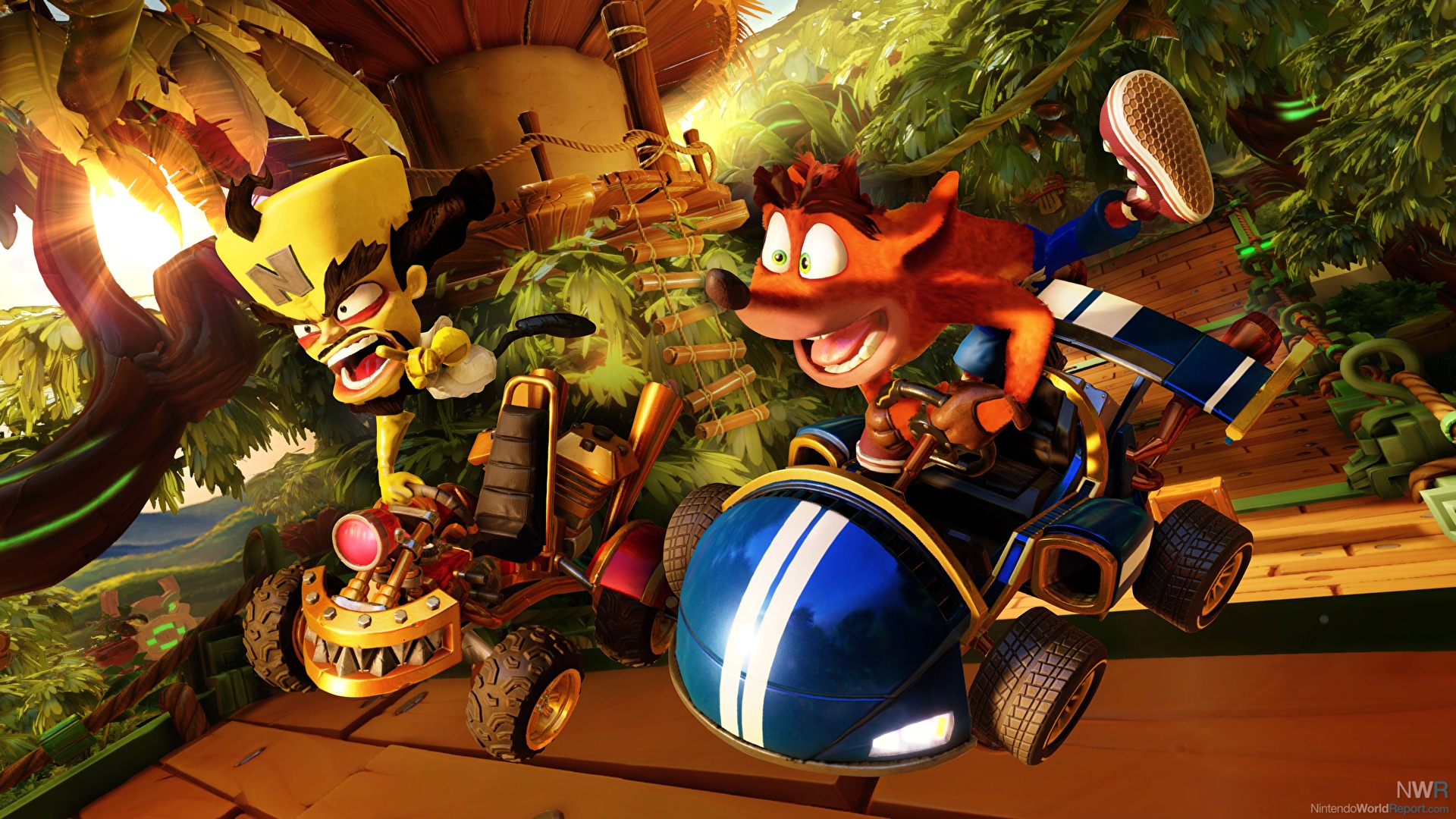 The core of the experience is the Adventure, which lets you choose between the original Classic mode and the new Nitro-Fueled mode. Classic is the quest as it roughly was in 1999, while Nitro-Fueled lets you choose characters freely and customize your kart. It’s great that the option is there, and while Nitro-Fueled does add a difficulty option, the overall curve is ridiculous. The original release was tough, and for better or worse, this replicates that feeling. To progress in Adventure mode, you have to not just complete races, but finish in first place. Primarily due to crazy rubberbanding that would make a Mario Kart blue shell blush, most of my experience on Medium difficulty required near perfect races to win. It’s much more palatable to learn the ropes in Easy difficulty, but when you start Adventure mode, you’re locked to a difficulty setting, so if you want to make it easier or harder, you have to start over.

I enjoy the challenge of winning races in Adventure mode, but even still, early on you’re railroaded into very few options to progress. If you can will yourself to the second world, it’s a much more enjoyable experience as multiple tracks and challenges open up. On Switch, the repeated replays become a burden because the load times are incredibly long. Waiting for a race to load can take between 30 and 60 seconds and even retrying a race creeps up to double-digit seconds sometimes. Oftentimes the length of a load will be nearly half of the length of the entire race. Lastly, while the game is totally fine in docked mode, the graphics are washed out and unspectacular on the go. At least the framerate is consistent through all of this, which is admirable.

Adventure mode includes a variety of race types, including CTR Challenges that require collecting hidden C, T, and R letters, unique time trial levels that involve racing fast while trying to collect crates that freeze time, and the open arena Crystal Challenges where you have to frantically find all the crystals before time runs out. While these modes on their own might wear thin, combined they’re awesome. In particular, the CTR races encourage you to find secret paths and areas that rekindle the glory of finding the SKATE letters in Tony Hawk games. Of course, Nitro-Fueled throws in the more traditional Cups available outside of Adventure as well as the multiplayer battle modes that range from traditional combat battles to variations on capture the flag. 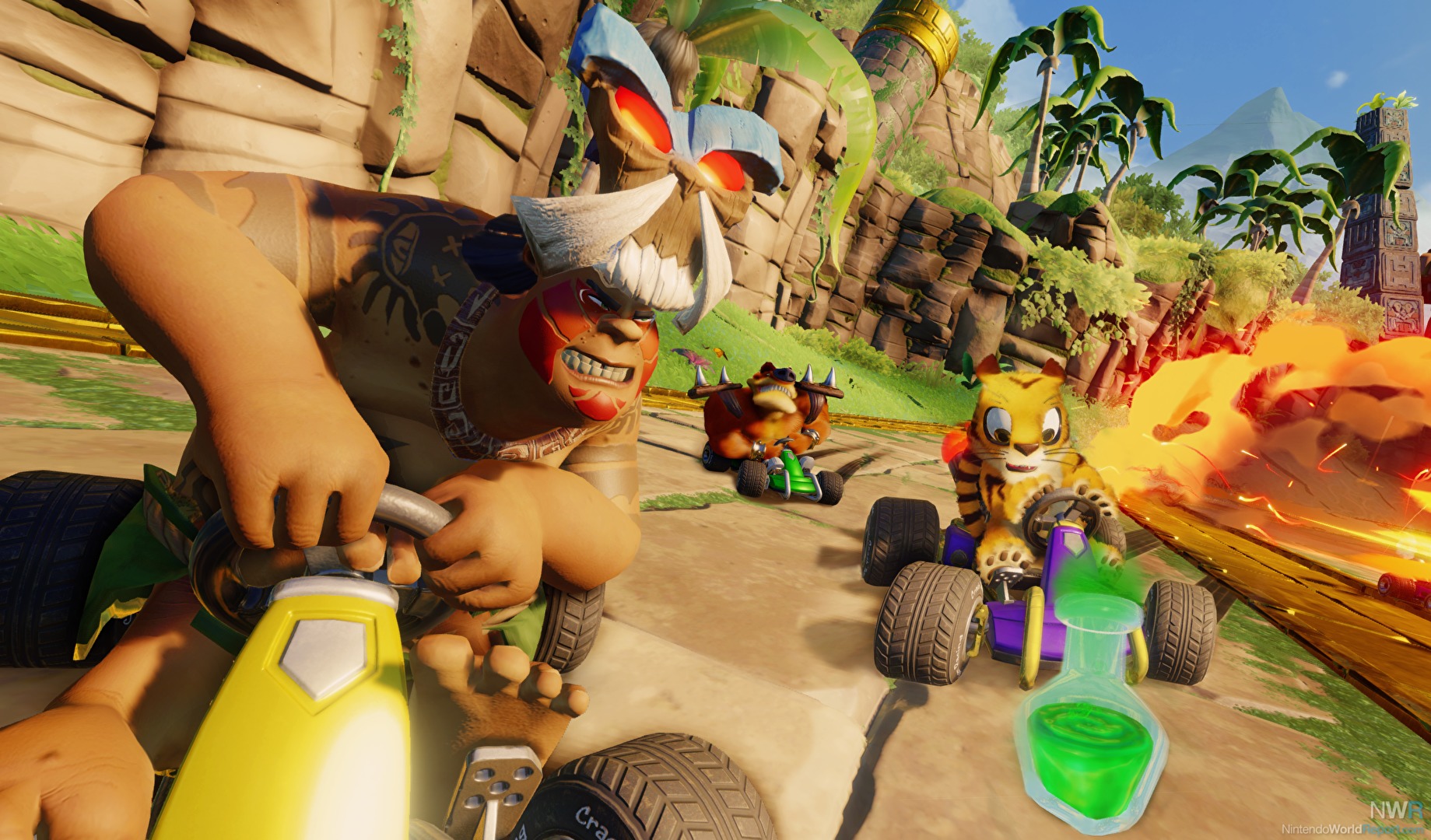 Online multiplayer lets you try all these race types over the internet, though the online hasn’t been the swiftest experience so far. Collision has been inconsistent and the races occasionally broke down into slideshows. The one promising aspect of the online experience is the Grand Prix content being introduced starting in July, which will add new races and characters for free, building up to Spyro joining the races later in the year. Honestly I can’t say whether the online multiplayer is something I’ll go back to after the review, but I’m excited for the promise of more free content at the very least.

One of the major new additions to the Nitro-Fueled version is the cosmetic customization aspect. No real money can be used, but in-game currency is earned through play that can be used to buy new character skins, karts, and more. As someone who lacks a passion for Crash Bandicoot lore, a lot of the allure of the skins and karts is absent, but being able to regularly unlock new doodads is nice, even if most of them are stickers for your karts.

While the roughshod nature of the Switch port doesn’t quite make Crash Team Racing a dominant kart racer on the system, the solid single-player mode and finicky yet rewarding boosting and driving still adds up to an enjoyable time, as long as you’re fine with a visual downgrade and a long wait between races. I really enjoyed revisiting Crash Team Racing with Nitro-Fueled and it reminded me of how great the single-player component of this game is. I just wish there weren’t such large caveats that held it back on Switch.

I think 7 is a fair score, although I wouldn’t call this a “sloppy port.” Granted, I have never played the original, but the visuals pop nicely, the framerate is a steady 30fps from what I’ve seen, including in multiplayer, and the game is a blast. The port seems quite serviceable to my novice eyes.