Contra-ry to popular belief, too much of a good thing can be pretty good.

The third of Konami’s recent compilations brings together 10 titles in the run-and-gun Contra series. Despite, or possibly because of, their difficulty, Contra became a household name in the late 80s and early 90s at the height of its popularity, and it is this period that the Contra Anniversary Collection focuses on. Co-op play, weapon power-ups, and plentiful bosses can be found throughout the Collection, and I’m happy to report the Konami code, among others, is still alive and well. And you’re probably still going to need it.

Because all 10 Contra games are quite similar, it’s worth running through their general structure and gameplay. Levels alternate between side-scrolling segments where you run from left to right—shooting enemies, avoid bullets, and taking down bosses—and top-down or pseudo-3D segments that throw similar obstacles at you from a new point of view. You can pick up weapon upgrades such as the famous Spread Gun and Flame Thrower, and these often make bosses a cake walk, but you lose them upon death, so keeping a weapon throughout a given stage is the real trick. One hit from anything will kill you, so you have to be patient, skilled, and cautious as you mow down your foes.

1987 and 1988 saw the Arcade releases of Contra and Super Contra, respectively. While both games are more visually appealing than their NES counterparts, they only take up about the middle third of the screen, so everything feels a little more condensed. Making up for this in a small way is that the action proceeds a little more slowly. Given that these are arcade games, they don’t have any cheat codes, but you can choose from four difficulty options before booting them up, and of course you can give yourself as many credits as you like before actually heading into the first stage. Even better is that when you lose all your lives, continuing from that point puts you right back to where you died. Contra and Super Contra are still very much playable today, with the only real issue being their restricted screen size. The Arcade Classics Anniversary Collection eventually got an update for TATE mode, but as of posting this review the arcade Contra titles are not playable with this vertical orientation. 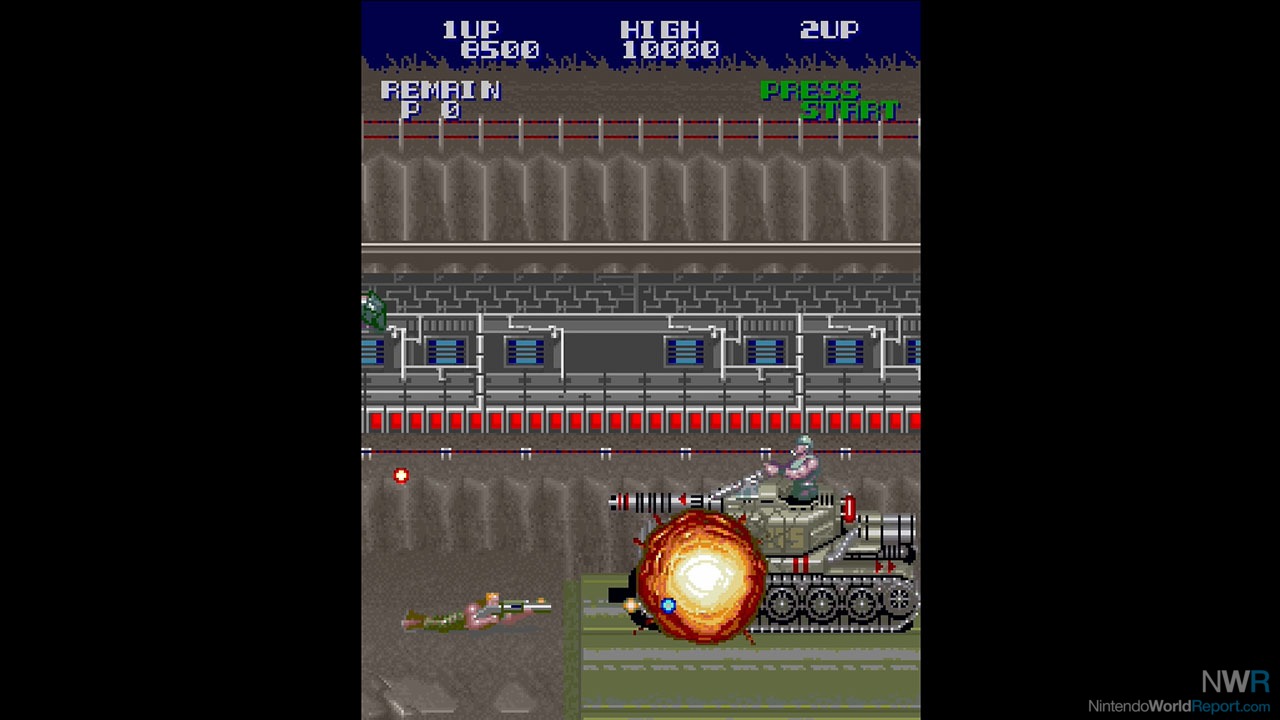 The Collection includes three games across the NES/Famicom platforms: Contra (NA), Contra (JP), and Super C. The two console versions of Contra are almost the same as the arcade version, but without the same screen restriction. They also have slightly longer stages and differ graphically. There are a few differences between the North American and Japanese versions that are also worth noting. Put simply, the Japanese version is much better. It has cut-scenes (in Japanese), extra in-game animations, and an animated map screen not unlike the one used in Ghosts N’ Goblins. Super C, on the other hand, differs more significantly from arcade Super Contra, on which it is based. It has three unique stages and a new final boss, and of course it has the NES’ 8-bit graphics. The inclusion of two NES versions of Contra is a little surprising given the superiority of the Famicom version, but this is one of the major issues with the Collection: half of the titles are similar or almost the same as the other half. 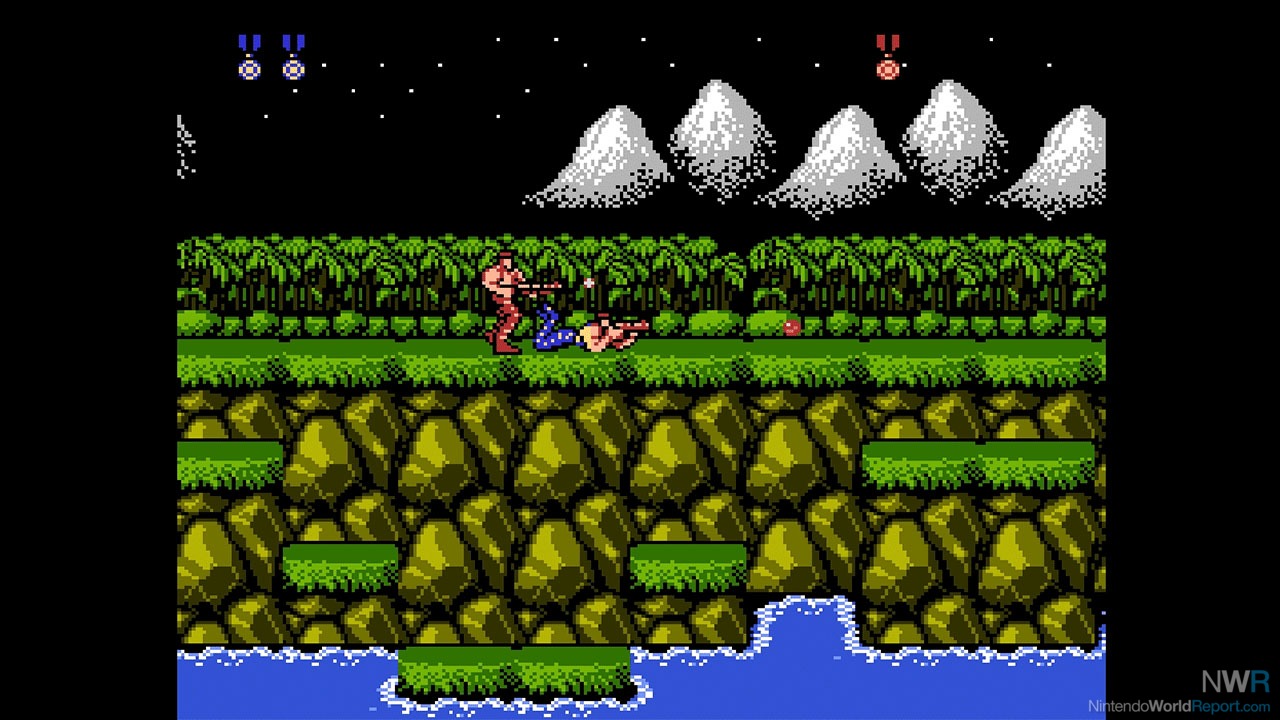 Operation C is the lone Game Boy entry in the Collection, even though it wasn’t the only Contra game on that platform. As we’ve seen with the two such games in Konami’s Castlevania Anniversary Collection, Game Boy titles look surprisingly great on the Switch, and Operation C is no exception. The game consists of only five stages, which are heavily inspired by those from Super C, but the gameplay is fun and tight, very much comparable to the home versions of Contra. Having never played it when it first released, I was really impressed with Operation C, and I probably would have loved it as a child. The music of Contra is also pretty faithfully recreated here, but of course it doesn’t have the co-op of every other title on offer in the bundle.

The SNES and Genesis/Mega Drive games

The last four titles in the package are essentially only two games: Contra III: The Alien Wars and Contra Hard Corps. The two other titles, Super Probotector Alien Rebels and Probotector, respectively, are just PAL versions that change human characters into robots and alter certain story elements. The gameplay is basically the same across each pair. For what it’s worth, another difference is that the PAL games give you the option of playing in the original 50Hz or what they call “Turbo” 60Hz. 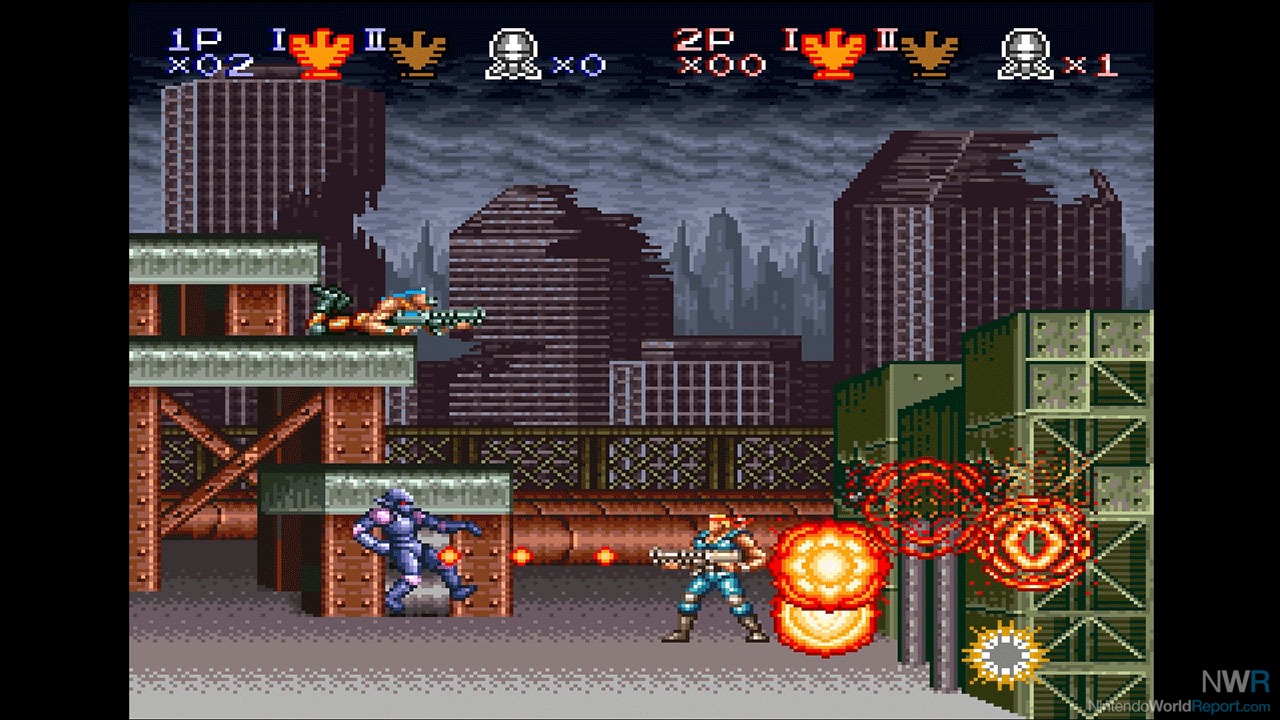 That said, Contra III was one of the stand out action games on Switch, and it plays just as well here as it did on the original SNES in 1992 (It also showed up on SNES Classic). It adds climbing mechanics, screen-clearing bombs, and the ability to carry two different guns at the same time. You can even press both shoulder buttons simultaneous to jump up and down while firing both guns all around the screen. Contra Hard Corps released in 1994 on the Sega Genesis and was the first Contra game on that platform. It introduces some really neat elements to the series in the form of different playable characters that each have their own characteristics and weapons. Even more interesting is the addition of branching paths that can alter the ending of the game. Because of this, it’s a shame there’s only one save state you can use or else you could create multiple saves at the different forks in the story.

It goes without saying that hardcore fans of the Contra series will love having five different games and may even appreciate the version differences in the other five games. There’s also a Bonus Book here that contains interviews, artwork, and other historical documents, including an official timeline and a brief summary of Contra weapons. Konami recently added in six more Japanese versions, too. Nonetheless, it would have been nice to see a spinoff like Contra Force or even Contra: The Alien Wars for Game Boy rather than the incredibly similar PAL versions we did get. Button remapping is another frustrating omission. Overall, this is a solid collection of classic action games that have enjoyable boss fights and provide a great challenge, but it doesn’t feel like a definitive compilation.