This game has an AI named Ronald Reagan. I don’t know what else you want from me.

I’m a mark for mecha anime. It’s even worse than you might get from my public persona; I will consume absolute mecha trash. I will hate it. I will rant about it. But I’ll still consume it. Don’t believe me? I watched all 50 episodes of Gundam SEED Destiny, I have a problem. Those of you aghast at the previous thought should pay attention, because Project Nimbus isn’t “mecha trash,” but it does have a mix of repetitive missions, unwieldy movement, a derivative story, and at times goofy presentation. It almost manages to get away with it. 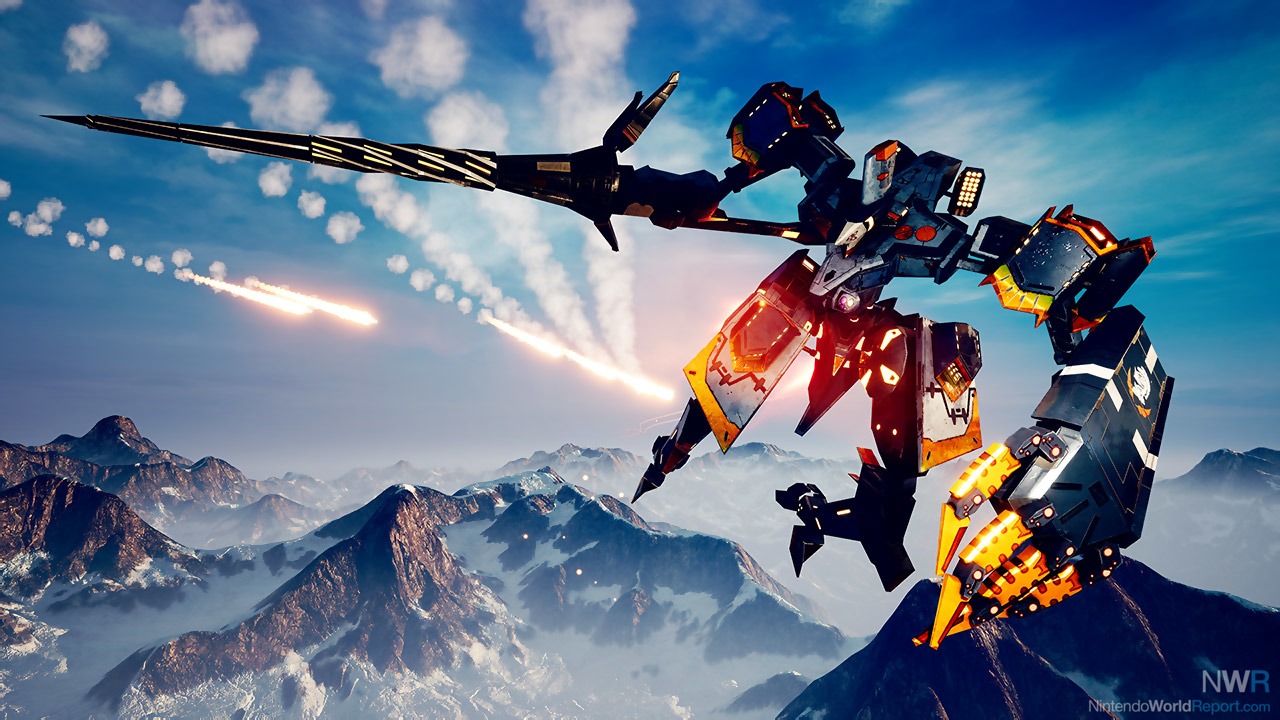 Project Nimbus puts you at the controls of hulking Battle Frames on opposing sides of two superpowers exhausted by a planet-decimating war, at the exact moment the fragile peace is shattered by a conspiracy. You play as various members of a fairly bone-standard anime cast as they lilt about the futility of war while their outrageously overpowered Battle Frames decimate a swarm of vastly outclassed peions. It’s pretty standard stuff.

Taking the reins of an overpowered mecha should be the most satisfying experience. Sadly, this game isn’t particularly fun to play. It’s true the Battle Frames are clearly overpowered, but because the story has you bouncing between three or four different people, each with vastly different weapons, there’s neither a feeling of consistency or progression. Sometimes you’ve got a tool of decimation and others a pea shooter. At one point in the campaign you’re having to learn a new Battle Frame nearly every other mission.

The combat is serviceable but often feels “off.” Because the game has you moving in large spherical mission spaces, boosting is the only way to get around them quickly. However, boosting simply jolts you in the direction you’re pointing the stick, and momentum keeps firing in that direction for a second or more, even after you release the boost. I’m struggling to think of a more precise word, but the game’s momentum creates a sensation that I can only describe as “floaty.” It’s difficult to get exactly where you want to be quickly. This means you often overshoot the encounter you’re going towards, and this is a big issue because the lock-on system only locks onto enemies in your line of vision and in close proximity. 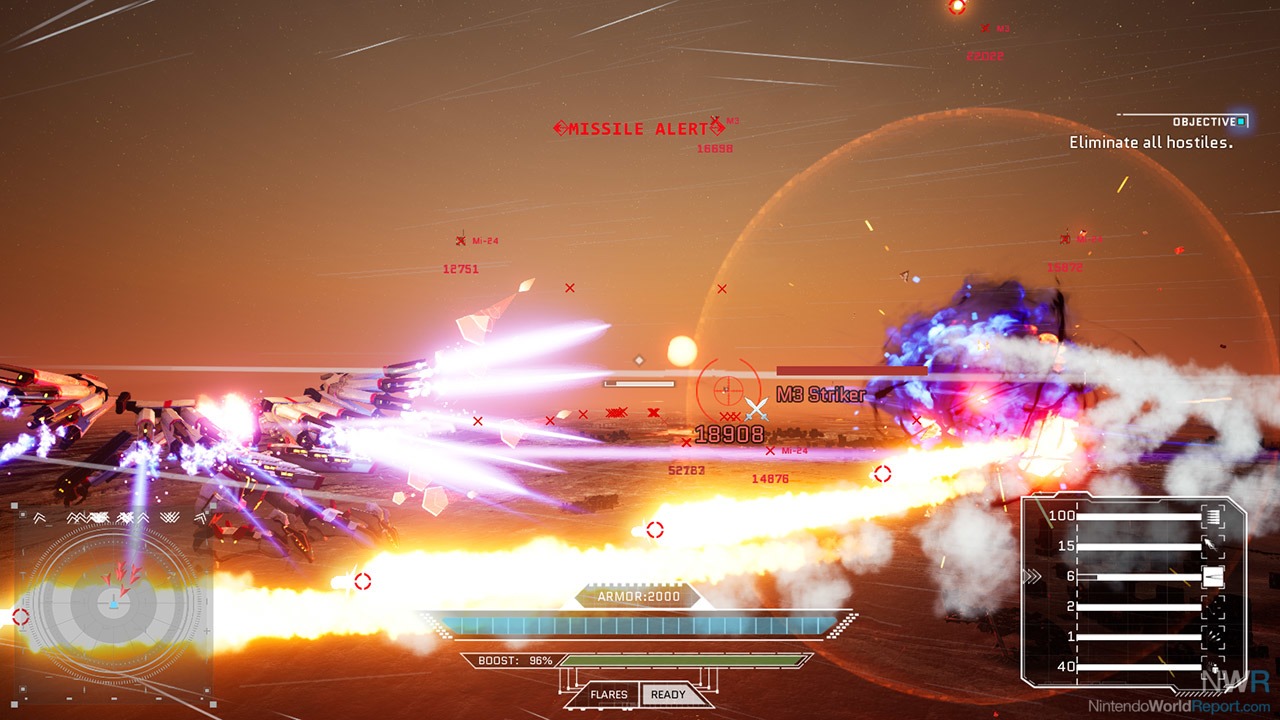 If you lose sight of the enemy or get too far the lock is broken and can’t be reestablished until you fix it. This means constantly losing sight of enemies you fired homing weapons at, not knowing if you finished them off or if you need to hunt them back down. The final encounter is especially frustrating, as it’s almost impossible to maintain lock on its moving weak spots, but the lock-on system is a near-constant frustration throughout the game. It’s especially baffling since the game is third person (by default) and lets you maintain lock as long as the camera is pointed at the target, and is not impacted by the direction of the Battle Frame. Just letting me maintain lock would be a big improvement, but having the camera stay focused on my target and even having the Battle Frame’s movement tied to it would improve the feel immeasurably.

Most missions are “destroy all hostiles,” which is a huge grind because you’re often outnumbered 50 or even 100 to one. It turns into hunting down a lock, firing until you run out of ammo, swapping weapon, and repeating the process. Without the satisfaction of shredding foes, it gets old quick. Other missions have you taking down big targets on a timer or escorting VIPs. It’s not bad, although there’s a particular escort mission that is just not enjoyable. Ultimately the missions aren’t captivating, they’re just too similar. At no point when I wasn’t playing did I think “I should go play Project Nimbus.” That said, I only quit in frustration a couple of times, and I was usually willing and able to stretch a session to an hour or more. But, at it’s best, I was only having a little fun. 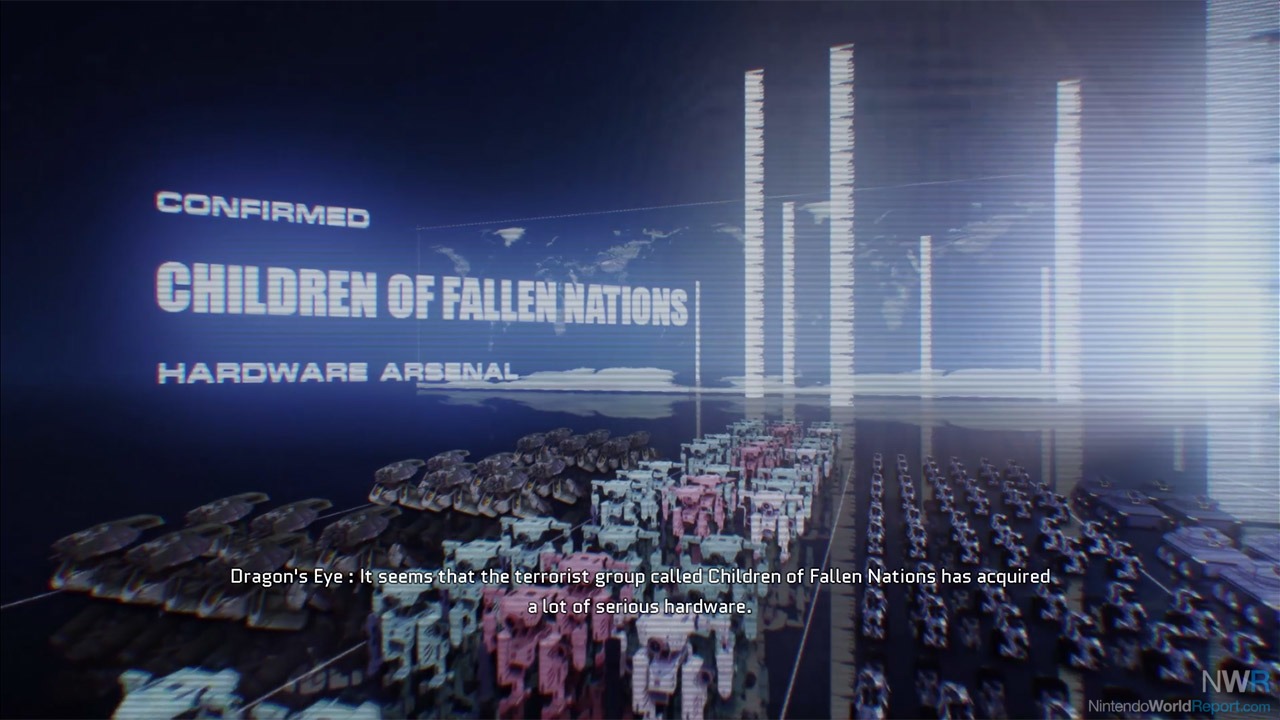 For the plot, there’s nothing here that hasn’t been done before, and better. If you’re even remotely up on your Gundam lore, you’re going to be filling in the blanks here - they get into mecha-facilitated transhumanism as a conduit to mutual understanding and even have the audacity to drop a space station on Sydney. A lot of the plot is delivered either between missions in cutscenes or in mission via the radio. Backstory is provided in Metal Gear Solid-style audio logs you can listen to between missions. It’s hard to say if the content was under or over ambitious. There’s a bunch of threads that are spun up but without the care necessary to create interest. The grand conspiracy isn’t really explored, and literal deus ex machina are created only to be summarily destroyed in the subsequent mission. Regardless, even if the plot were creative it’s just not delivered well. I took particular glee at the bad Russian accents and at-times just goofy dialog. There isn’t even consistent pronunciation of the game’s own proper nouns between characters.

The design looks a little muddy, the textures often seem low detailed and sometimes don’t load in right away. That said, it runs well. Considering how much stuff is on screen and how fast you’re moving, that is impressive. However, it’s just not much to look at. The character art, which is sadly only shown off during cutscenes, can be very nice. There are moments where 2D drawings are placed in 3D environments, and those look silly. The mecha designs are solid - although a discerning eye will spot some “familiar” design queues. The music stands up though, it’s really well done.

A couple of modes are available beyond the main story, but both are variations on the “kill all enemies.” Warfront gives you missions to complete and lets you unlock actual progression and customization options. These would have been welcome in the main game, but ultimately I didn’t find their addition enough to really keep my interest in the mode. The other mode is survival, where you can pick to fly various mecha - most of which you otherwise never control. It’s fine, but by the end of the story mode I’d had enough of killing wave after wave of enemies.

Project Nimbus isn’t bad, it does too many things competently to deserve such a label. And it isn’t utterly bereft of fun; at times I was enjoying zipping around the battlefield launching autonomous drones to hunt down targets. However, the core gameplay loop just doesn’t sustain any feeling of satisfaction. If I felt like I was in better control, the combat might be enough to keep me going in spite of everything else. If the mission structure added more to the experience, I’d be better able to overlook some of the issues with the mecha control. If the plot brought a more engrossing and better delivered story I could look past some of the issues with the gameplay. However, I can’t. I won’t say there’s no reason to play it; if you’re a fan of giant robots with anime teens crying over the futility of war while killing hundreds in order to stop planetary-scale annihilation there’s still something here. I just can’t promise you’re going to feel like it was the best use of your time.

Props to small Thailand dev making it to the big time!

I watched some footage way back when Austin Walker of The Video Game website Formerly Known As Waypoint played some of the Steam version of this game. What I saw lines up with this review.

Maybe I will pick this game up someday, but Daemon X Machina gives me a mech lab to tinker with from the start. Mech labs are what I live for in a mech game.