A Flock of Birds Enter the Switch eShop with Guns Blazing.

If the thought of birds taking up arms has never crossed your mind, you’re not alone. Blazing Beaks is a strange combination that works surprisingly well, both in concept and in execution. Blazing Beaks is a twin-stick shooter featuring our avian friends, who now have access to some of the deadliest weapons ever made. Regardless of your feelings on roguelike and roguelite games, Blazing Beaks is one title you don't want to overlook. 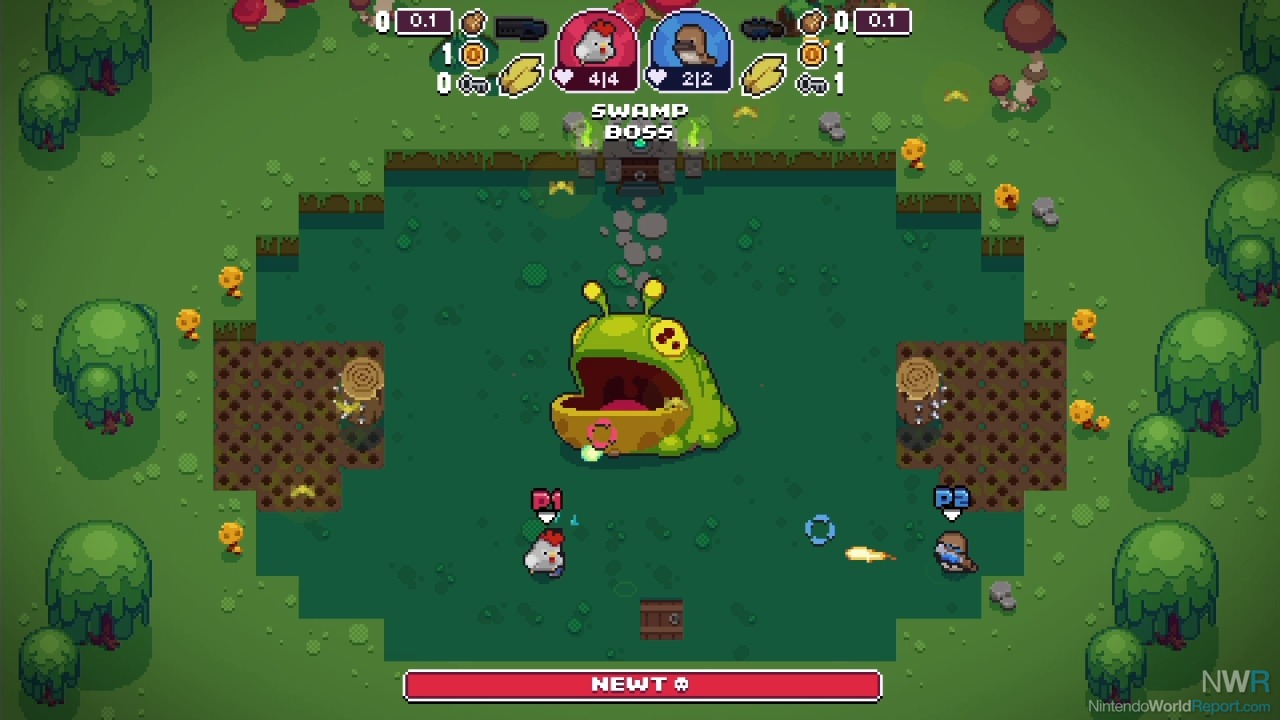 Using the left stick, the player can control the character’s movements, while the right stick can be used to aim the reticle displayed. The twin-stick setup can take a while to adjust to depending on your experience. As well, there is no tutorial upon starting the game, only a basic room allowing the player to experiment with the control style. Veterans of the genre should have no issue adapting to the control scheme, but newcomers may experience a steep learning curve. Fortunately, controls can be tweaked and buttons can be remapped in the menu at any time, which is much appreciated. In terms of presentation, the game has a bright and colorful aesthetic. Even though many feel that the pixelated style has become too common, it works very well in this game. Each character, enemy, and obstacle is gorgeously crafted to stand out in the environment, which also makes them easier to interact with in the world. The music is nothing special, but fits each different battle scenario pretty well.

There are eight different playable characters, each having their own unique weapons, amount of health, and abilities. The chicken, for example, has a long-range gun that can kill any marked enemy in one hit; however, the accuracy of its weapons significantly decreases while running. On the other hand, for a riskier experience, the platypus starts each playthrough with a key and can gain extra loot by killing specially marked enemies, but it only has two hit points. Every character feels significantly different from the others, creating a unique experience depending on which one you use. 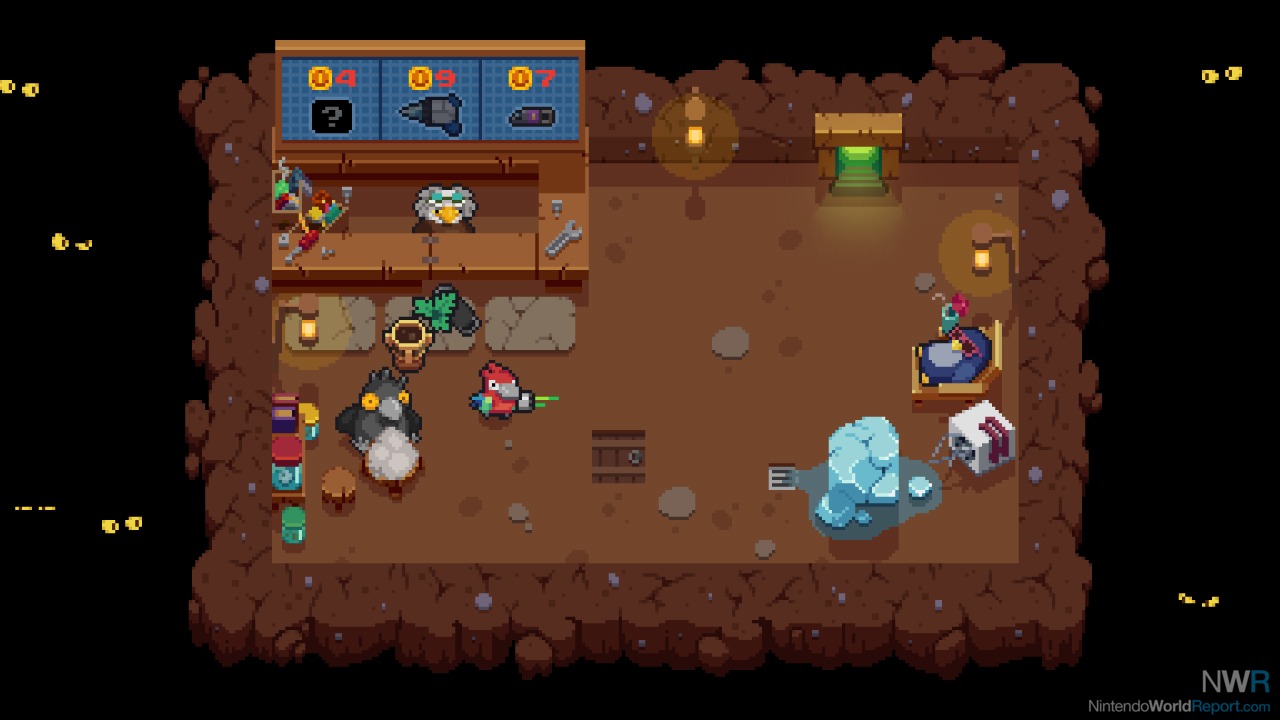 As for the gameplay, there are two different modes to choose from. In story mode, the player is dropped into a room filled with enemies. In order to proceed through the shut door, every enemy in the room must be killed. Upon defeat, enemies can drop extra hearts, artefacts, or coins that can be used in a shop. The artefacts are what makes Blazing Beaks stand out when compared to similar games in the genre. Each artefact can be sold to a vendor at the shop for a high price, but holding onto them gives the player debuffs until they are sold. These debuffs can range from enemies not dropping gold or hearts, to decreasing weapon damage or accuracy. This presents the player with a unique risk-reward scenario that can make each playthrough feel unique. Story Mode can also be played in co-op, with unique artefacts and treasure to be collected.

At the end of each world, there is a boss fight against a large enemy that must be defeated in a specific way. The first boss, Newt, requires the player to run behind spiked posts in order to have the boss attack the post to expose its weak spot. Each boss requires a unique strategy, leaving no two bosses feeling the same. All of the levels are also randomly generated, as you would expect from a roguelike. However, progress does not carry over between playthroughs, leaving skill and experience as the only things you'll take to the next run. 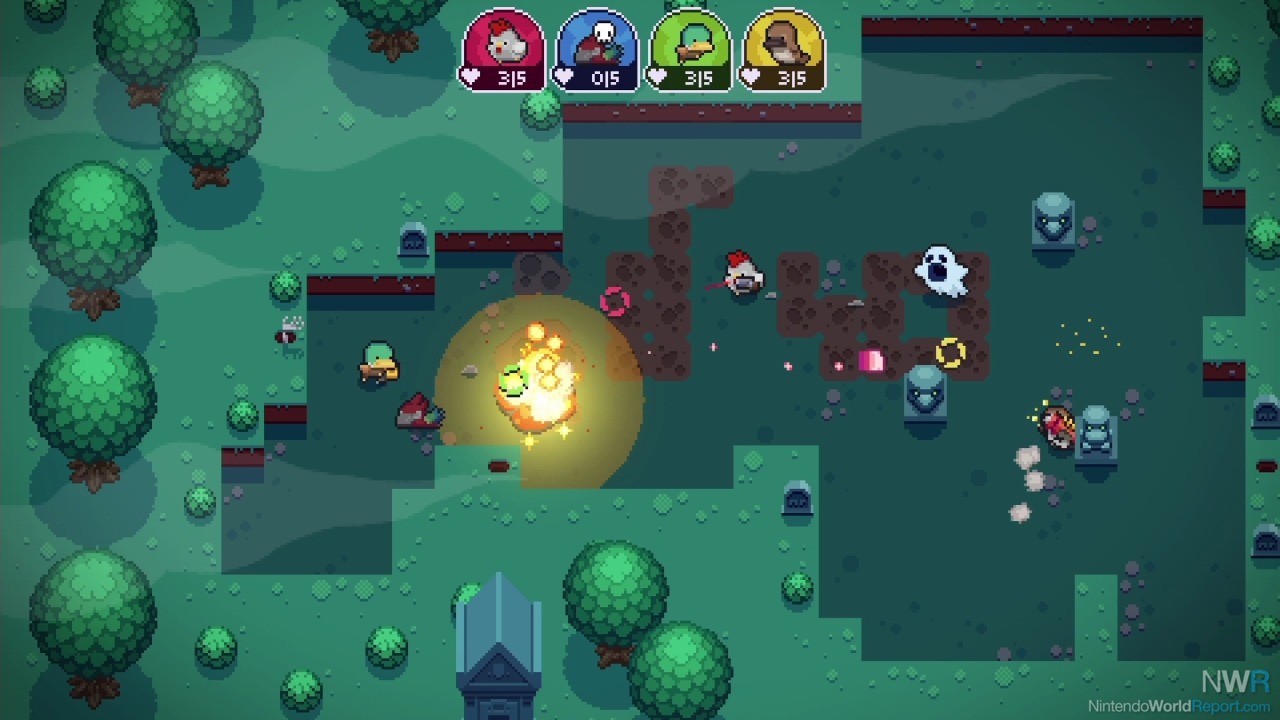 The second mode, Tournament Mode, is a competitive arena where you and your friends can battle to the death. There are five different types of tournaments that change up the dynamics of battle. In Skull Keeper mode, the player must hold onto a golden skull in order to inflict damage on an opponent, whereas in Drop Hearts mode, the player drops a heart when damaged that can be picked up by either the opponents or themselves. By far the most enjoyable mode is Hunting mode. In Hunting mode, there are no weapons except for a spear assigned to each player. Each time the player throws the spear, it must be picked up before being used again. This leads to a unique challenge of trying to be accurate while on the offensive, yet also playing defensively to avoid incoming attacks. Up to four players can play simultaneously in Tournament mode, but it is a shame there is no online option, since a minimum of two players is always required.

Blazing Beaks is one of the Switch’s hidden eShop gems. Regardless of the potentially steep learning curve, the game always leads to lots of laughs. It’s best played with a group of friends to get the most enjoyment out of all the content that the game has to offer. If Blazing Beaks even remotely catches your eye, it is well worth a purchase.