A mystery is unfolding, you just can’t see it most of the time.

Worldend Syndrome is a visual novel published by Arc System Works and developed by TOYBOX that boasts a pedigree of being made by people who have worked on games like BLAZBLUE and Deadly Premonition. A game placing itself in both the romance and mystery genres, Worldend situates you in a small Japanese town full of superstition and folklore where a supernatural mystery has begun to unfold. At least this is what I’d like to say, but the unfortunate truth of the matter is that Worldend Syndrome treats its mystery less like a focus and more like a carrot on a stick that for the most part sits just out of view. 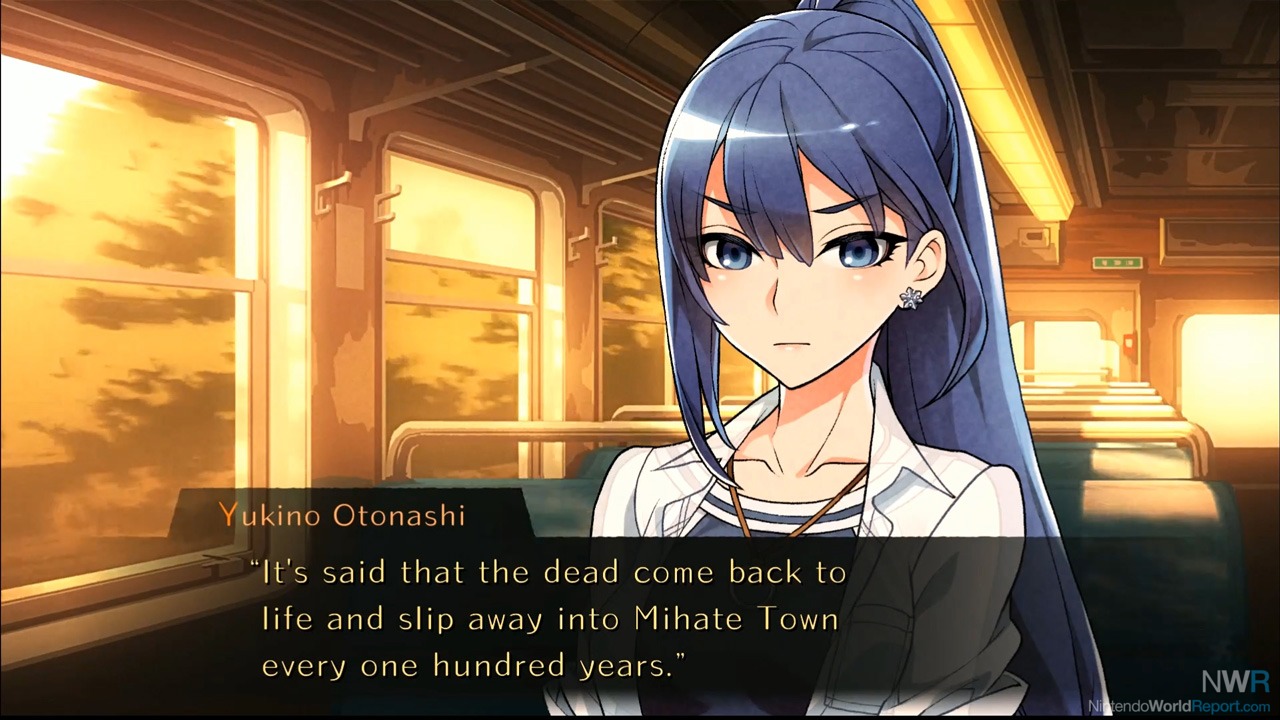 In Worldend Syndrome, the player takes control of a 17-year-old high school student who has moved to the rural Mihate Town after his life is uprooted by tragedy. With the hopes of starting a new life, he begins attending the local high school, is pushed into joining the school’s “Tribal Studies Club” (often referred to as the Mystery Club), and becomes acquainted with the club’s members. The club begins to research one of the town’s most famous myths, which claims that every 100 years a person who has died returns to Mihate as a “Yomibito” and brings misfortune to the living, often resulting in massacres or other assorted tragedies. According to the calendar, the last Yomibito encounter occurred 100 years ago, which means that, according to myth, the town is soon due for another. Is this just a folktale meant to scare children, a superstition for the elders of the town to hold on to? Or do the sudden disappearances and potential murders of two young girls indicate that something more may be going on?

While its four to five-hour prologue section may indicate differently, the mystery of the Yomibito takes a massive back seat to the romance and slice of life angles that make up a majority of the game’s narrative. As is the norm for this genre, all but one of the protagonist’s fellow Mystery Club members just happen to be girls that you can date, and they fall into some of the usual tropes of visual novels: Saya is the snooty rich girl, Miu is the quiet and reserved club president, Hanako is the shy and spastic girl with a secret, Yukino is the older big sister figure, and Maimi is the cute but crude athlete (in addition to, unfortunately, being the main character’s cousin). The one exception to the overabundance of females is the player’s “best friend” character Kensuke, one of the most obnoxious and annoying versions of this type of character I have ever had the displeasure of spending time with.

The game is split heavily into two halves, the prologue and the main game where slice of life and the various girls’ romantic routes take priority over the mystery. The prologue plays much like your usual visual novel fare, with the player led around on rails with very little autonomy or control over where the story goes. While this section does include a few dialogue options, they appear to have absolutely no effect on the player’s relationships or even the scenes that they witness. It’s not until after they have passed this prologue section that the player suddenly has time slots to manage as well as free reign of the locations scattered around Mihate Town. Going to specific areas will sometimes result in an encounter with one of the romanceable ladies, which will in turn result in an increase to your “aura” of that girl’s specific color. Aura can be tracked using a handbook in the game’s pause menu, and the more aura you have of a specific color the more likely you are to wind up on that girl’s romance route, depending on your actions during mandatory events.

The main part of the game only lasts one month, the entirety of summer vacation within the narrative, and at the end of that month if the player has successfully courted one of the available characters, they will then go on a date with them to the town’s summer festival. It’s after this point that the previously mentioned “carrot on a stick” suddenly comes into view for just a few fleeting seconds, and the implication that something fishy is going on begins to show through the cracks. This is only a tease of the mystery, though, and if the player wants more they will have to continue with all of the other routes the game has to offer. It’s unfortunate that the mystery only reveals small hints at a time every few hours, because for the most part the slice of life aspects of the narrative don’t hold up nearly as well. Even so, just those few enticing hints were enough to keep me starting over with the next girl’s route so that I could learn more about what was happening in Mihate Town.

Overall, if you are already a fan of visual novels as a whole, Worldend Syndrome will probably be successful at drawing you in. If you’re not already a fan of the genre, it isn’t likely to change your mind. Between the lengthy prologue and the slightly disappointing shift in gameplay that comes after it, Worldend has a lot of potential for its storytelling that it constantly seems to put just out of reach in order to pad out its length and starve the player of interesting information until the very last second, before repeating the same process over and over again. I can’t count it out completely; it promises a larger mystery and the morsels it would hand to me now and again were enough to keep me playing for several hours longer than I expected I would do so. That said, most players may find that those glimpses are not enough to keep their interest for more than one or two routes.