For The King (Switch) Review

Ain’t got time to make your own tabletop campaign? Take it to the digital streets with the local co-op marvel For The King.

I’m fascinated by how video games try to digitally recreate tabletop board games. More often than not, the end result is unwieldy, palely imitating the best traits of that style, whether it’s shoehorning great multiplayer into a restrictive solo experience or layering on so many rules and instructions that it needlessly overwhelms. For The King deftly manages to take elements of tabletop campaigns and pairs them well with video game conceits and mechanics to make a strong game that is engrossing by yourself and even better with a friend or two.

For The King wears its tabletop inspirations on its sleeve. To start, you pick one of six campaigns and create your three-character party that you can control yourself or play locally or online with up to two others. I toyed with it locally without issue, but random matches online were a little hard to find and stick to. Regardless, this seems like something best enjoyed with friends. Multiple classes are available, all different takes on traditional classes like mage, ranger, and bard. While a dedicated instructions menu is littered with complexities and explanations, I was impressed by how easy and intuitive it was to make a party and get to adventuring. What works so well about For The King is, in a way, the roguelike design. You can sink a lot of time into a campaign, but most of the time your failure is met with a lesson to take to heart for the future. Maybe stock up on more healing, bring along a magic user next time, or stay the hell out of the ocean to avoid the Kraken. 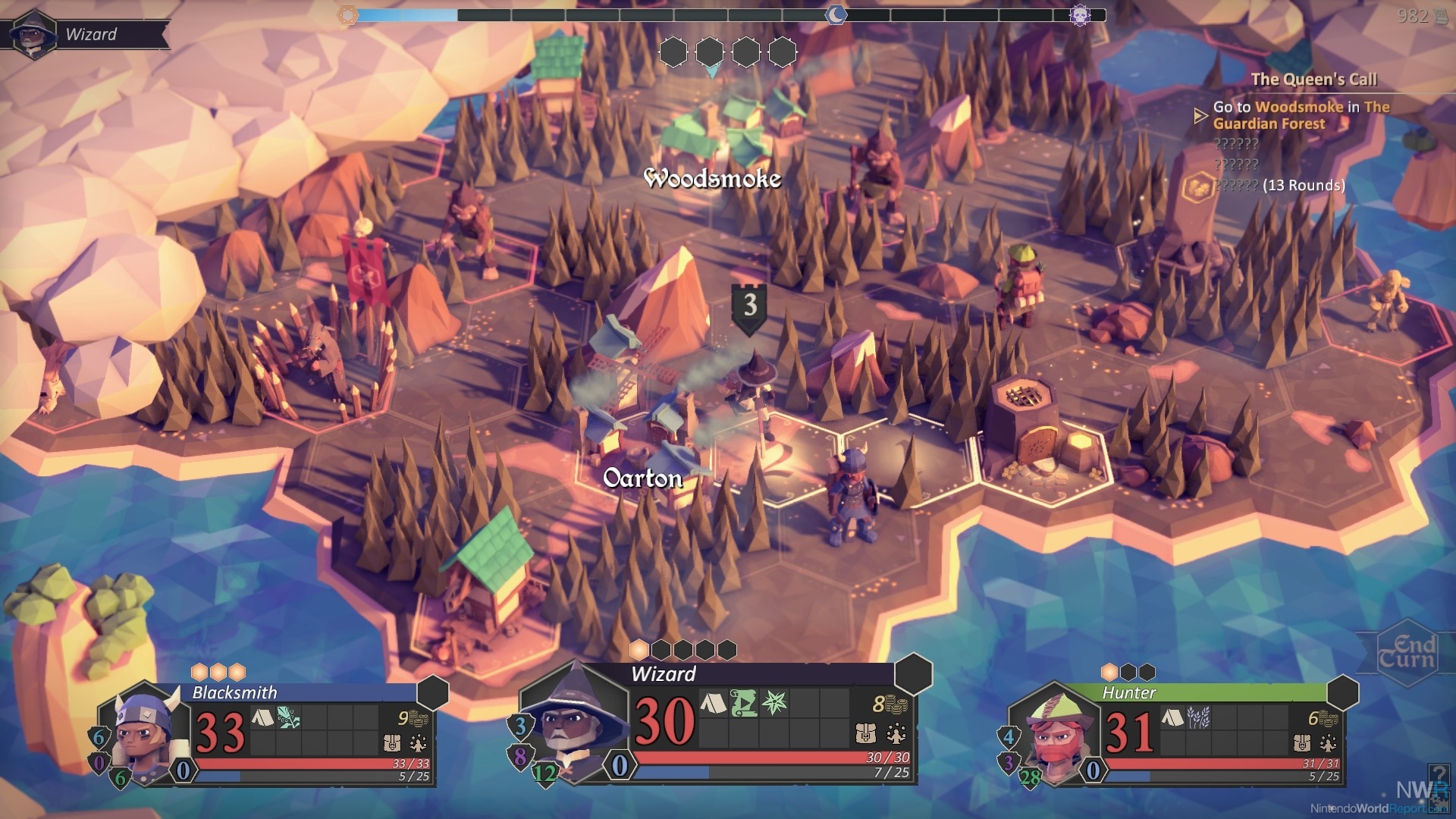 Out of the six campaigns, four of them are traditional adventures ranging from a few hours to completion to more than 10 hours. Each takes place in a different locale with a distinctive story, all with procedurally-generated levels and challenges. Each overworld map is hexagonal based, and your characters alternate between movement turns to explore the world. A wealth of tiles are what they are—they could be a town, a helpful boost, or a dungeon. Random events that are helpful or harmful sprout randomly, making the going easier or tougher but rarely stale. Enemies are visible on the map as well and when you run into them, you generally have to get ready for combat.

Combat is turn-based with your character’s attacks being based on their equipped weapons and subject to a virtual random number generator. RNG can sometimes be maddening, but this is true to tabletop design as essentially these attacks just simulate a dice roll. Item and equipment collection is important because while your characters do slowly level up, good weapons and gear can make a huge difference. 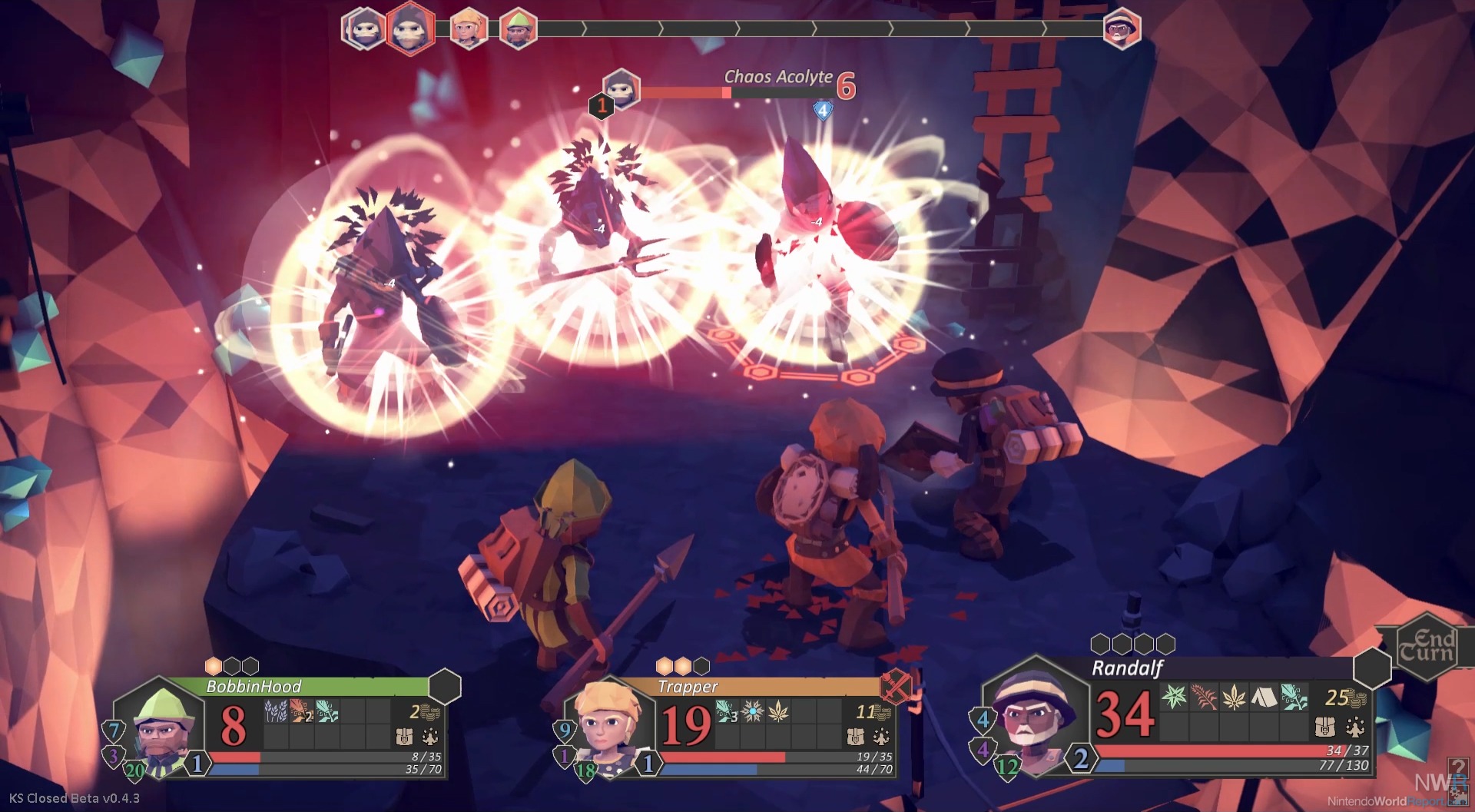 Dungeons offer another style, as your party travels from room to room, primarily contending with an onslaught of battles but also stumbling upon a random shop, obstacle, or treasure chest. The grind of dungeons grows weary with extended play, as evidenced in the endless dungeon mode, but as a complement to the overworld exploration, it’s a great change of pace, focusing a lot more on endurance and survival as you lose a lot of the escape hatches of the open air.

The sixth campaign is Gold Rush, which is an anti-co-op mode. While Gold Rush appears to require players to have prior experience with For The King to be truly great, it’s an extremely novel mode that is highly competitive as you try to bend the basic tenets to screw over your friends and get the most money. One demonic tactic is entering an area where you automatically make everyone in the party come to your spot, thus waylaying whatever plans your rivals might have had for their turn. With the right trio, Gold Rush is spectacular and laced with strategy.

Unfortunately, no matter how spectacular the single or multiplayer is, everything grinds to a screeching halt when the game crashes, which happened a handful of times during my play. An auto-save that happens at the start of every turn mitigates the lost time, but it’s still frustrating. Additionally, For The King is designed for a mouse and keyboard, so while the interface with a controller is functional and fine, it’s also clumsy and illogical at times. The occasional crash and interface complication doesn’t sink the whole thing, but it’s a drag on an otherwise stellar time. 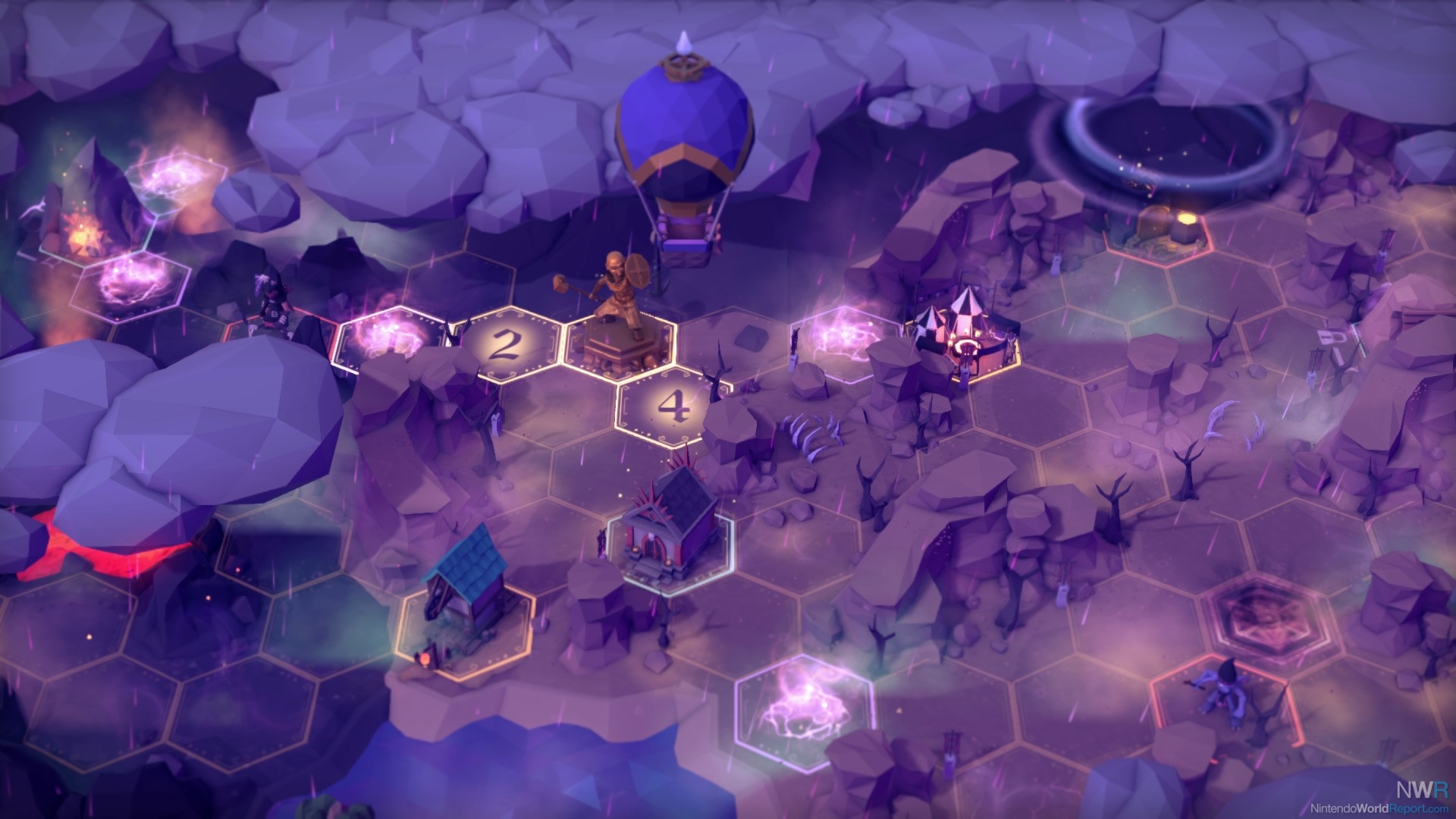 Similarly, it can take a while to hop into a game, primarily because of the procedural generation that has to happen at the start of each quest. That’s for the best though, because it makes the campaigns extremely replayable and filled with variety. While this leans on roguelike design through and through, you also accumulate lore that can be used to purchase a variety of items for later games, whether it’s new character classes and weapons, fresh instances and events, or even just more cosmetic options. In a way, the unlocks are an expansion to the base game that you gain access to the more you play. This is another smart way that For The King translates tabletop ideas to the video game space.

And that’s what For The King does extremely well: it effortlessly blends tabletop and video games into an enjoyable experience that claws at what both can excel at. Creating characters, exploring overworlds, battling through dungeons, and doing it all with a friend or two is a fun time. The roguelike design also helps make it a little more varied, making this great to break out at a game night. In a way, it’s like a tabletop campaign without a dungeon master. In the ideal circumstances, it’s electric and even just as a solo game, it’s a good ride.