Cool robots with grappling hooks is all I should have to say.

I find myself in love with the recent resurgence of true couch cooperative games such as Overcooked or Chariot. Sitting down with one or more other players and working together always seems to yield truly hilarious and extremely rewarding moments. Pitfall Planet, from Abstraction Games, embraces the need for two players and has managed to etch its way into my personal echelon of great couch cooperative games. A few hiccups detract from the experience, but its overall ability to produce both simple and devious puzzles coupled with a cute aesthetic makes it one you will not want to miss. 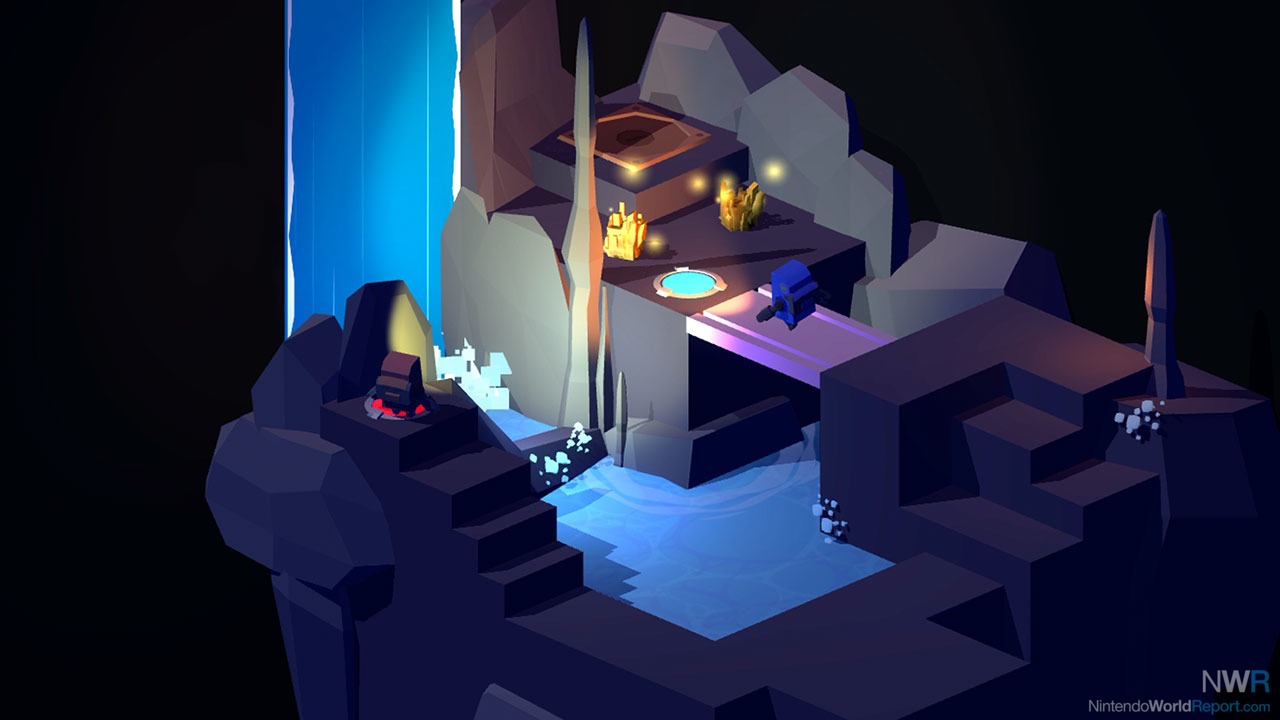 Pitfall Planet opens in space, as a snoozing captain manages to navigate his vessel right into a field of asteroids. Catastrophic damage causes some of the robots onboard to abandon ship and land on a nearby planet. Thus begins your journey to try and restore a previously crashed ship in hopes of one day escaping from the dangers of the planet you are now temporarily calling home. Some light interaction through journals found in levels chronicles the journey of another wayward robot, but other than that there isn’t much in the way of a narrative. In a cooperative game it’s not necessarily required, but having the few loose threads tie the entire package together is welcomed.

Levels in Pitfall Planet are all functionally the same; collect all of the gold like trinkets and make your way to the escape elevator. Each level also has a bonus collectible diamond that varies in difficulty to obtain. The game unfortunately makes the choice to sometimes embrace difficulty through obscurity. Running around a level trying to find an object hidden completely behind a wall and offscreen just isn’t fun. Luckily I found that less than 50% of the collectibles were hidden this way, with the remaining using gameplay mechanics in more challenging ways to provide those dedicated to the game a bit more to do. 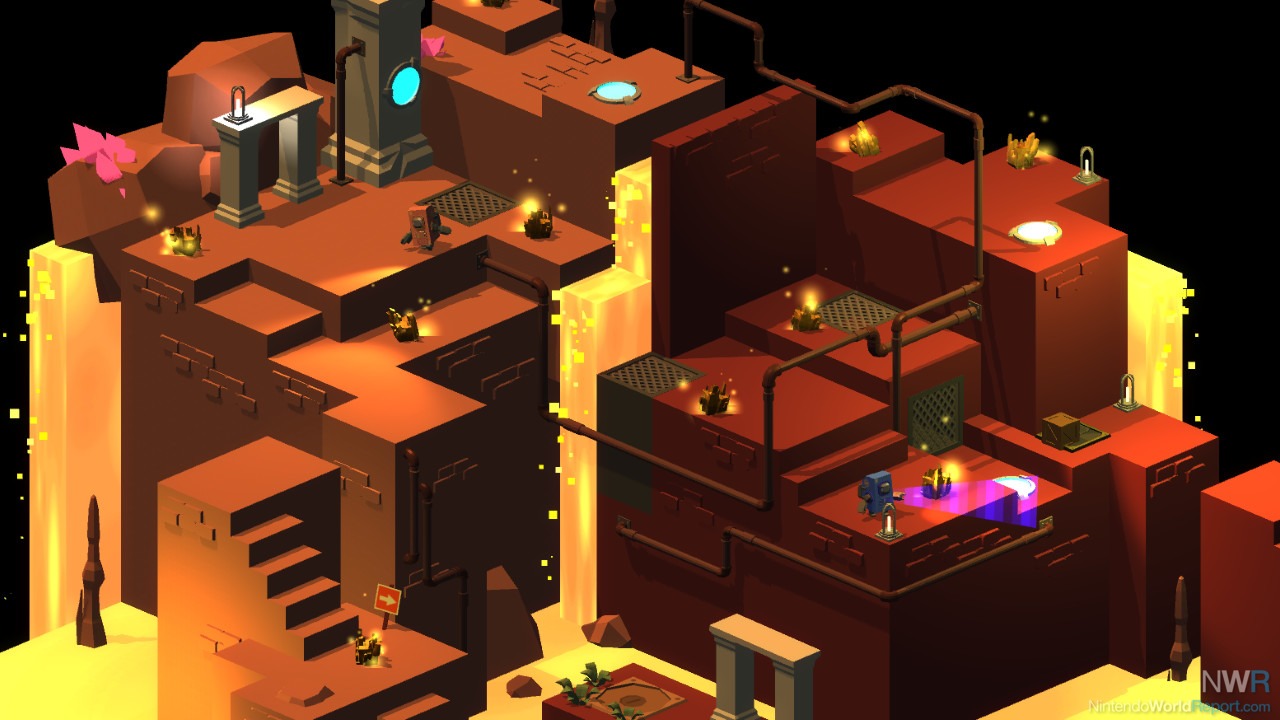 The cooperative elements require simple coordination between two individuals. Very few of the stages require fast reaction times which allows for route planning and puzzle solving to be much more methodical. The few levels that do embrace a frantic nature simplify the puzzles slightly so I never felt overwhelmed. The use of grappling hooks as your primary tool created some unique experiences as I grabbed gold, threw boxes, or even picked up my partner to reach new heights. Interaction with this partner robot is ultimately always going to be required, whether you are playing solo or with a friend. Solo play, while functional just isn’t the way to play as some tasks do require actions to occur near simultaneously which is tricky to manage with one controller. I adore the feeling of needing a second player, because while multiplayer games like Overcooked where you can complete a task individually but usually at a slower pace are fun, the delineation of required responsibilities in Pitfall Planet increases the engagement and interactivity of each stage.

All of the levels in Pitfall Planet are tied together through an overworld that tends to be slightly too large. Traversing between the groupings of levels can be tedious and seems unnecessary given the overall lack of things to do. There’s a small RC car that can speed traversal up, but ends up being unwieldy most of the time. The game may have benefitted from just serving up the levels via a menu and saving the overworld exploration for just the minor story beats. 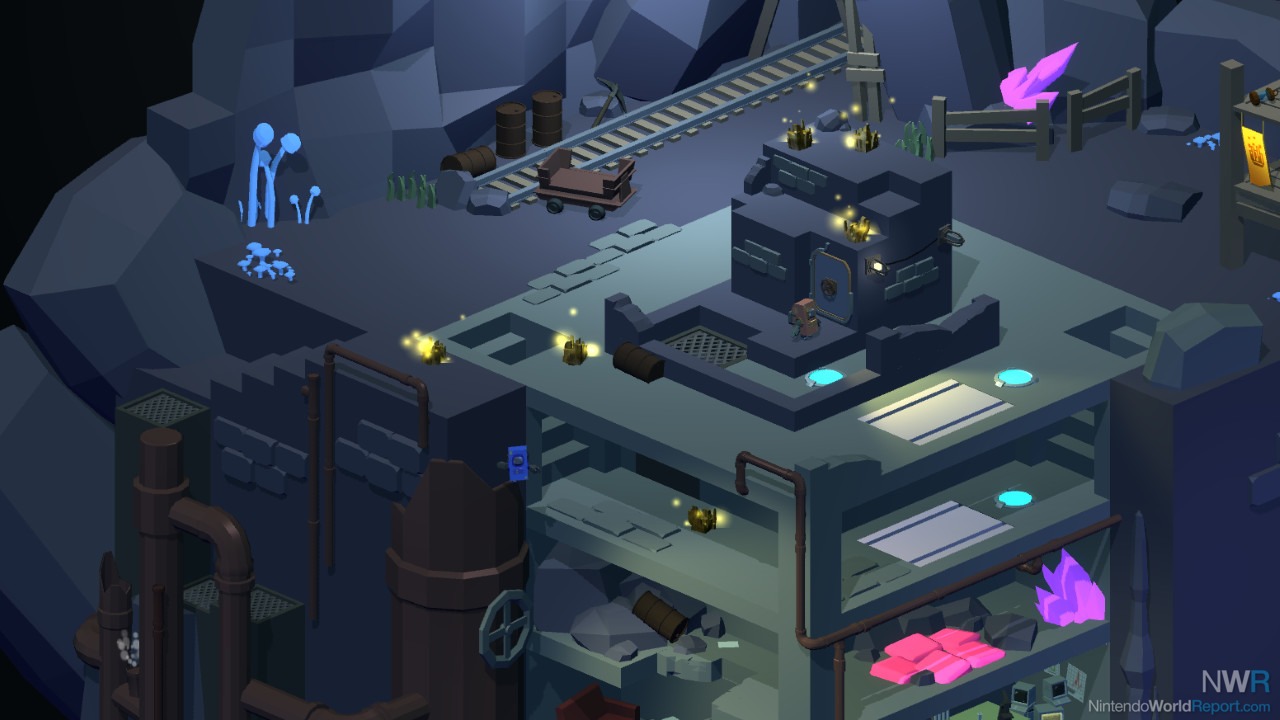 The entire package is wrapped up with a cute block like appearance and a great electronic, soothing soundtrack. The simplicity of it all does mean when you get stuck you can’t really blame the environment for being too complex. Lighting in the levels highlights the areas to both be explored and interacted with telegraphing everything you need to touch clearly.

I loved my time with Pitfall Planet, but felt that the experience was a tad short as I neared the 100% completion mark after only 6 hours. The difficulty of levels climbed slowly but steadily over that time period and I felt a few more hours with the ever increasingly complex levels would have been nice. However, that shouldn’t detract from what is presented in the package as it is a tightly designed cooperative puzzler that can compete with the best in the genre.