Nana & Popo are back in the arcade port of their famous NES game.

The Ice Climbers, Nana and Popo, are probably most famous for their several appearances throughout the Super Smash Bros. series. However, they originally got their start on the NES in a title aptly named, Ice Climber, a game that is playable on the Nintendo Entertainment System Nintendo Switch Online application. Shortly after the original NES version released, Nintendo followed up with an updated version for their VS. System. Now after many years this obscure version of Ice Climber is playable at home as part of the Hamster's Arcade Archives series. 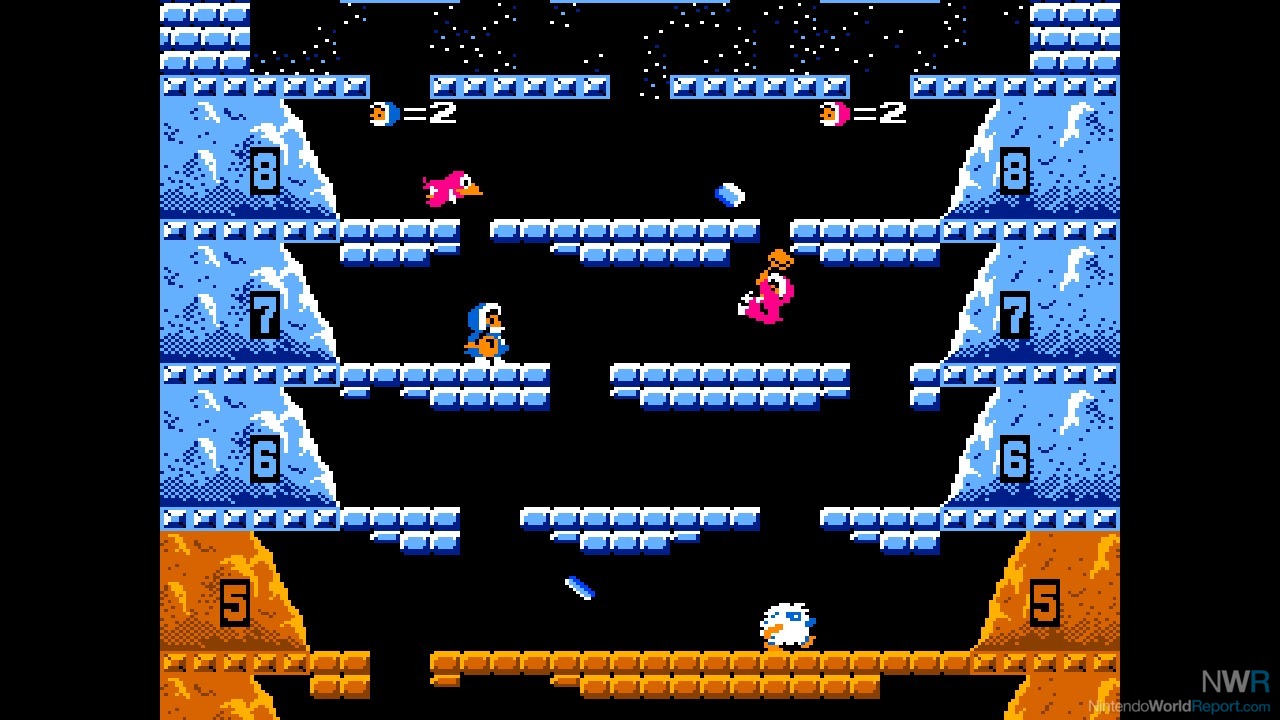 Ice Climber is a bit of an oddball in that it's a score based vertical platformer, but also has stages. Your goal while playing may be different depending on what you want to do. You can go for a high score, as breaking bricks, killing enemies, and collecting vegetables in the bonus stage can rack up points at the end of a level. Or maybe you just want to try and complete the stages by making it to the top of each Mountain. Ice Climber has a two player mode as well and like Mario Bros. you could work co-cooperatively or competitively which is neat. But I can assure you working together in this game will not be easy.

The controls in VS. Ice Climber are just as wonky as in the original. The player can walk, jump, and attack by swinging a mallet. Jumping also initiates an upward attack, and if you manage to run a few steps before jumping you will get more horizontal distance. None of this feels very good overall and I'd love to hear more about the design choices behind the notoriously bad controls in Ice Climber. Was it done on purpose because the game would be too easy otherwise? Maybe, but they still don't feel great and will cause a great deal of frustration among those unfamiliar with them. 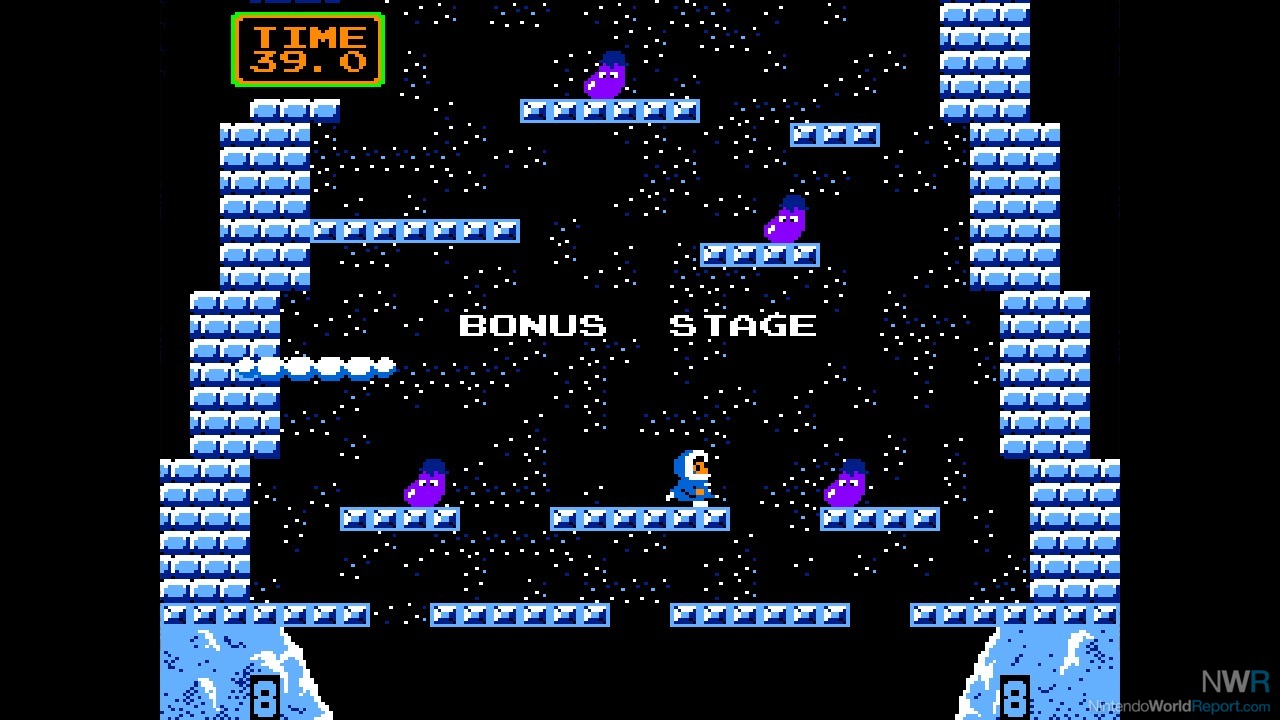 Each stage in Ice Climber is broken up into two parts. The lower half and the Bonus Stage at the top. The lower half has enemies which can be killed for points, alongside breakable bricks that also earn points. The Bonus Stage is full of random point adding Veggies, as well as a Condor at the top when grabbed will count towards your total. If a player fails in the Bonus Stage part of the level though no lives are lost the stage is over. Points for the entire level are tallied at the end of Bonus Stage successful or not.

Up until this point I've talked about Ice Climber in its base form and the information would be accurate to both the NES and VS. Arcade versions. That said, the VS. Arcade version of Ice Climber does a lot to stand out on its own and truly feels like Ice Climber 2.0 in a sense. For starters, the NES version of Ice Climber features 32 Mountains and the player can choose to start with any. The VS. version has 48 different Mountains and the stage selection works a bit differently. At the start, the player will be choice of any Mountain between 1 and 24. After finishing eight, the player will then have access to Mountains 25 to 48. After an additional eight are completed the player will be sent back to the list of the first 24 mountains. Every eight stages this continues until all are completed and then the loop starts over. Some of the stages in VS. Ice Climber are the same as the NES version but plenty of new stages have been added as well. 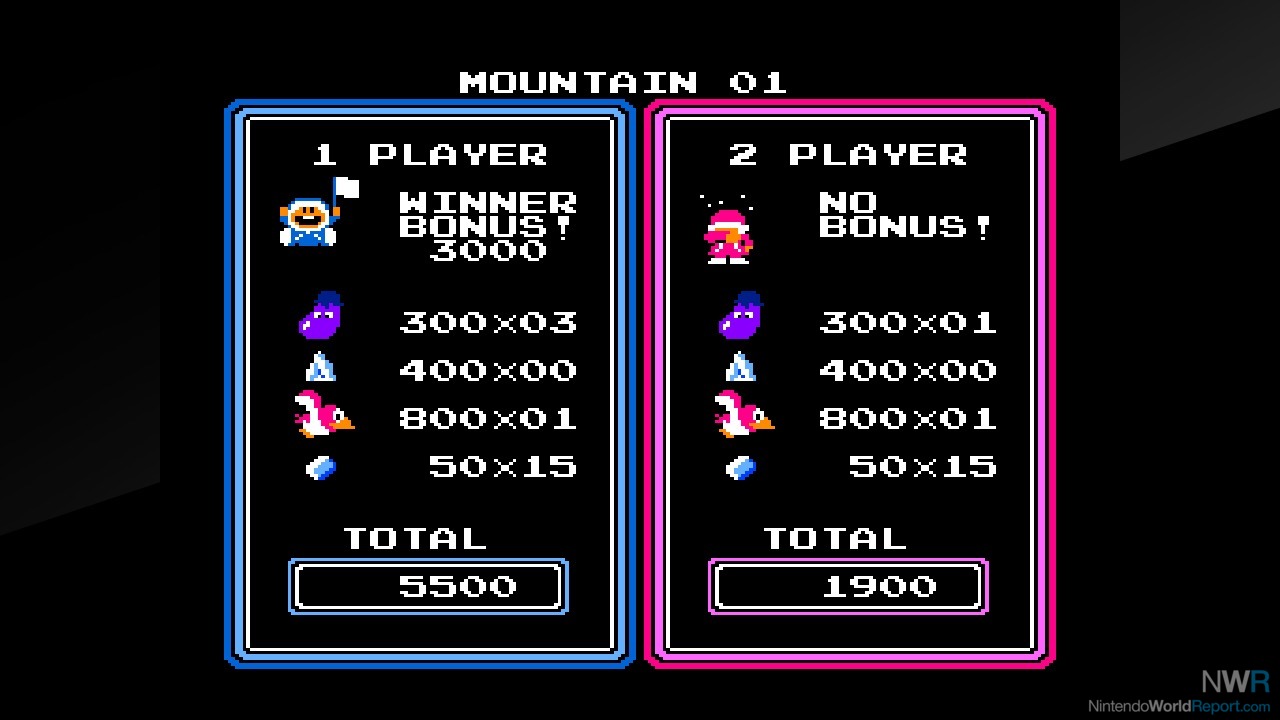 VS. Ice Climber also lets you know what Bonus Stages you've successfully completed by placing an Ice Climber image where the stage's number was previously placed. A failed Bonus Stage will have the image of a Topi, which in every version of this game is the little yeti monster and not the seal as seen in the Japanese NES version. I haven't been able to completely figure out what triggers this, but it appears as though successful completion of eight Bonus Stages in a section will then unlock one of two Super Bonus Stages. These are straight up platforming challenges with a time limit to make it to the top. They are pretty fun and something that is lacking in the NES version as far as I can tell.

There is also a random chance that a wind or snow storm will take place during a stage. This causes wind to move from the left to the right and can make levels harder. The effect of both weather types seems to be exactly the same other than some slight graphical changes so I don't know why the developers thought to add both. It's kind of strange but helps the VS. version stand out.

New enemies have also been added to the game. First is a Bee which launches horizontally from either side of the screen and homes in on the player. To survive this rare enemy type the player will have to whack the Bee with their hammer or manage to dodge it as it will just fly to the other side the screen after a miss. Just note, killing a Bee counts as a killing a Nitpicker (bird) enemy for scoring purposes. The other new enemy is the Moth which replaces the Condor at the end of the later stages. These new characters are great and really add to the Ice Climber lore which I love. 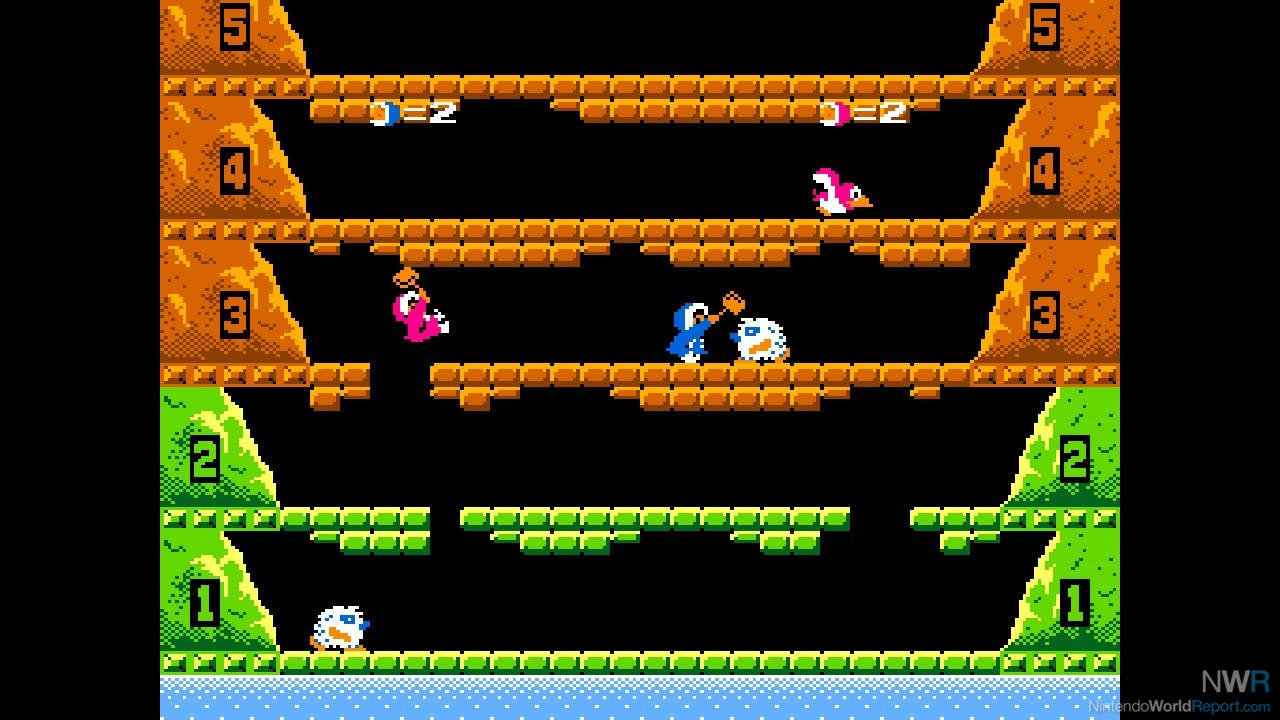 VS. Ice Climber also introduces a few new gameplay elements. One is an item which can be found in bricks in the lower half of each stage. These items can increase the point value for Veggies found in the Bonus Stage. They do, however, seem to be very rare. Another new element are platforms that not only move left and right, but at the same time bounce up and down. These new platforms are interesting though and can be very challenging to deal with. Lastly, there is a high score leaderboard where you can enter your initials for arcade glory.

Ice Climber can be fun in short bursts, but there is almost always a feeling of frustration while playing. As a player you're not only fighting with the weird controls, but with nearly every gameplay element at once. Sometimes you are trying to slip in a hole while fighting a platform that forces you to move left and right. Other times you're trying to make it up to the next plateau while trying to make it through a small gap you've created by jumping off a fast moving platform before a Topi fills it back in with ice. Also you can't take too long or else the Polar Bear will appear and force the screen upward a notch probably killing you. Those platforms that bounce up and down as they travel horizontally only add to the difficulty. Yeah, Ice Climber is a hard game, and I only made it through all 48 of the stages for this review by using save states. At times it's brutal.

The Arcade Archives wrapper that VS. Ice Climber is placed in offers no surprises, but that's not a bad thing. Three modes are available when booting up the title: Original Mode, Hi Score Mode, and Caravan Mode. Original Mode lets players enjoy the game as if they had the arcade cabinet in their home. It features a bunch of display, sound, difficulty settings, and control options, as well as an Online Leaderboard. The Online Leaderboard in this mode is fairly pointless though as it's possible to abuse save states. The confusing option called "The Original Game's Character Designs" which can be toggled on or off never seems to make any difference in any of the Arcade Archives games I've played. Is it just some remnant from one previous game they developed? I don't know. Regardless, the plethora of options is very nice and helps give players the experience they want. 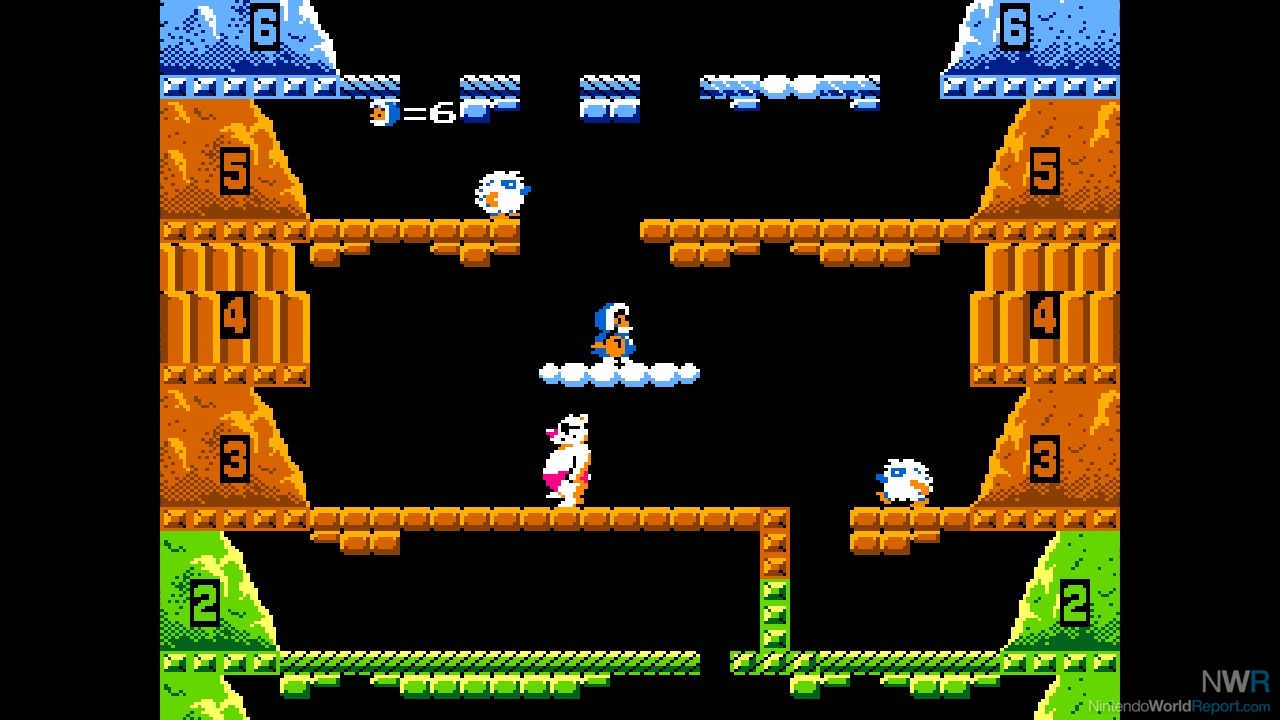 Hi Score Mode is the main mode for serious score hunters. This loads the game up with competition settings and let's someone go through the game on one credit to see if they have what it takes to be the best. Caravan Mode is similar, but only gives the player five minutes to set a record score. At the end of a round in these modes it's possible to upload a score to Online Leaderboards in each category. It's a nice feature, even if I don't find Ice Climber to be a very good scoring competition game. Still, the Arcade Archives wrapper still has the annoying flaw in that it's too easy to accidentally end a high score run by just pressing the Plus Button in these competition modes. There should really be a button combination as it can be super easy to just mistakenly end a run out of a pausing habit.

For historical reference I want to discuss that there is a second game known as VS. Ice Climber that was released for the Famicom Disk System after the arcade version. I have not been able to play it but I've tried to do some research just for comparison purposes. The Famicom Disk System version of VS. Ice Climber seems to be very similar to the Arcade version except that the Moth enemy at the end of the later stages has been replaced with a Blue Condor. While this further expands the Ice Climber lore by adding a new Condor color it just doesn't seem as cool. Also, while I haven't been able to confirm this on my own, some sources claim the Bee enemy doesn't exist anymore in the Famicom Disk System version. Instead, it's behavior pattern still exists, but the sprite just uses a Nitpicker (bird) instead. Again, I haven't been able to confirm the Bee claim but even without it the Moth may help make the arcade version of VS. Ice Climber the definitive version of the game. 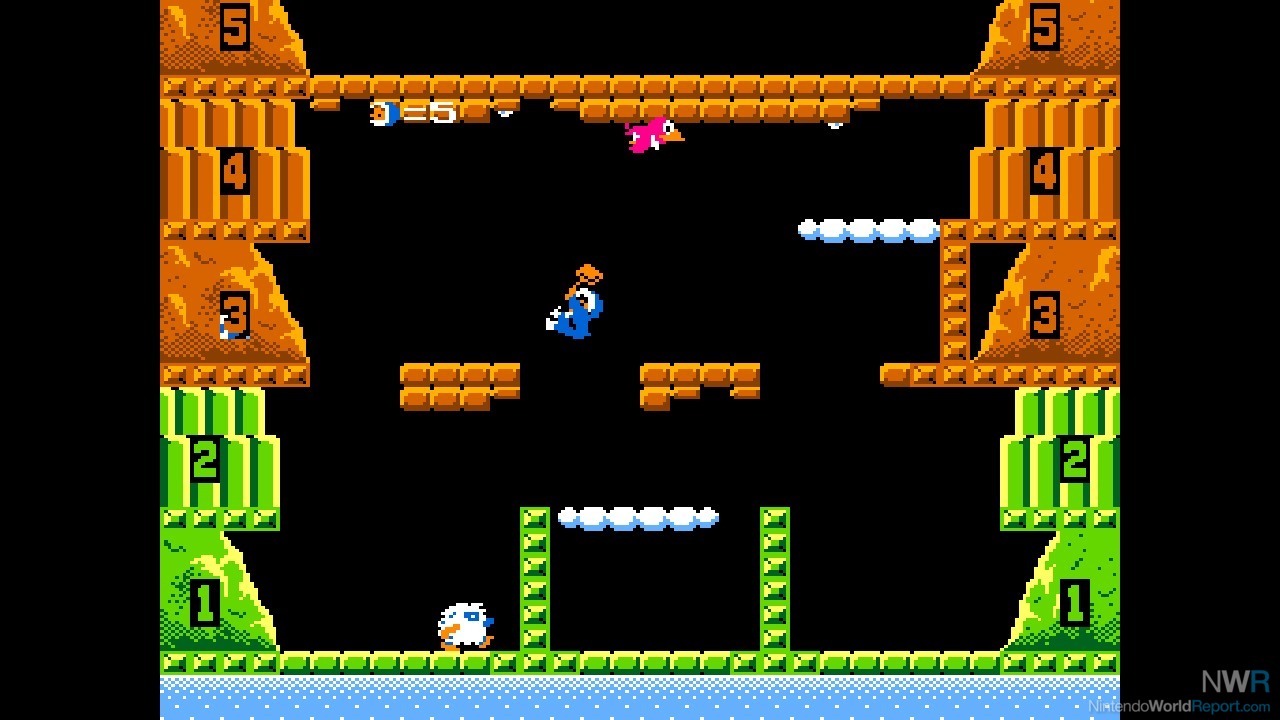 Overall, VS. Ice Climber is an improvement over the NES release but it still has all of the rough edges the original incorporated. Frustrating controls and the sometimes evil stage design will likely drive many new players away. The new additions to the game are nice and really help the quasi sequel stand out. The new gameplay elements and expanded lore are to be applauded. However, VS. Ice Climber still seems to straddle the line between a score attack game and a level based platformer and fails to really succeed at either. The Arcade Archives wrapper is mostly a positive addition giving players tons of options to really customize the experience even if it still carries the same usual flaws.

Arcade Archives VS. Ice Climber isn't a game for everyone, but I'm confident in saying it's the definitive version of Ice Climber. While it may not be a top tier title, I'm really happy Hamster and Nintendo are working together to bring these hard-to-find games to home consoles for the first time so it's easier for people interested in Nintendo history to experience. I've honestly never seen VS. Ice Climber in any arcade and probably for good reason. Still, it's nice to see how Nintendo went about improving the original game in different ways. Even with all its flaws, I'd still recommend the Arcade Archives VS. Ice Climber to collectors, gaming historians, those who wish to support the Hamster Nintendo partnership, and maybe to those excited to see a slightly expanded Ice Climber lore. Honestly, with all the attention brought to the series protagonists Nana and Popo in the Super Smash Bros. series it's time for Nintendo to do these characters justice with a new game that's really great. It's a shame this now iconic duo is stuck being the stars of various iterations of a subpar game.