A collection of oldies but not so goodies.

Arcade Classics Anniversary Collection is a long and slightly deceptive title: the bundle includes eight Konami arcade games, but most of them wouldn’t be considered classics. Here are the games and the year in which each was released: Scramble (1981), Twinbee (1985), NEMESIS (1985), LIFE FORCE (1986), TYPHOON (1987), HAUNTED CASTLE (1988), VULCAN VENTURE (1988), and THUNDER CROSS (1988). All but HAUNTED CASTLE are shoot-em’-ups, so immediately there is a distinct lack of variety to the package, but brutal arcade difficulty and few quality of life features are just as sour a note as the games themselves.

In any package that bundles multiple games together, the strength of the titles on offer ultimately determines the overall value of the collection. To that end, I decided to provide a personal ranking of each game in the Anniversary Collection in addition to a mini-review:

The best thing about HAUNTED CASTLE is that it isn’t a shooter. This side-scrolling action platformer is a frustrating arcade rendition of Castlevania that came out two years after the much better first entry on NES. Movement and jumping are clunky, and the stages are bland and littered with cheap deaths and unfair enemy placement. HAUNTED CASTLE is dead last for a number of reasons. Don’t bother playing it unless you are in the mood for some self-punishment. 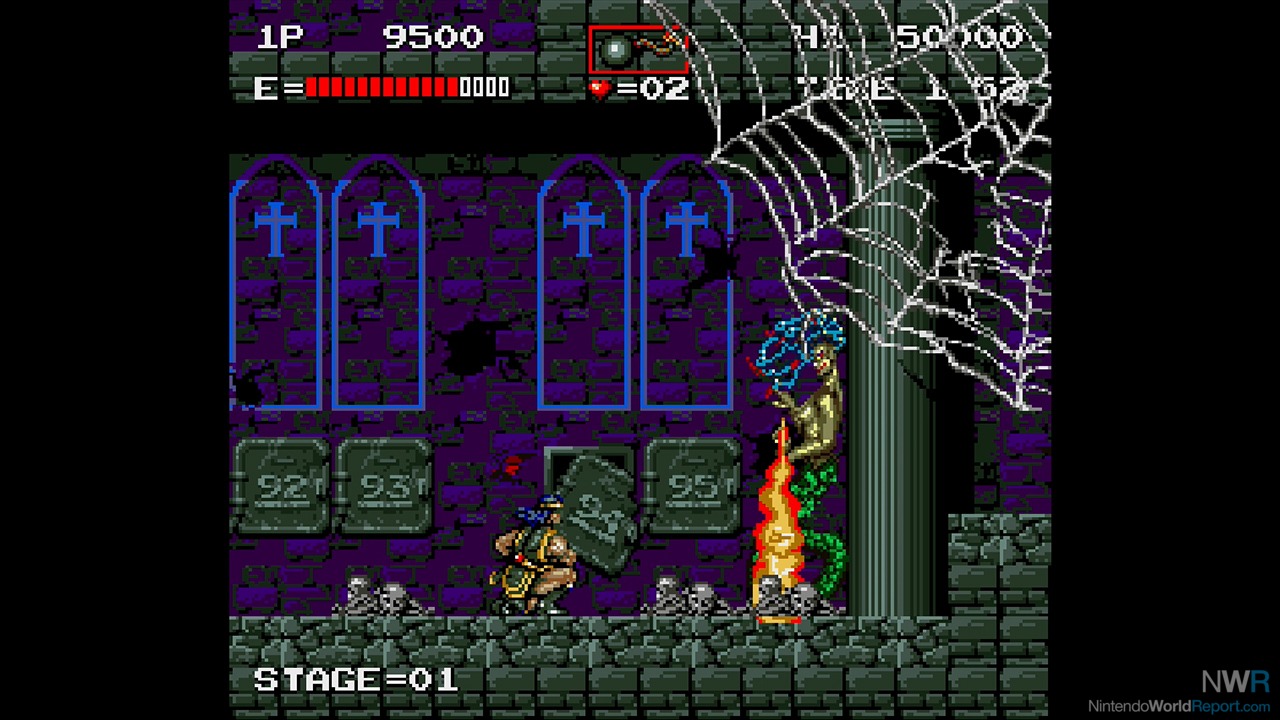 Scramble is the oldest title in the collection, and its age certainly shows. Your ship can drop two bombs at a time and fire small bullets out in front. Movement is slow, and you can’t fly around the whole screen as an invisible wall impedes your progress when you try to go too far forward. Your primary targets are rockets that fly up out of the ground attempting to launch themselves into you, and you also have to destroy fuel canisters on the ground to replace your slowly depleting fuel meter. It’s fun for a little while, but there isn’t a lot of variety to it.

NEMESIS was the name for the arcade release of Gradius outside of Japan, and it was the first game in the horizontal shooter series to introduce the weapon bar. At the bottom of the screen is a row of options that allow you to choose how to upgrade your ship. This is the prototypical shoot-em’-up, and it’s the first of three titles in the collection that come from the Gradius universe. Overall, NEMESIS is fine, but I find the other games in this package more compelling.

The best thing about TYPHOON is that this vertical shooter uses two different perspectives: a 3D almost top-down perspective and a standard 2D one. In the former, you control a fighter jet and destroy waves of enemies that seem to rise out of the background and shoot missiles at you. From my experience, the 3D stages are a little more manageable. The 2D sections see you control a helicopter and are much more standard shooter fare, except for the ridiculous difficulty and enemies hidden under clouds. I appreciate the perspective switching, but TYPHOON is maybe a little too challenging.

LIFE FORCE is one of three titles in the collection that has simultaneous co-op play, but it is also incredibly challenging. It’s a shooter where your ship, the Vic Viper from Gradius, is fighting through what seems to be a human body. LIFE FORCE is notable for having both horizontal and vertical segments. Before being powered-up, your ship moves really slow, making certain boss encounters almost impossible, and slow down is a fairly frequent occurrence. That said, I do like the unique backdrop and ability to play through the game with a friend, which is likely to be your best chance of making it all the way through.

VULCAN VENTURE is the name for Gradius II outside of Japan, and there’s no mistaking the fact that this is a sequel to the original Gradius. The game looks and plays nearly the same, but a key difference is that the screen essentially wraps vertically, so you can fly up or down to scroll the screen, and this essentially doubles the playing space. The weapon bar makes its return, but at the start of the game you can choose from a few different weapon bars that have slightly different missiles or lasers, for example. There is also a two-player mode where players take turns playing through the game. The changes and variety put this one a few spots higher than NEMESIS.

THUNDER CROSS is the most recent title of the collection and it’s a very by-the-books horizontal shoot-em’-up. You start each life with two “options” and can collect up to two more. These are orbs that are arranged above and below your ship to provide extra firepower. You can upgrade your primary weapon only once, but you start each continue with three screen-clearing bombs, which can destroy bullets coming at you and do major damage to end stage bosses. I think THUNDER CROSS has the best music in the package, and it provides a fair challenge. Enemies here often fire bullets of varying speeds, which isn’t something you see a lot of in the shooter genre. There is also a two-player co-op option to help you get through the seven stages on offer.

Twinbee isn’t the best game in the Arcade Classics Anniversary Collection, but it is my favorite one. It’s a vertical shooter that has bosses and six stages, with a full playthrough taking under 30 minutes, but there is something charming about the more fantasy-like aesthetic and the loud and somewhat obnoxious sound effects. This game also features two-player simultaneous co-op. One of the key mechanics is juggling bells that pop up in the environment to power up your ship, and if you collect multiple bells without dropping them, you can score tons of points. Twinbee will always have a special place in my heart, and I’m glad it’s part of the bundle. It doesn’t hurt that it was released the same year I was born.

Arcade Classics Anniversary Collection also contains a Bonus Book with 100 pages of historical details, design documents, music scores, and developer interviews. Ironically, it begins with a list of Konami arcade games released during the 80s, so you get to see all the games that weren’t included or were overlooked in favor of the eight that were chosen. With their upcoming Contra Collection, I can understand why Konami didn’t include those titles in the Arcade Collection, but even titles like Pooyan, Block Hole, or Rush’n Attack would have given much needed variety to a group of games that plays largely the same. 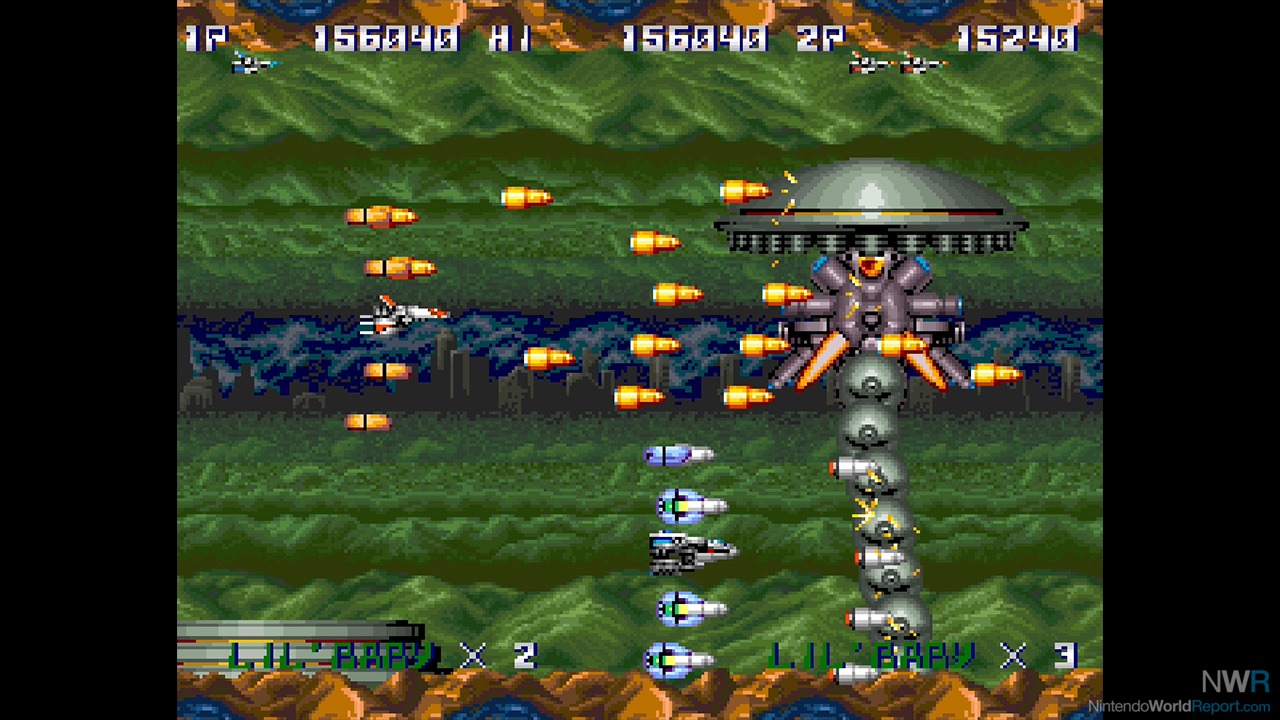 It’s worth being specific about the menus and options that are available in the Arcade Classics Anniversary Collection. Each title has a single save file and you can load the file at any point while playing that game. There are also game settings that allow you to tweak difficulty and specific elements like number of lives. The next set of options relates to the in-game display, and here you can turn blurring on or off, adjust the display ratio, add one of two frames to border the middle of the screen, and keep or remove a banner at the bottom of the screen that displays the controls. The final settings pertain to controls, and here you can remap buttons and turn on rapid fire. It’s easy to access all of these options in game, but it would have been nice to see more specific game options for each title and more of the modern features we have seen recently.

I can’t help but compare the Arcade Classics Anniversary Collection to other retro compilations like the SNK 40th Anniversary Collection, which albeit arrived at a higher price point but provided many more titles and much needed variety. It also has a feature that allows you to watch playthroughs of each game and hop in when you feel like it. Even the SNES Classic has a rewind feature that lets you jump back in time to retry a particular segment. A lack of online leaderboards or any type of achievement system also lowers the replay value of the Arcade Classics Anniversary Collection. Unless you are terribly nostalgic for the games in this package or a die-hard shoot-em’-up fan, I can’t fully recommend it when there are such better value propositions out there.