Smashing the Battle is an incredibly repetitious brawler in which you take control of Sarah O’Connell, an impossibly voluptuous woman in ill-fitting battle armor, and beat the crap out of endlessly-spawning robots while dodging attacks and avoiding environmental hazards. This is essentially how the Pokémon Rumble games work as well if you substitute Pikachu for Sarah. I liked my time with Pokémon Rumble Blast, but it got old very quickly. It’s a similar situation here, although Smashing the Battle has just enough depth to keep me coming back for more. Well, it also has an impossibly voluptuous woman in ill-fitting battle armor. 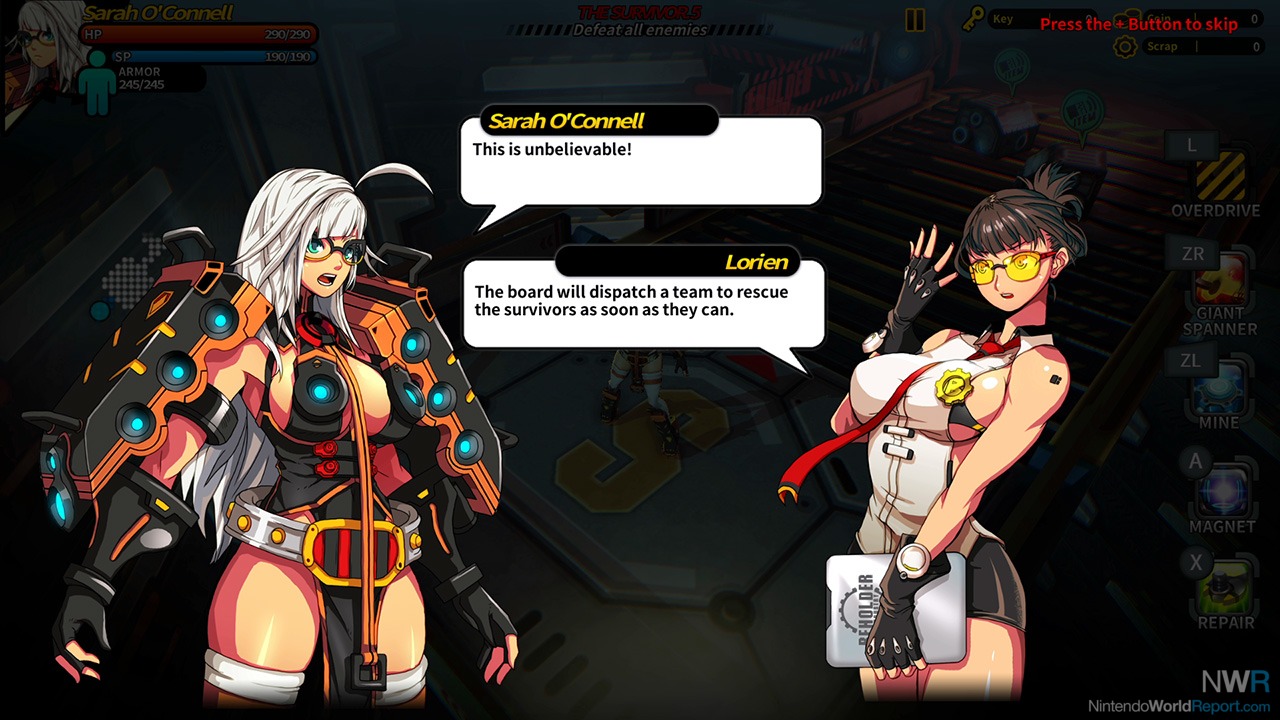 There’s a paper-thin story in which Sarah becomes trapped in a subterranean facility and, thanks to the help of a similarly-endowed-but-obviously-hiding-something security chief, she acquires said ill-fitting battle armor and proceeds to beat the tar out of industrial robots. Every single one of the game’s thirty missions involves smashing droids. Sometimes there’s a time limit. Sometimes you have to survive several waves of enemies. Sometimes there’s a giant crusher thing threatening to turn Sarah into a pancake if she stays in one place too long. But your goal is always the same: smash dem robots.

Smashing the Battle began life as a VR game, which doesn’t even make sense, and was then ported to mobile, and you can kind of see its oversimplified roots on the Switch, with big on-screen icons for every skill attack. Sarah smashes things with her giant wrench, dodge-rolls, and can use four skills set to ZL, ZR, A, and X. You can also activate “Overdrive” mode, which is Smashing the Battle’s version of Frantic mode in Senran Kagura: Sarah’s armor is cast off, giving her an offensive boost but virtually no defense.

Oh, there are some wrinkles. Skills have cooldowns but also cost Skill Points (SP) to use. Skill points slowly build back up over time, but you also get small SP boosts by dodging right before you’d take a hit. Sarah’s armor can actually break, leaving you temporarily skill-less, but eventually it reforms. There are pickups littered around every area that give you money, health, SP, or temporary stat boosts. You’re graded on every mission, from one to three stars, based on getting two “massive kills” (lots of bots killed at once), ten successful dodges, and a 20-kill combo. This is often more difficult than you’d think, especially during timed missions.

Getting a three-star rating nets you a key, which can also be (very rarely) dropped by boss robots. You can use keys to rescue the occasionally-encountered hostage or, more often, unlock lore documents and fan art—yes, fan art as opposed to concept art—from the main menu. You’ll use money and “scrap” to upgrade Sarah’s armor and/or buy new battle armor skins, each of which has its own unique buffs. Unfortunately, subsequent upgrades come at an ever-increasing cost, so you’ll want to grind early missions for money and three-star ratings, which can become kind of a chore. However, grinding is a virtual necessity as the robots get more dangerous and take more hits the further you get in the game. 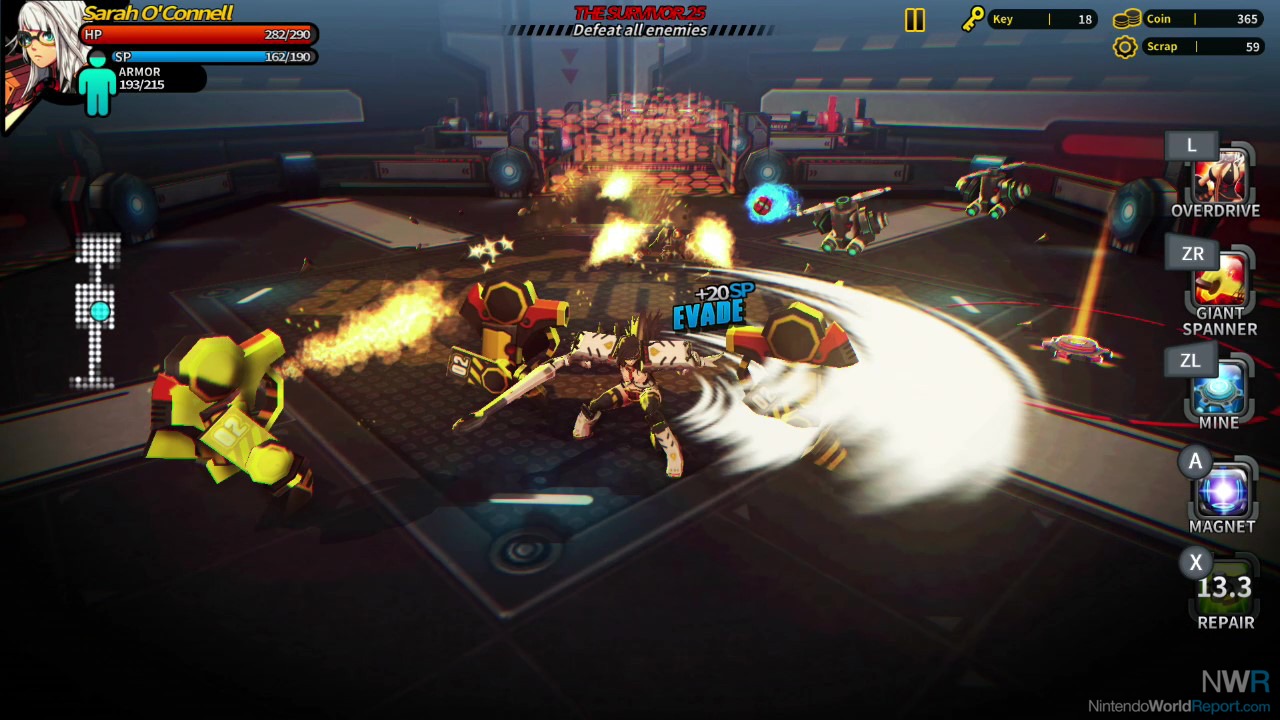 The core gameplay is fine but repetitious. What I don’t appreciate is how the game stacks hazards in later stages. You’ll be fighting bots that spit fireballs and lasers in areas that are literally on fire while trying to avoid getting smashed from above and surviving electric shocks from generators which you have to find and destroy. Add the occasional time limit and certain missions become exercises in frustration. Bosses have unreasonably hard-to-avoid electrical attacks. The game's aesthetic also never changes—you stay in the same subterranean facility the entire time—not even a change in color scheme. Once in a blue moon you’ll be given a branching path, but the best you can hope for is finding a hostage to rescue on one or both paths. As far as I can tell, there are no camera control options. I like my X and Y-axis inverted for camera control, so when it’s “normal,” I have a tough time adjusting. Sarah’s attack rating, by default, is significantly lower than her HP, SP, and armor ratings, which is very clear when you’re playing the game, as many bots take a weirdly long time to kill but Sarah remains largely intact.

The graphics are just okay. The environment looks good but very basic, and the bots look kind of cheap. Sarah, as much as I’m a fan of her buxom figure and gratuitous idle animation, seems suspiciously low-poly on closer inspection. None of this really matters because the camera is zoomed out during missions, but it’s noticeable. I think there are maybe three musical tracks in the entire game, the best of which is from the main menu. Once you complete all thirty missions, you actually unlock a second character who plays much differently from Sarah, which is really cool, but you simply do the same thirty missions again and no, there isn’t two-player co-op. This game probably didn’t need thirty missions; maybe twenty would suffice.

I find the game is best in short bursts. I think we’ve all played 3D brawlers that outclass Smashing the Battle in virtually every category. Having said that, I do find myself enjoying the game. It’s not perfect, but it has heart. Well, that and an impossibly voluptuous woman in ill-fitting battle armor.