A Deep Reimagining of a Card-based Classic

At its core, Monster Slayers is a combination of three unique genres: role-playing, roguelike, and card-based. The card-based genre is one that turns a lot of people away at first glance, but Nerdook Productions was able to make a game accessible to newcomers and veterans to the genre. Monster Slayers, a complete reimagining of the web-based hit of the same name, strives to combine a never-ending adventure with the deep intricacies of a typical turn-based RPG and is able to do so without compromising its deep mechanics. 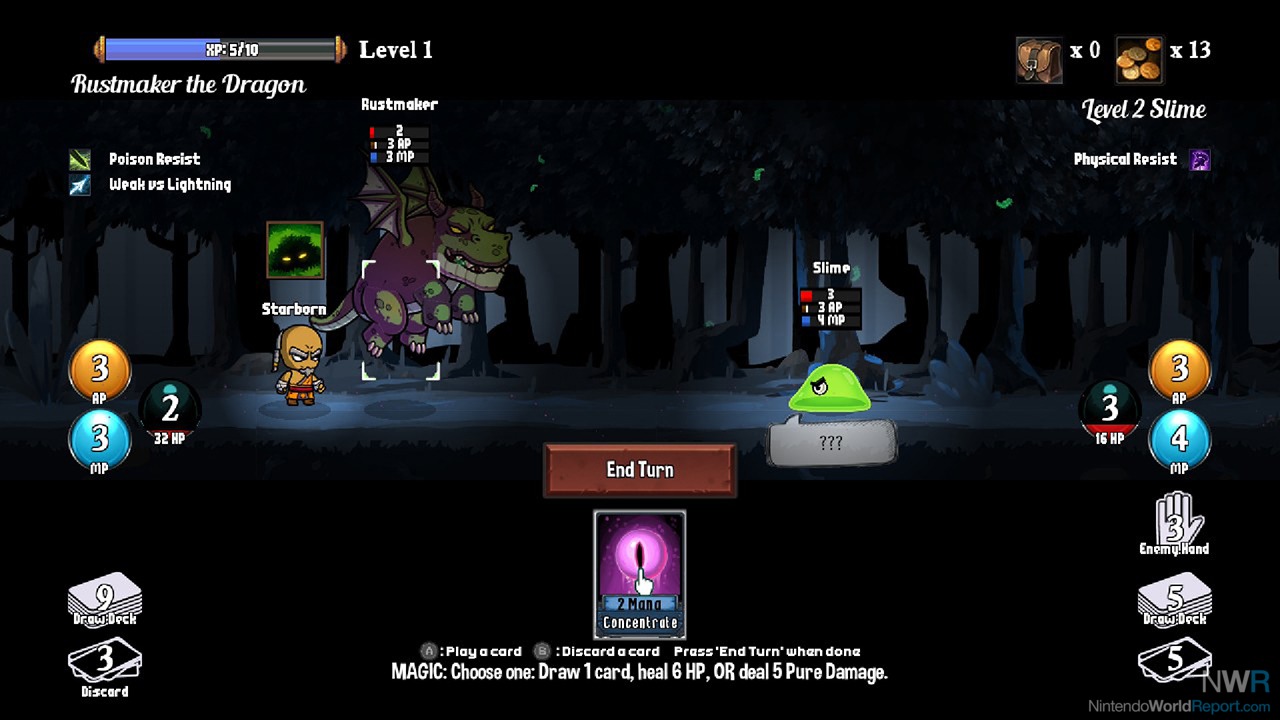 Each playthrough begins the same way with picking a class of character and making them your own. The medieval setting lends itself to a wide variety of classes, including a powerful knight, a speedy ranger, and a balanced merchant. Each class gets their own deck of cards and set of perks, which can be upgraded regardless of which class you are using, and each perk earned carries over to your next playthrough. The biggest drawback is in the character customization, or lack of. Each class has a couple different hairstyles and color options, but there is no deep customization to one’s outfit or accessories. This is especially noticeable after each death, where the game forces you to create a new character with the limited options, making many characters look the same if the same class is picked repeatedly.

Once the character customization is finished, a brief vignette about each character’s story appears, with the common goal of defeating three legendary monsters being the same each time. The player then gets a view of the world map and gets to pick between three randomly chosen areas to begin their first quest. Each grid-based dungeon is randomly generated, which allows the player variety in the different encounters. The goal is simple: defeat the boss monster somewhere in the dungeon and claim the hidden loot. 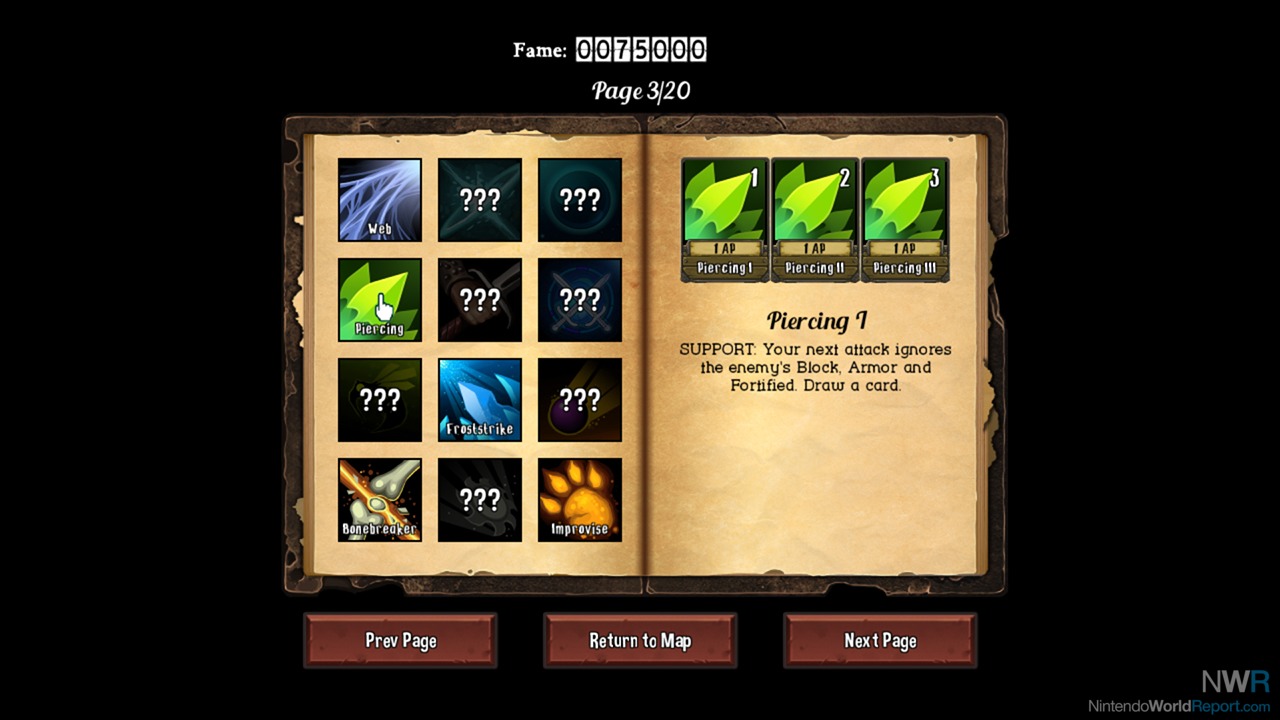 Every square on the grid contains either an event or a battle for the player. At the beginning of each dungeon, the player can select an ally with a special battle ability. These consist of a powerful attack, a healing spell, or restoration of mana/action points. The player can then move on and pick their first battle. At the start of each encounter, the player is dealt three random cards from their deck. Each card has an action point cost or a mana cost, which means that not every card may be used per turn. Once your action point gauge runs out, it’s the opponent’s turn to attack. As is standard in most RPGs, the goal is to get your opponents HP bar to zero without the same thing happening to you. The depth, however, is in building a deck that fits each player. Certain cards will do more damage than others with a higher AP cost, while others will focus on healing or defense. Building a deck that matches your playstyle is by far the best part of the game and makes each playthrough feel meaningful, as your cards and upgrades carry over to the next playthrough of the same class. Cards can be purchased from merchants with gold dropped from enemies, and each card can be upgraded at special spots in the dungeons. As veterans to the genre know, building an effective deck (which includes deleting old cards) is the key to any victory. 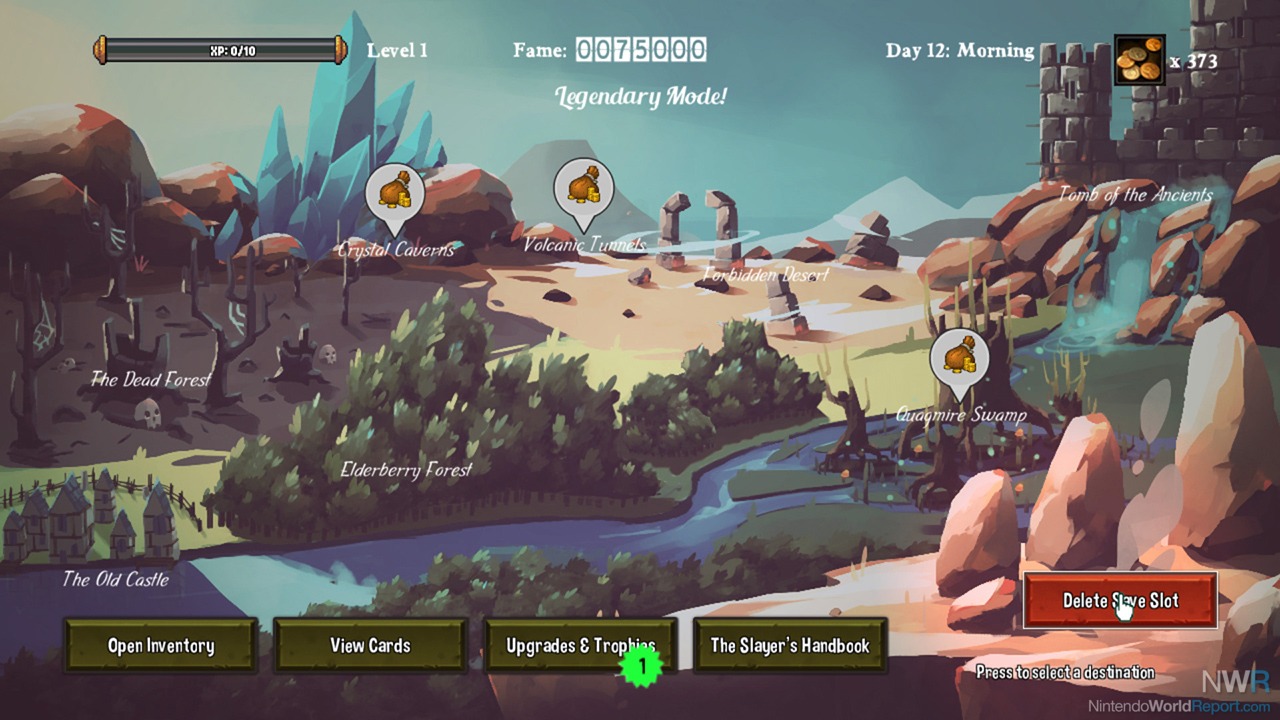 One of the best parts of Monster Slayers is the way experience is handled. There are two types of experience: standard experience and fame. Beating an enemy in a dungeon grants the player standard experience, and this allows the current character to gain more HP, AP, or new cards. However, after death, the standard experience is carried over into fame, which allows for the player to pick special perks once leveled up. These perks can do everything from receiving more healing from potions to guaranteeing a rare item drop from defeating a boss. The player constantly feels like they are getting better, which makes subsequent playthroughs easier. This constant sense of progression and control is what makes Monster Slayers so special.

That’s not to say Monster Slayers is a perfect experience. Navigating menus is extremely difficult, especially on the world map. Unresponsive controls make what should be a simple process much more frustrating than it needs to be. Additionally, the UI will sometimes overlap on itself, making certain text or tutorials impossible to read. By far the biggest issue with the game is in the difficulty curve. As with all roguelikes, the game expects you to die and restart with better gear. In the case of Monster Slayers, between each of the three dungeons, there is a major level gap that intrudes on your progress. This is especially noticeable when the player is fighting level 4 and 5 enemies in the first dungeon and the difficulty jumps to levels 8 and 9 in the second dungeon with no warning. This leaves the player having to grind the first dungeon over and over until they get enough beneficial perks that will help them stand any kind of chance in the subsequent dungeons. A great set of gear can only do so much to counter a difficulty curve this steep.

Monster Slayers is a fun and deep adventure that lets the player decide how they want to approach it. Even with a complex battle system, the harsh difficulty curve may be enough to turn many players off once they’ve completed the first dungeon. At the end of the day, the sheer joy of building a deck that suits your own playstyle is what makes this game special. Monster Slayers is one game not to overlook, if you’re even remotely interested.