The way of the ninja is best explored elsewhere.

With the recent revival of ninja-based games, such as The Messenger and Katana Zero, Shadow Blade: Reload aims to stick true to its Ninja Gaiden roots while making the gameplay more contemporary. Unfortunately, this jump to a 2.5D art style isn’t enough to make up for a lackluster experience. The game struggles to find its own identity in a world with other fantastic action platformers of its ilk. 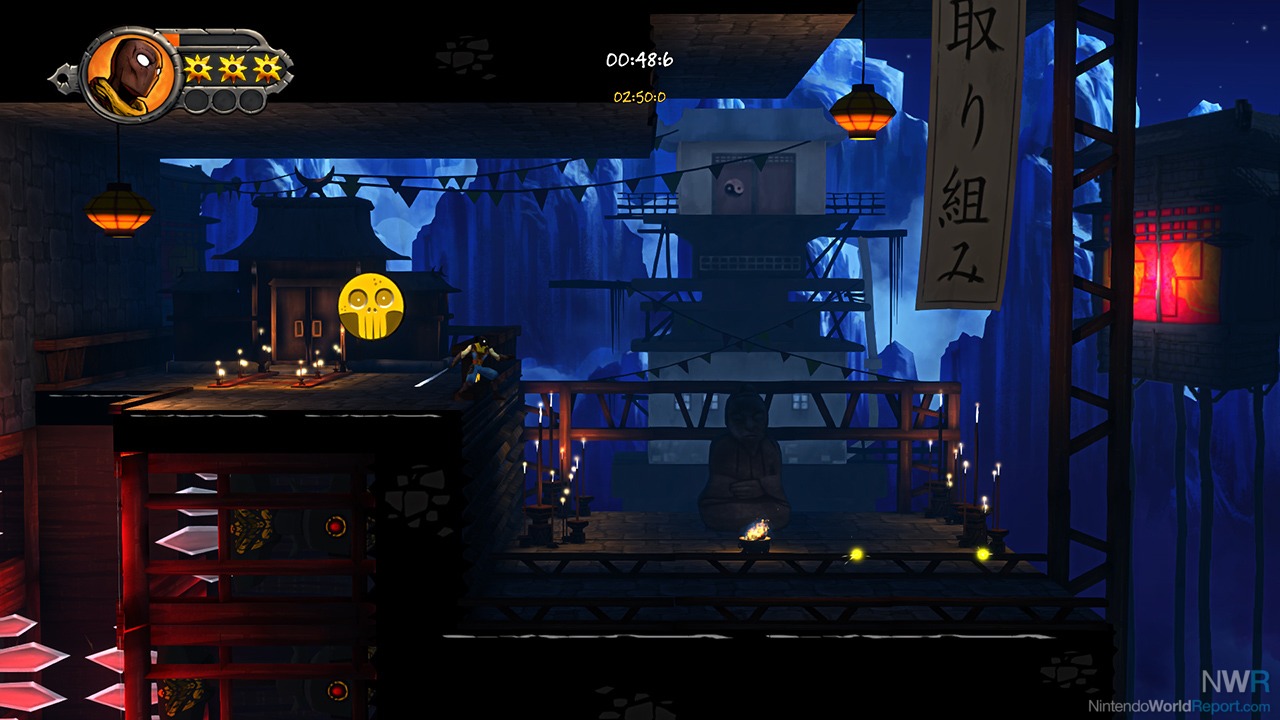 The gameplay is exactly what you’d expect. You play as Kuro, the last ninja of his clan, who is out to try and save his master while stopping the other clans from taking over. In his arsenal, Kuro has a katana for melee combat, rechargeable shuriken for ranged combat, and a kusarigama which is used to pull enemies toward him. His arsenal and fast movement speed encourages the player to get through every level as quickly as possible, which ultimately was the best part of my play time. Fast respawns and abundant checkpoints further contribute to this sense of speed. Unfortunately, the game tries to sprinkle in collectibles that drastically slow down the pace. At the end of each level, the player is graded based on how quickly they completed the level, how many sprites they found, and how many of the three kanji characters they found. This is one of the many instances where the game can’t seem to decide what it wants to do, as it encourages the player to get to the end quickly, yet punishes them for missing collectibles.

The visual style of Shadow Blade also comes off as very generic. Each of the seven worlds has a different environment. However, the individual levels within each world have the same background, enemies, and obstacles, which makes them feel the same. Some environments, like the dojo, are interesting to look at, but after six such levels, it gets a little boring. A similar statement can be made about the music. The same few songs are also repeated constantly, which became more and more apparent as I got to the later levels. There are only so many times you can play the same level with a slightly different layout before the journey is simply repetitive. 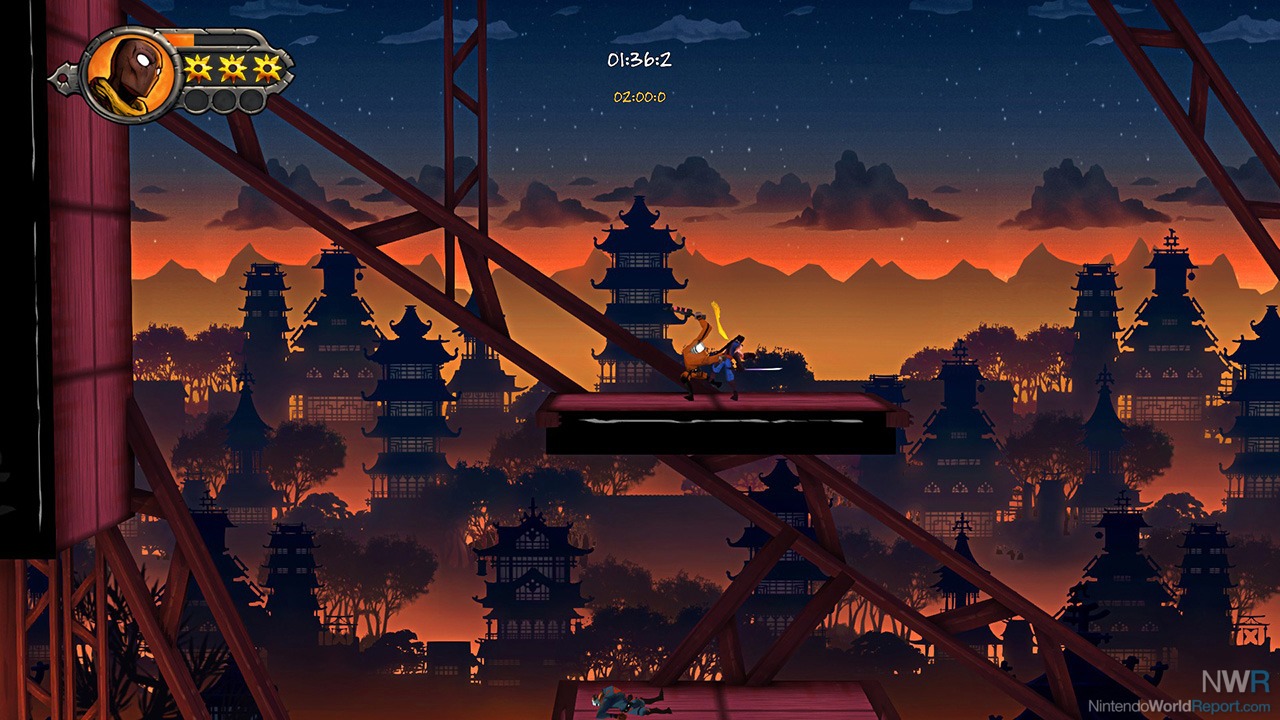 The story also suffers from being generic and intrusive. It’s told through comic book style panels that present Kuro’s journey through the world. These are very pretty to look at, but they last way too long. The panels appear at a slow rate and can sometimes last for over a minute, which hinders the overall flow. They appeared every five to eight levels and seemed to get longer as time went on. With no ability to skip or even fast-forward these cutscenes, they ended up a constant intrusion, rather than engaging storytelling.

One of the most commendable parts of Shadow Blade is the amount of content the game has. Each level has a hardcore and master difficulty that is unlocked after beating its respective world, which not only changes the difficulty of enemies—by making them smarter—but also the level layouts. This makes each level worth revisiting, even if the aesthetics and enemy types are the same each time. Additionally, the game also has a challenge mode that is accessed through the main menu. The mode plays like a more simplified experience as there are no story interruptions, no collectibles, and no ranking system. It does, however, share the same aesthetics and music as the main game, which ultimately makes it just more levels to experience. Aside from additional levels, there isn’t much more here for the player, but the extra content is appreciated. 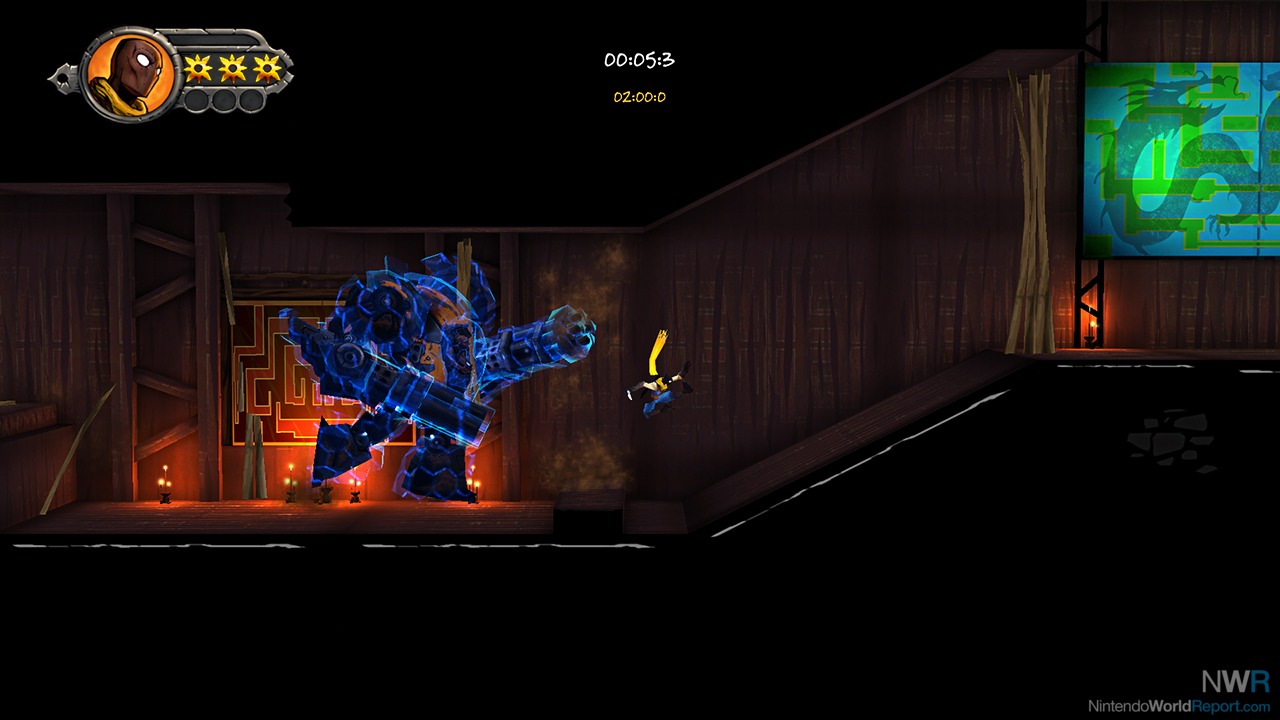 In the event that you are looking for a ninja game on the Nintendo Switch, you can do far better. Shadow Blade: Reload is not a terrible game by any means, but it doesn’t do anything to make it worth playing over others in the genre. Quick gameplay is constantly undermined attempts to slow you down with story or collectibles. There is no sense of identity, leaving the impression that this is just another ninja game for the pile. Lackluster presentation, a boring story, and repetitive scenarios show exactly why Shadow Blade: Reload can’t rival the likes of The Messenger or even the original Ninja Gaiden games. For those hoping for another great action-platformer on the Switch, you’ll want to keep looking.