Runic Games' atmospheric stab at Zelda is enjoyable despite some fuzzy portable graphics.

Hob begins quietly, as your small character starts to explore the open 3D world alongside a new robot friend. The world is in disrepair and a tiny act of kindness leads to a lost limb and a brand new mechanical appendage. From there unfurls a quest to put the land back together by completing a wide variety of environmental puzzles and exploration-focused quests. The easy comparison can be made to Zelda, but the looser structure provides a more abstract connection. Hob is an intriguing, mostly wordless journey through a planet in turmoil that rarely dazzles but remains consistently engaging and enjoyable throughout.

This is the “Definitive Edition” and while I can’t speak to what Hob was in its original form in the fall of 2017, this Switch package boasts a slew of improvements. Menus were tweaked to be easier to navigate, the structure of the main narrative was purported to be made clearer and less confusing at times, and some environmental cues were improved to smooth out rough spots. If you’re very curious, the original version is included in this package, but it appears that the definitive moniker is accurate, at least as far as gameplay goes. 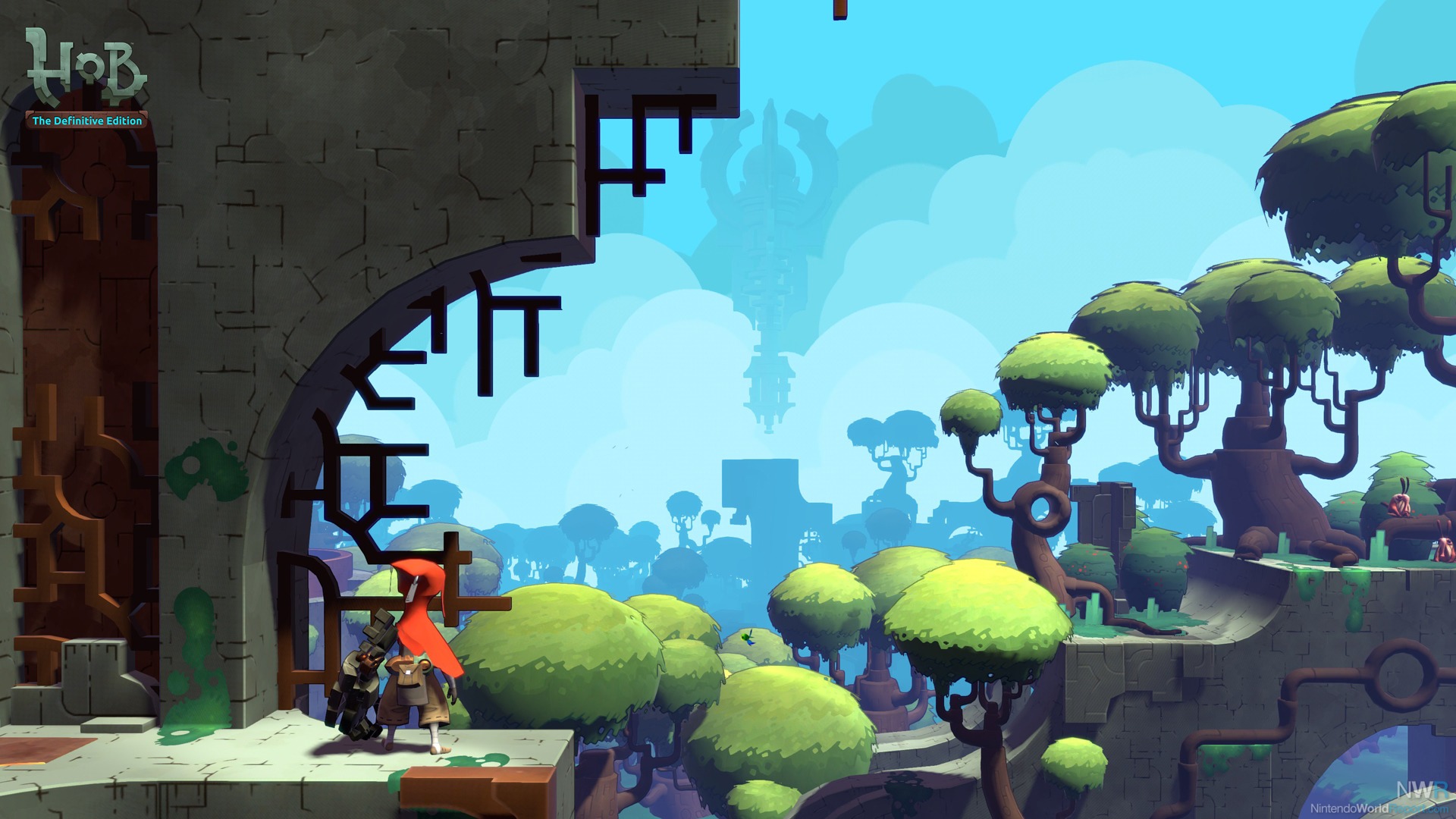 Panic Button, the devs behind the scary-good Switch ports of Wolfenstein II and Doom, are behind Hob on Switch and the results are more mixed than I’d have hoped. Docked, it runs and looks totally fine, but on handheld, the vibrant art style looks more like a blotchy mess and the overworld is sometimes hard to sort out. The only salve is that it just looks bad as the game does run smoothly on the go. In both modes, Hob is playable and competent, but even as a primarily handheld player, I vastly preferred playing this one on the TV. A lot of the immersive and intricate detail is lost on the small screen.

The game itself is driven forward by trying to reach different objective markers on the map. To get there, you have to explore the area while figuring out interwoven puzzles and accruing new power-ups and abilities. Light on exposition and handholding, it walks a thin line between being too obtuse and enjoyably immersive. Throughout the 10 or so hour adventure, I never got too off course. Fortunately whenever I did, I’d be rewarded with a health upgrade or be able to get back to the main path without much issue. What is an issue is the camera. From forced perspectives, sometimes enemies can be hiding in a space you can’t see or depth is hard to judge. Every so often, I’d miss an accessible ledge just because of the way the camera somewhat hid it on the outskirts of my view.

The puzzles that dot the landscape are primarily variations on the same few things. You do a lot of moving objects, pushing buttons, and pulling switches. It all fits together nicely, even more so as you start to finish areas and the world moves and changes to go from desolate and askew to cohesive and lively. A lot of my drive to go forward was not to get to the next puzzle, but for the moment after solving one when pieces of the world would twist and turn to fit together in a clockwork-like fashion and carve out a new path. 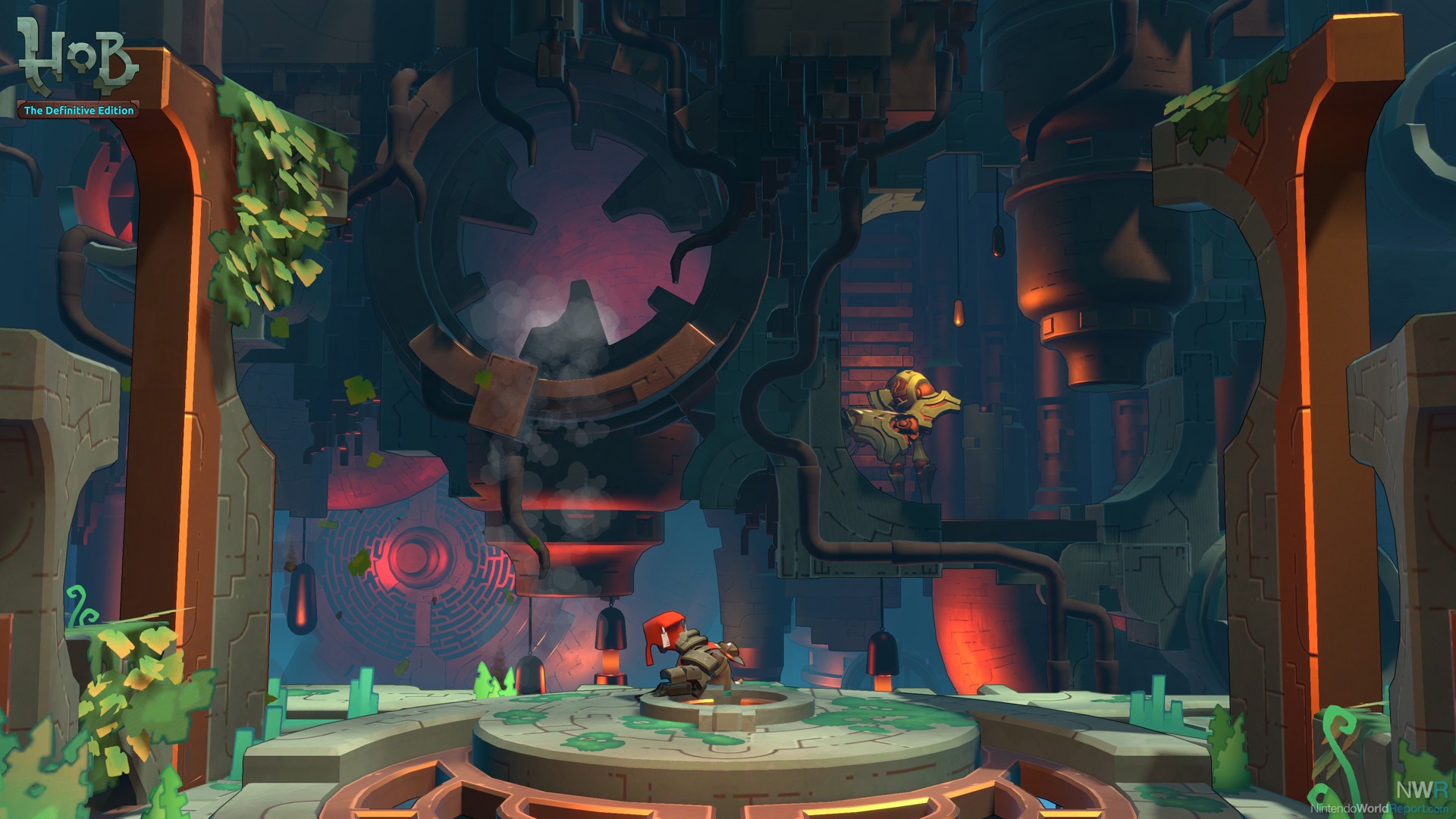 Secrets are all over the place, leading to collectibles that increase your health and stamina. New weapons can be forged using found objects and abilities can also be unlocked that grant access to more powerful combat moves. While those do add some variety to the combat, the fighting never feels fluid or fun. Using unlocked moves and objects in the world, I’d often try to avoid direct combat if I could, using things like a giant walker you ride around to mow down enemies. I’ll give some credit for letting me do stuff like that, but nevertheless, combat is a low point.

Hob is a serviceable and congenial game. I enjoyed my hours with the game, but a lot of it is more fleeting, especially whenever I played it with the muddy portable visuals. Exploration is fine here, but a minor lack of ingenuity in puzzles and combat all coalesce into making this a satisfactory but not very memorable adventure. If you can play on your TV the whole time, the visuals can overwrite those ills, but if you play mostly on the go, problems will abound.