A multitude of options keep this fossilized shooter from feeling behind the times.

I’m sure it won’t surprise you dear readers to know that, back on the N64, I played Turok: Dinosaur Hunter all the damn time—though I’m a bit ashamed to admit I never beat it without resorting to the litany of cheat codes available through most reputable gaming periodicals. I think it’s instructive to useful to acknowledge the weight of the expectations put on Turok in 1997: it was Iguana’s first major game and they pushed the N64 to its graphical limits, including real-time lighting, particle effects, and even motion capture. But even more critically, Acclaim Entertainment was in dire financial straits and had bet the farm on Turok. The high price of N64 games and the fact that Turok was rated M meant that it was a real gamble.

Obviously, that gamble paid off. Turok was a huge success, not just because of the graphics and gunplay, but also the inventive level design and the first (to my knowledge) implementation of two-stick control in a console shooter. I remember this feature was widely touted in previews: players aimed with the Control Stick and moved with the C buttons. An awkward solution to the mouse-and-keyboard standard, sure, but it eventually felt natural. Reviewers criticized the oppressive fog (which was Iguana’s solution to prevent constant pop-in) and the platforming—Turok did a lot of jumping, and it wasn’t always enjoyable.

Night Dive Studios released a remastered version of Turok: Dinosaur Hunter for Steam back in 2015 and on Xbox One in 2018. Now it’s been released on the Switch. How does it hold up? 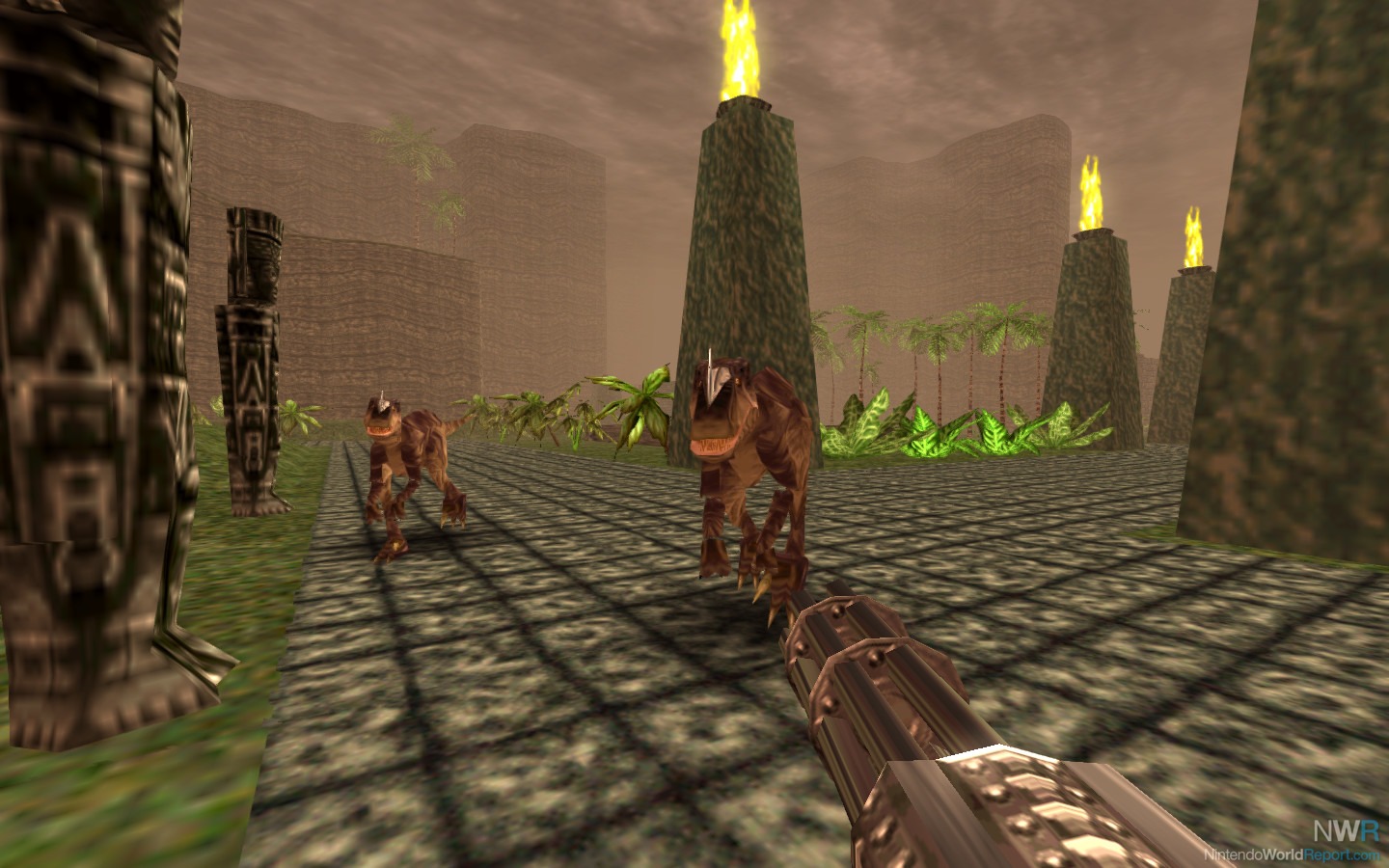 Turok still manages to impress even as shooters have advanced in the—dear lord—twenty-two years since its N64 release. It’s not all nostalgia, either: Night Dive has loaded this remaster up with more options than you can shake a thagomizer at. Among many other things, you can turn the fog off entirely, change the color saturations and bloom lighting, customize the controls, change your depth of field, toggle whether or not Turok switches to guns as he picks them up, change the blood settings, tweak movement and aiming sensitivity, swap controller types mid-game, turn off the crosshair, etc. There’s a cheat code menu where you can toggle individual cheats on or off. Turok has achievements now, although using cheats disables them. The only thing it’s really missing is restore points, which would make certain areas far more tolerable.

The game looks just as blocky as it did back on the N64, but at least the blocks have hard edges now. Textures have been cleaned up. You’d think removing the fog would make the game significantly easier—maybe giving you the ability to pick off enemies from afar, but that’s not really the case: guys with guns will just shoot you from just about any distance now, so you could say removing the fog was a benefit to you and also your attackers.

Personally, I still think Turok is a joy to play. The level design is spectacular, featuring all sorts of branching paths (some of which aren’t on the map) that always lead to something useful and tend to loop back to where you’d initially left the main trail. Except for the weirdly-structured fourth area, each level is huge and easy to get lost in. The map isn’t as useful as you’d think, and its overlay structure unnecessarily competes for your attention. Your goal in each level is to find three or four keys that are used to access other levels in a central “hub” area. You’re generally left to your own devices in finding the keys—which can be a little frustrating sometimes—but if you explore thoroughly, you shouldn’t have too much trouble.

Your increasingly-ridiculous arsenal is fun to play with, and most guns are situationally useful. Even Turok’s giant knife remains the best way to kill beetles and giant dragonflies even into the final areas of the game. Ammo and health are never hard to find, usually sprinkled liberally around the perimeter of every area, within structures, or dropped by enemies. Rarely-found backpacks can double your ammo capacity. Each level has two unique obstacle courses accessed through blue portals that tend to dole out nice rewards. Ironically, in a game that gives you a minigun, energy rifle, grenade launcher, and something called a “fusion cannon,” it’s the lack of a sniper rifle that now gives me pause—now that the fog can be disabled, it would be super useful. 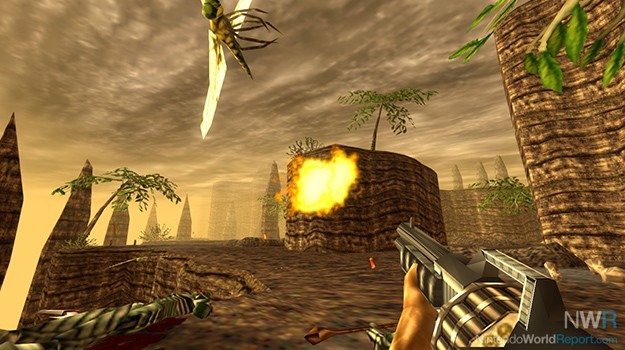 There are some things I genuinely dislike about Turok, and they all stem from its original design. I can’t stand that enemies continuously respawn, as It means that you can’t clear out an area and then explore at your leisure—you’re always engaged, wasting ammo, when all you want to do is find a switch or navigate a cave. Another source of frustration is that dart-blowing tribesman will hit you even if you move out of their way. Also, and this seems important, ALL FOUR BOSS FIGHTS ARE TERRIBLE. The final fight, especially, is a giant middle finger: if you manage to find all eight well-hidden pieces of the allegedly world-shattering Chronosceptor weapon (one per level) in the lead-up to your showdown with the Campaigner, it should kill him immediately. Spoiler alert: IT DOES NOT. It’s not even the most useful weapon that battle. Finally, save points are not nearly common enough. Checkpoints are, but I’d like to save my game more often than once or twice per gigantic level.

I should briefly touch on the jumping. Generally, the jumping feels good in normal, low-risk situations that don’t demand it, but when you’re trying to make a long jump or jump between columns, it’s not great. With long jumps especially, Turok is the 3D version of Castlevania: you have to jump pretty much immediately before you’d fall off the platform and hold down that button for dear life lest you come up short. As for column jumping, I’m not sure how the end of level 3 got through QA/QC. All that said, Turok and its sequels clearly paved the way for Samus’ excellent jumping in Metroid Prime.

Turok: Dinosaur Hunter Remastered is the best possible way to experience this N64 classic, either on your TV or in Handheld/Tabletop Mode (where it performs flawlessly). Turok influenced a lot of first-person shooters that came after it, and it’s still very enjoyable in 2018—thanks in large part to Night Dive’s boatload of options. You don’t wind up hunting a lot of dinosaurs, but you do manage to fight a Dimetrodon that has a minigun strapped to its back, which makes up for a lot.

I was just itching to play this again and was considering the Steam versions, so glad it dropped for Switch!

How are the controls? I was hoping they would add some gyro functionality like other popular Switch FPSes.

Any word on the sequel coming to Switch? That one has multiplayer, so would be a great throwback party feature since most FPS titles on Switch do not support local play.

Just learned that they are also porting #2, which is great news! Looks like the studio also did a remaster of Forsaken, and are looking to remaster Turok 3 down the road. Would love to play all of these on Switch.

It should come as no surprise that I have it on Steam already.

The controls are great--I currently have it set to ZR for shooting, L & R for weapon cycling, and B for jumping. Y opens the map, but I rarely use the map because it's not super helpful most of the time. There is gyro control; you can tweak the sensitivity. I don't use it that much. I forgot that Turok features pretty generous hitboxes for incoming enemies.

Thanks Halbred! I'll be checking the game out this weekend.

I already played the original a lot, so I'll be waiting for a sale on this one, but I'm glad it's on Switch. I played a lot less of 2 so that's the one I'm looking forward to getting into.

I noticed you mentioned frustration with the jumping.  In the N64 version, the hints section of the manual instructs you to learn the diagonal jump, which allows you to jump further than you can normally.  Would this have helped?  Here's a link to the manual, the hints section is on page 20:

I'm pretty bummed out! I thought it was releasing on Friday for some reason and this was going to be my game for the weekend but it releases...Monday.  :o