A gritty, cyberpunk narrative game that is captivating but just misses happy hour.

At first glance, the art and style of The Red Strings Club screams adventure game and reminds me a little of the original Full Throttle from LucasArts. However, in terms of gameplay, Red Strings is very much a cyberpunk narrative game with a few gameplay sections thrown in. While the story and writing are pretty compelling, the lack of achievements and simplistic gameplay hold this one back from being a must-play.

The Red Strings Club takes place in a future where corporation Supercontinent Ltd, already in the business of genetic implants, is preparing to release a system called Social Psyche Welfare (SPW) that purports to eliminate negative emotions from society. Throughout the story, you play as three different characters: Brandeis, a hacker and revolutionary; Donovan, a bartender and information broker; and Akara-184, an android capable of simulating empathy. Each character is associated with a new type of gameplay, but it’s the side characters you meet while playing as Donovan that really shine. 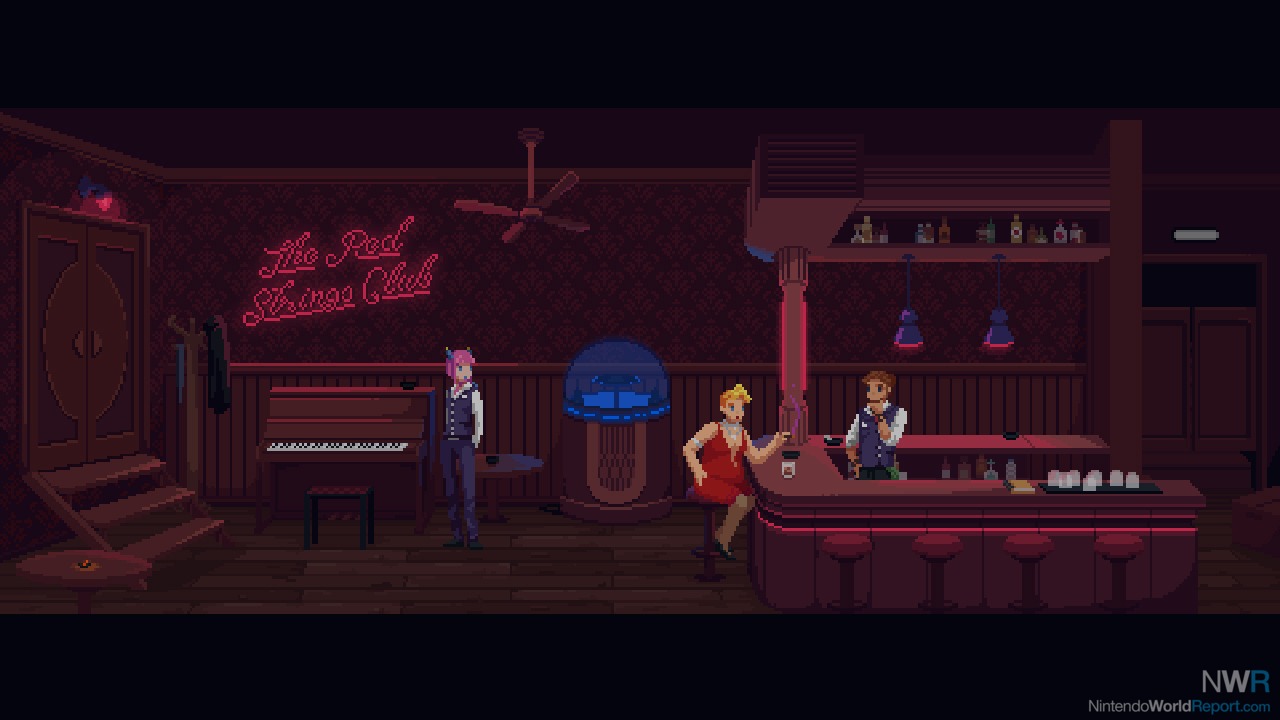 Technically, you spend most of the game playing as Donovan’s unseen assistant. After playing a simple mini-game—where you blend spirits to appeal to your patron’s different emotions—you serve drinks that push them to reveal information about Supercontinent and SPW. As an information broker, Donovan uses various persuasive techniques to encourage people to share more than they may have intended, and you make dialogue choices regarding the questions and avenues of inquiry you want to pursue. It’s possible that a certain question posed to a particular character will completely shut down the conversation, and it’s not always easy to figure out how to glean the most information from each exchange. You are given opportunities to concoct a new beverage and try a new tactic, but it can be hard to know when you should do this.

Akara’s segment is actually one of the first that you experience, but the transition to it is abrupt and happens before you really understand how everything works or why you are doing it. Playing as Akara, you are inside a genetics lab creating new implants for individuals that have requested them. By reading a brief description of each client’s demands, you attempt to discern the specific implant that they need. You then craft the implant by playing a pottery-type mini-game where you transform a block of genetic material into a specific shape. After completing her segment, Akara becomes a hostess at Donovan’s bar and gives quizzes to him that test your memory and understanding of the conversations you have with patrons. 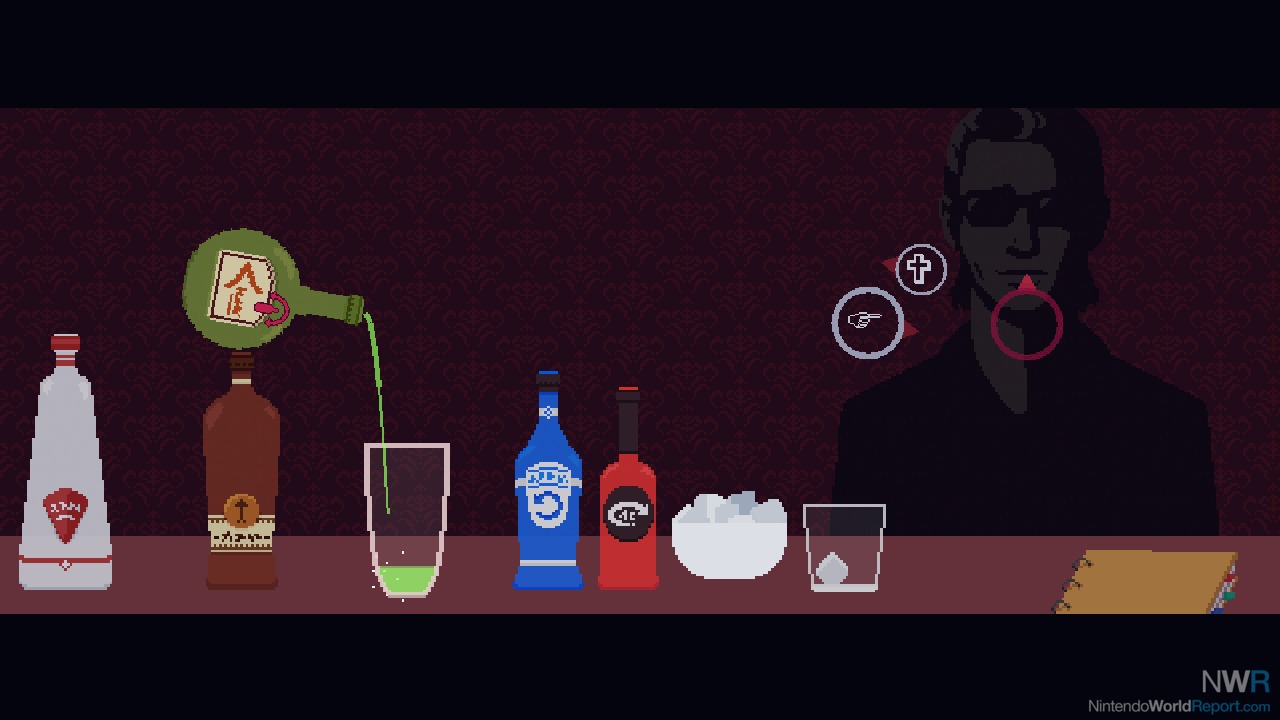 You don’t really play as Brandeis until the end of the game, where you infiltrate Supercontinent and use a special device to synthesize the voices of other characters in the story to make phone calls and deceive various people. His segment isn’t as compelling as the others because you spend most of it just dialing telephone numbers and trying to put together the final pieces of the puzzle needed to prevent the release of SPW. There is also a small segment in the middle of the game where I played as Brandeis and tried to stop a character from committing suicide, but it isn’t explained well and ended quite abruptly, at least for me.

The aesthetic and presentation of The Red String Club are decidedly cyberpunk and crime noir. There is an ambiance and warmth to the club where Donovan serves drinks that contrasts with the darkness and gloom of the world outside, and the cavalcade of characters that stroll in both look and act as they might in a detective novel. The sound and music didn’t strike me as being memorable, but the simple graphical style does much to keep the focus on the story while harkening back to adventure games and interactive fiction of the past. 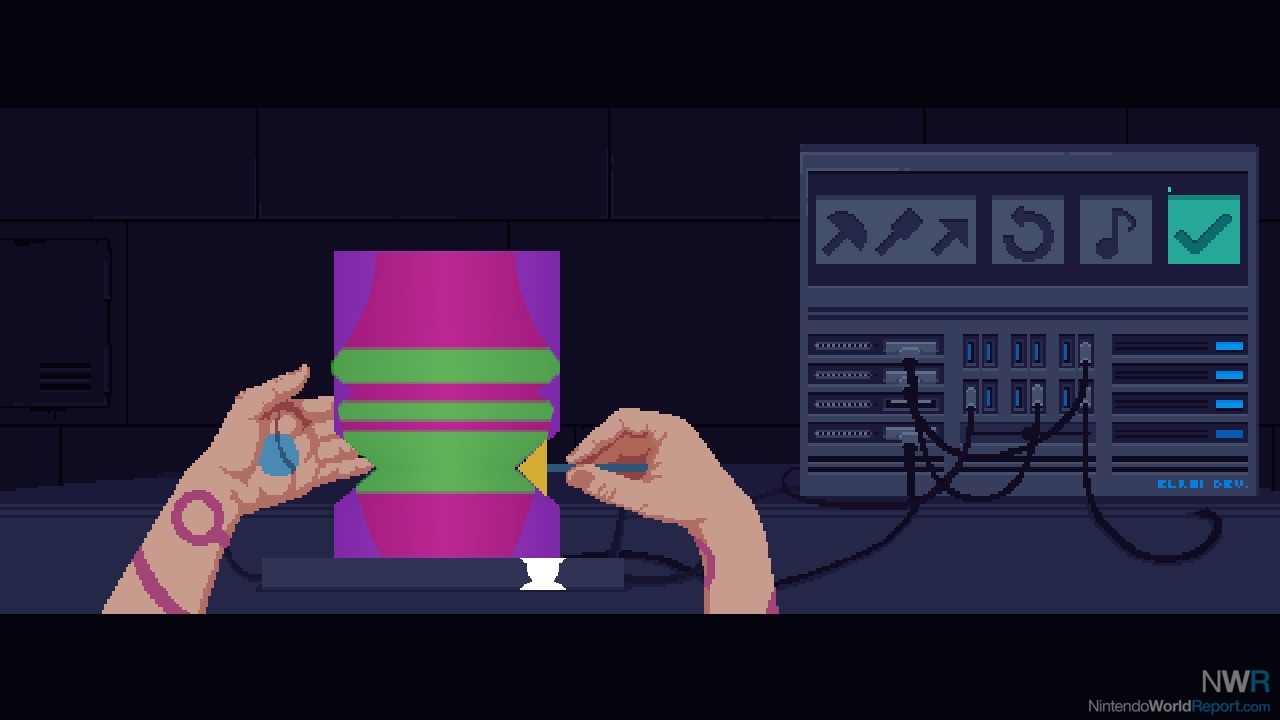 In terms of replay value, the Switch port lacks the achievement system of the 2018 PC release, which is a shame because it’s the type of thing that would encourage me to dive right back in. There is a timeline that you can access that shows the path you’ve taken through the game, and it remains even after your first playthrough, so you can try out different dialogue options. Unfortunately, however, you can’t just warp back to a particular set of choices to try something new, but there is a fast-forward button that makes additional playthroughs a little faster.

At last call, I decided to order a scotch on the rocks. I wanted something that would linger on the palette much like how I’ve been thinking about The Red Strings Club since finishing it. The memorable characters and familiar cyberpunk story of a mega corporation attempting to “fix” humanity make Red Strings an enjoyable ride. The gameplay sections are largely forgettable and serve more as distractions with just a dash of purpose. Elements like your current objectives and path through the story aren’t really explained, and it’s possible to feel lost or without purpose due to a lack of tutorials or direction. That said, I would still heartily recommend The Red Strings Club to fans of cyberpunk or crime stories or those who enjoy narrative games with a fair amount of choice and minimal gameplay. I’m not sure if I will be returning to this bar right away, but I’ll certainly be thinking about it.